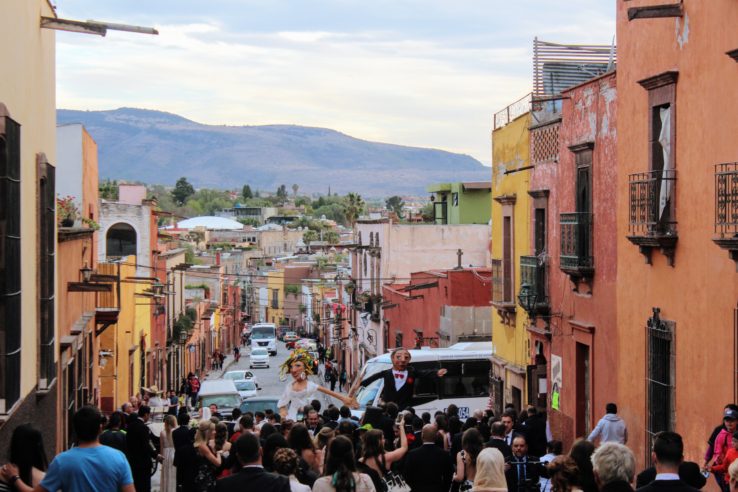 For the first time in my life I don’t have a physical home to return to. All the stuff that I ever owned is either in my suitcase, at my parents house or sold and given away. For 6 months now I don’t pay any monthly bills. I don’t have long-term rental contracts. I don’t receive spam calls – an unexpected benefit of changing the sim card every now and then.

We have been traveling ever since we landed in Guadalajara in November last year, only we have been doing it slowly. In each place we rent an apartment for a month or so and “settle down” – which means stocking our fridge with groceries, and finding nearby playgrounds. During the day I work, but evenings are for walks and exploration of the surrounding neighbourhoods (when you have a 3-year-old with you, staying home is not an option anyway). On the weekends we take day trips, go to museums, meet with locals. After 6-8 weeks we pack our bags and move to the next city.

As we discovered, this type of slow traveling is different from being a tourist. You get to have something akin to a normal life with a sense of routine. Seeing the same people day after day, there are more opportunities for making connections. You have less net time to actually travel, but more time to take in and digest all that is around you. And more importantly, you get to learn, care and shake off your anxieties.

Half a year ago I knew virtually nothing about Mexico. My conception of the country was based on a collection of short stories I read as a child and a couple of Hollywood movies taking place on the Mexican border. Today I can tell Taco de Pastor from Cochinita Pibil, Tenochtitlan from Teotihuacan and Quetzalcóatl from Kukulkán.

I also can hold a simple conversation in Spanish. Could I learn all of this from my home in Haifa? Of course I could. But here’s the thing: I wouldn’t. Living in a world with an unlimited access to infinite amounts of information, our intellectual and cultural enrichment isn’t dependent on access to information, but on a sense of urgency. I have hundreds of articles in my read-it-later app which I will never open. I have many dozens of books in my Amazon wishlist which I will never read. What in the world would make read books about the Mayans or the Spanish conquest of Mexico? Sure, both are interesting subjects, but how would they break into my bubble? What would make me commit enough time to learn about them?

Slow traveling does that. After spending enough time exploring the Mayan ruins, you can’t help but become curious about the culture and the people who built them. After seeing time after time the economic gaps between the light-skinned and the dark-skinned in Mexico, you naturally start wondering about the history of the country. In a world saturated with a short-term stimuli resulting in only a passing interest to anything, traveling is an exceptional way to rekindle our natural curiosity, and be guided by it.

We all have a set of identities which allow us to understand our place in the world. And when we live a sedentary life, these make perfect sense. “I am an Israeli, I am from Haifa, I speak Russian, I am a software developer working in startups, but I want to move to product management”. We are so used to these identity shortcuts that sooner or later we fall into a trap of believing that this is who we are. But when traveling becomes your life, suddenly things become much more fluid. “Is it unimaginable that we would live some day in Mexico?” No, it isn’t. “Couldn’t I be a part-time photographer some day? Or a travel blogger or a reporter? And maybe you could work for a NGO here, or open an online business?”. Sure, most of those thoughts are just that… thoughts that will never materialize. But when you start having those, for better or worse, the sense of your place in the world loses its firm hold on you.

But fixed identity isn’t the only thing you start to letting go. There are also all those worries about the future, that usually are hard to shake off. “So I am 35, which means I have 35 years till retirement. But they say that software developers lose their shine after 40, so for how long would I be able to work? How much should I save for retirement? What would I do, when retired? We probably should save money to buy an apartment, that’s probably the best investment.”, etc, etc.

But when you travel, the perspective changes. For example, you realize you don’t need millions saved to retire comfortably – there are enough places in the world where you can live with relatively modest means. But more importantly, you stop obsessing about these things. Insurances, investments, career opportunities, promotions, retirement. And it’s not that I am suddenly ready to go live somewhere in a jungle. It’s just that these worries deflate. Maybe they do because you just don’t have enough time for them, because you are too busy trying to figure out this new place and its people.

Or maybe because your time measurement units change. It’s no longer “years till retirement”, “months till I can ask for a raise”. When traveling, time and space morph, as they do in relativistic physics. Life becomes much more spacious and granular. You are no longer consumed with futile worries about your life 10-20 years from now. You think about this year, maybe the next one. What countries are we going to visit? Which cities are we going to live in? How many pyramids, nature reserves, lakes, streets, stories, songs, friends are we going to see, hear, meet?

In such coordinates, even anxieties over old age and death – those life’s constant companions, have trouble manifesting themselves.

Something happens when you spend enough time in a country. In the faces on the streets, in their happy, bored, tired eyes you start seeing actual human beings. Not masses. Not some abstract people, too removed from your reality to comprehend their full actuality. People as real and nuanced as you are. That work hard, that love abundantly, that sing songs, that get drunk, that have a complex, painful national history, not less tragic or poetic than yours.

And then you make friends. And suddenly you get news in your Facebook feed about the strife of Uber drivers in Merida or an explosion near Mexico City. Since these are local news to you, you give them more than a passing thought. You have time for things beyond touristic attractions – for the daily life, for what occupies people who live here.

You see a nursing woman trying to make a living selling snacks for 50 cents each, and you wonder how much of these she needs to sell to make even a modest living. You see a child doing homework under a dim streetlight at 10pm, next to his father who is selling some trifle at the entrance to a metro station. At what time would they finally go home, you ask yourself.

You understand that you can’t change anything, but you can’t ignore it either. Not only your mental map of the world expands. Your empathy network grows.

The more you see, the more is left to see. You arrive to Guanajuato, a city you have read so much about, only to hear people say: “You haven’t been to Oaxaca? You have to go there”. The more pieces of the puzzle you uncover the more are left to turn over. And even though our pace is slow, we are still constantly on the move. It’s exhilarating but also sometimes frustrating.

Behind every local holiday, song, street name there is a story you don’t have time for. Friendships don’t have enough time to develop. Learning Spanish is haphazard – there is no time to visit a local language school. You empathize, but don’t have the weeks and months to do something about it.

Some places beg for you to return, to read their pages beyond a brief overview. Mexico City is one such place. And maybe one day we will. But for now, I am thankful for the introduction.