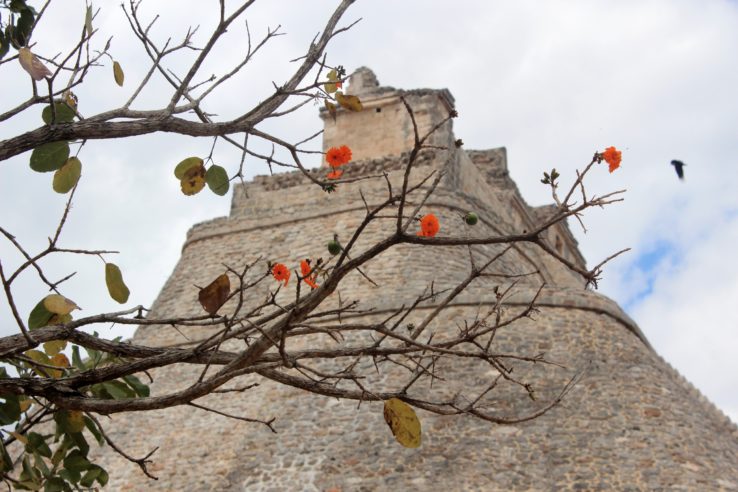 As everyone else visiting Yucatan, Chichen Itza was our first encounter with Mayan civilization. Advertising works – if something is recognized as a New World Wonder, you are going to go there first, no matter what. But while Chichen Itza may be the most famous Mayan site, the less-known Uxmal, in my view, is even more breathtaking.

An hour drive from Merida, Uxmal is an ancient Maya city of the classical period. Founded about 500 A.D, it was the most powerful site in western Yucatán, and for a while, in alliance with Chichen Itza, dominated all of the northern Maya area. At its peak, some 15,000 people lived here. After the Spanish conquest of Yucatán, Uxmal was still an inhabited place of some importance into the 1550s. As the Spanish did not build a town here, Uxmal was soon after largely abandoned.

After getting two tickets in two separate booths, and passing a small photo-exhibition of the excavations at the site, the Pyramid of the Magician suddenly appeared behind the trees, demanding our full attention. 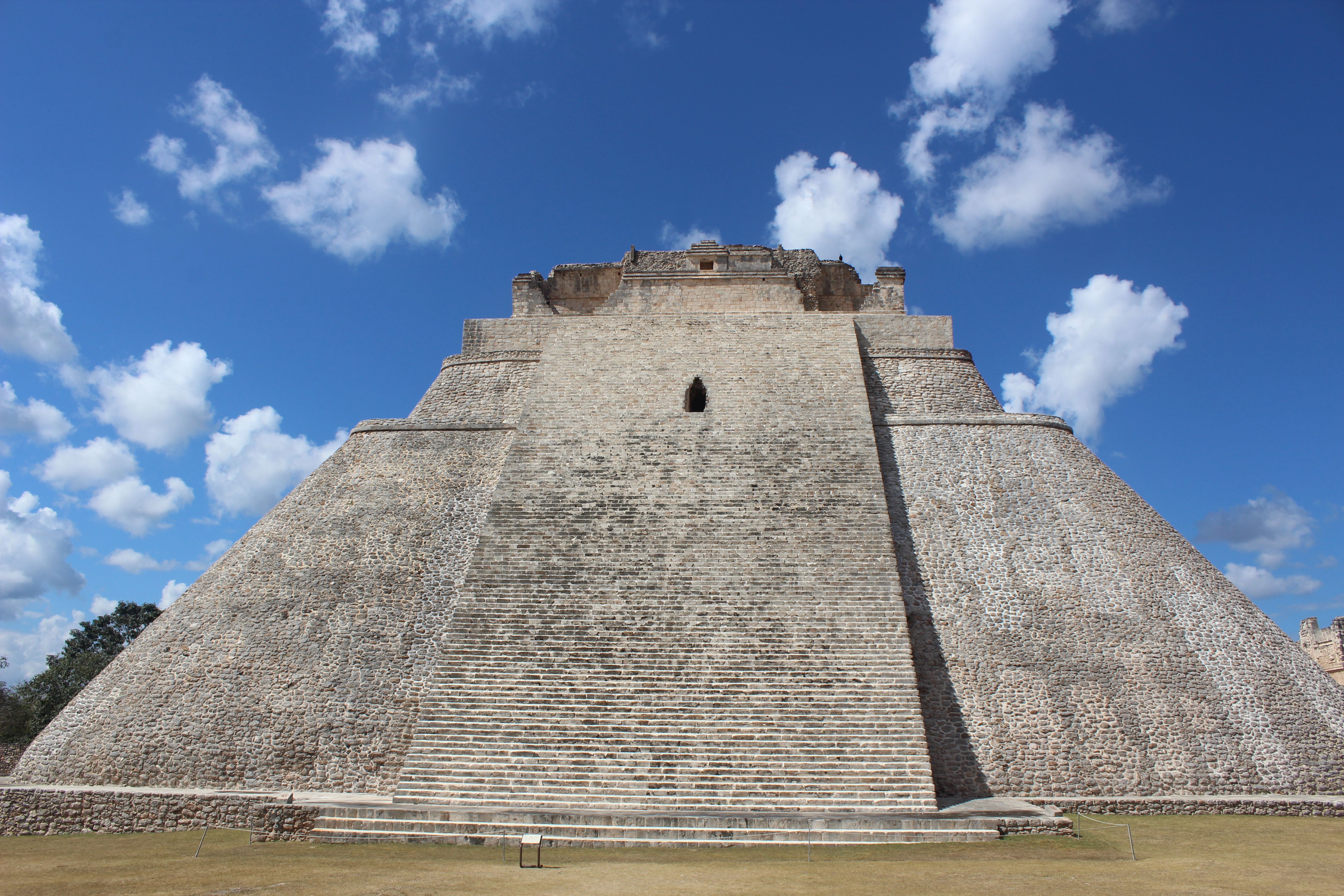 It’s size is enough to take your breath away. But only after moving sideways, you realize how unique it is. While it’s a stepped pyramid, as all Mesoamerican pyramids are, it’s unusual among Maya structures in that its layers’ outlines are oval in shape, instead of the more common rectilinear plan. 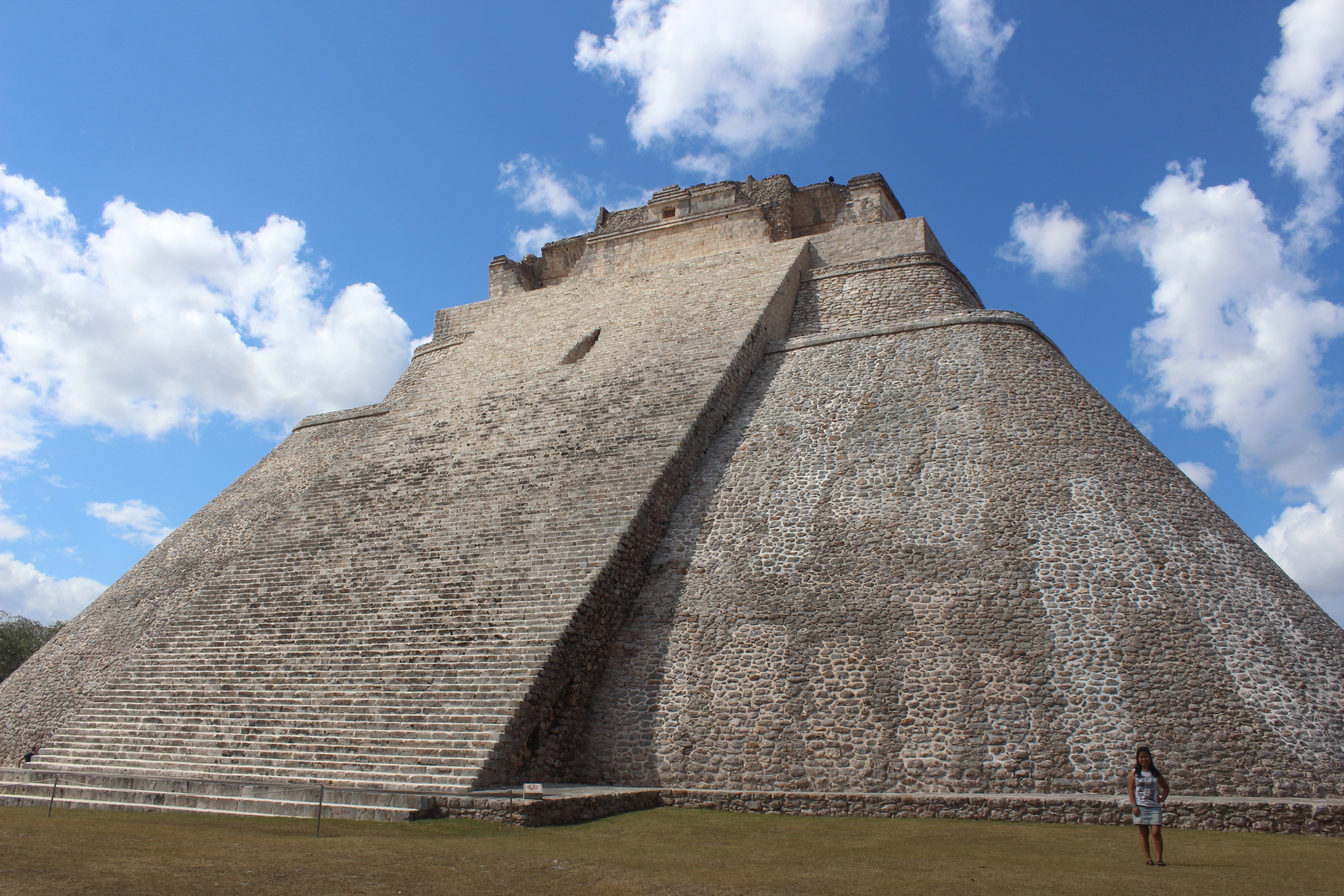 There is just something magical to these curly, pregnant features, making the pyramid seem alive, breathing. 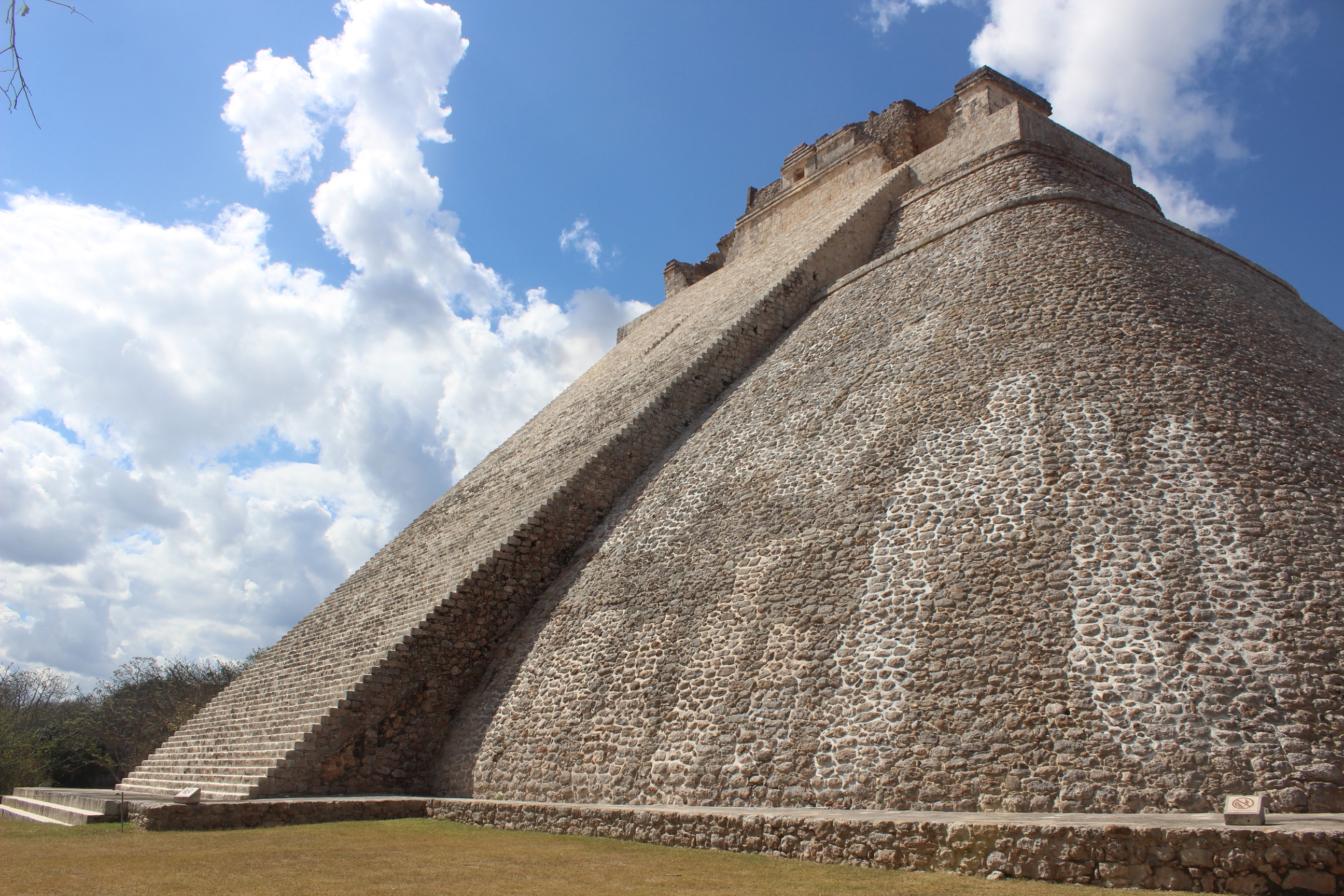 Mesoamerican pyramids primarily functioned as places of ceremony and worship rather than as tombs as in ancient Egypt. Pyramid of the Magician holds a sanctuary chamber at its apex from where rituals were performed

The structure is featured in one of the best-known tales of Yucatec Maya folklore, el enano del Uxmal (the dwarf of Uxmal), which is also the basis for the structure’s common name. According to one version, the pyramid was magically built overnight during a series of challenges issued to a dwarf by the gobernador (ruler or king) of Uxmal. The dwarf’s mother (a bruja, or witch) arranged the trial of strength and magic to compete against the king.

West of the Pyramid of the Magician is the Nunnery Quadrangle, consisting of four rectangular buildings with 74 individual rooms. It might have been a palace or a residence for students, priests, or soldiers. 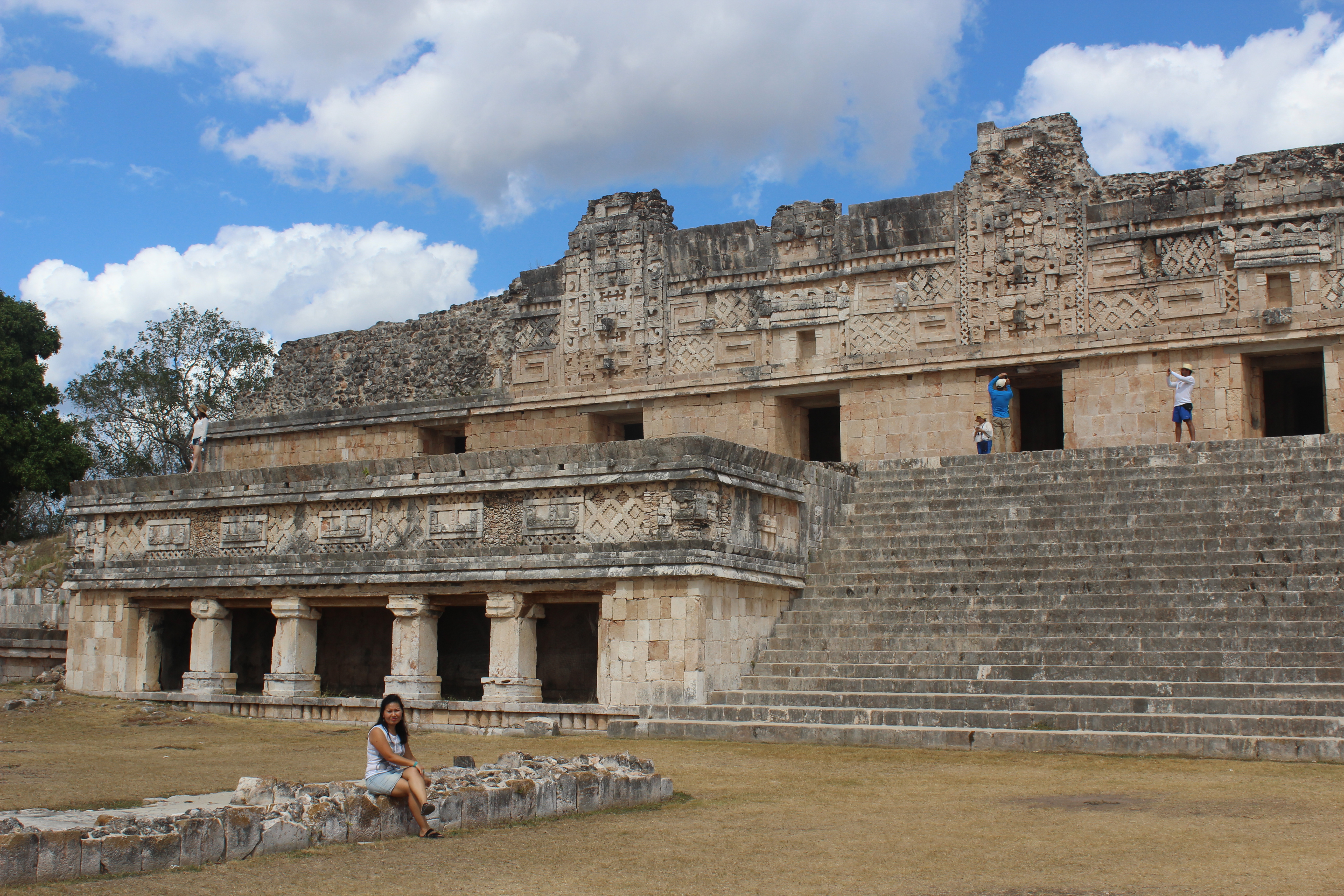 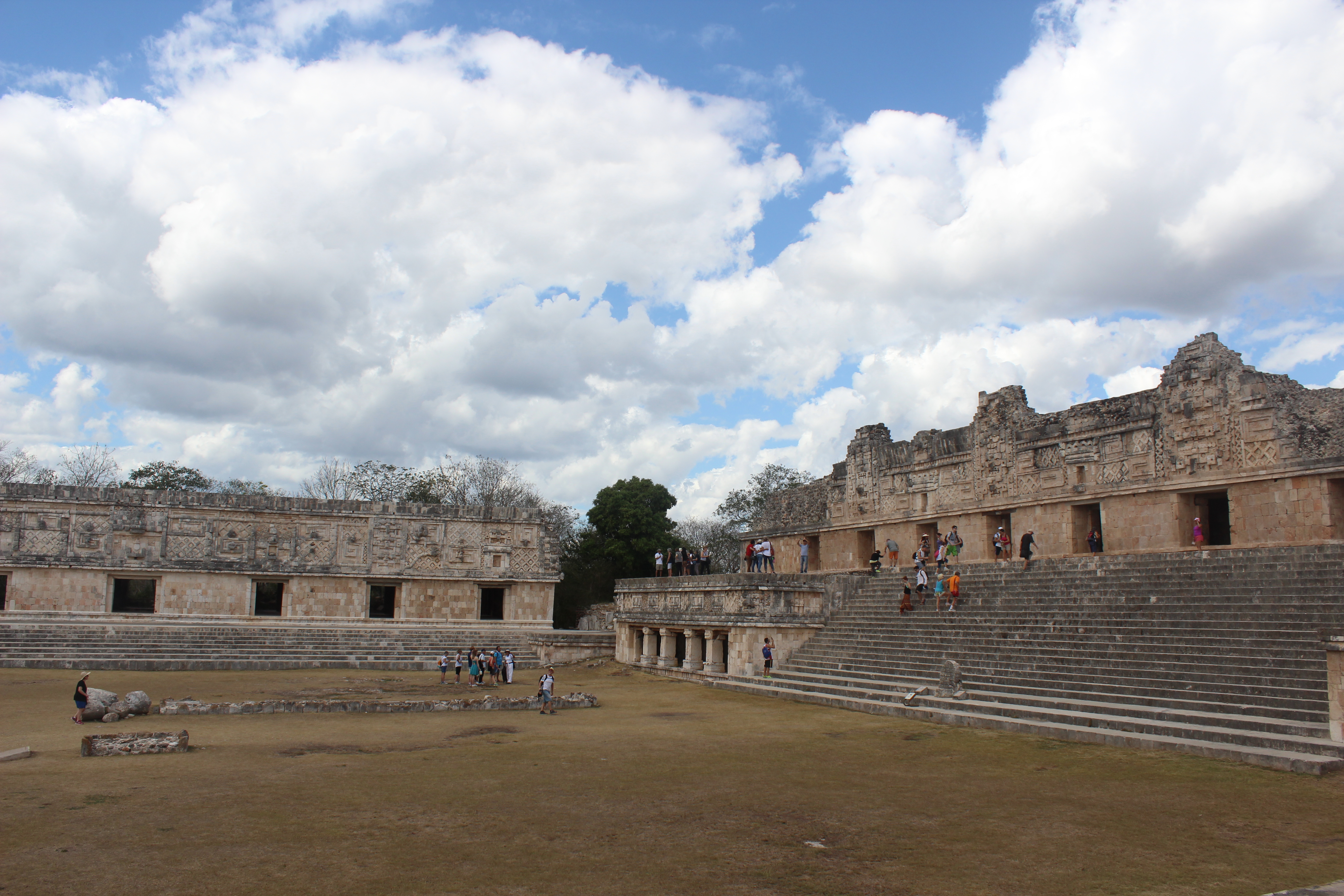 The “hooks” on the side of buildings are noses of the Mayan rain god Chaac, noses representing the rays of the storms. Its elaborately carved façades on both the inside and outside faces are unlike anything we saw in the much more minimalistic Chichen Itza. 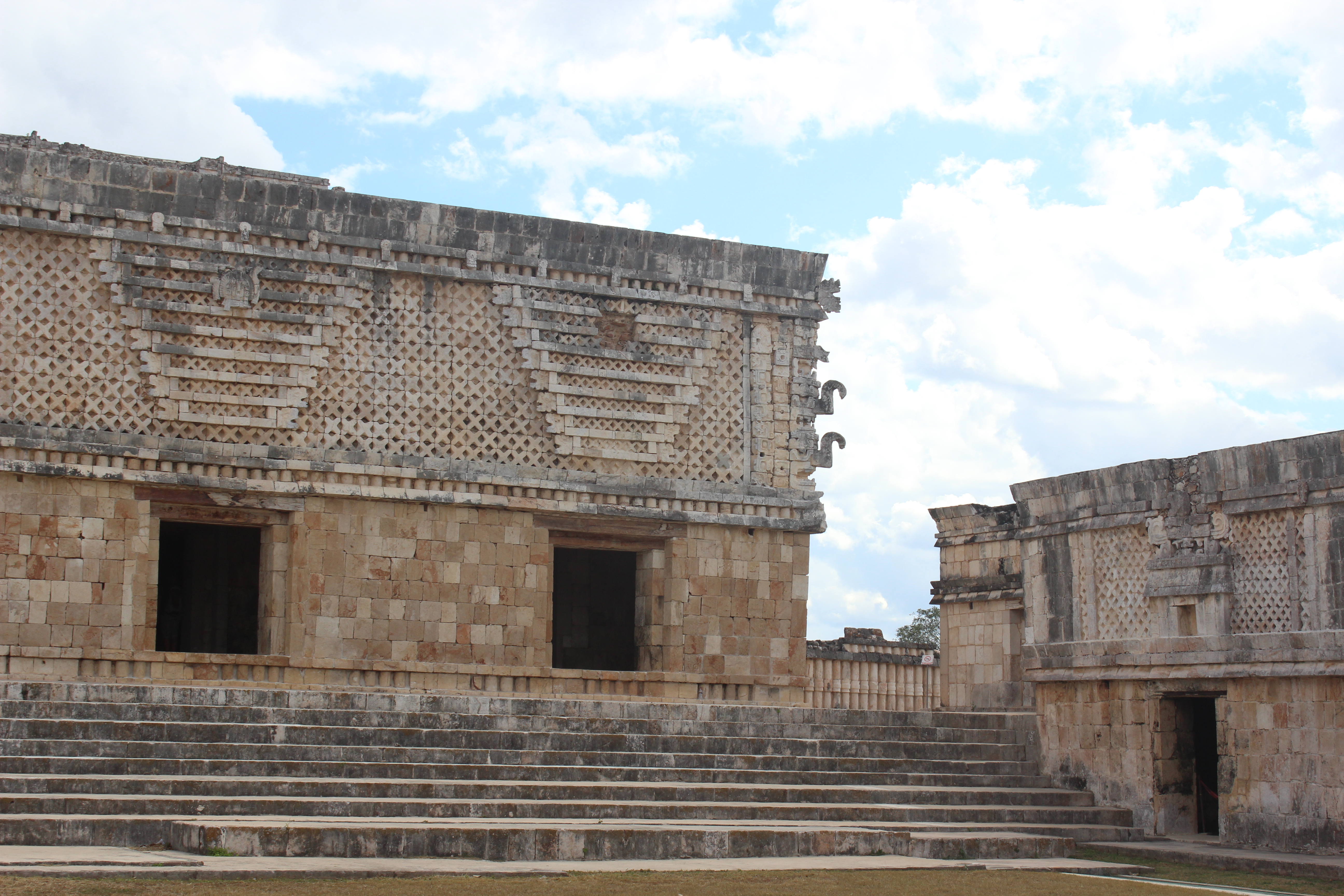 Continuing our tour, we passed through a large court, the kind used throughout Mesoamerica to play a ball game (juego de pelota in Spanish). The game used a rubber ball which had to be passed through rings. 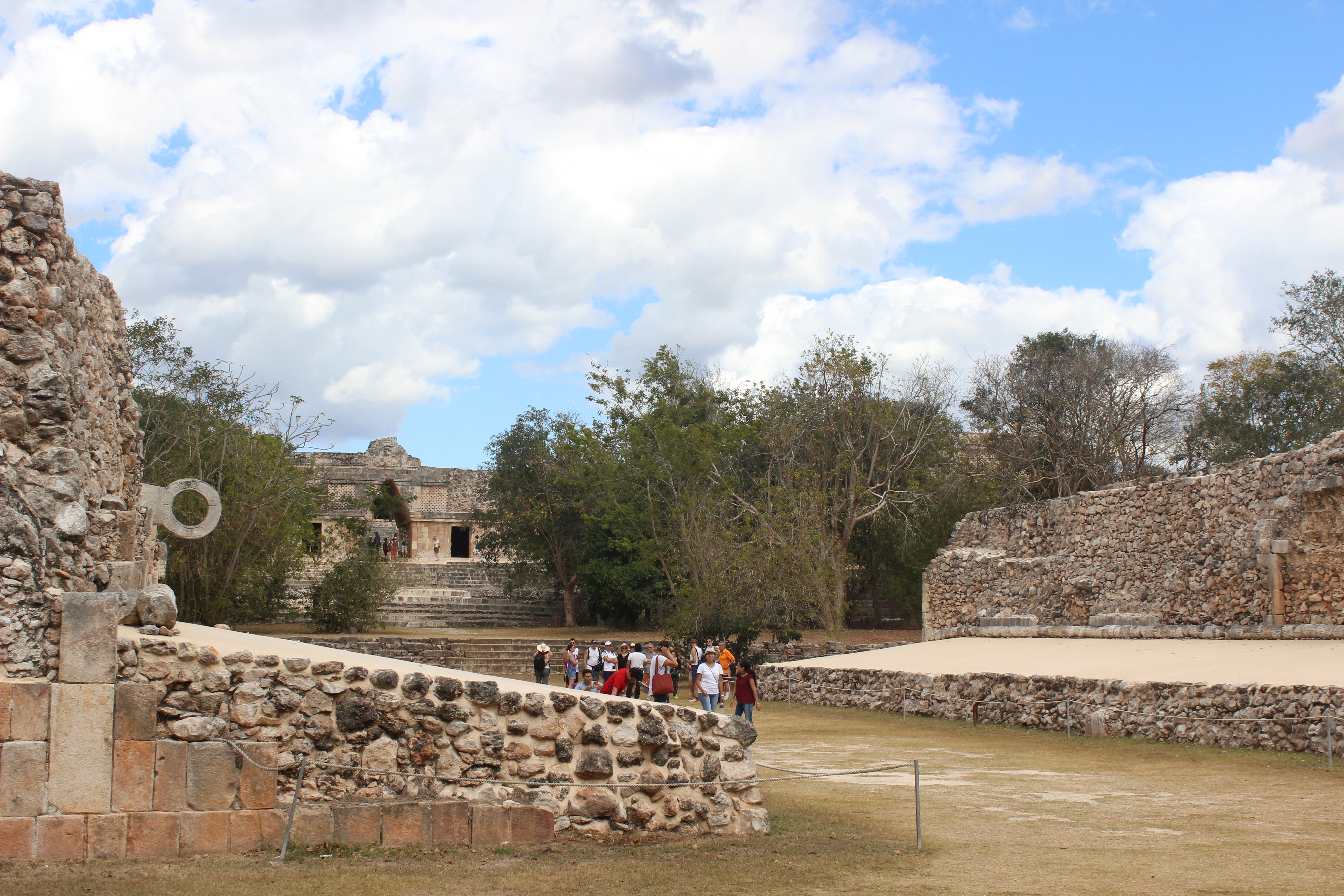 Beyond the ballcourt lies the Grand Pyramid. Climbing it offers an unparralel view of the site. 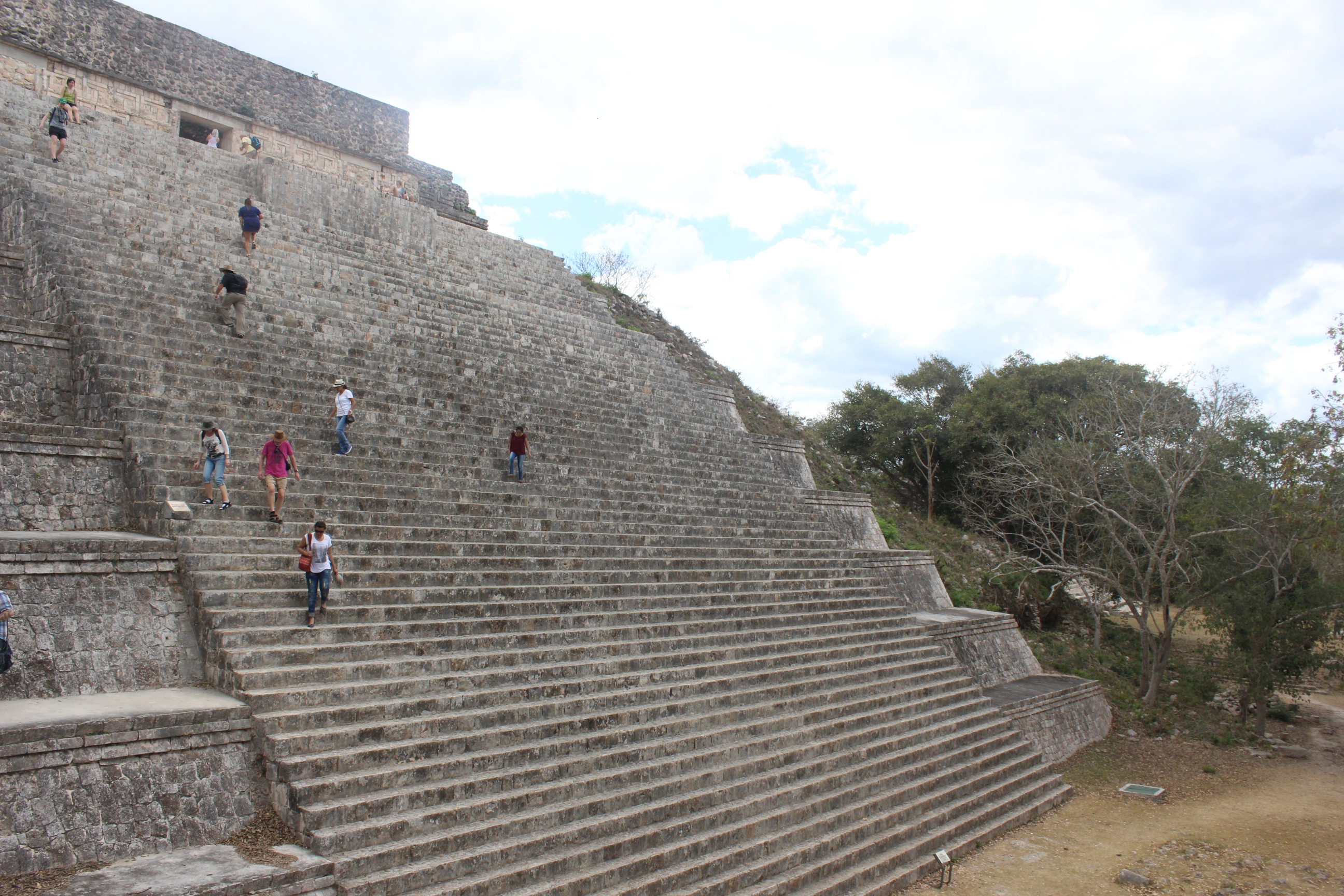 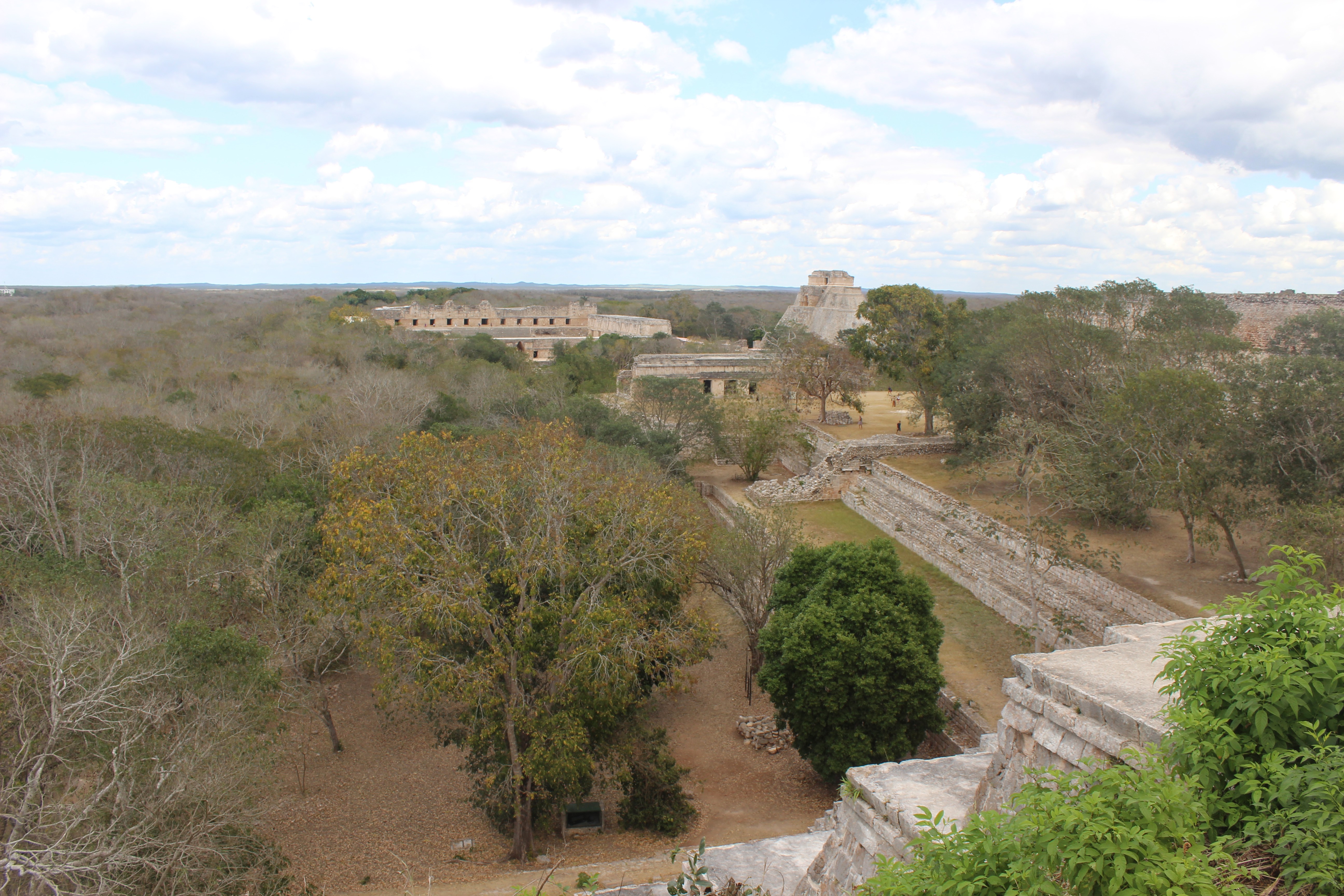 Uxmal is mostly a dry grass savanna area, but the surrounding region is heavily forested.

At the bottom of the pyramid iguanas roam, as everywhere else in Uxmal. They look very much at home here, as if guarding the place until the owners return. 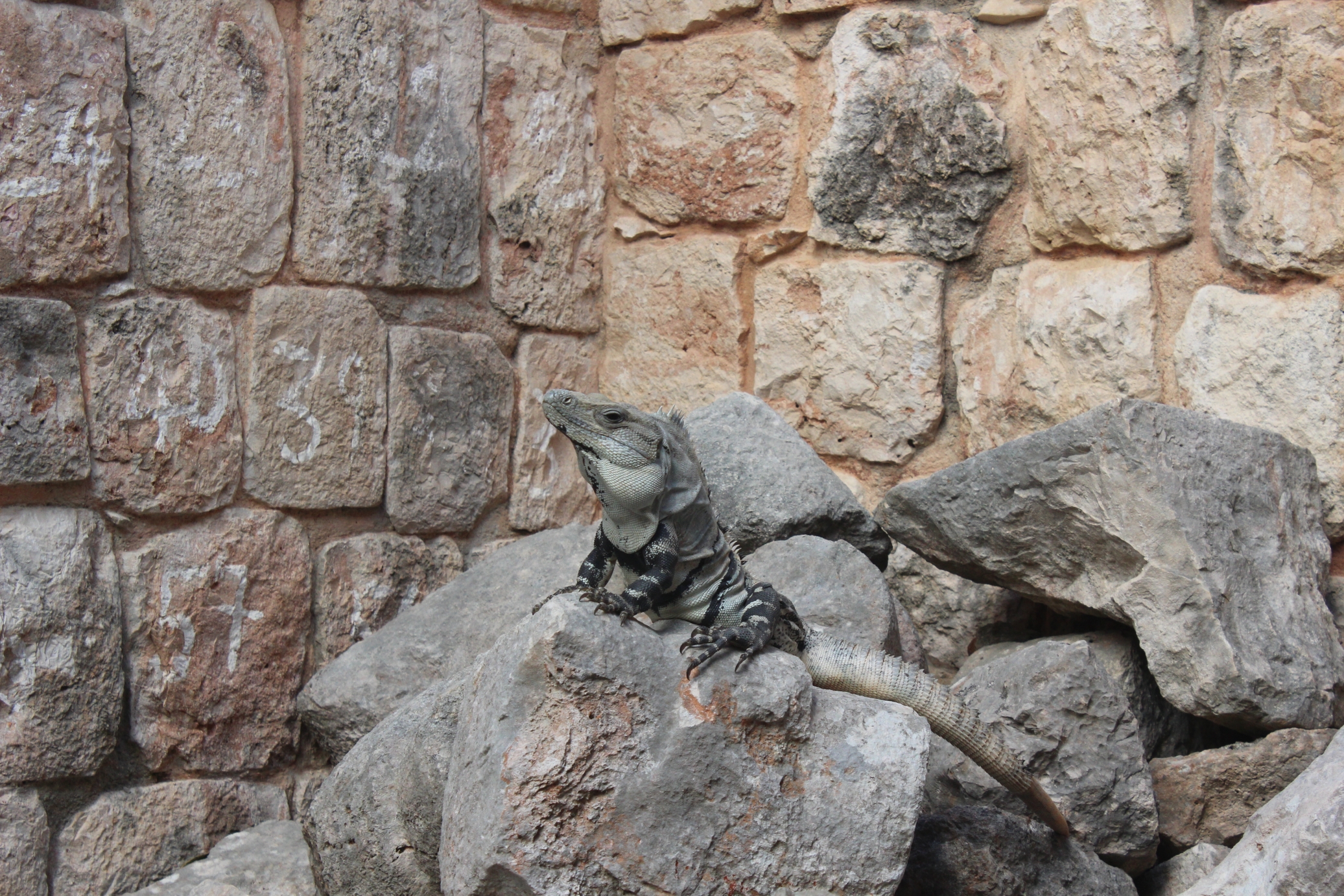 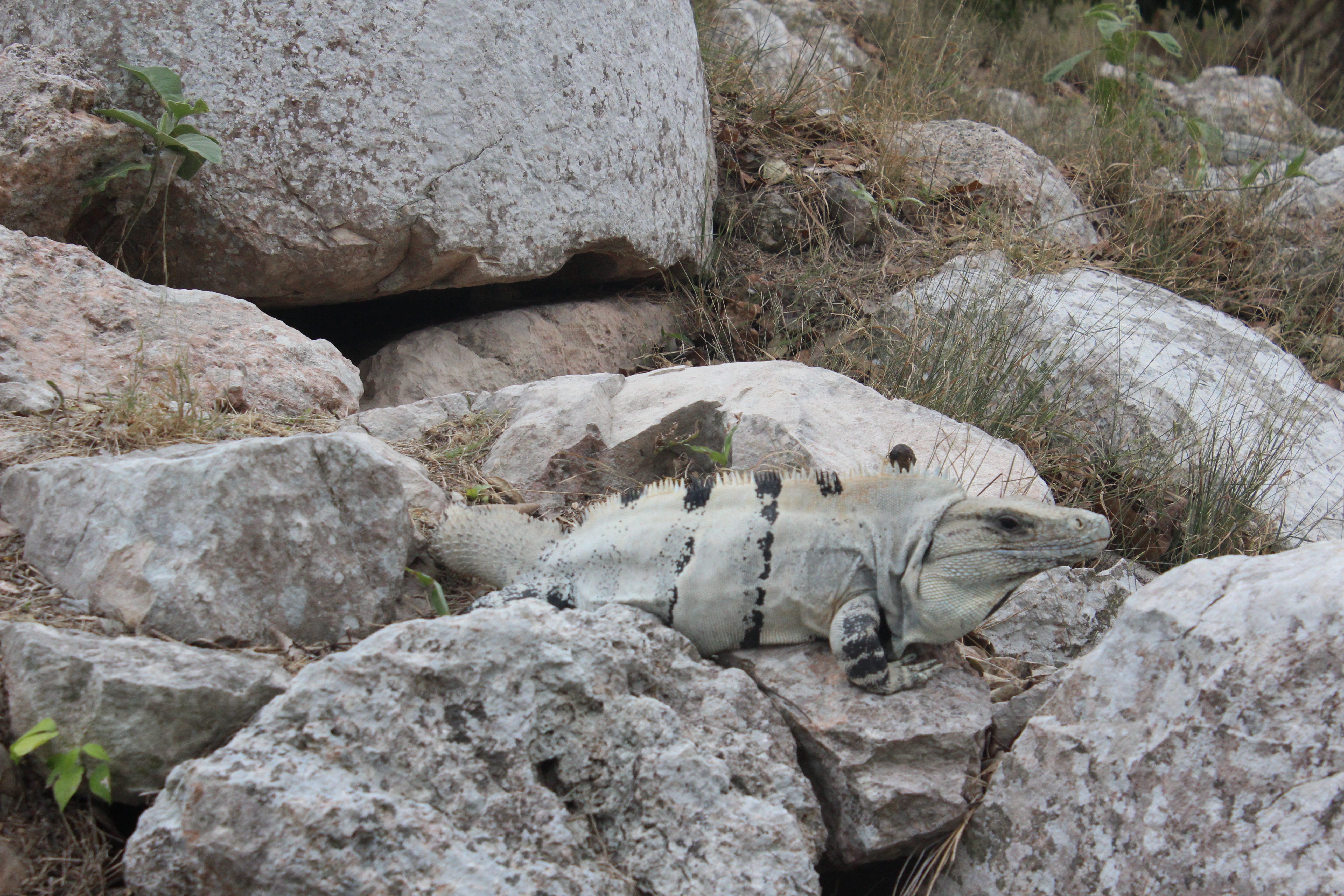 Throughout Uxmal, signs in Maya tell the story of the place to the indiginious Maya. 700,000 of people in Yucatan speak Maya. 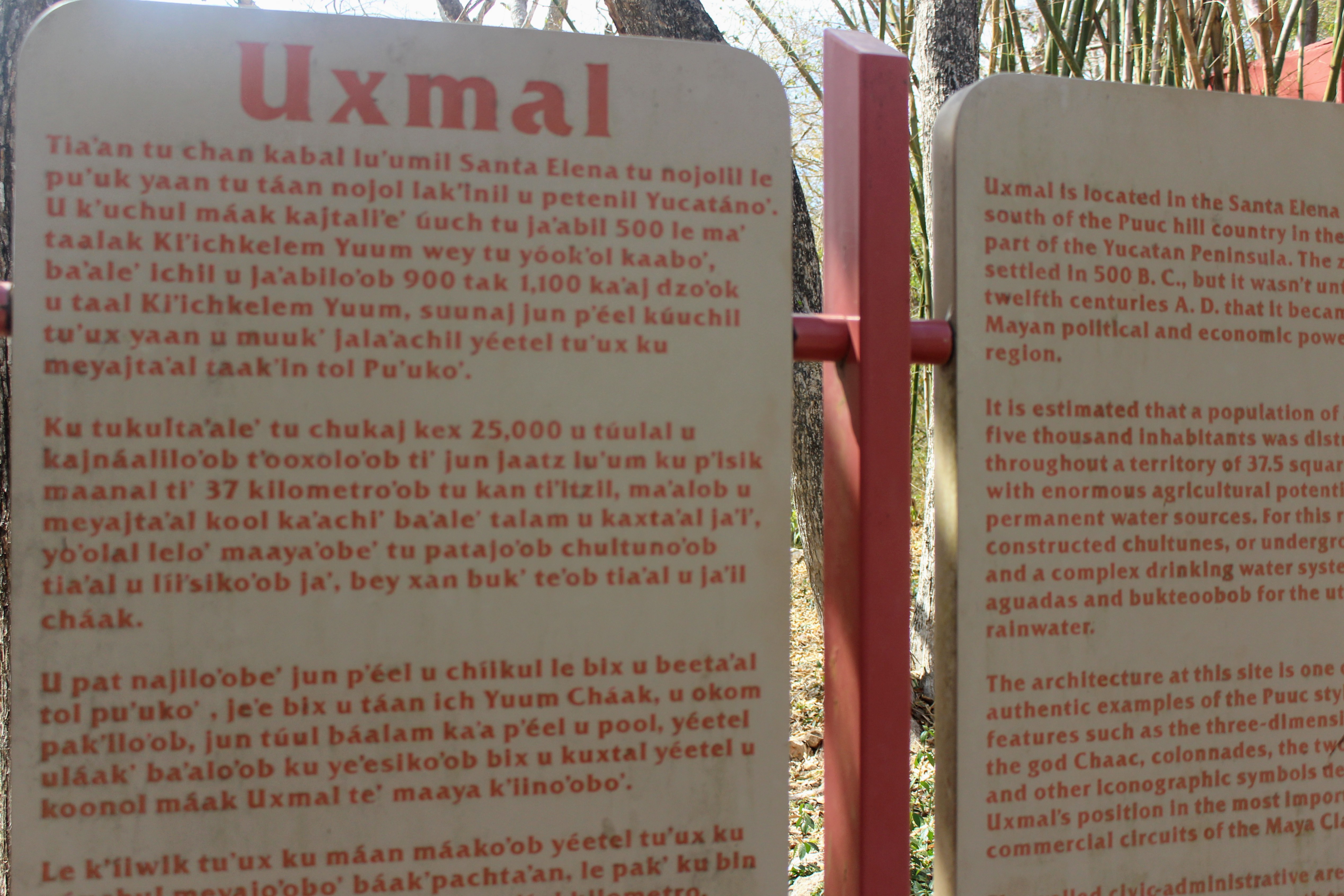 The Governor’s Palace to the east of the Grand Pyramid is a long low building atop a huge platform. It has one of the longest façades in Pre-Columbian Mesoamerica. 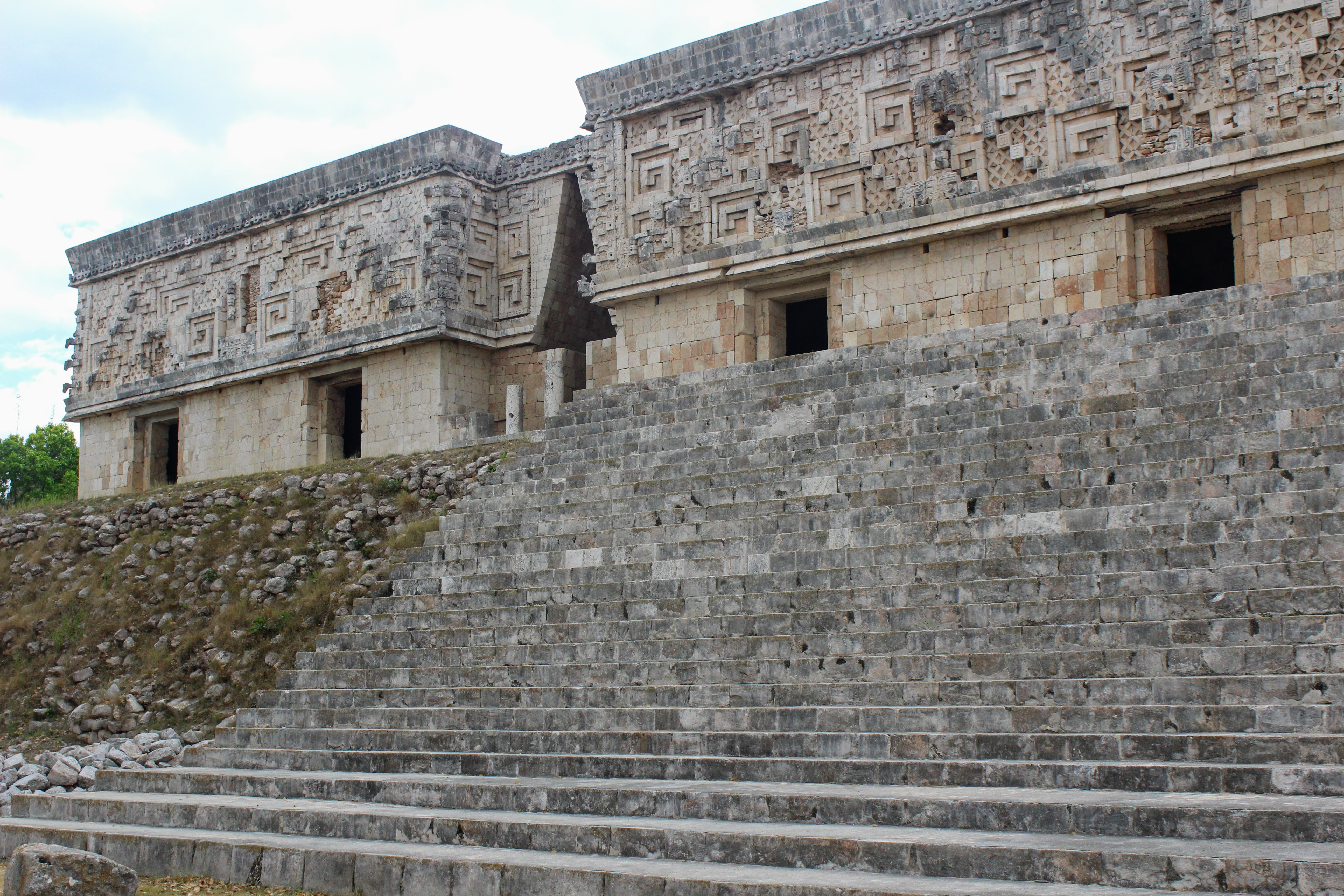 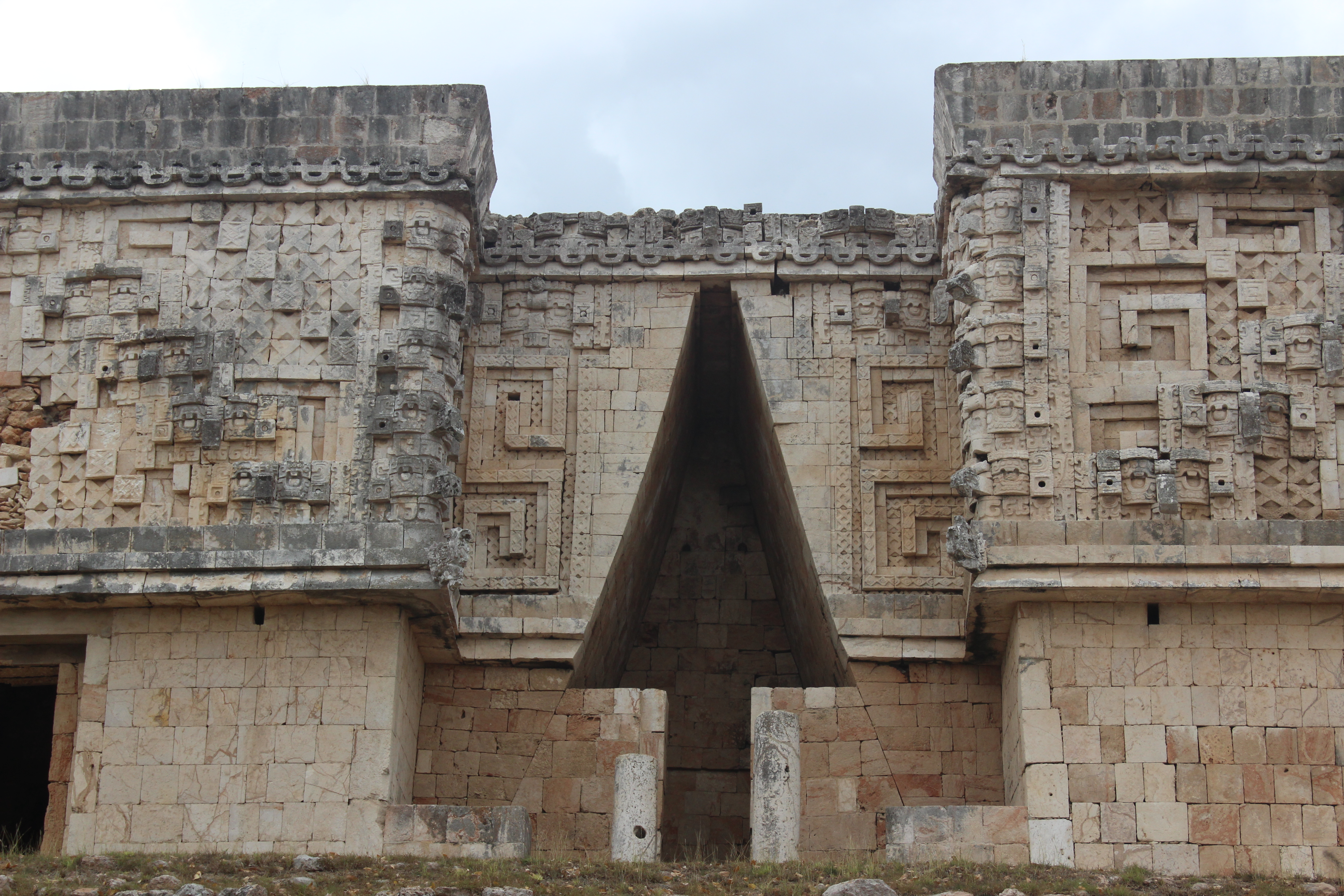 The patterns on the facade are beautifully preserved. 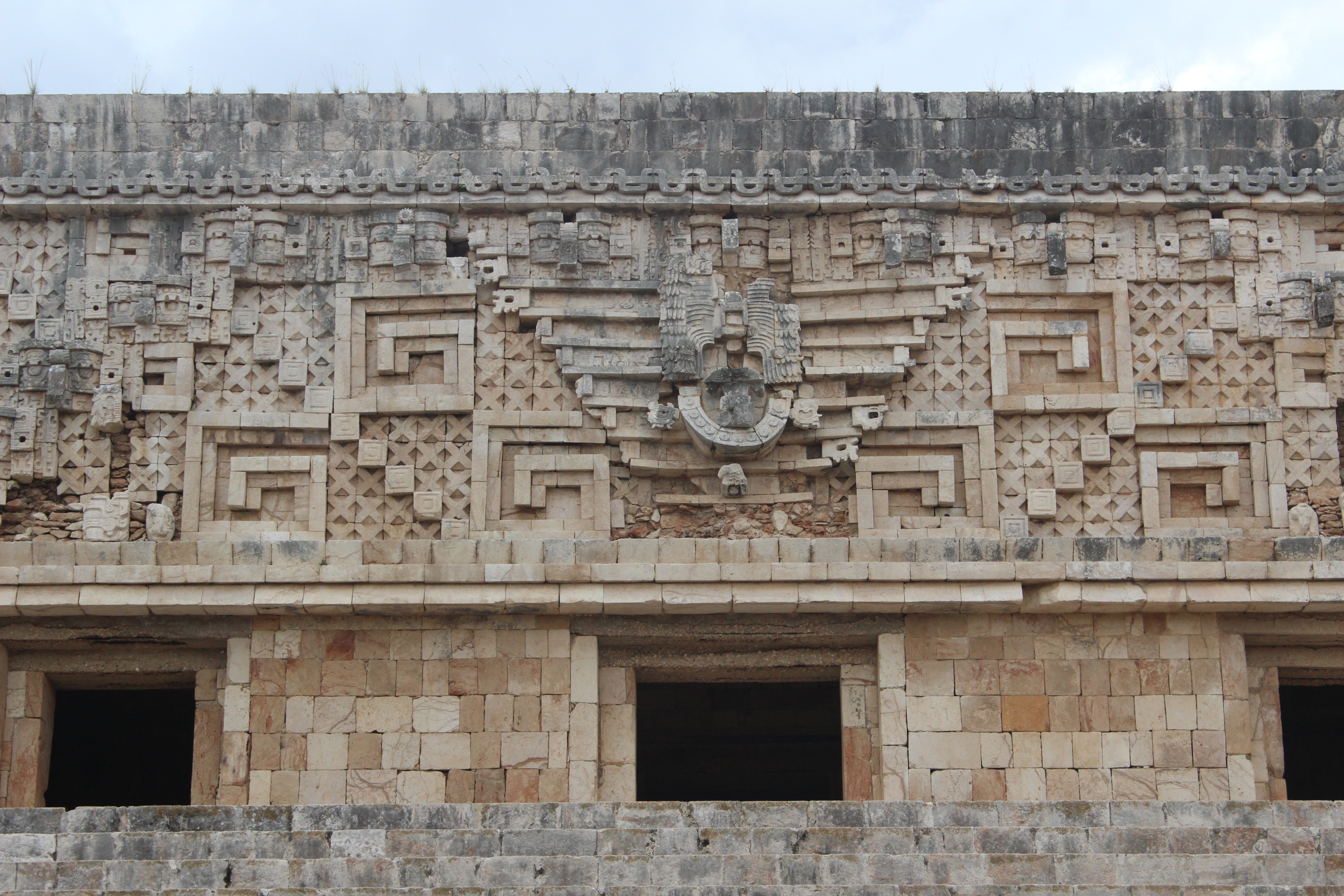 Back at the entrance of the site, our guide pointed to this ceiba tree, explaining that for the Maya it represented a World Tree. In the Mayan sacred book – the Popol Vuh – they speak of the World Tree, which connects the planes of the Underworld (Xibalba), the terrestrial realm and the skies, and generates the four sacred directions.

Leaving Uxmal, a lot stayed a mystery to me. How did it survive so well for over 1500 years? What was life here really like? And most of all, how come it’s virtually unknown outside of Mexico? Maybe it’s all dwarf’s fault?

…as long as the dward followed the witch’s sage advice, the city of Uxmal enjoyed long periods of peace and happiness. Until the moment arrived when the dwarf began to committ excesses, finally becoming a proud tyrant. Then he ordered a clay statue to be made so it would become a more powerful god than the other gods.

The gods, indignant for such a sacrilege, punished the city. Thousands of warriors entered Uxmal, sacked it, and burned it, erasing forever the memory of the people and of the dwarf who had once reigned over them.