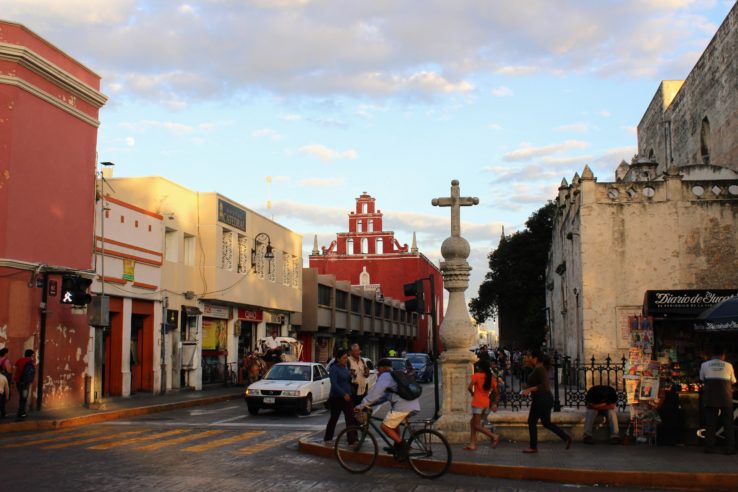 After 2 months in Guadalajara, coming to Mérida was almost like visiting another country. Different people, different food, in some places even signs in a different language. On our way from the airport, the driver was telling me that his father is Maya while his mother is a mestizo. “Did your father speak Maya with you?”, I asked him. “No, my mother wouldn’t let him speak Maya in the house”.

The Maya people, the descendants of the same people who built the pyramids, make up the main indigenous group in Yucatan, and 700,000 of them still speak Maya.

Here is another thing you suddenly see on every corner: hammocks. They are everywhere, in houses, on merchants shoulders and even as a decorative element on ceilings. 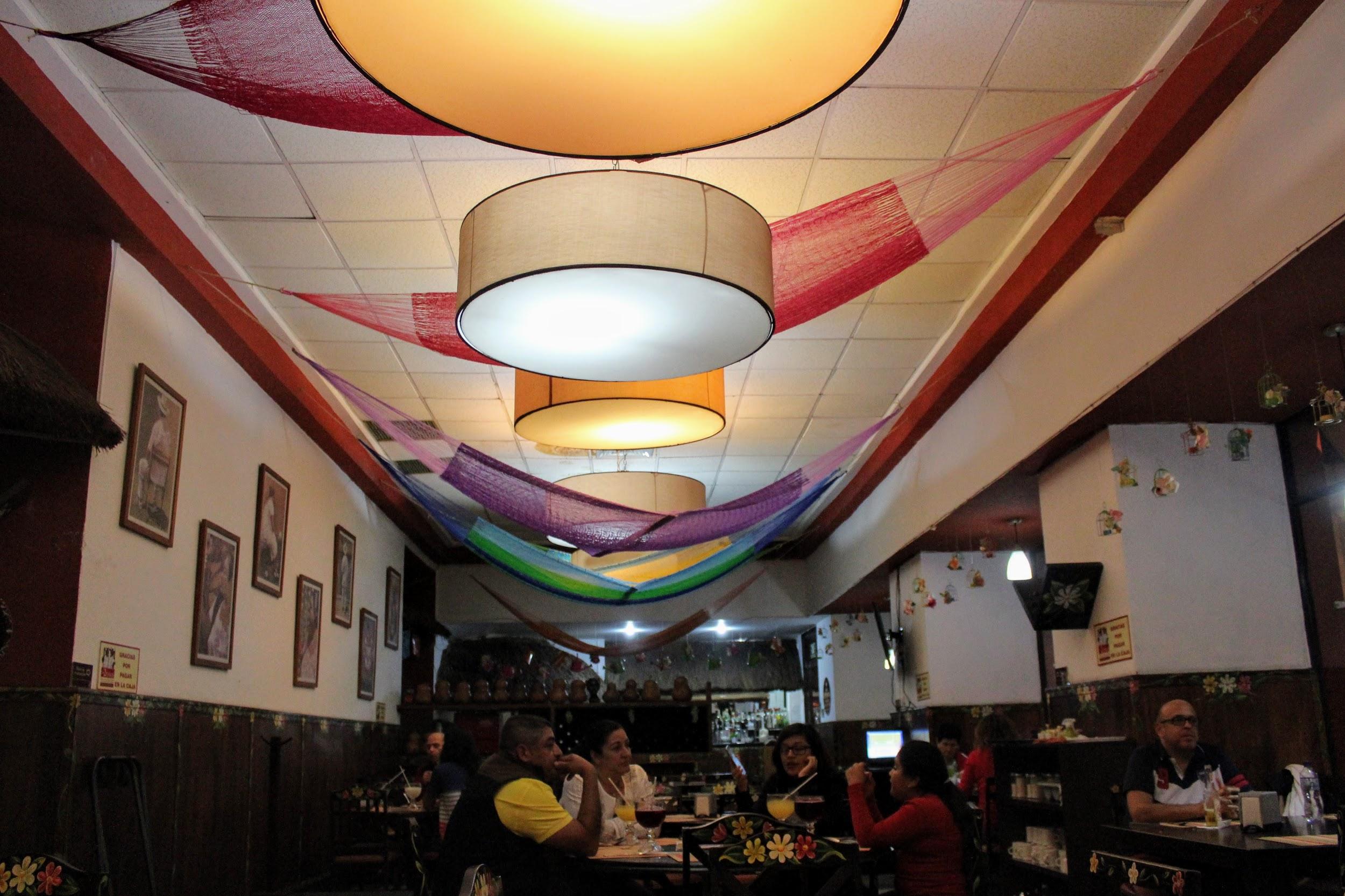 Food must be the most resilient cultural attribute of people. You can take away their religion, their language, their customs, but you can’t take away what they are used to eat. After 500 years of European domination, in Yucatan, maize, frijoles (beans) and chilli peppers are still the most important ingredients, present in some form in almost every dish. 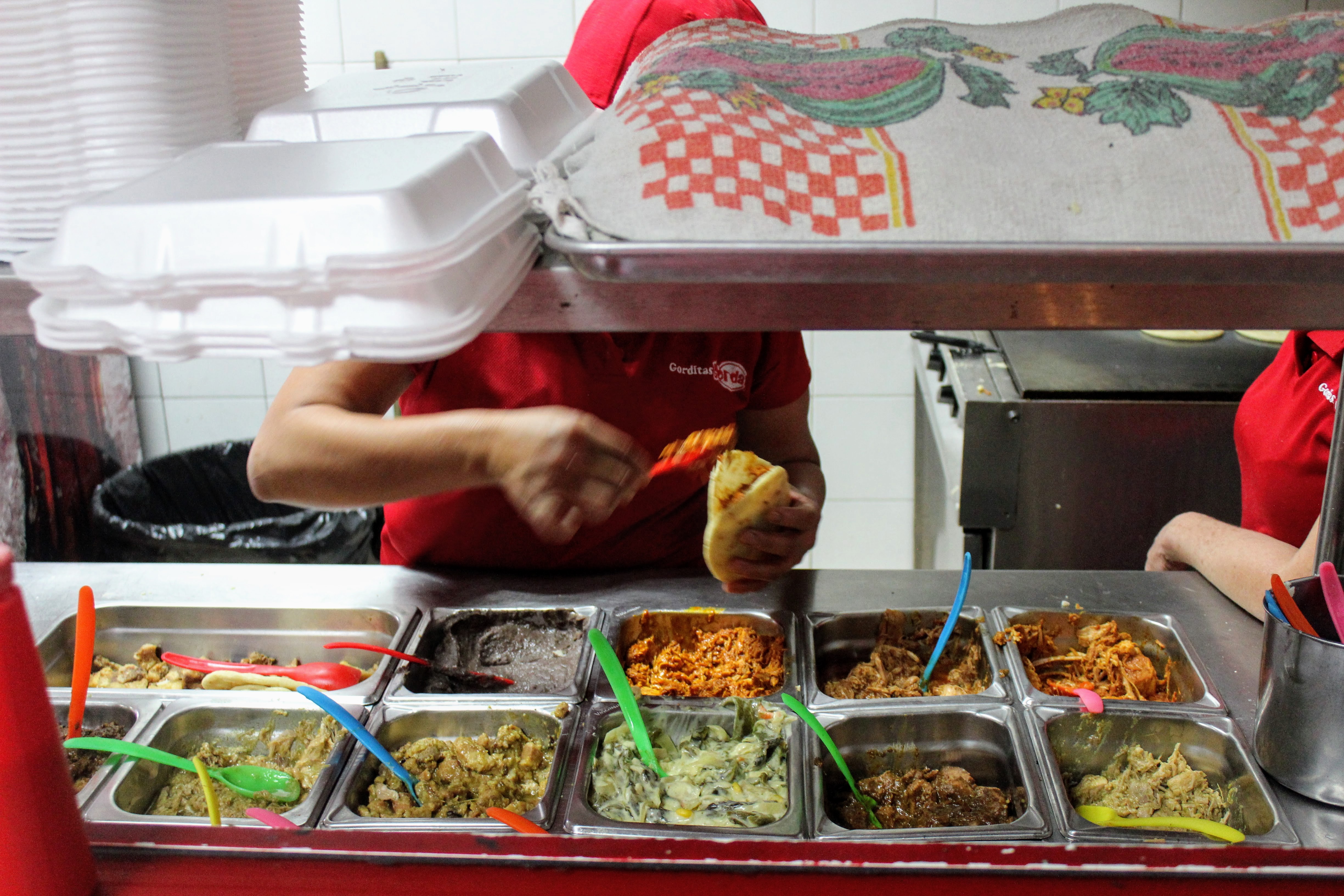 In Gorditas Doña Gorda, just near the central square, tortillas are prepared on spot. They are called here gorditas (“little chubbies”), because unlike regular tortillas which are basically flatbreads from maize, gorditas are thicker, and are filled with meats, beans and other fillings. One gordita is around 50 cents. We took home six, all with different fillings, and they were all delicious. 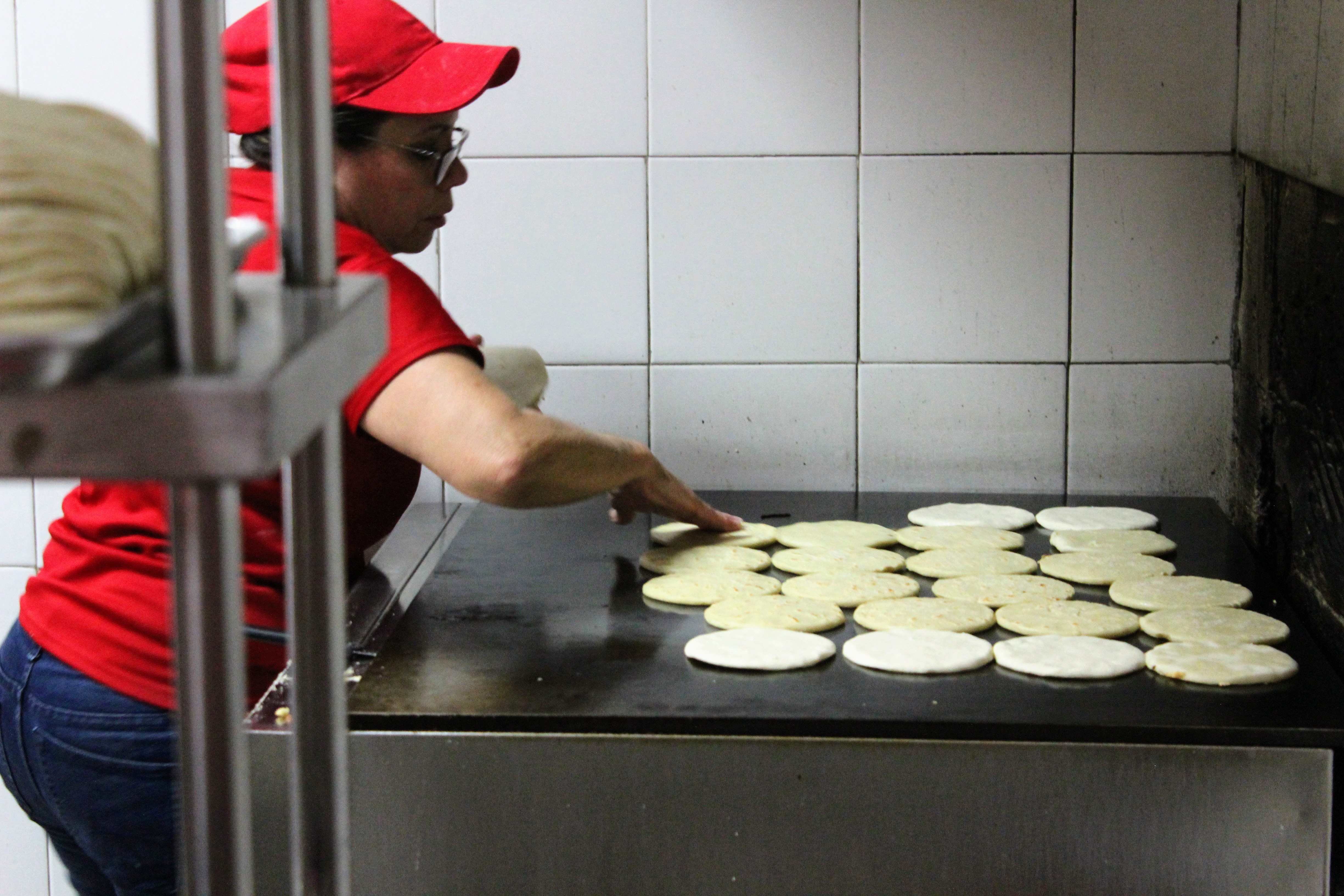 While the Maya culture is preserved in food, crafts and the syncretism of the local catholicism, the Spanish left their mark on the city in its architecture.

Built on the site of a destroyed Maya city, the spanish planned it according to their usual preference: A grid of straight lines with a large square in the center.

Let’s admit it, there is nothing that says Spanish architecture better than… urns. 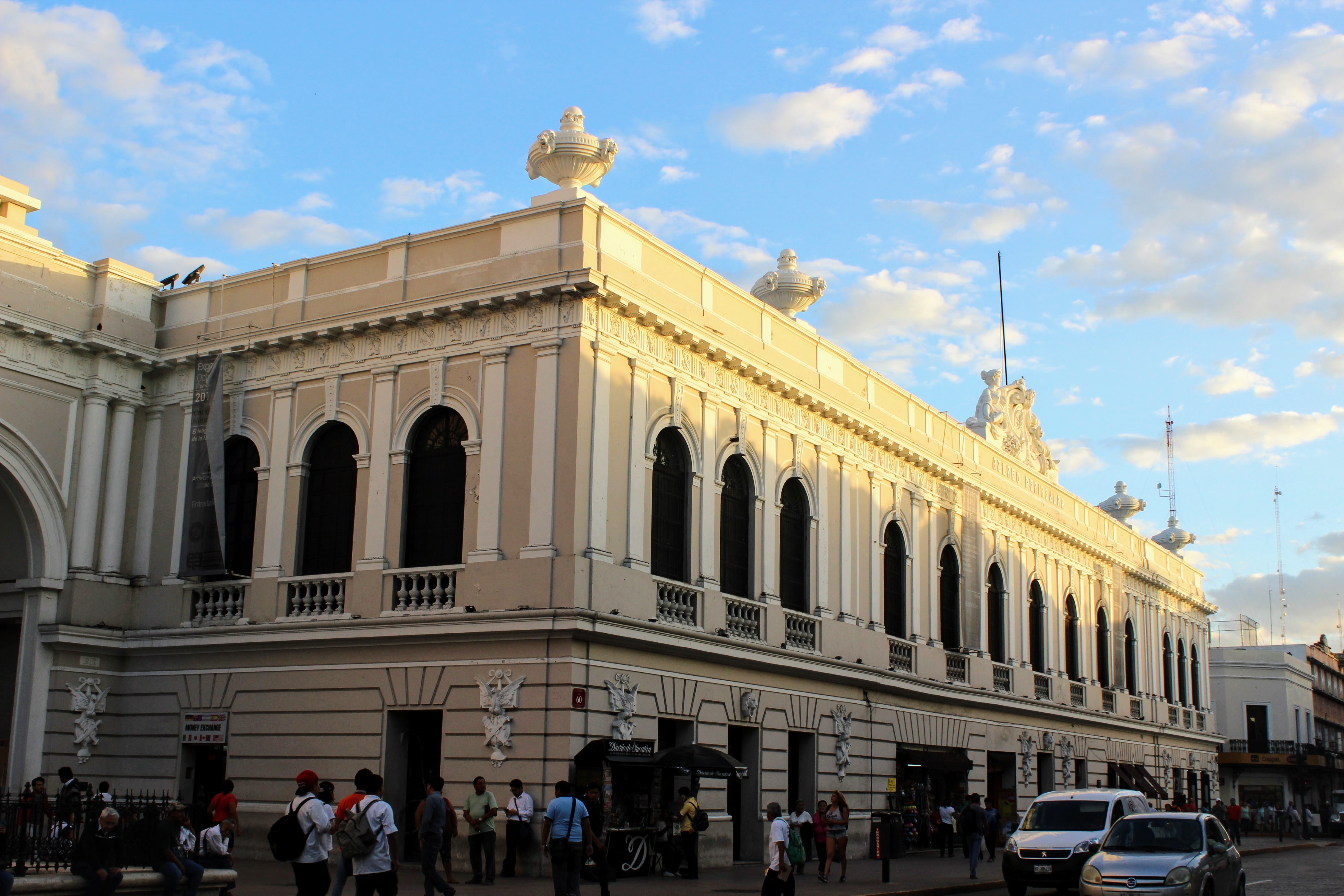 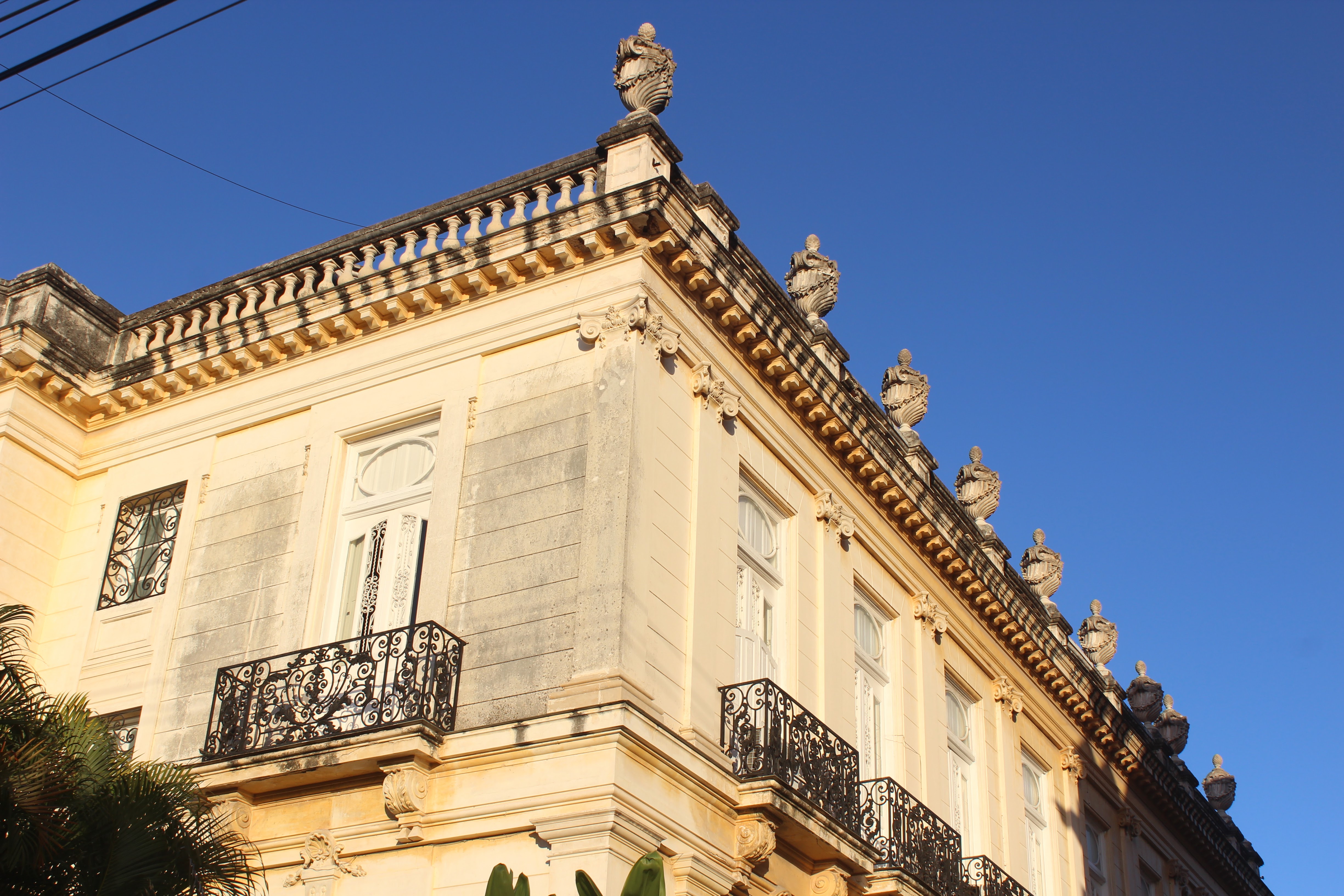 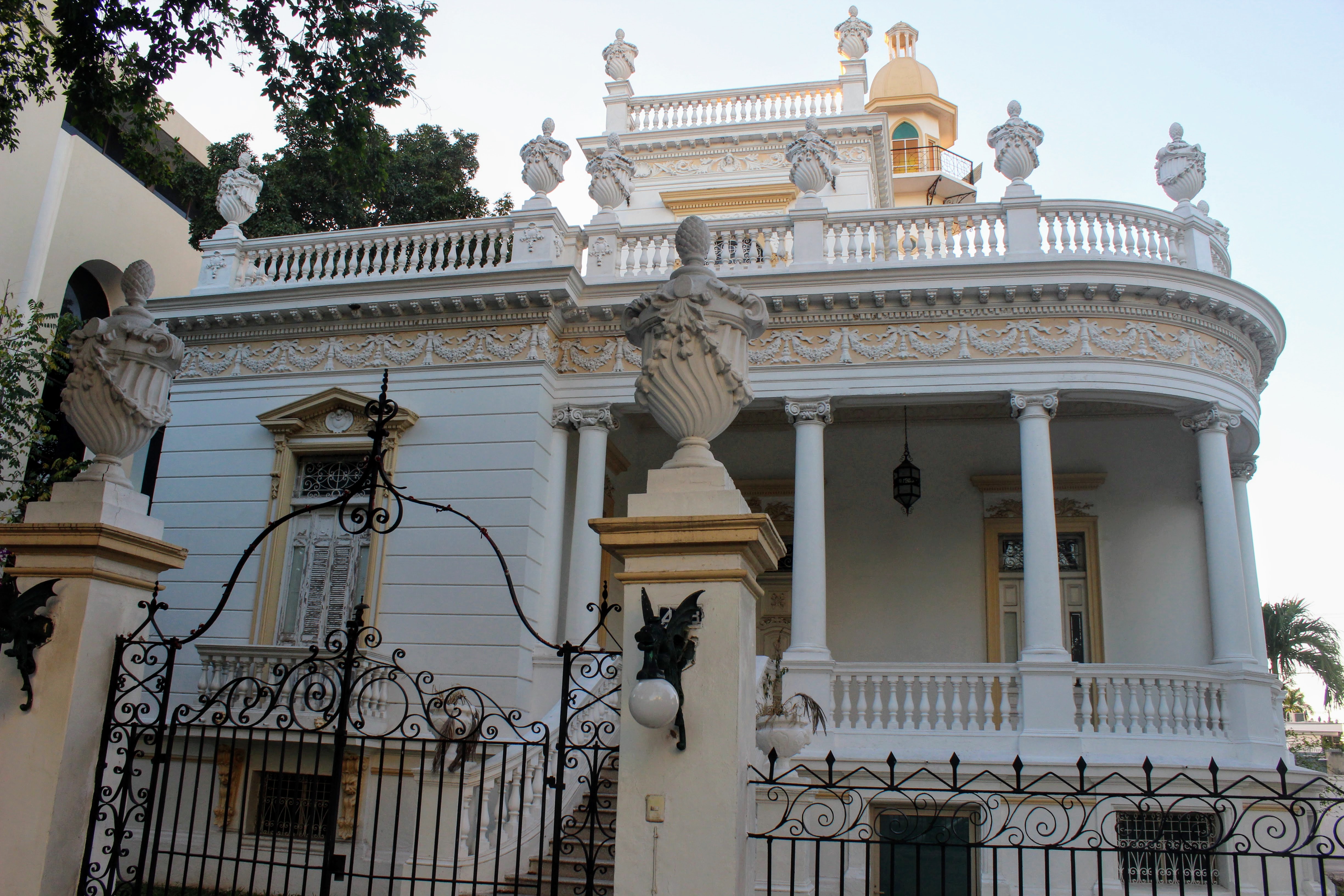 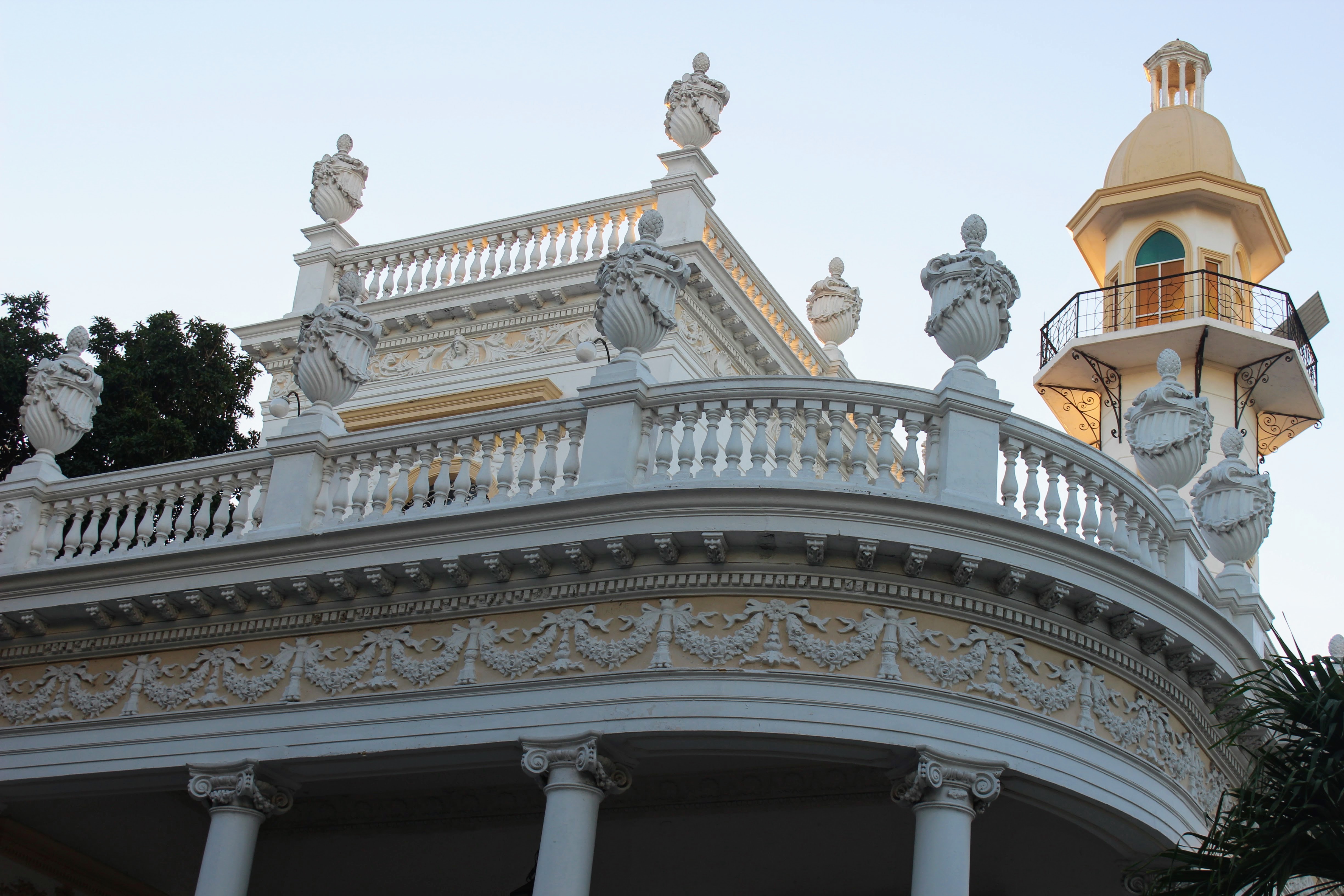 Casa de los Montejo is one the oldest spanish buildings in Merida, built in 1540’s by the conquistadors of Yucatan –  Francisco de Montejo, his son and his nephew who was the one who finished the conquest his uncle started. 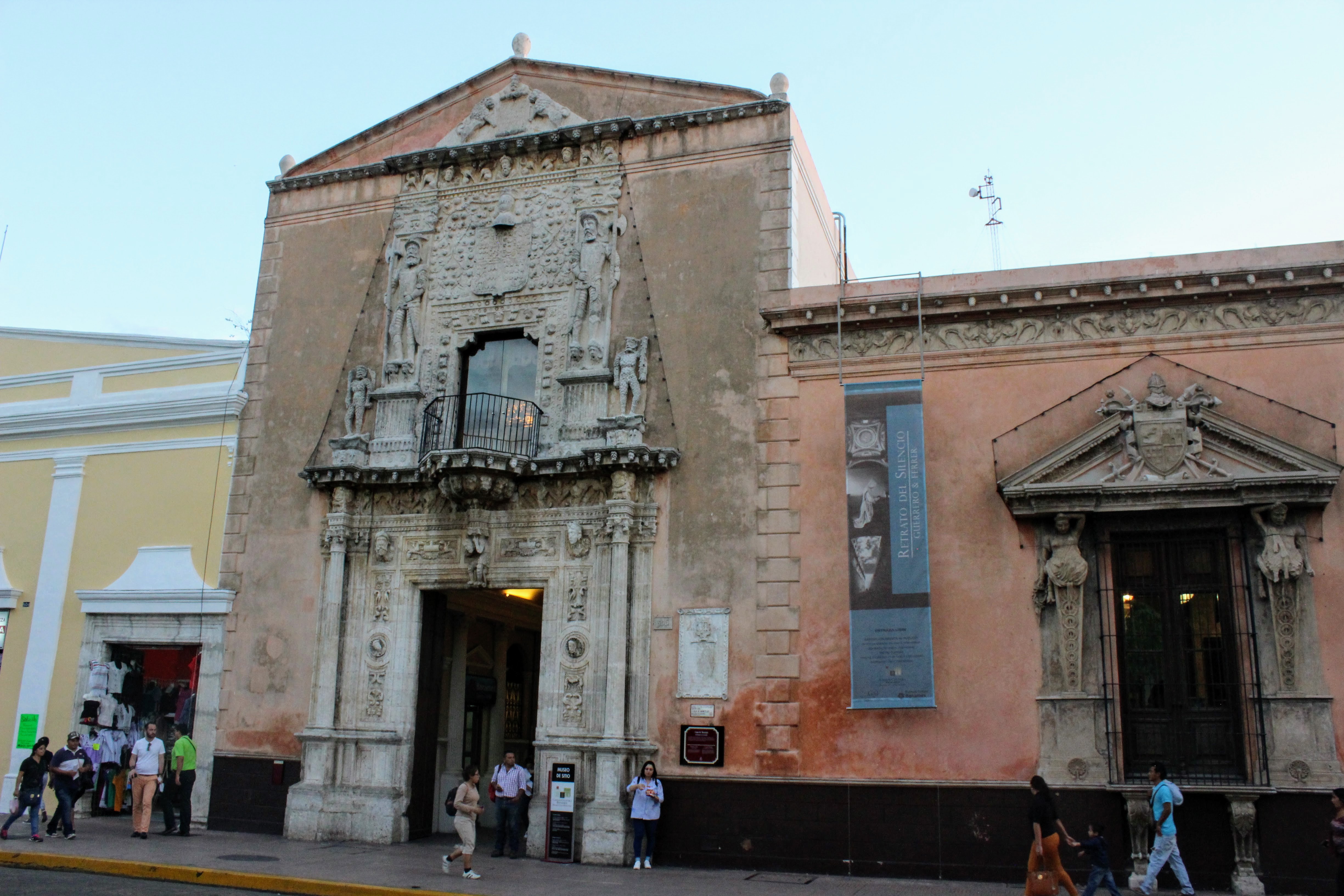 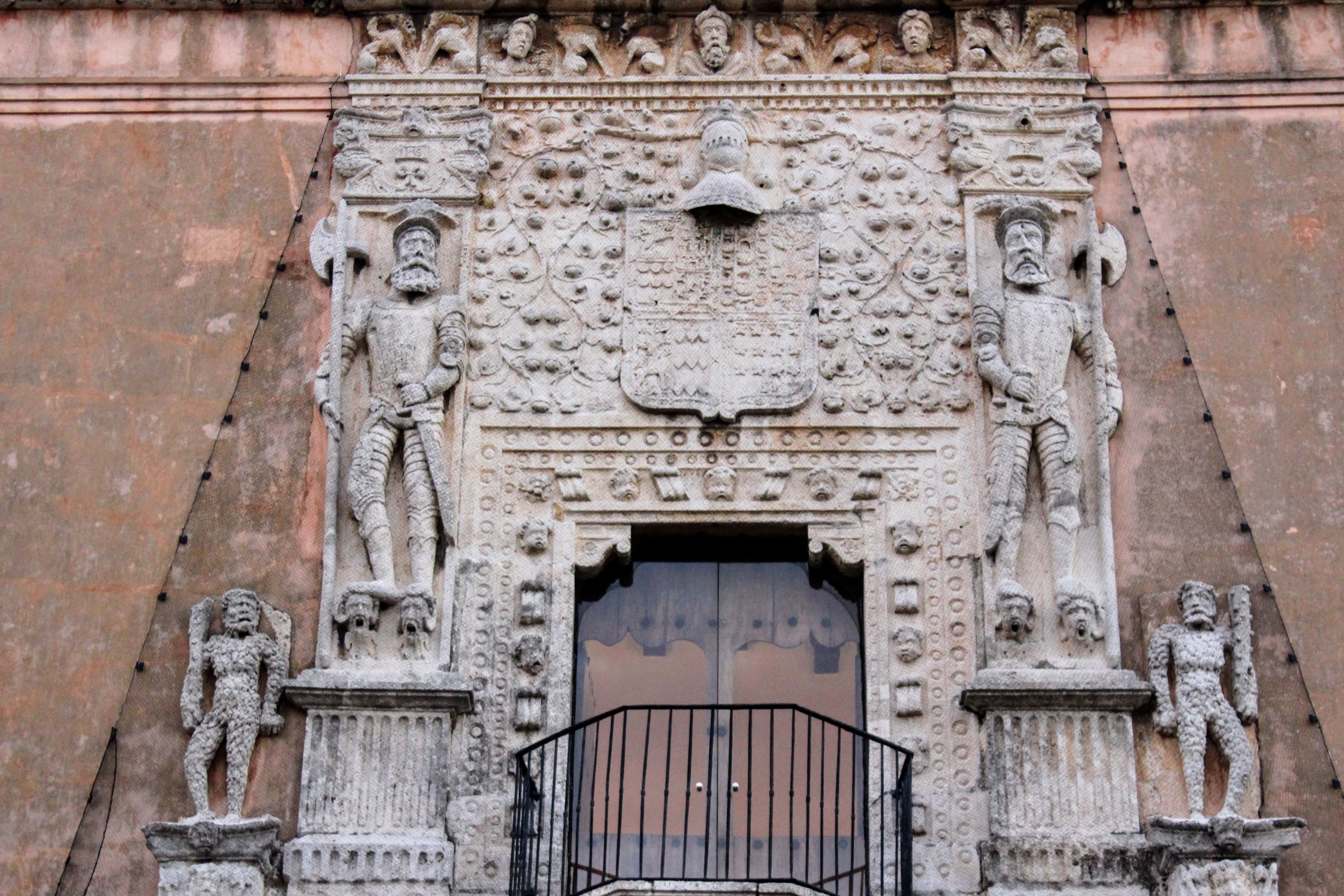 The entrance to the house is free. Inside, rooms decorated in victorian style tell the story of the mansion throughout the centuries. 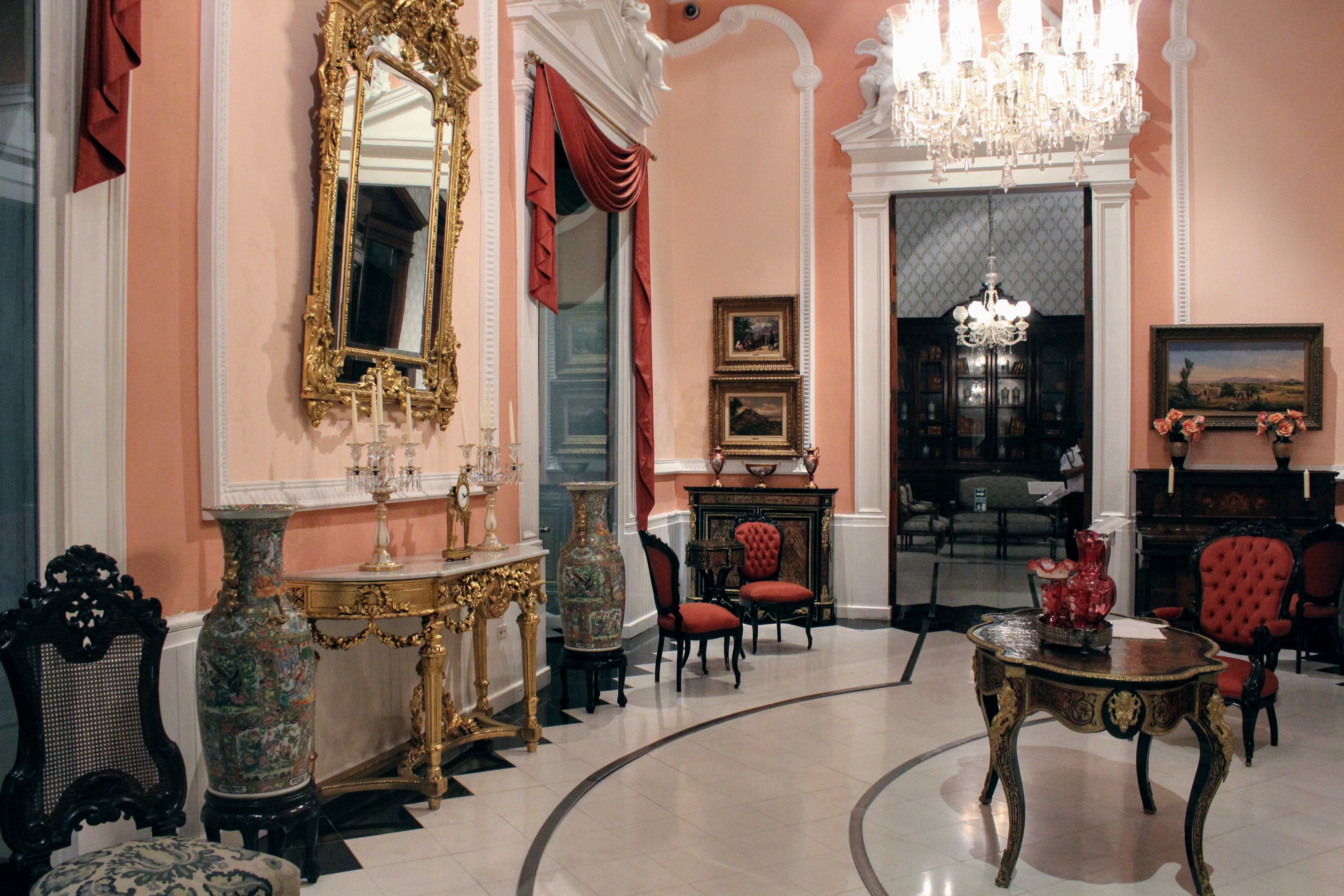 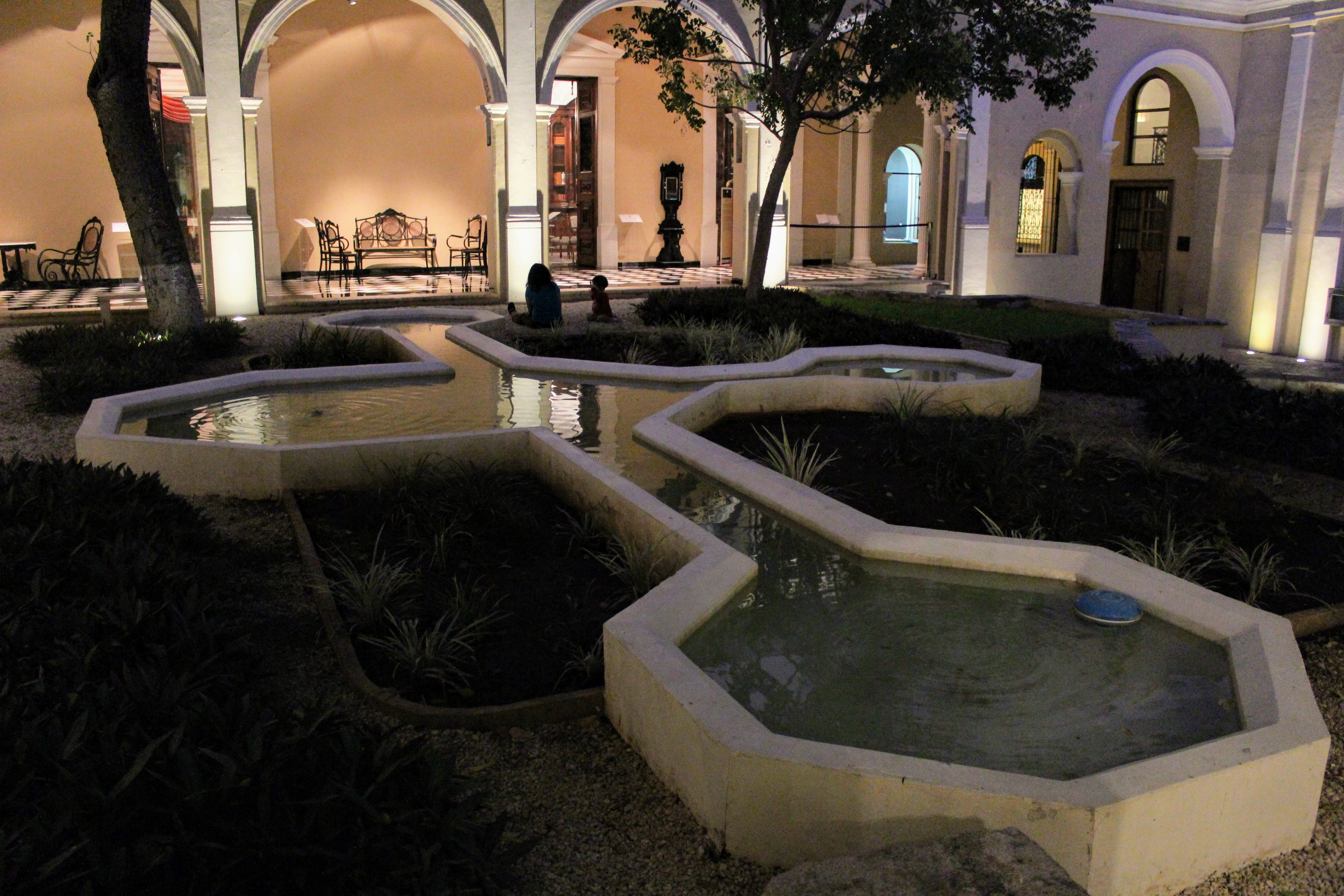 On the other side of Plaza Grande stands Merida’s cathedral, the first one to be finished on the American mainland. 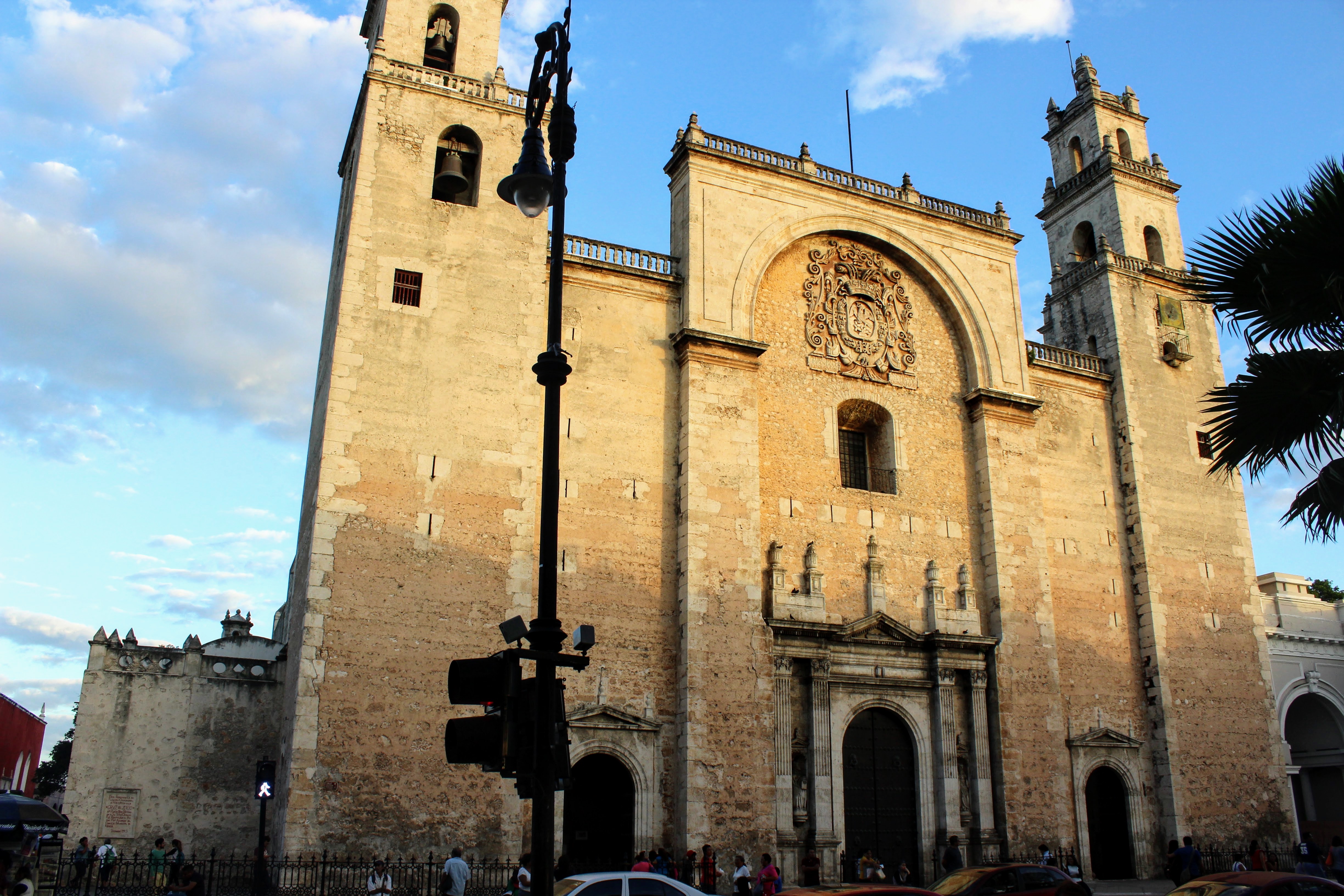 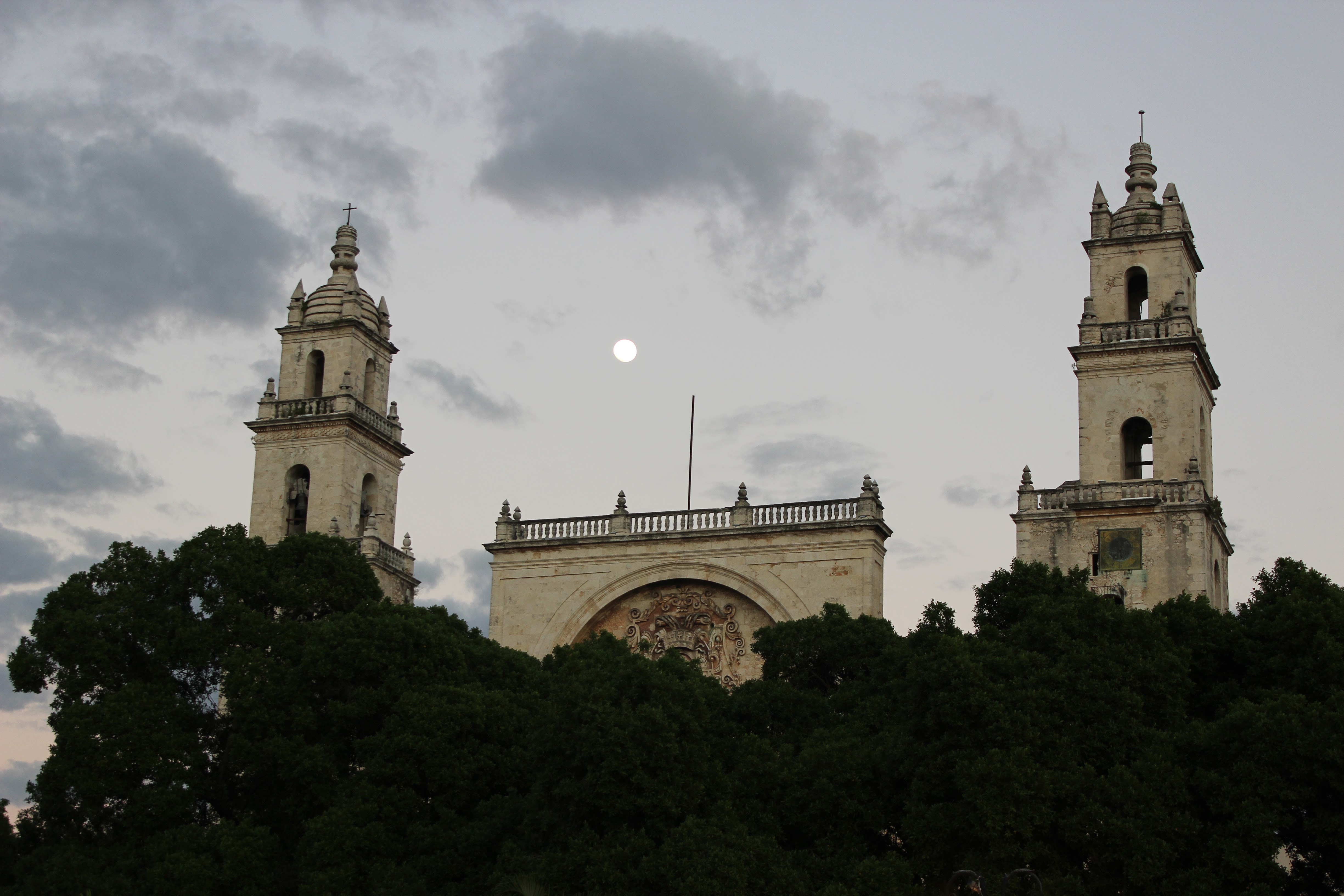 The distinct white chairs facing each other are spread throughout the city and render it a unique visual appeal. 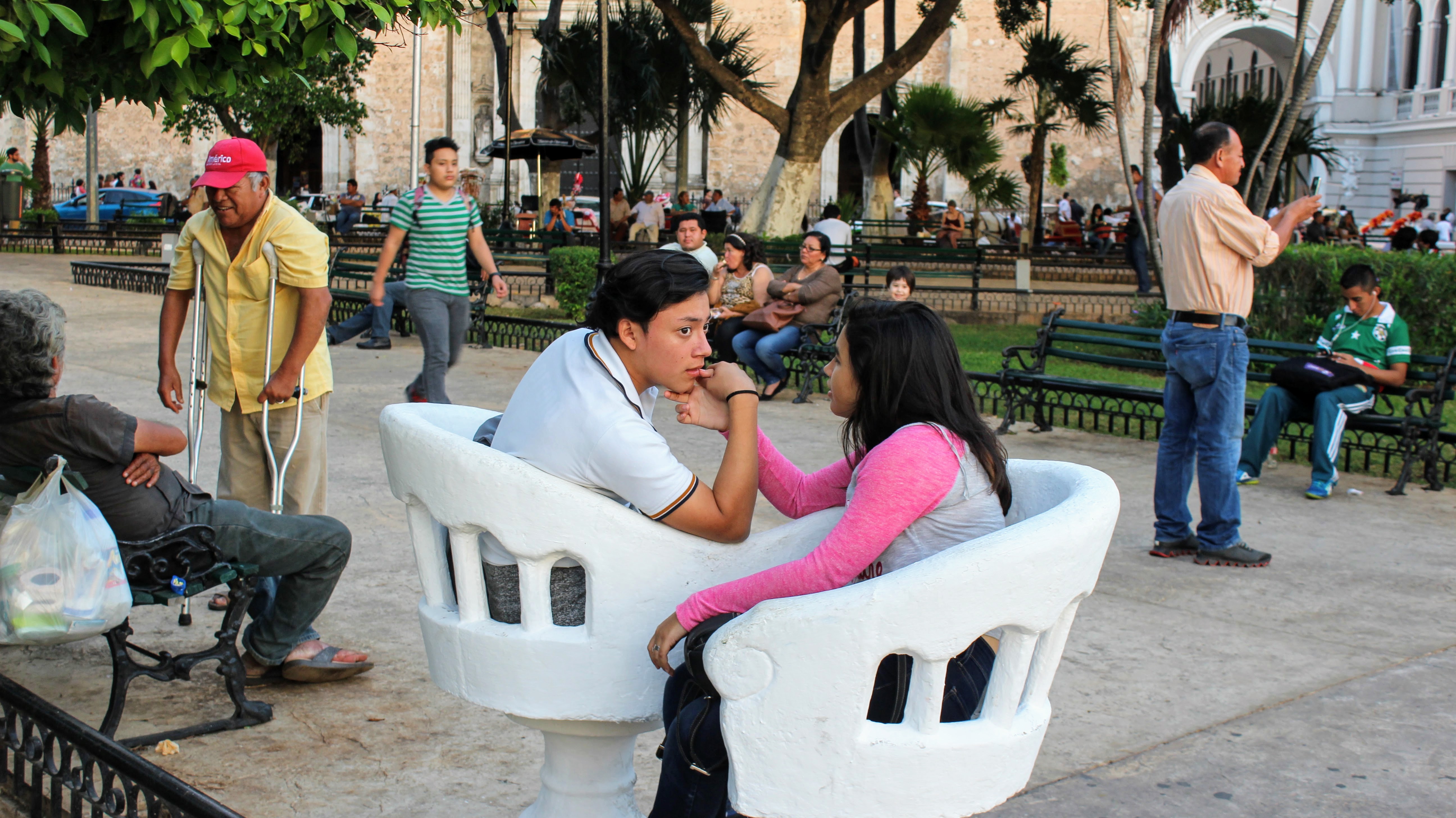 Late in the 19th century and the early 20th Century, the area surrounding Mérida prospered from the production of henequén,a variety of the agave cactus used to produce rope which was exported for the booming shipping industry. For a brief period, around the turn of the 20th century, Mérida was said to house more millionaires than any other city in the world. 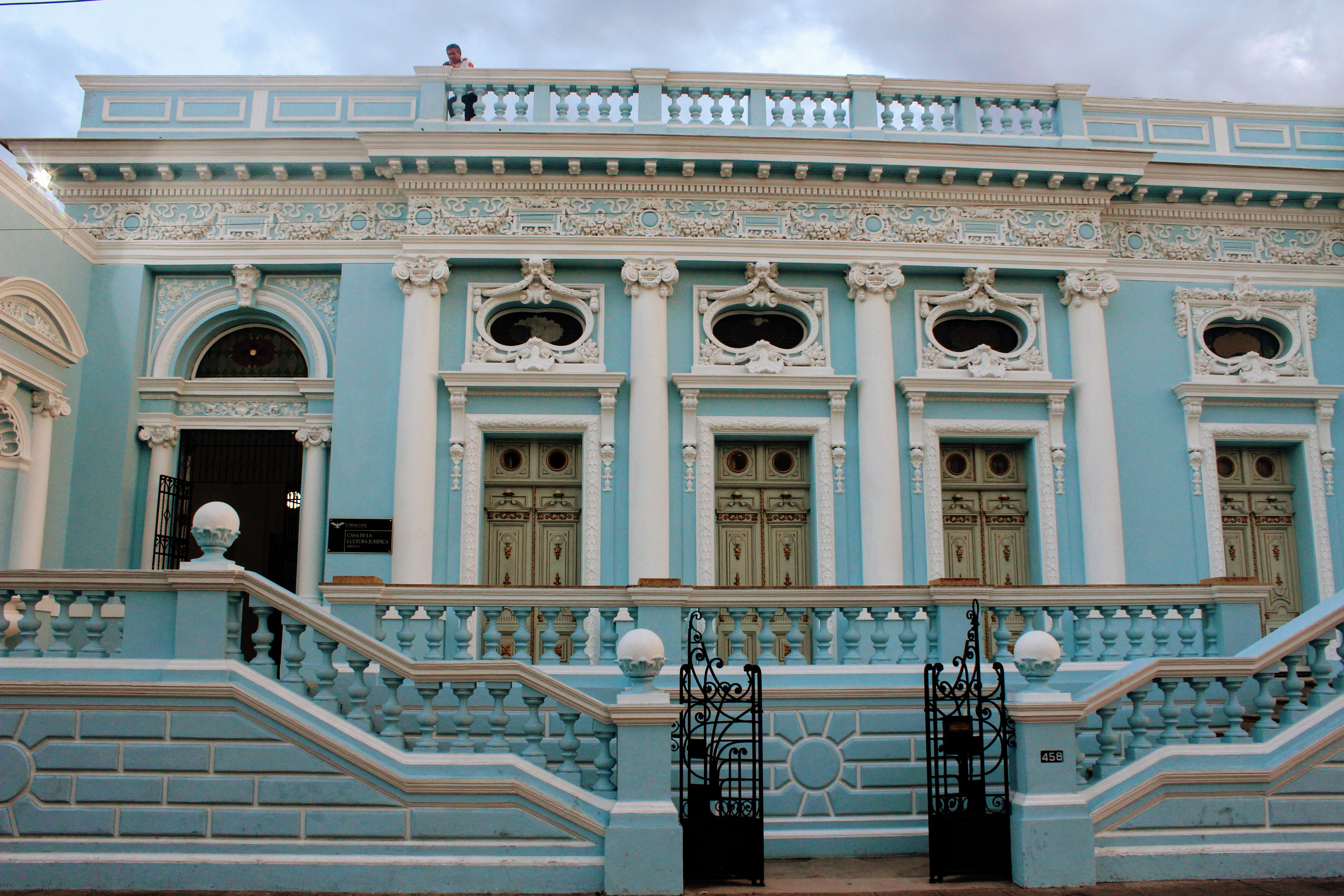 The result of this concentration of wealth can still be seen today. Many large and elaborate homes still line the main avenue Paseo de Montejo, though few are occupied today by individual families 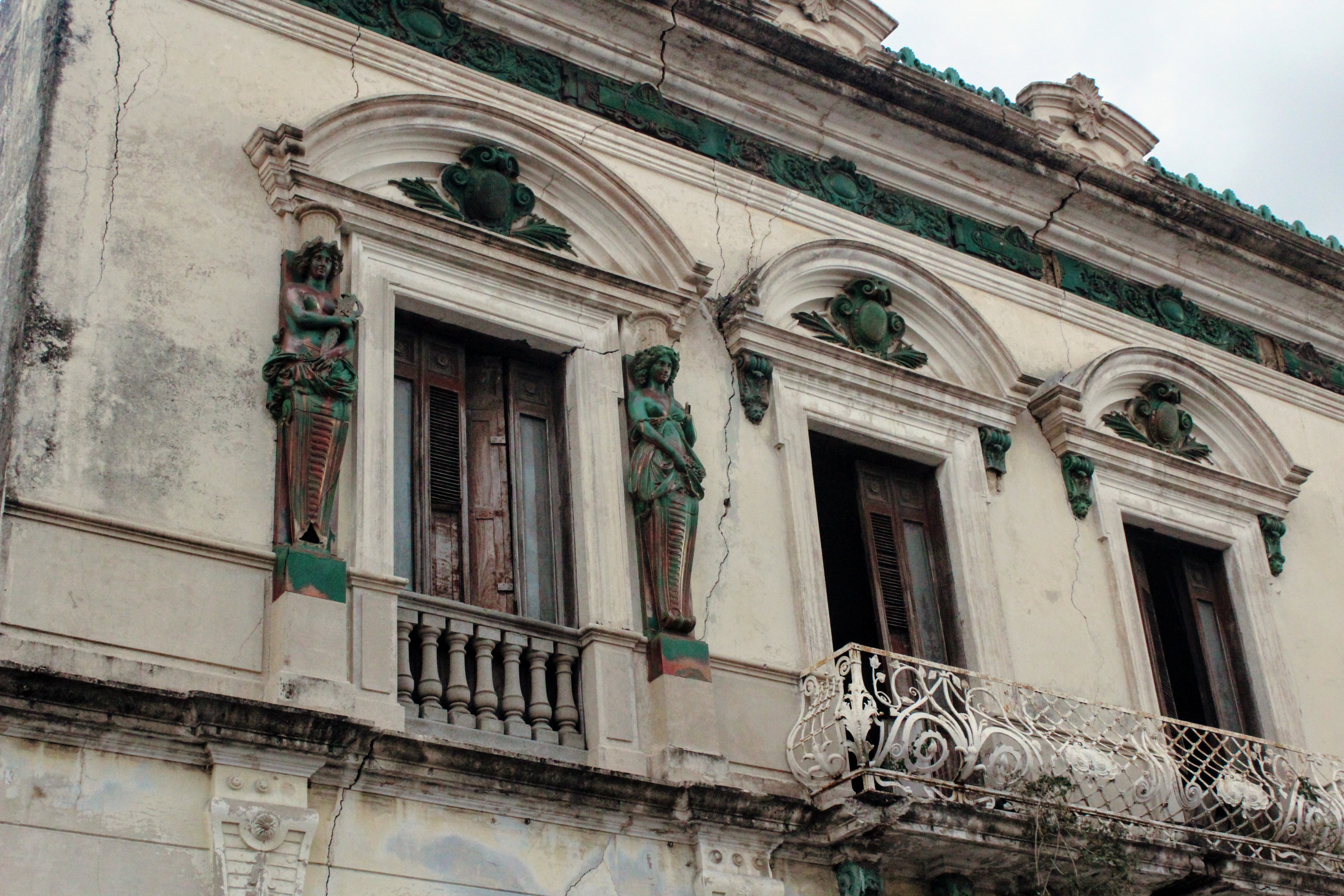 The government palace on the third side of Plaza Grande is a must visit, as much for its art as for the story it tells of Yucatan. 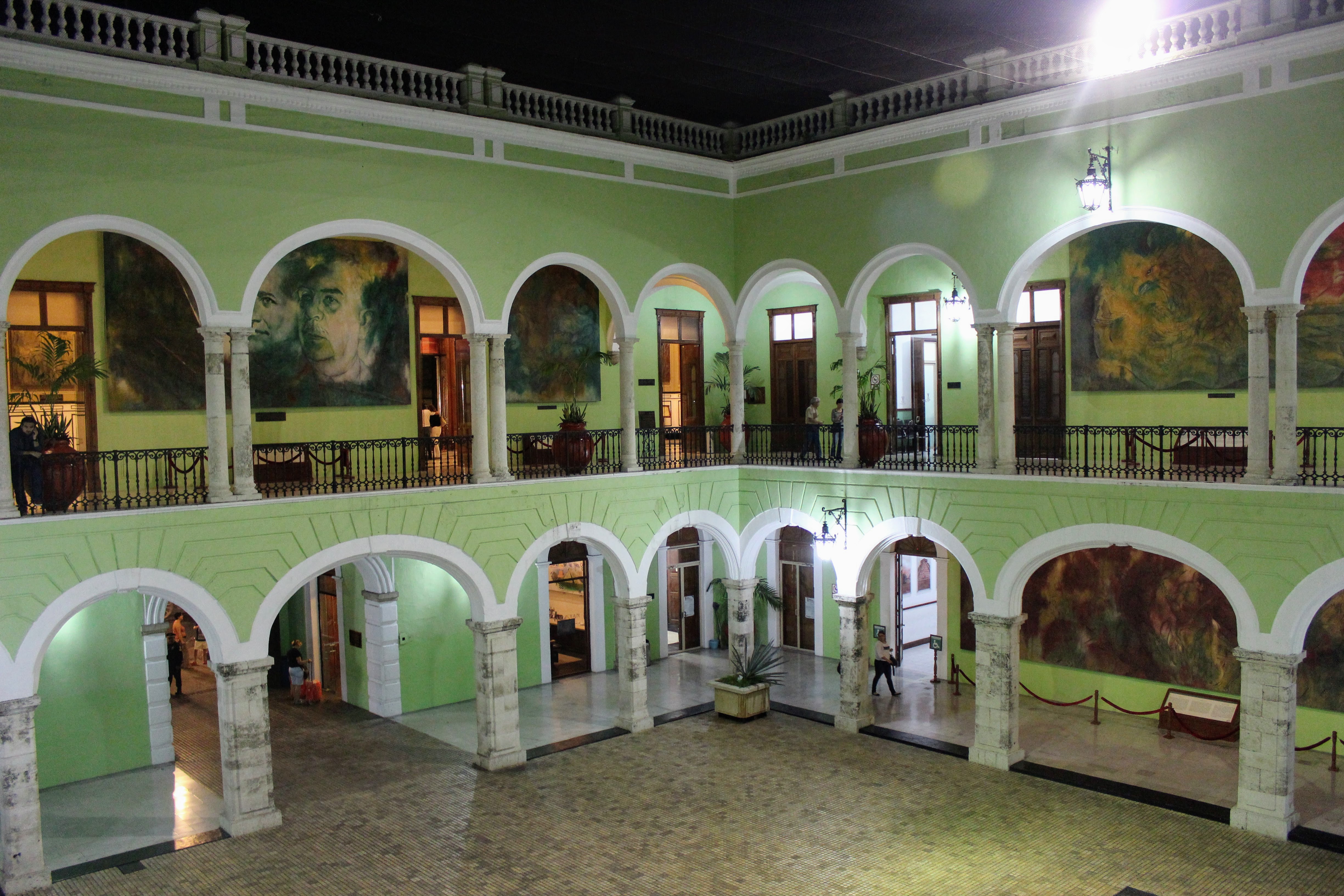 In the history of Yucatan, the Spanish bishop De Landa (in the below picture on the left) is a central figure, who has left a mixed legacy. On the one hand his writings contain much valuable information on pre-Columbian Maya civilization. On the other, he played a central role in the destruction of much of that civilization’s history, literature, and traditions. 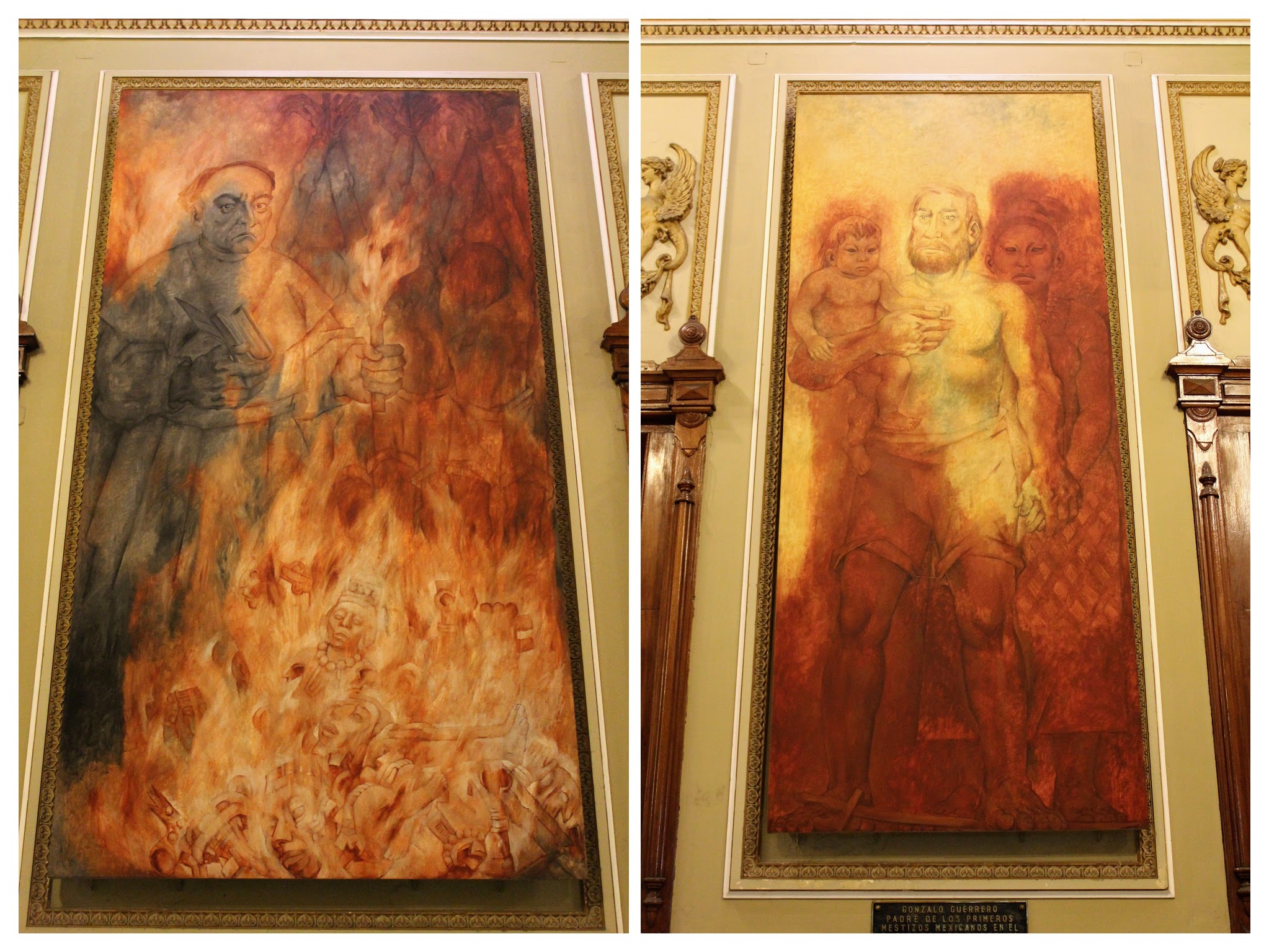 On the right is Gonzalo Guerrero, a Spanish sailor who shipwrecked along the Yucatán Peninsula and was taken as a slave by the local Maya. Earning his freedom, Guerrero became a respected warrior under a Maya Lord and raised three of the first mestizo children in Mexico. 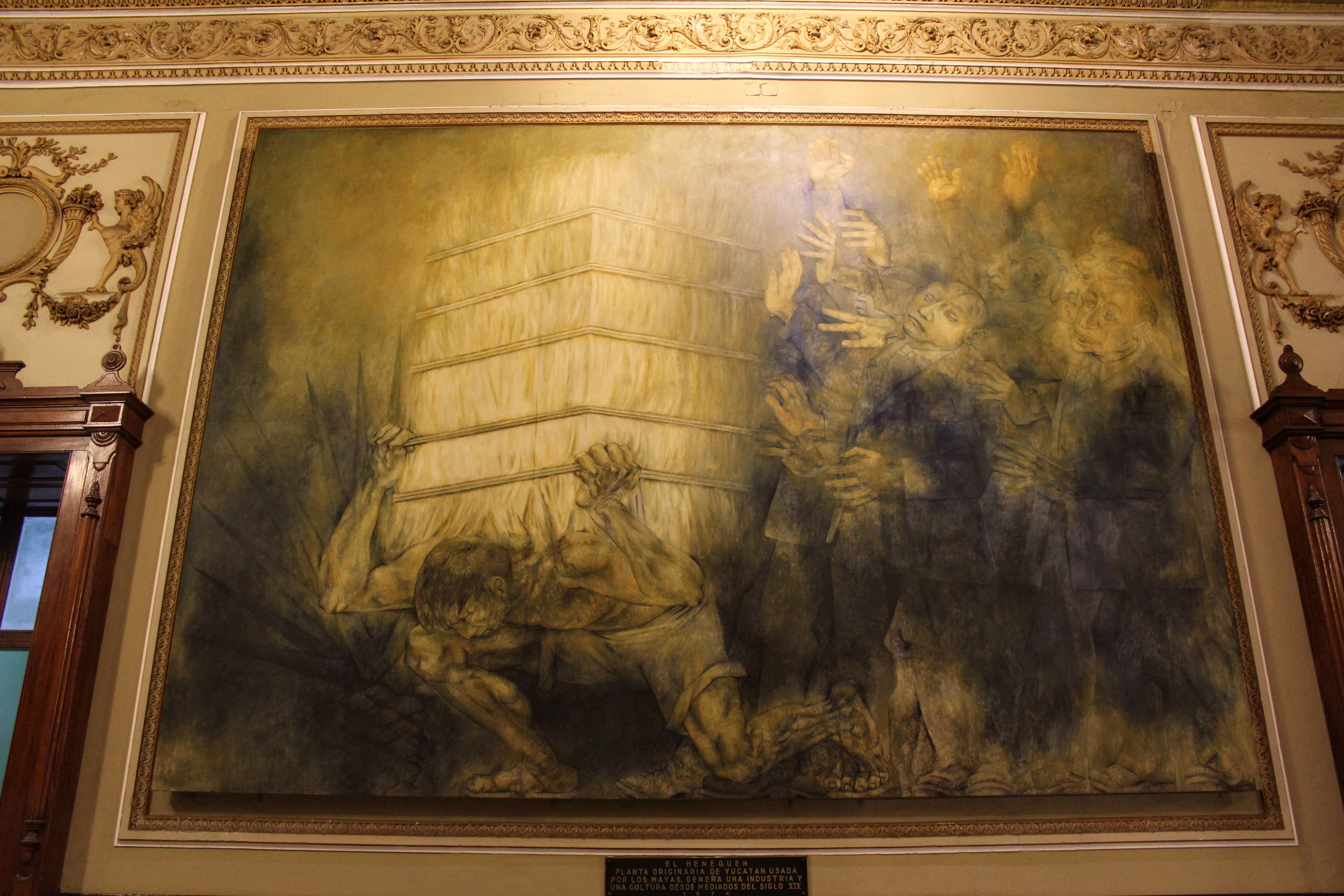 The plight and the suffering of the Maya under the Spanish rule is vividly portrayed in the works on the government palace walls. At first I surprised by this honest admittance of past sins. But then I realized that today’s elites do not associate themselves with the Spanish. Mexican independence allowed the privileged classes to distance themselves from the atrocities purported for centuries, without doing enough to make the lives of the disenfranchised Maya better.

On Monday evening I went to see the weekly Vaquería Yucateca, traditional Yucatan dances performed by older men and women near the municipality building. 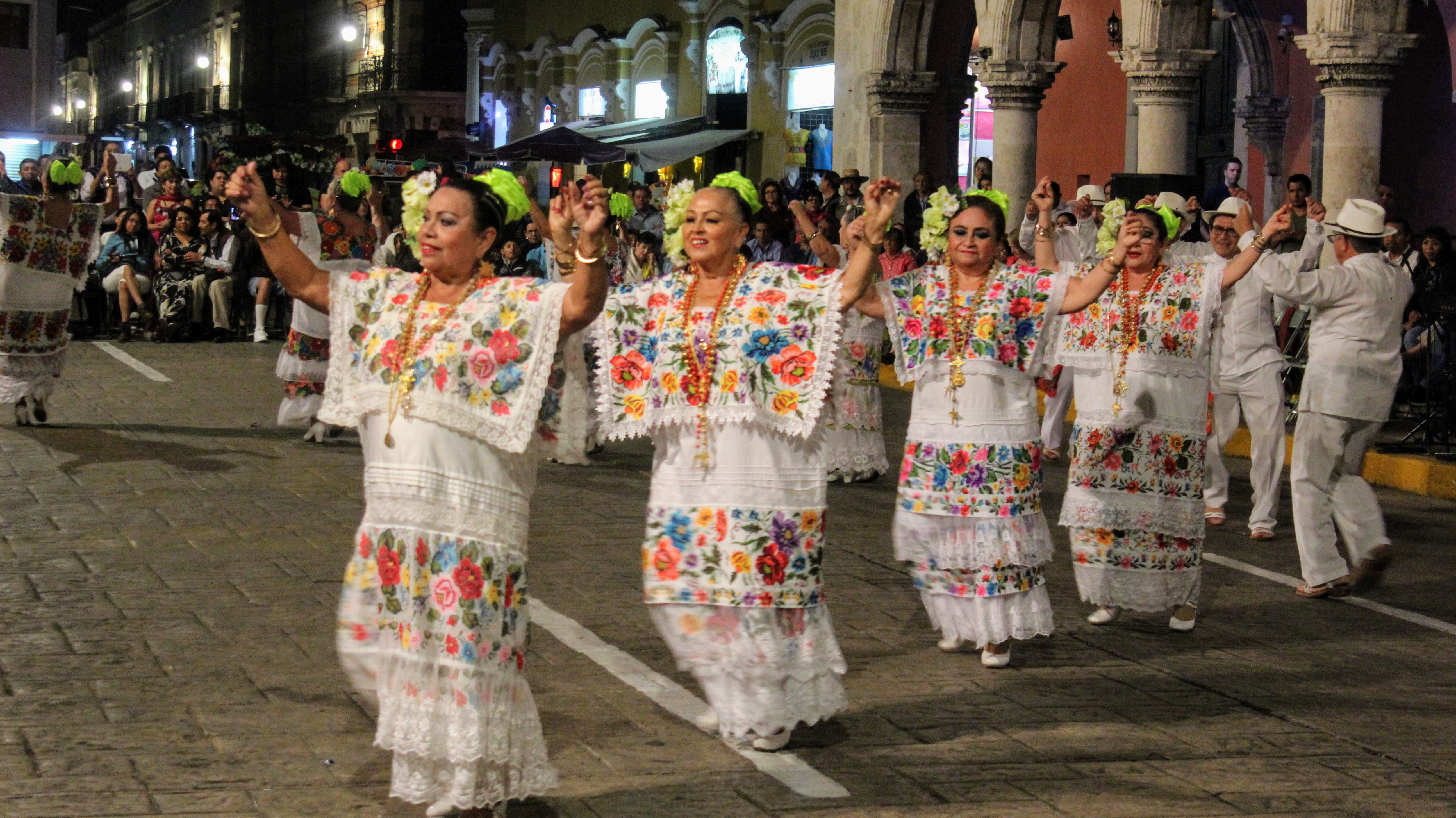 The bottle dance seems to originate in the time of the conquest, when the Maya were made to put on their heads a bottle and dance, as an entertainment for the Spanish visitors and troops.

Pain and humiliation turned into pride. More than anything, Merida is a living, breathing testimony to the incredible syncretism of Mexican culture.