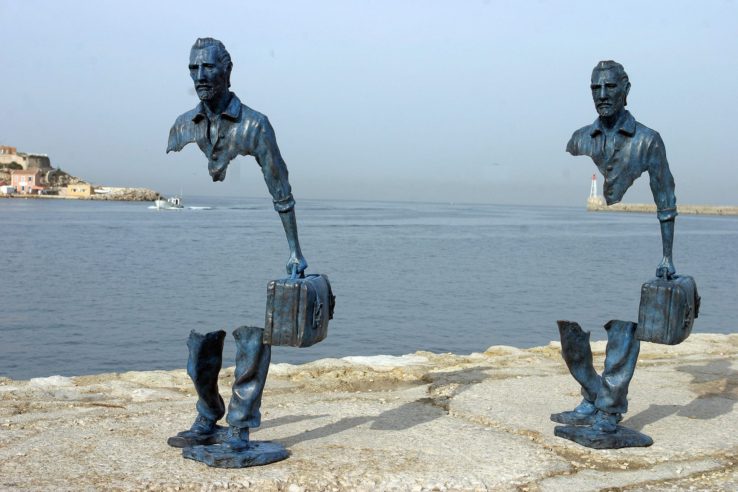 Last Saturday, as usual for Saturdays, I took my son to my parents home. We had lunch consisting of mashed potatoes and meat cutlets – the staple dishes in my parents’ Russian cuisine. My dad read a couple of children books to Ayan. My mom reminded me of my commitments the next week and worried that I don’t exercise enough. All as usual. The same familial ritual that occurred hundreds of time before. But something was different. I wasn’t in a hurry. As a matter of fact, I wanted to stay longer.

The closer and more real our departure gets, the more I value the time I spend with my parents. Every visit, every casual drop by is meaningful. Meeting your family every weekend is usually more of an obligation, than something you look forward to. How many times I occupied myself staring at the smartphone, instead of being present. But the reality of soon having 10,000 kilometers between us, has made me painfully aware of how precious these last months and weeks are.

Another effect that our upcoming move has had on me is an awakened interest in Israel and the Middle East. For many years I looked for every opportunity to go abroad, to see other places, visit other countries. Israel and this whole region, with its never-ending conflicts, religiousness, overbearing history and overdose of ideology has made me weary. I haven’t been in Jerusalem ever since my school trips there. I haven’t been to the Dead Sea for even longer. Yes, I would go often hiking in Galilee, but that was just an excuse to meet friends and have a picnic, rather than an interest in what the North of Israel has to offer.

But that changed when our plans started taking concrete form last year. Suddenly, I started noticing that there is so much here that I missed. Last summer we went to visit the Christian sites of Jerusalem, which I have never done. We went to Jaffa, not just to have a good time with friends, but actually to see it. We discovered the American colony in Tel-Aviv and visited its museum. In October I traveled to Petra for the first time, even though Jordan is open to Israelis for more than 20 years. Its red deserts, camels, Bedouins on donkeys and Nabatean tombs have reminded me just how romantic the Middle East can be, if you see it with the eyes of a visitor.

We have been to Beit She’arim, the ancient Jewish necropolis for the first time, even though it’s just 20 minutes drive from our home in Haifa. We went to the Dead Sea in November, visited the Qumran caves and heard the story of the discovery of its famous scrolls. Normally, I wouldn’t be that interested, but this time I was. In March I went on a 17 kilometer trek to see the Mar Saba monastery. Unknown to many Israelis, and visited by even less due to its location in the West Bank, this is easily one of the most impressive sights in the region. Would I make the effort to visit it in other circumstances? I’m not sure.

There is a Romanian restaurant in Haifa’s downtown, called Mamaliga. I’m sure I’ve seen it hundreds of times, passing it by foot and by car, time and again. And never has the thought of actually going inside and checking it out, occurred to me. Recently we went there to find out what Mamaliga, the dish, is really like. It turned out to be a corn porridge in a sour cream dressing. Most Israelis would probably find it odd, but to my Russian taste buds, it was perfectly edible. The point is, I have become curious about the places that surround me.

I can’t believe that in all those years that I have lived here, I haven’t visited an Ethiopian home or learned about the Ethiopian culture, despite meeting Ethiopian immigrants so often on the streets of Haifa. I regret never attending Mimuna celebrations of Moroccan Jews. I am sorry I haven’t visited the Samaritan community and its holy sites on mount Gerizim. I’m ashamed that despite being quite well-versed in the Israeli politics, I haven’t actually visited Hebron or other Jewish settlements and witnessed the situation on the ground. How did I miss all of this in the 25 years that I live here? How did I fall asleep to everything that is around me?

Granted, some of that time I was preoccupied with school, university, army. Being brought up in an immigrant family, academic achievements and career success were far more important to me than discovering other cultures. The terror wave of the 90’s, the second intifada of 2000’s, and the Second Lebanon war also probably made me want to disassociate myself from this region. And part of the blame could be assigned to the educational system, with its saturation of Zionism and Jewish history. But that wouldn’t tell the whole story.

I have lost curiosity and interest in this place because my life felt so permanently connected to it. A catholic marriage inevitably takes out the passion from a relationship. Which is of course an illusion, considering that most of us aren’t really chained to any place, and moving is possible, if not easy. When Oxanna came to Israel 5 years ago, that stirred things for me, because now I could see Israel with fresh eyes – the eyes of a newcomer. It intensified manyfold, when our move abroad started becoming reality. The permanence-induced boredom transformed back to the wonder of a visitor.

Whenever we move to a new place, people wish us to put down roots, to settle down. And of course finding economic stability and creating ties in the new community is important. But maybe we should experiment with keeping the visitor lenses on, wherever we settle. Having a visitor (or a traveler) mindset, it’s easier to stay less judgmental, less territorial and maybe even less anxious. And if we could keep that curiosity and wonder, wouldn’t it make life richer and more fulfilling?

After all, aren’t we all visitors anyway on this pale blue dot of a planet?