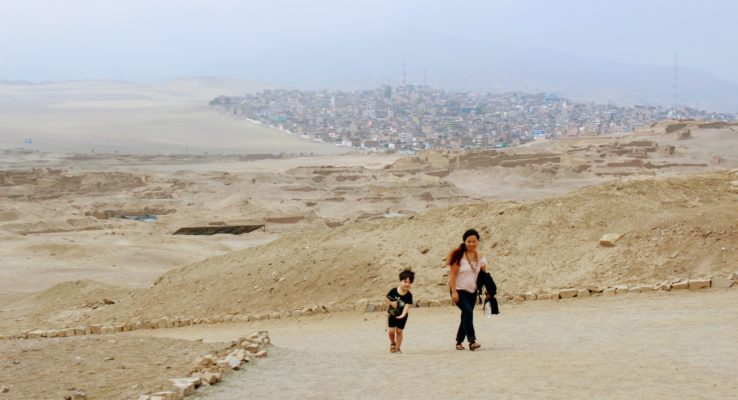 One weekend, about a month after coming to Lima, we took a taxi to the city center. Sitting in the front seat, I was looking out the window. One, two-floor houses with colorful facades and armatures springing from the roofs, always ready to accommodate another floor. Fences painted with the names of politicians running in upcoming or past elections.

Suddenly, I couldn’t recognize where I was. That mental label always attached to our surrounding, fell off. Familiar street turned into a generic urban landscape. What city, what country was this? I knew I was in Latin America, but where exactly? Colombia, Ecuador, Peru? Disoriented, I was watching the cars and streets pass by, trying to reestablish the familiar order. Despite the confusion, the sudden amnesia has also brought a strange sense of calm. My brain, always busy trying to tie everything it encounters into some narrative of local history and culture, finally at rest.

After a few minutes (or seconds?) of disconnection, something switched back. I was again in Lima.

Living on the move is often a confusing experience. A year and half after starting our slow journey through Latin America, the idiosyncrasies are starting to add up.

How do you tell one day from another? Monday from Thursday? March from April? Back in our previous life, I used to meet with my improv group every Wednesday, every Friday we would invite friends to our place, every Saturday we would go to my parents for lunch. Social life, weekend family gatherings, holidays. Regular life carries with it a myriad of rituals and anchors which connect us to the world around.

But when you are traveling for a long time, all such anchors are lost. Monday and Thursday are really the same day. I work in a café or home during the day, in another room Ayan plays with a nanny, Oxanna studies. Apartments change, cities change, countries change, but the days look pretty much same.

Traveling as a family, personal life disappears as well. All the evenings we spend together, either exploring the city or taking Ayan to a nearby park. Always back before 8pm, in time to put him to sleep. Don’t ask me about the nightlife of Mexico City or Quito – I have little idea about it. The times me or Oxanna would go out by ourselves are rare.

What do we get in return? The weekends. For these past 18 months we haven’t spent one weekend the same way as previous. Exploring the Maya temples of Yucatan, the colonial towns of Mexico, the unique alpine grasslands of Colombia, the artificial reed islands of Titicaca. Often, finding ourselves in some dreamlike place, surrounded by sights we never thought would be in our reach, we would look at each other in disbelief, and remind ourselves: “this isn’t a vacation, this is just a regular weekend”, laughing at the absurdity of the notion.

At this point, we saw it all. An apartment in Merida had only hummocks in the bedroom. The landlord was surprised we insisted on beds. The first apartment we rented in Medellin was great – it even had a small room with a desk where I could work. There was only one problem. It didn’t have any windows. Which is perfect for vampires and people with severe skin conditions, I suppose. An apartment in San Miguel de Allende had a toilet but didn’t have a door attached to it. You think that this time you have cleared up everything before booking, but something always surprises you. Note to self: next time ask about toilet doors.

The house we rented in Costa Rica, one hour from San Jose, looked like a tropical getaway in the middle of a jungle. But we soon realized that the only way to survive the evenings, is in complete darkness – unless you want night creatures of all shapes and sizes to descend on you. Turned out, the owners who lived in a house nearby, wouldn’t disinfect their land for ideological reasons. Which is great for tarantulas roaming freely in an around the house, less so for the guests. Compared to that, the smell of bedbugs in every bed was small peanuts.

Our house in Granada, Nicaragua had an “open concept” kitchen. It let in some welcomed evening breeze, but invited mosquitos, frogs and small floods from tropical showers. 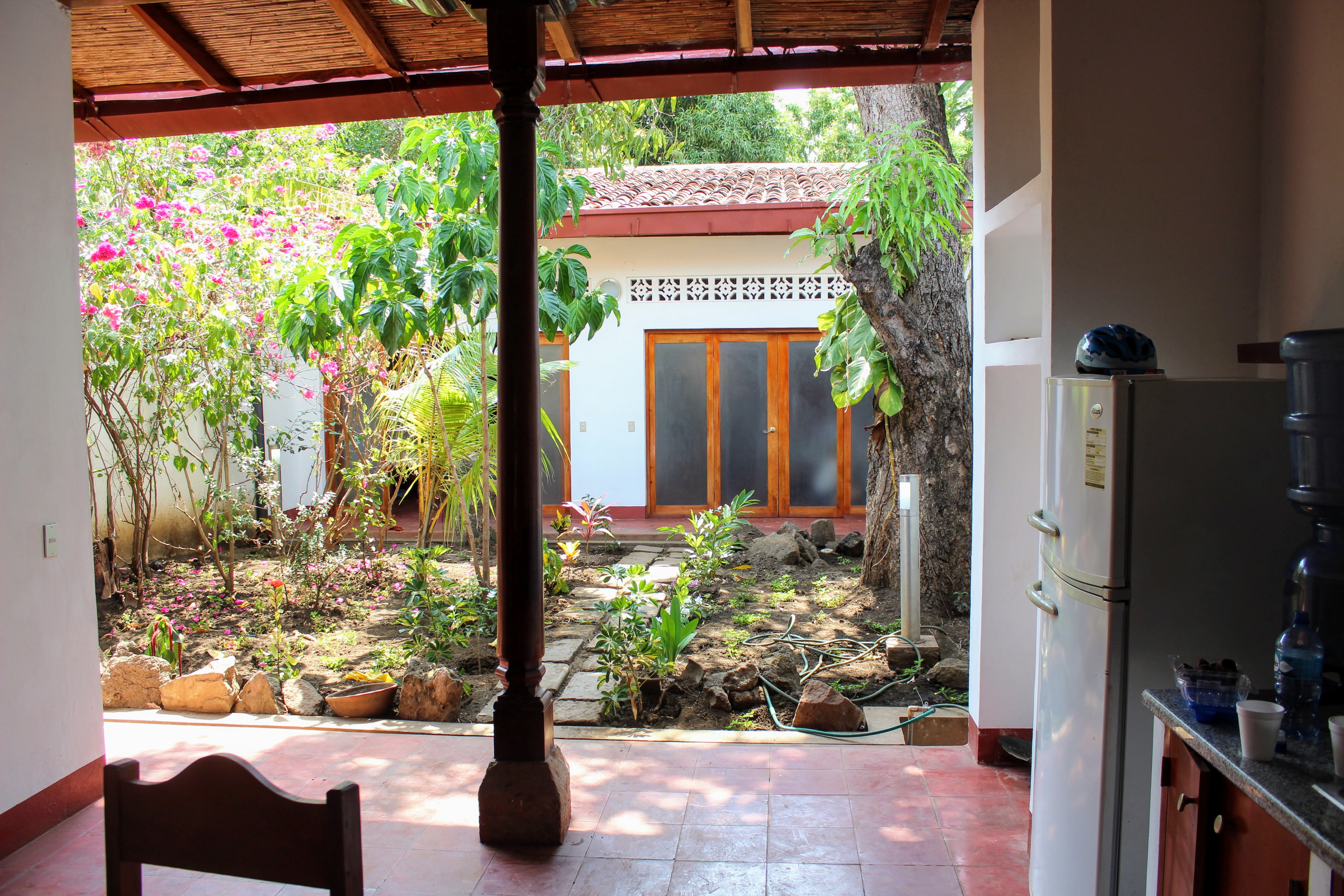 On the bright side, the garden between the kitchen and the bedrooms provided some family members with hours of professional occupation. 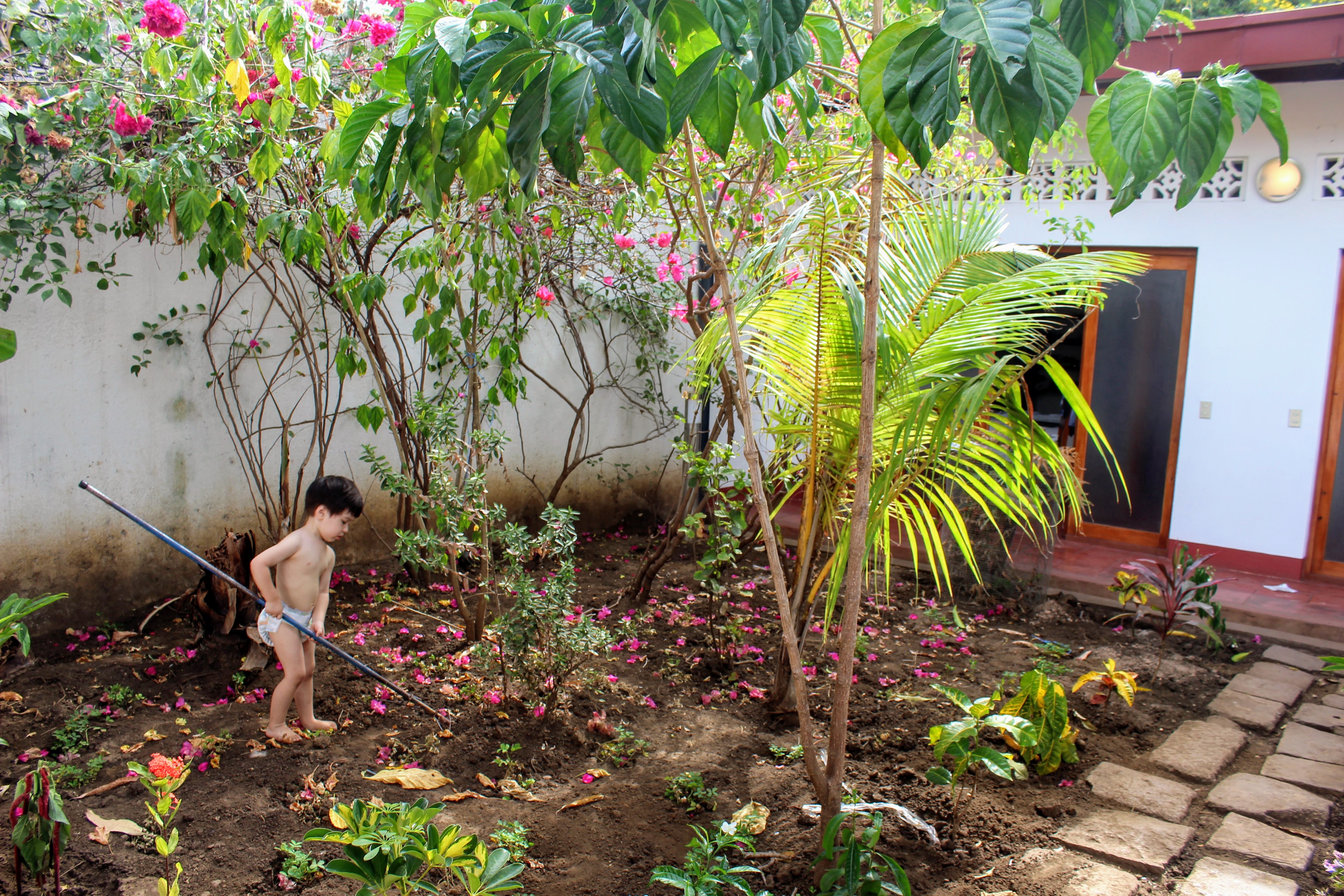 A Song for All Seasons

June on the Caribbean coast of Costa Rica is wet, midday showers are short but frenzied. When the sun sets, closing the windows is imperative, but mosquitos still manage to get through. Covered all over with mosquito bites, I also developed a nagging skin rash on my neck.

Escaping from tropics, we spend July in Bogota. It’s chilly – as is year-round in a city that is 2800 meter above the sea level. Without heating in the apartment, it’s freezing at home. Most of the time I can’t breathe through my nose, carrying with me a never-ending cold. Constantly physically exhausted – only in retrospect realizing it’s altitude sickness. The air is so dry, it absorbs any humidity you have in your skin. For the first time in my life I found a use for an eye-moisturizing cream to remove the lizard scales around the eyes. Traveling with a professional cosmetologist sure helps.

A week later we are in Cartagena, spending August on the Caribbean coast of Colombia. The humid tropical heat doesn’t let go even at night. You cover yourself with sunscreen and seek air-conditioning at the first opportunity. The fruits are fresh, the people are beautiful, but after a month, the constant sauna gets exhausting. Medellin with its never-ending springtime is only a short flight away. So…

With all your wardrobe fitting in a single suitcase (the rest is mostly toys), the only way to cope with all those weather changes, is to develop a pragmatic approach to dressing. It’s based on 3 simple rules:
1) Is it cold? Wear a raincoat
2) Is it raining? Wear a raincoat
3) Is it hot? Don’t wear a raincoat

Adjusting clothing is one thing. Our bodies are used to gradual and predictable season changes, not sporadic and swift climate zone shifts. By now I’m familiar with most brands of flu medications in Latin America. My allergic asthma has become erratic and capricious, lying dormant for weeks, only to attack when you least expect. That strange tropical rash on my neck – still awakes from time to time. A sweet reminder of sorts.

The trail of the belongings we left behind traverses both hemispheres. We lost our first phone in Guadalajara, leaving it on the back seat of an Uber car. The second in Bogota, while moving from one apartment to another. The third in Santiago, again in taxi. Finally, we decided having just one phone in the family is enough.

Having to pack all your stuff and move every month is stressful, no matter how many times you repeat the ritual. In those circumstances, you do stupid things. Moving between apartments in Medellin, I decided that packing an open milk container was worth it. It wasn’t.

Traveling with a child, the chaos spills over into the places where you stay. Sofa cushions will have to be replaced, walls painted over, broken tables paid for. Sometimes we wonder why do people let families with children into their apartments at all.

That “vacation thrill” you used to get in airports and planes disappears. Boarding a plane has become as exciting as getting into a bus. We also have become complacent. As I write these lines, our flight from Buenos Aires to Iguazu Falls is less than 24 hours away, and we still haven’t started packing. In the past, I used to buy a travel guide well before traveling to a new country. These days I find out how the new currency is called upon landing. This isn’t to say that I’ve lost appetite for discovery or learning. Only that the usual traveling rituals lost their appeal.

It’s evening. We are in Santiago, on the 19th floor of our tiny Airbnb apartment, rented till the end of the week. Ayan is asleep. Oxanna is watching something on Netflix. We still don’t know where we’ll end up in two weeks time.

Me (suddenly announcing) : I have news!
Oxanna (suspiciously): what now?
Me (laughing madly): we are going to Patagonia!
Oxanna (wearily): ugh… do we have to?
Me: the tickets are cheap. When will we have the opportunity again?
Oxanna (with a deep sigh): OK. But then we aren’t going to Atacama desert!
Me: deal!

Without a clear plan, with scarcely any preparation, not driven by life-long dreams. We roll from one place to the next on a string of compromises that balance between excitement and exhaustion.

In Bogota we found a very good nanny. Tanya would bring her daughter to play with Ayan, spending mornings together in our rented apartment, making crafts, playing hide and seek. But our month in Bogota soon passed, and we were ready to move on. Saying goodbyes, Tanya lamented: “Just as I got used to your family, to Ayan, you are leaving…”.

We have come to be very good at leaving. Meeting someone, spending time together, becoming friendly, then leaving. At some point I started feeling almost guilty for all the people we “leave behind”. An absurd thought – after all, no one is really left heartbroken, we just share some time together. And yet, I can’t escape the feeling that somehow we “cheat”. Regular tourists, those who come for a few days in the city, spend their time exploring tourist attractions, staying in hotels, eating in restaurants. They don’t make friends, they aren’t invited to people’s homes. They are isolated, therefore harmless. The city shows them its facade, without exposing its soul. A fair deal.

But we come believing we are something more than just tourists, that we are here to learn, to immerse ourselves, to understand. We behave as if we are different, “more serious”. But when the time comes, we leave, just like all tourists do. Easily, without regrets. Absorbing all we could, and moving on.

Unsure аbout where we are heading, unwilling to think beyond the next stop, hypnotized by its internal logic, we continue our slow drift through this magnificent continent. Well, if the world around us is indeed confused, as the name of this blog suggests, maybe it’s fitting we should be as well.