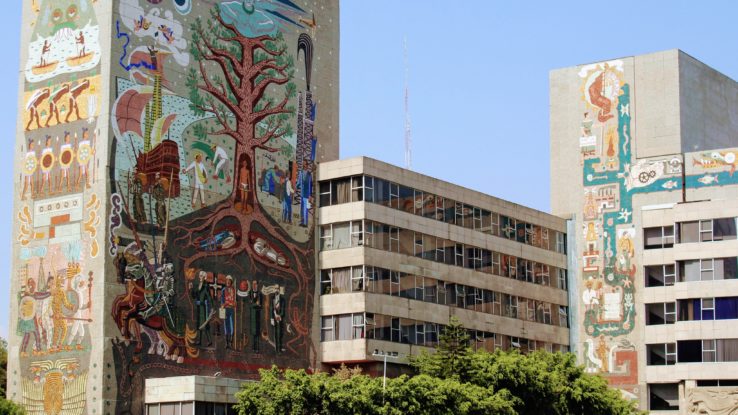 After a week or two in Mexico City, you notice something unique about the city. It’s not the colonial architecture, which is monumental, but still similar to what you can see in Mérida or Guanajuato. It’s not the Aztec temples, which are spectacular, but the Maya temples of Yucatán already prepared you for the splendor of Mesoamerica. Rather it’s the number of seemingly mundane public and government buildings covered with intricate works of art. 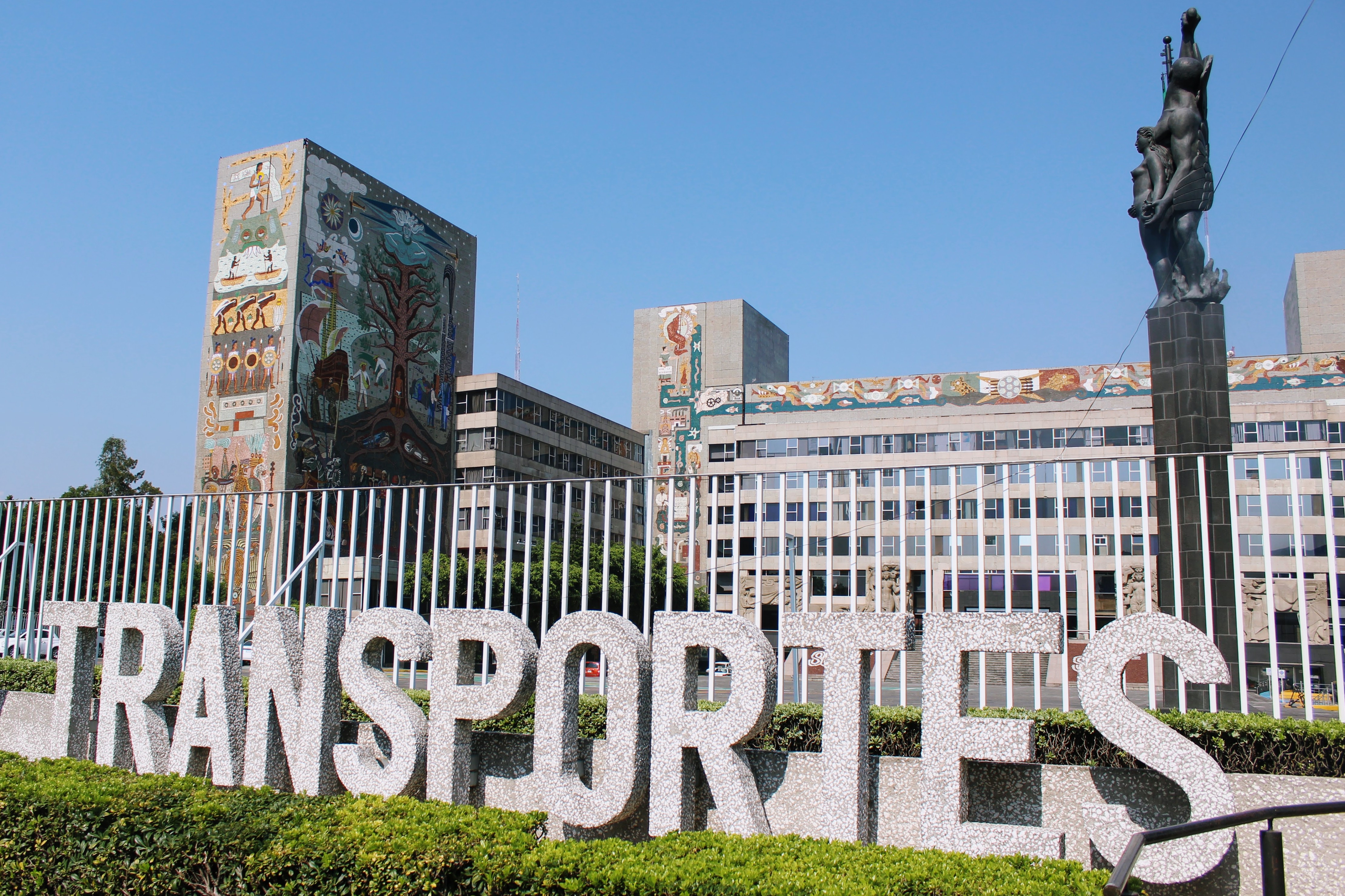 What on Earth could be interesting in a federal government building of the Secretaría de Comunicaciones y Transportes? And yet, as we were passing it by in a taxi, I had to tell the driver to stop, and ran to take a closer look. 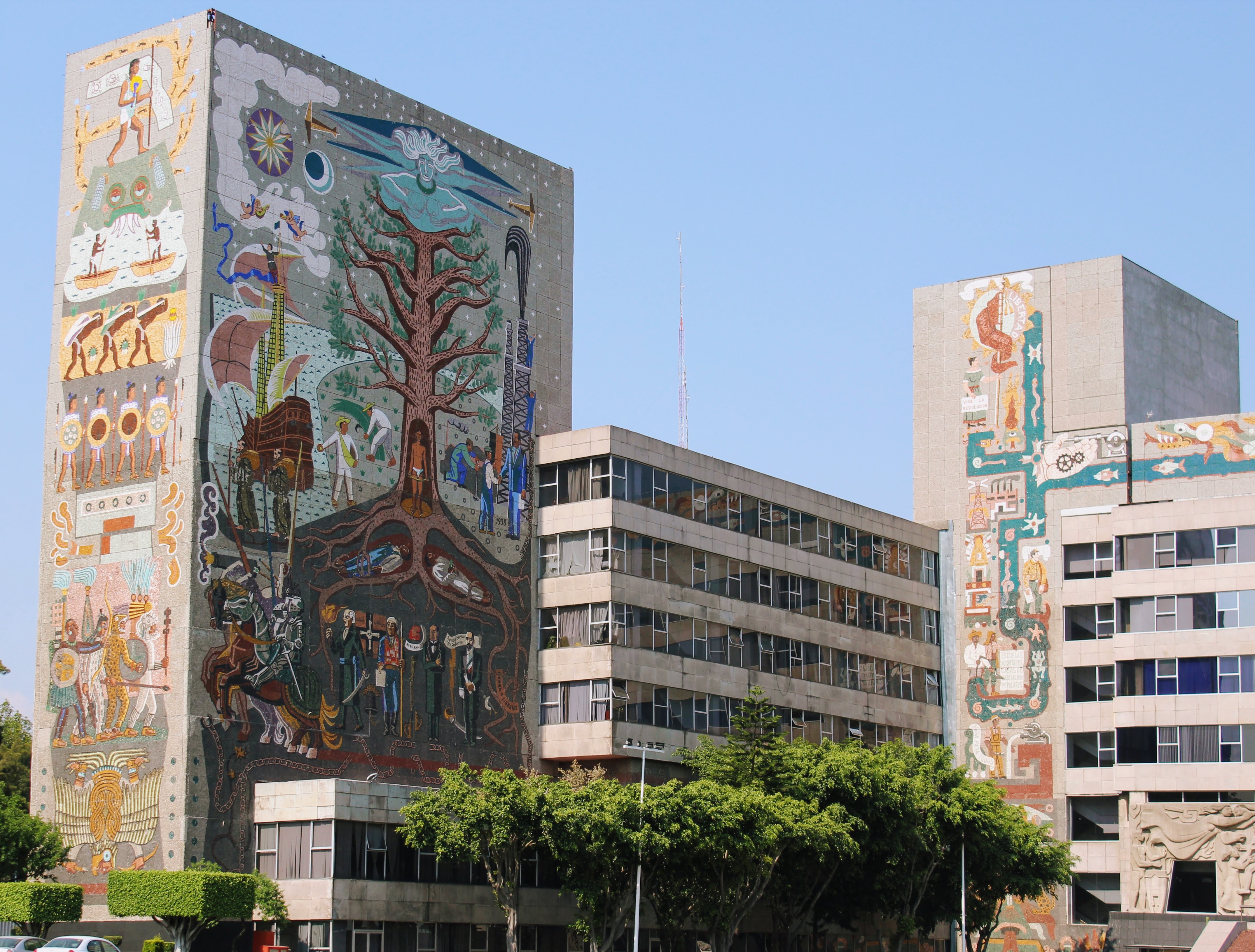 Aztec gods, warriors dressed as jaguars, monks, horsemen, airplanes, oil refineries. I couldn’t tell most of the symbolism, but clearly it was some sort of retelling of Mexico’s history. I was standing with my mouth open. 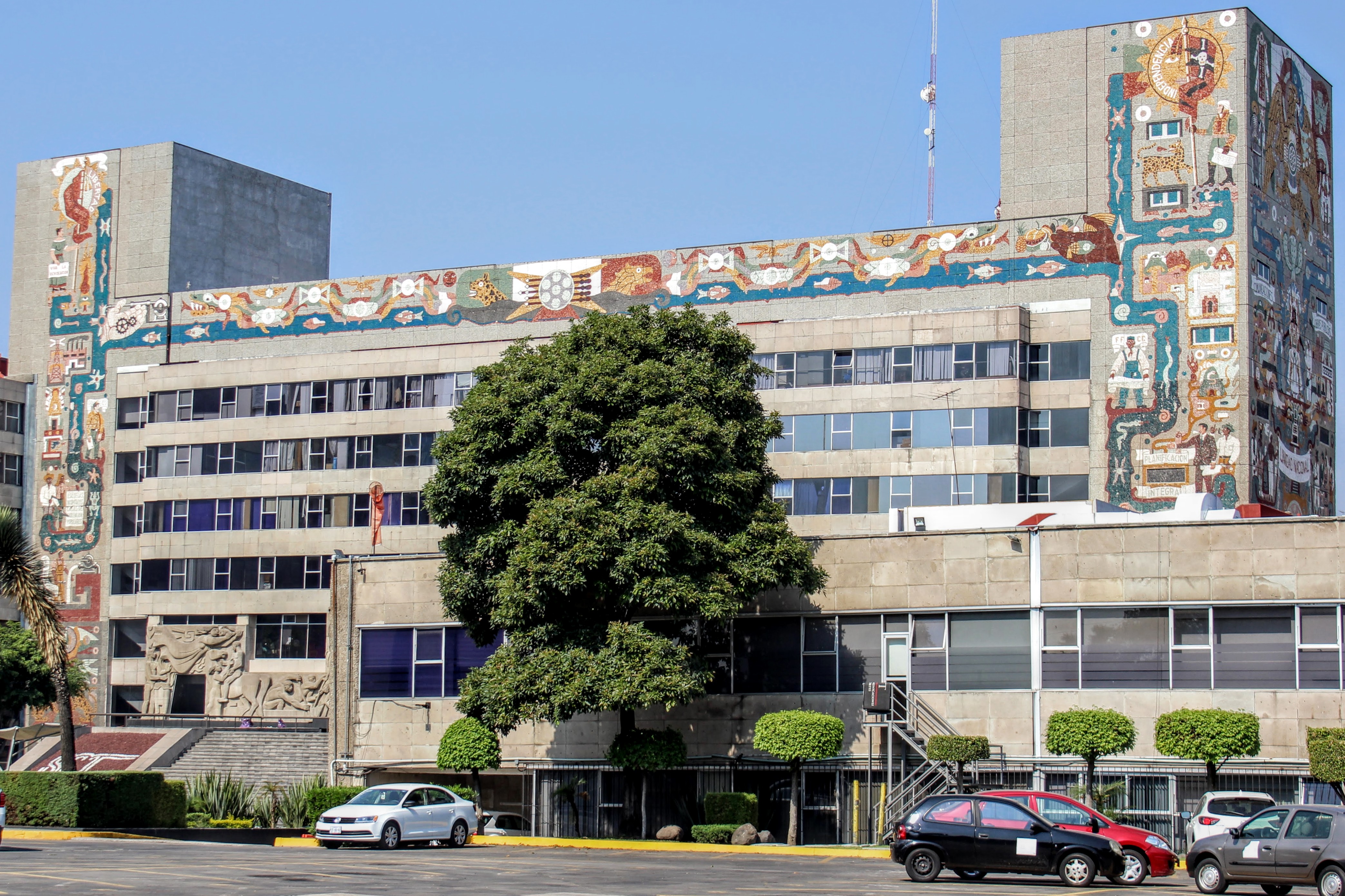 This mix of Soviet-style social realism with Mexican indigenous elements is unlike anything I’ve ever seen. I was hooked. I had to find out more.

The first time I head the name of José Vasconcelos was in Pata Negra, an old library turned pub in the historical center of Mexico City. The six of us, three Mexicans and three foreigners were drinking beer and discussing Mexican history.

Martin, a good-natured bearded intellectual in a black a cap, going for a Marxist revolutionary look, was at the center of the conversation. He was the one who organized the weekly meetup of locals working in city’s cultural institutions and knowledge-thirsty travelers. His post in Couchsurfing group promised a free beer to anyone whose question he and his friends couldn’t answer. And so us foreigners were doing our best. A Brazilian guy was asking about artificial islands built by the Aztec. I wanted to know what all that public art meant, and how did it come to be. That’s when Martin mentioned José Vasconcelos.

One of the most important public intellectuals of post-revolutionary Mexico, Vasconcelos played a decisive role in the promotion of muralism. He believed in the importance of secular, public education, and saw in public art works a teaching medium. Just as monks and missionaries centuries earlier used art to tell biblical stories to convert indigenous Mexicans, this time art was to be used in the promotion of socialism and the creation of a new Mexican identity. The muralists David Siqueiros, Diego Rivera and José Orozco worked together under Vasconcelos, who supported the muralist movement by commissioning murals for prominent buildings in Mexico City.

Growing up as a child in the Soviet Union of the 80’s, my only conception of Mexico came from a small collection of stories about the injustices suffered by the indigenous people and a black-and-white photo of a building. A building unlike any other. Its “owl eyes” channeled a primordial horror which for years transfixed my imagination. 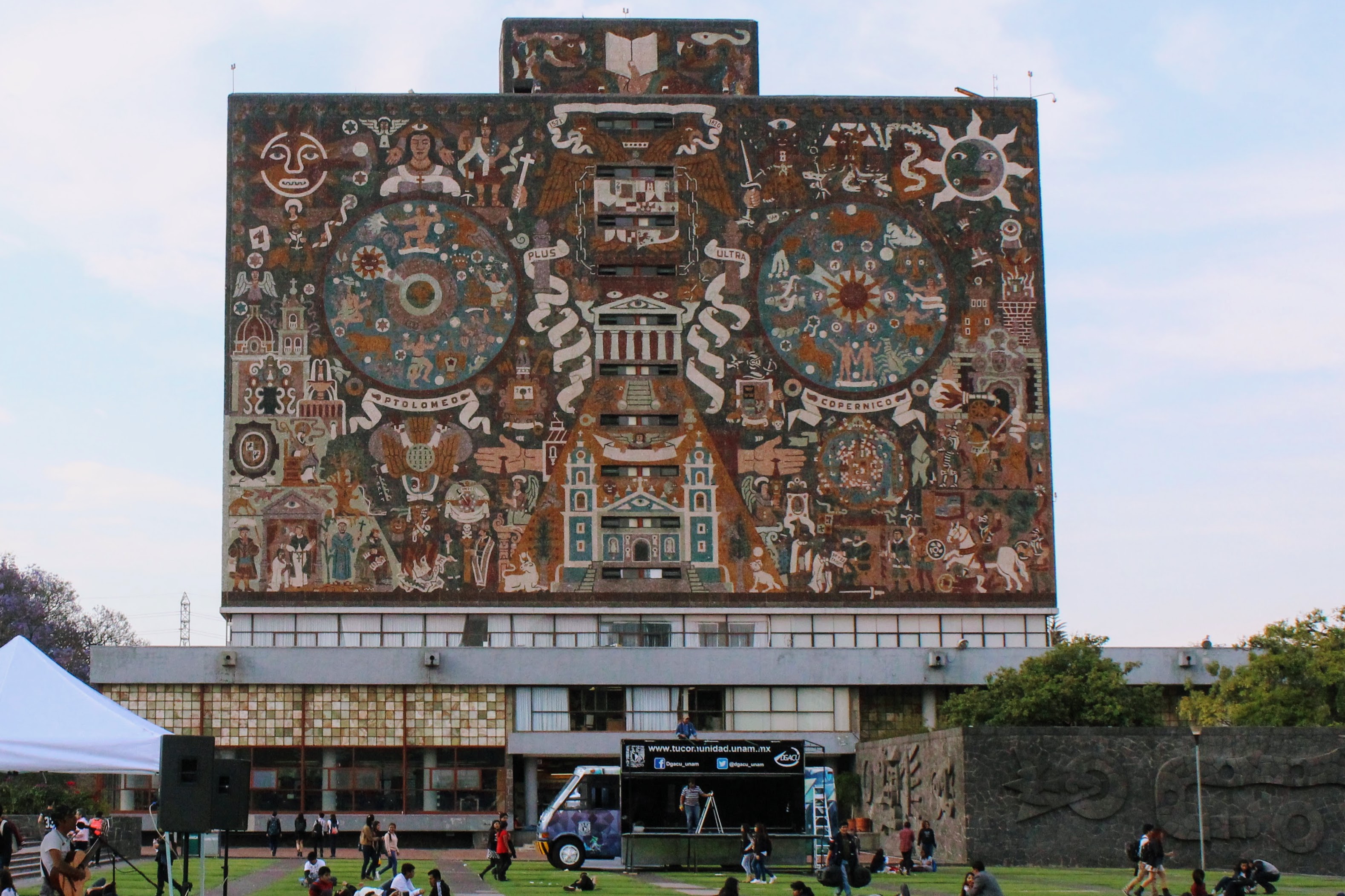 That building is The Central Library of the National Autonomous University of Mexico (UNAM), the most important university in Mexico. The library, built in 1956, was designed by Mexican architect and artist Juan O’Gorman, credited also with the creation of those murals of Secretaría de Comunicaciones y Transportes.
The mural covering the library building, called Historical Representation of Culture, was created out of thousands of colored tiles, something that has never had been done at that scale. In 2007, UNESCO proclaimed the Central Library as World Heritage site. 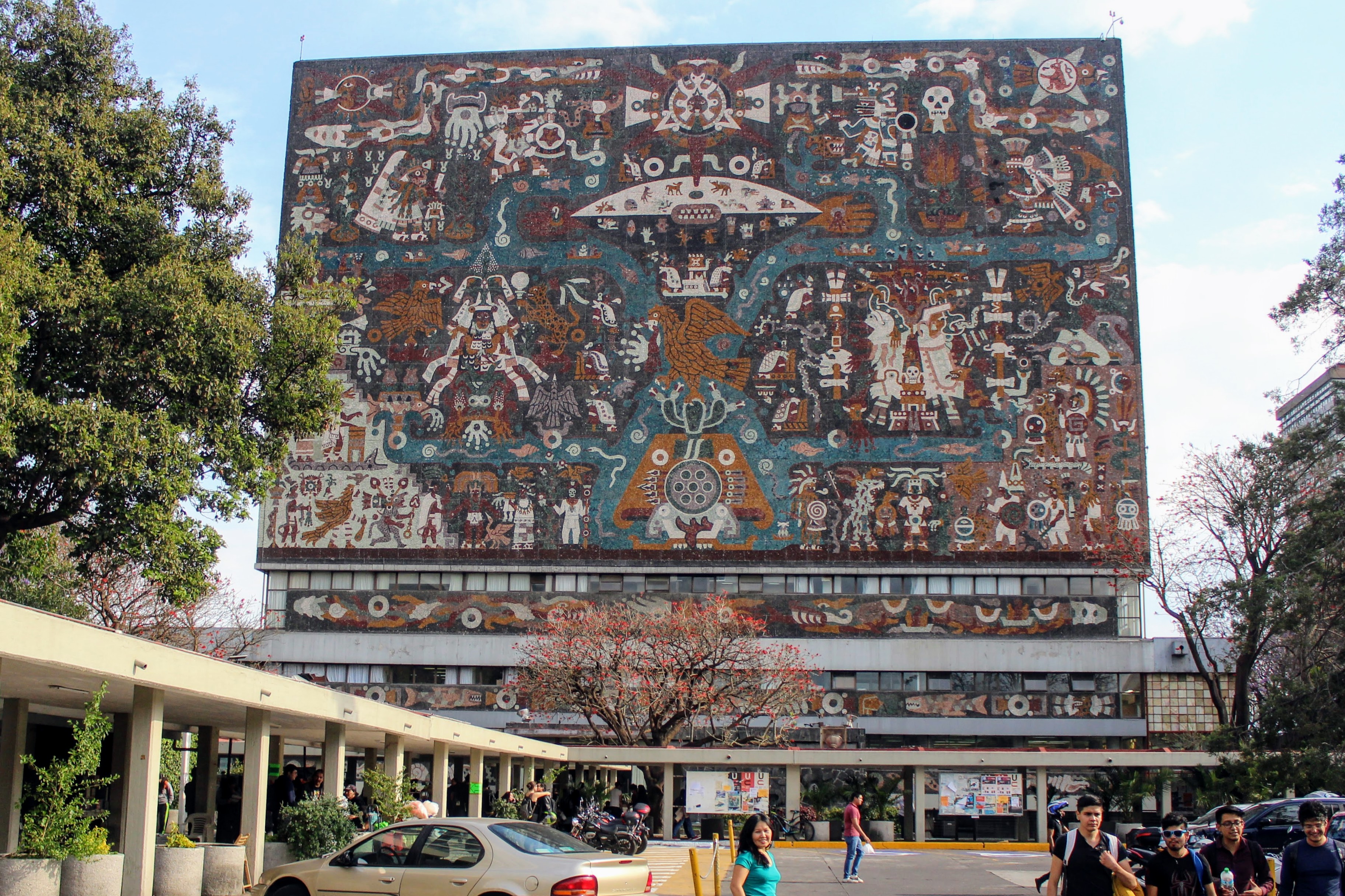 Each of the four walls of the mosaic represent a fundamental historical period of Mexico. The North Wall represents the pre-Hispanic past, and is dominated by mythical elements. This section culminates with the image of the myth of the founding of Mexico-Tenochtitlan, the eagle perched on a cactus devouring a snake.
The South Wall (“the owl eyes”) represents the colonial past and deals with western culture and the dual character of Spanish domination and the colonial era: the pious and spiritual aspect against violent conquest by arms. 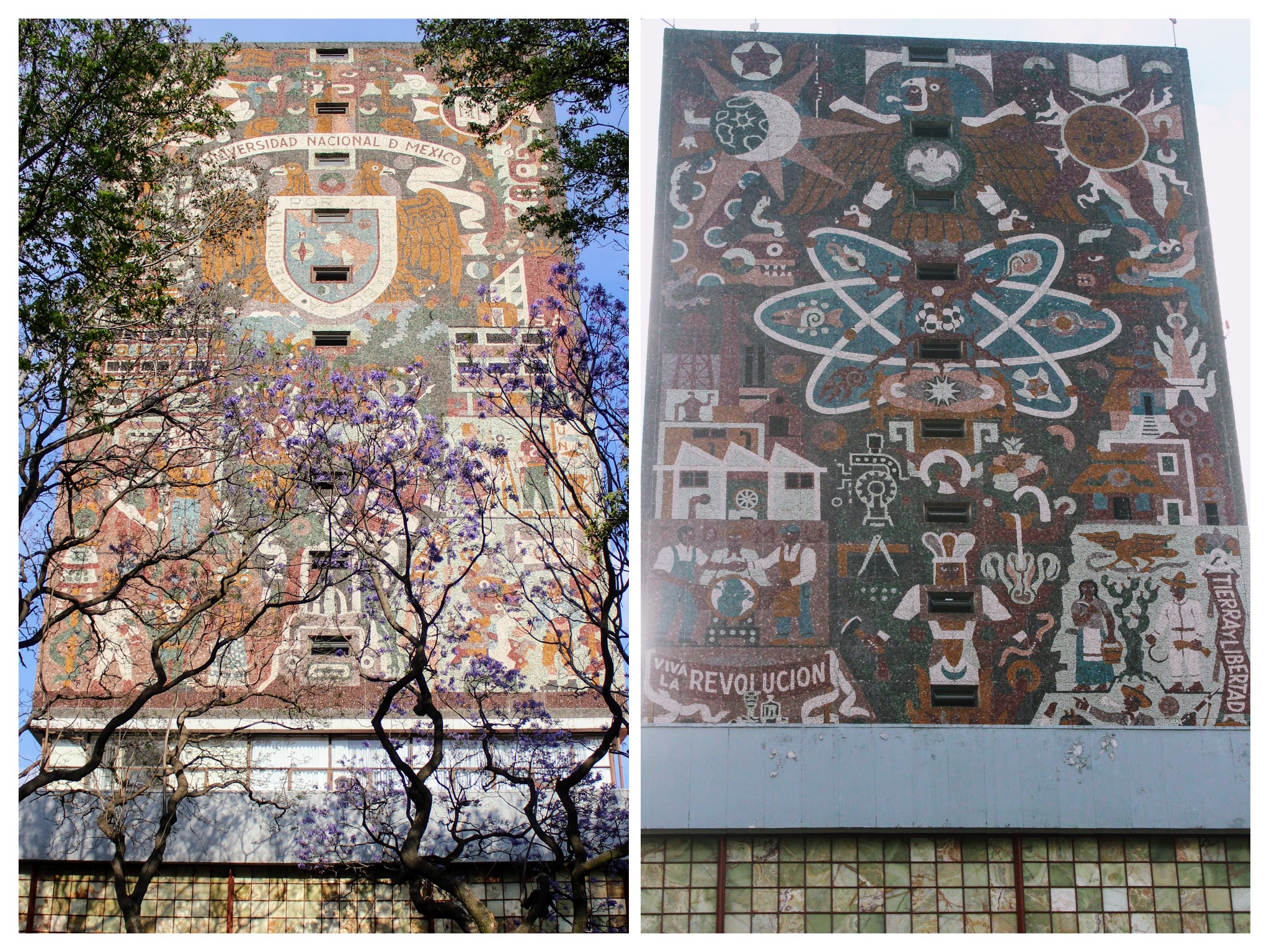 The Eastern Wall (the image on the right) represents the modern world, with its tradition-progress duality, referring to the two aspects of Mexico’s social progress: the city and the countryside. The Western Wall represents the University and current day Mexico.

Expectedly, the campus is a sanctuary of lefties. As you browse between second-hand book lots with volumes about Marxism and the revolution of the proletariat, an unmistakable smell of weed follows you around.

In front of the library, the building of Rectoria boasts its own set of murals. The artist behind them is David Alfaro Siqueiros. A swore Stalinist, he participated in an unsuccessful attempt to assassinate Leon Trotsky in 1940. After doing jail time, he returned to muralism, developing a recognizable painting-sculpture style.

The building on Avenida República de Argentina in the historical center of Mexico City doesn’t look like much from the outside. Guards at the entrance ask you for a photo ID, bureaucrats inside hurry between offices, cleaning stuff scrubs the floors. And you, the only tourist here, stand marveling at the scope of what you see. Two yards, three floors each with walls completely covered with mural paintings from top to bottom. Diego Rivera started painting in 1923, and finished in 1928. As the first minister of public education, José Vasconcelos commissioned the work. 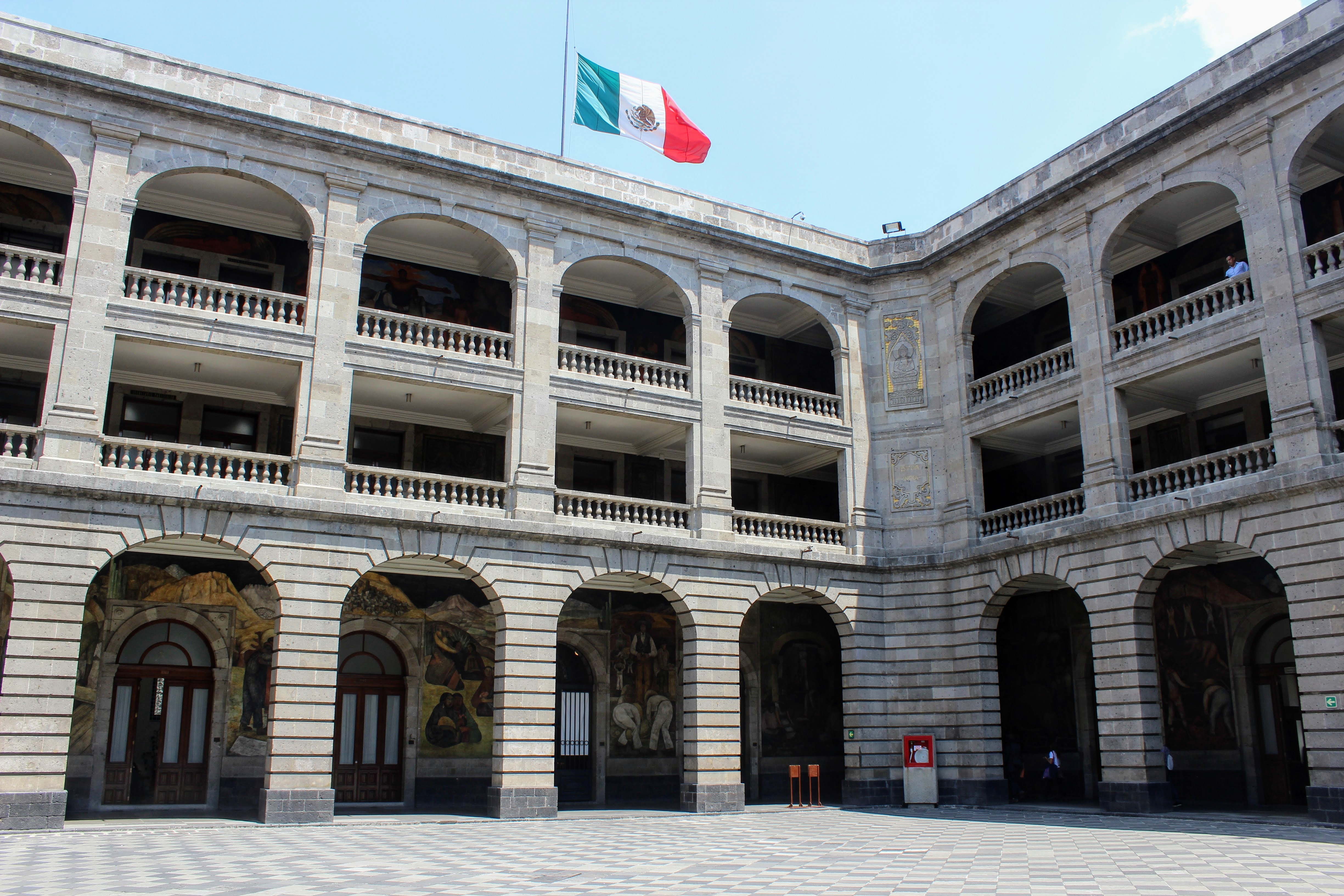 Each courtyard is thematically distinct. The one on the east end deals with labor, industry and agriculture.

The top level has a series of murals on the excesses of the capitalist class and the inevitable proletarian and agrarian revolution. Underneath, a continuous red banner is emblazoned with a Mexican folk song. 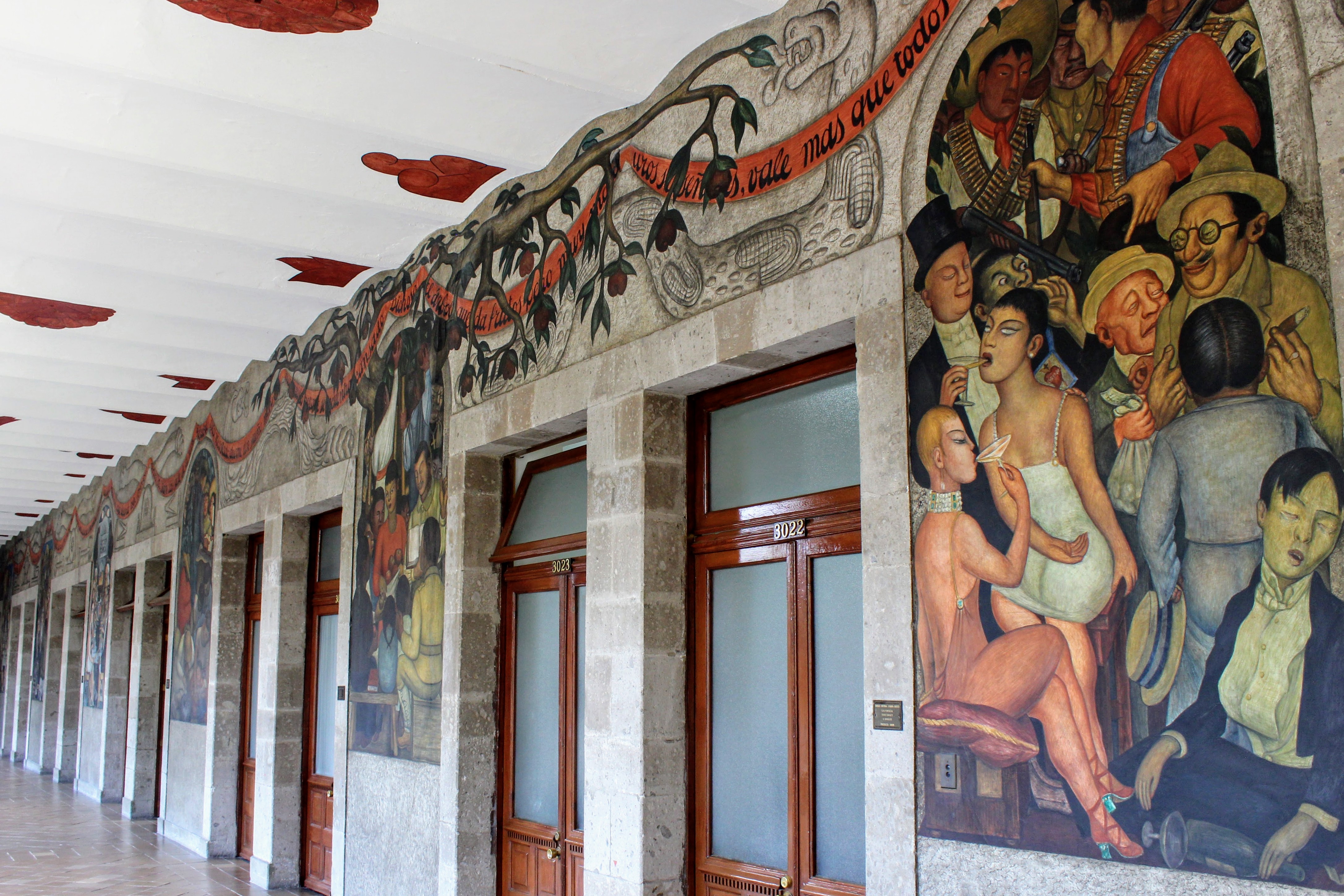 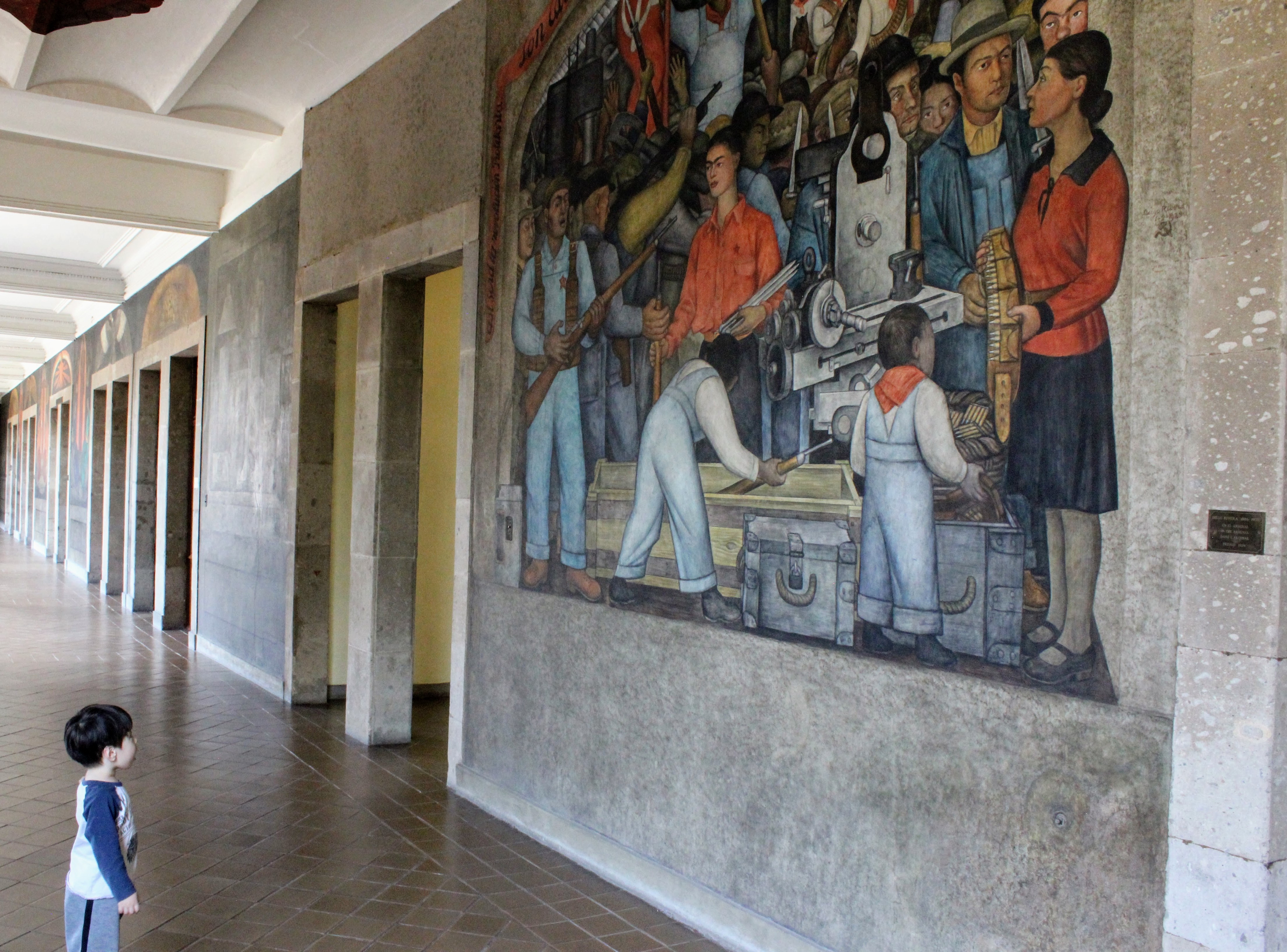 Note the female figure in a red shirt in the center of the last painting. She bears more than a passing resemblance to Frida Kahlo. 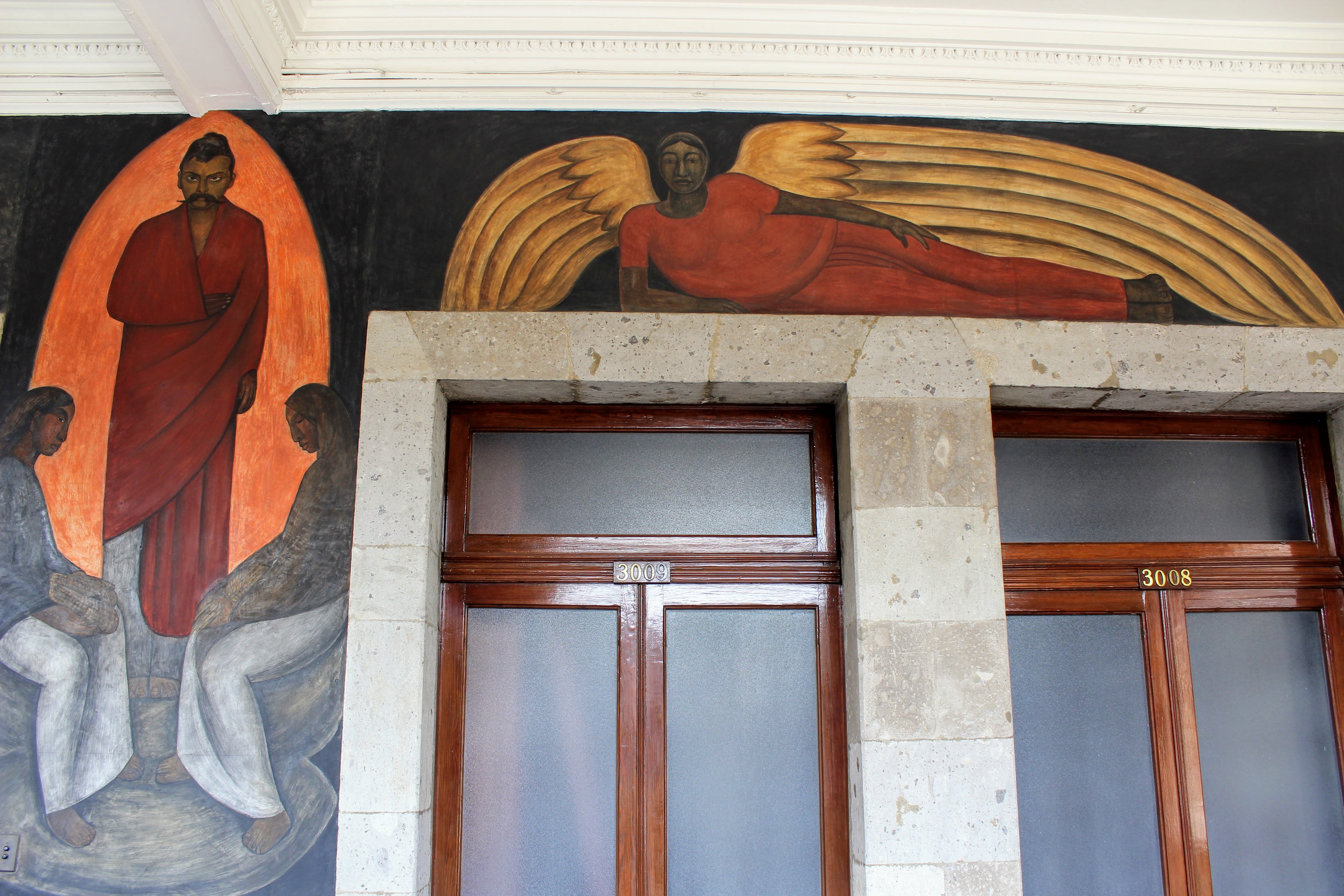 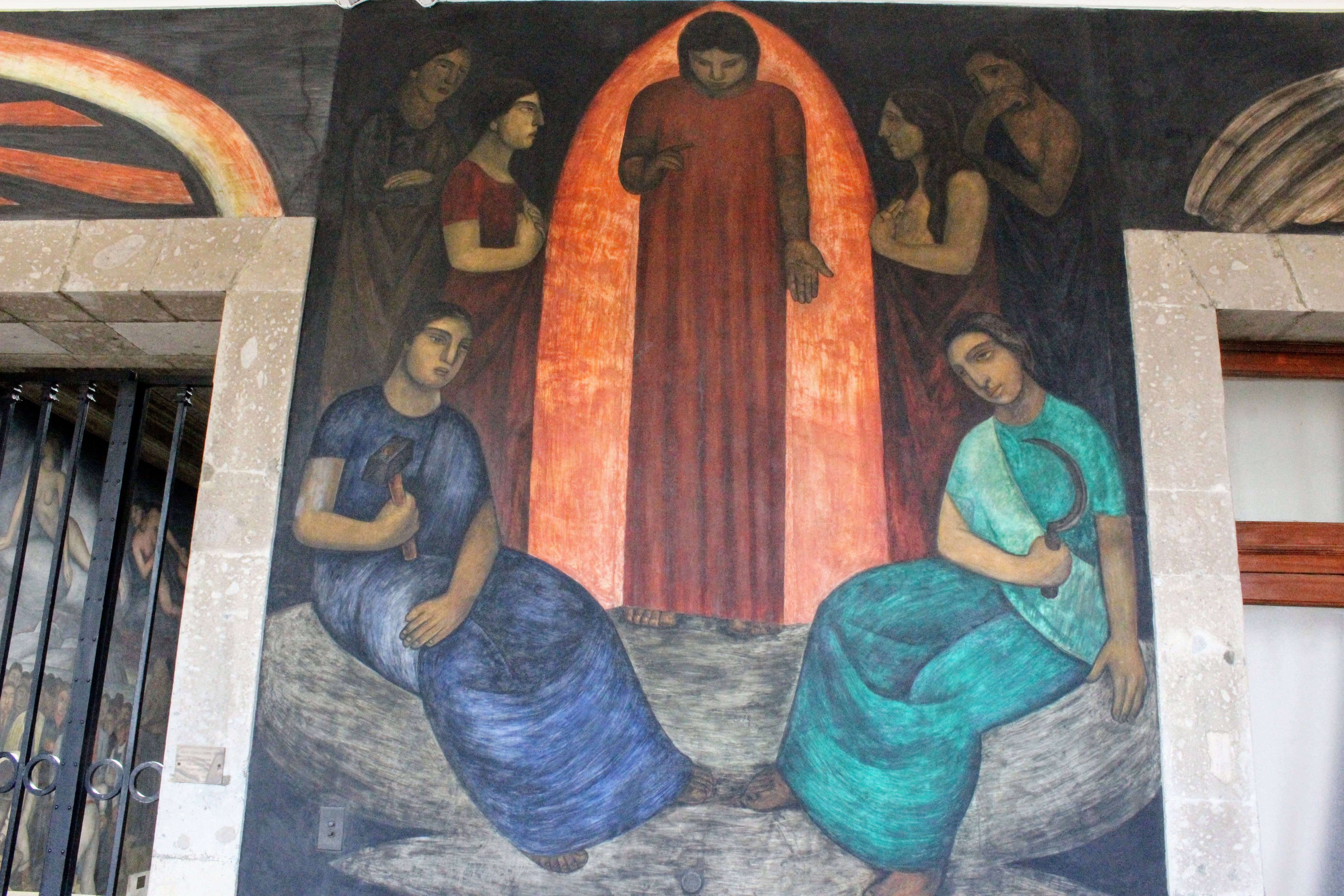 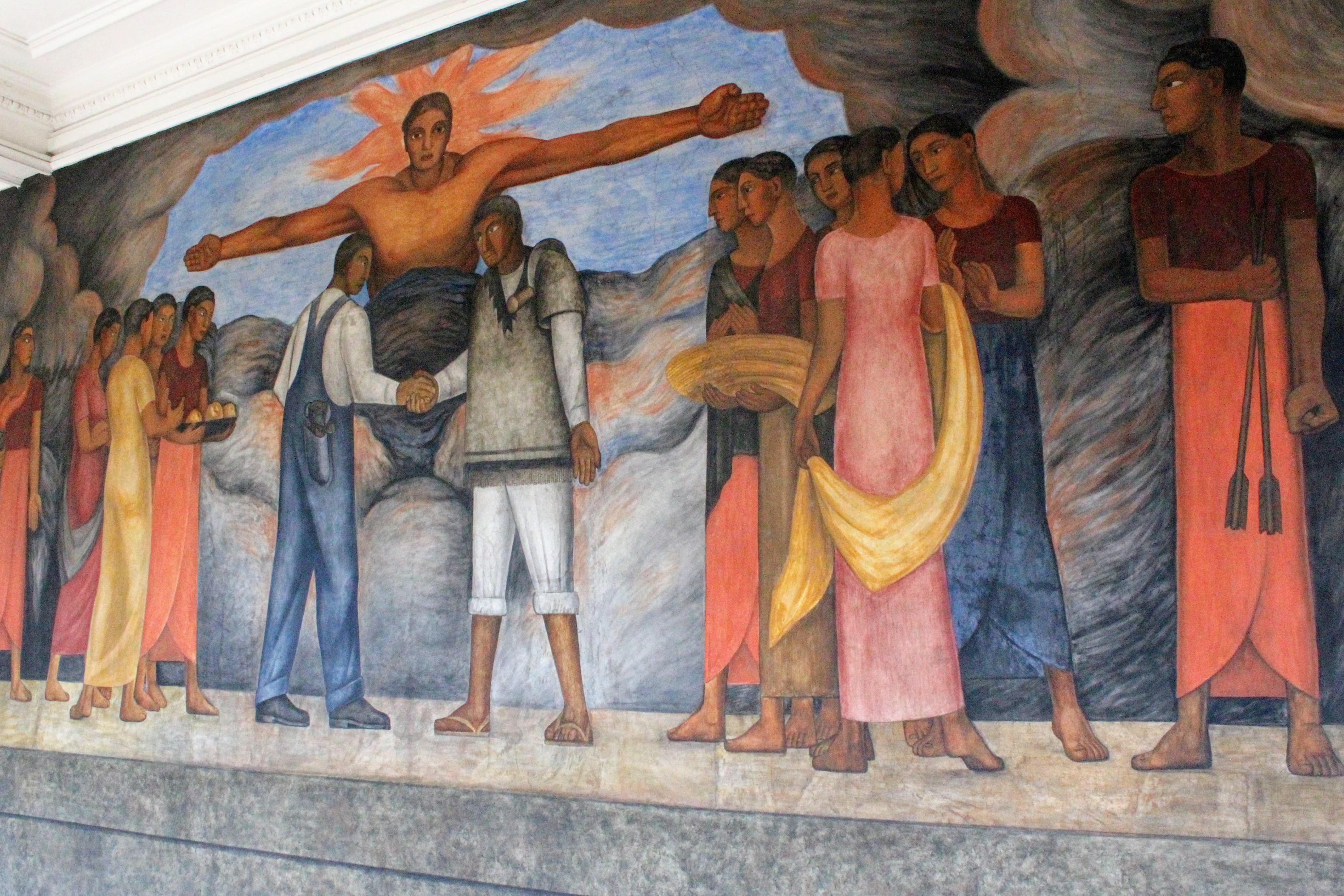 Who said only government building make for a good mural backdrop? The residential blocks in Tlatelolco prove otherwise. We got here one Saturday morning on a different mission – to see the ruins of Tlatelolco, the Aztec sister city of Tenochtitlan, whose ruins we explored earlier in Centro Histórico. But as we were making our way from the metro station through a row of gruesome residential complexes, something else caught our attention. 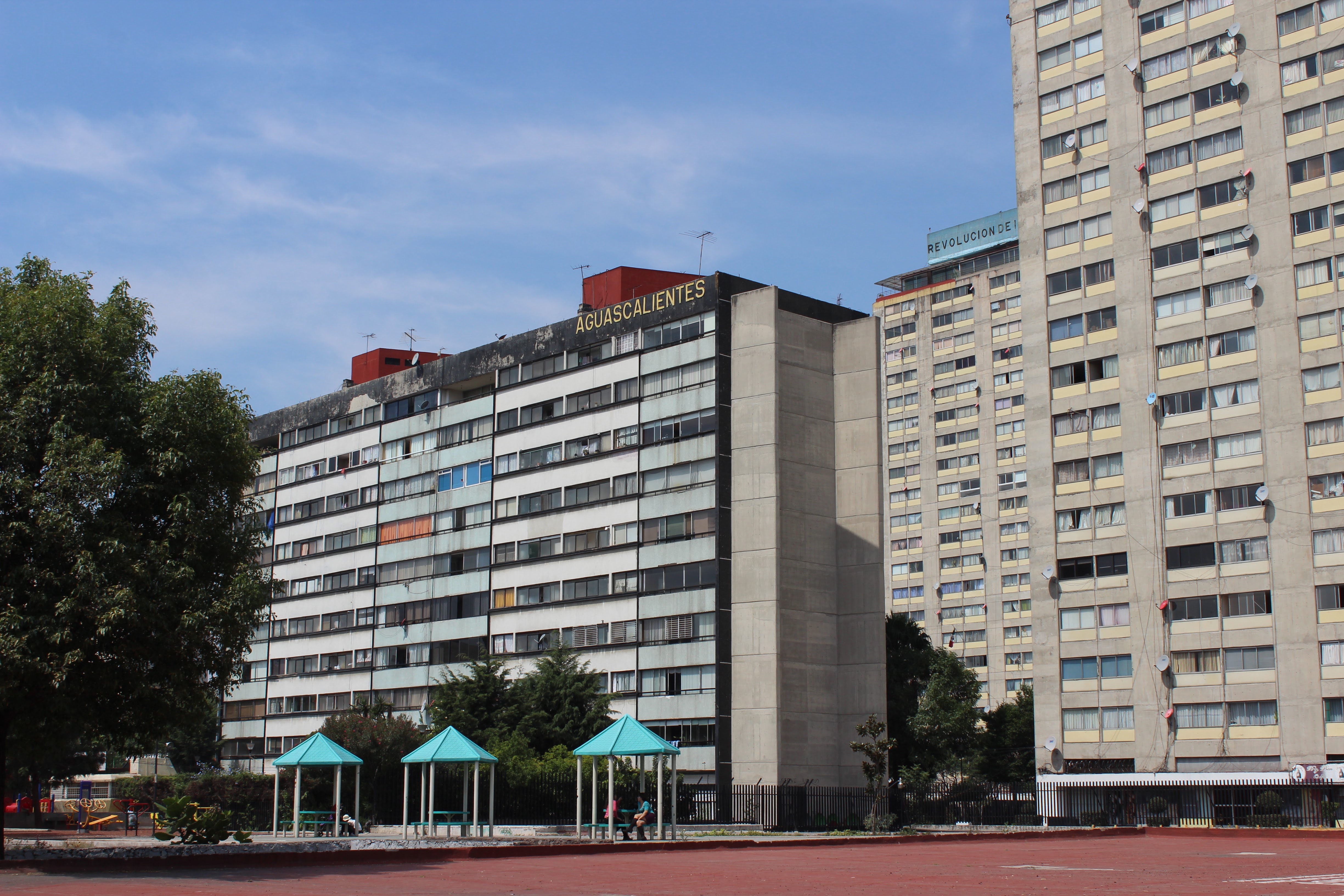 That something – a magnificent 10-story high mural. The favorite muralist themes are all here: the suffering of the past and the present, the breaking of chains and the birth of a new man. Later I found out it’s called “Tlatelolco, Roots and Expression of México”, painted by a Mexican muralist Nicandro Puente in the late 90’s.

Puente painted two additional murals on the nearby buildings. The second one (on the right) is called “Homage to Woman”.

The third mural is his most ambitious. Called “Tlatelolco 1985 – Earthquake and Resurrection” it evokes the memory of the destruction the 1985 earthquake sowed in the neighborhood. Taking an entire back side of a building, it is simply breathtaking.

Back in Centro Historico, Palacio de Bellas Artes houses some of the finest murals in the city. 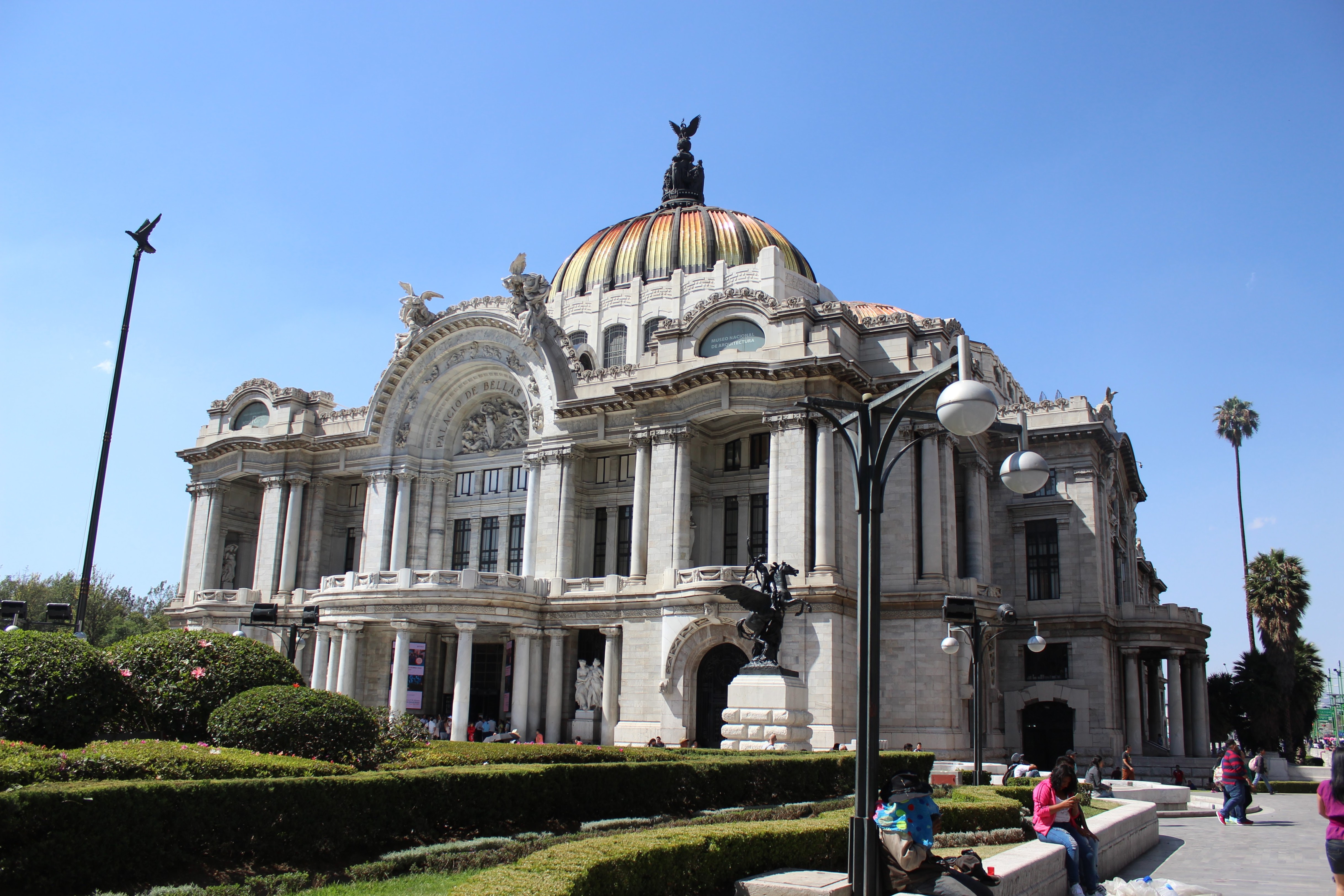 From the ground floor to the uppermost floor, the walls are dominated by expansive muralist works. 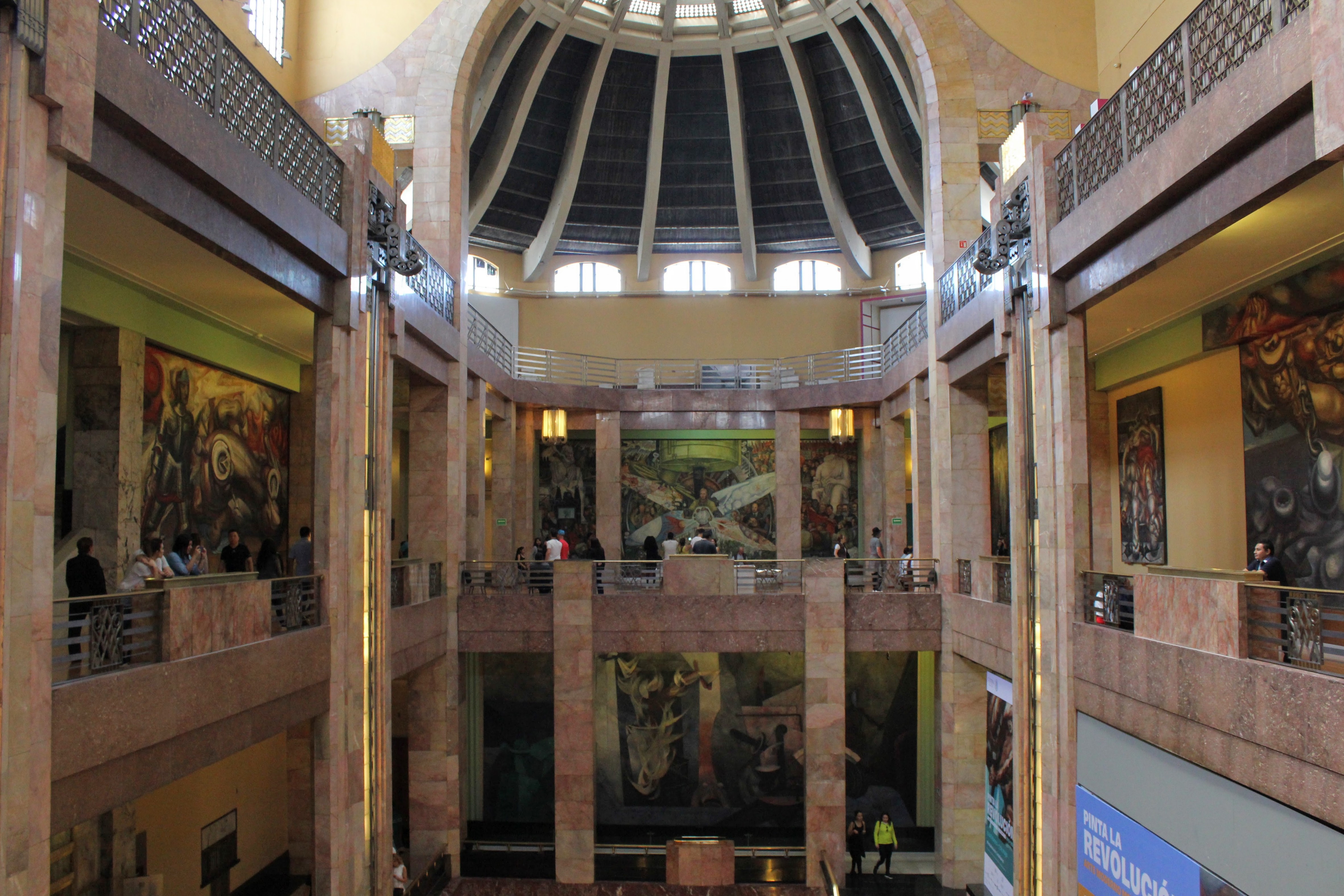 Rivera’s “Man at the Crossroads” (1933) has an interesting history. It was initially slated to be installed in the lobby of 30 Rockefeller Plaza in New York, ordered by the Rockefeller family who admired Rivera’s work. But then he decided to include Lenin in the composition, and refused to remove him despite repeated requests. Only black-and-white photographs remain of the original incomplete mural, taken when Rivera was forced to stop working on it. Using the photographs, Rivera repainted the composition in Mexico. With Lenin, of course.

In “Carnival of Mexican Life” (1936) Rivera turns to his favorite subject of Mexican festivals. His other famous carnival-themed work “Dream of a Sunday Afternoon in the Alameda Central” is housed in his museum, a hundred meters from Bellas Artes. I wrote about it in a previous post.

“México for Democracy and Independence” was painted by David Siqueiros in 1944 to commemorate an anniversary of  the Mexican revolution. 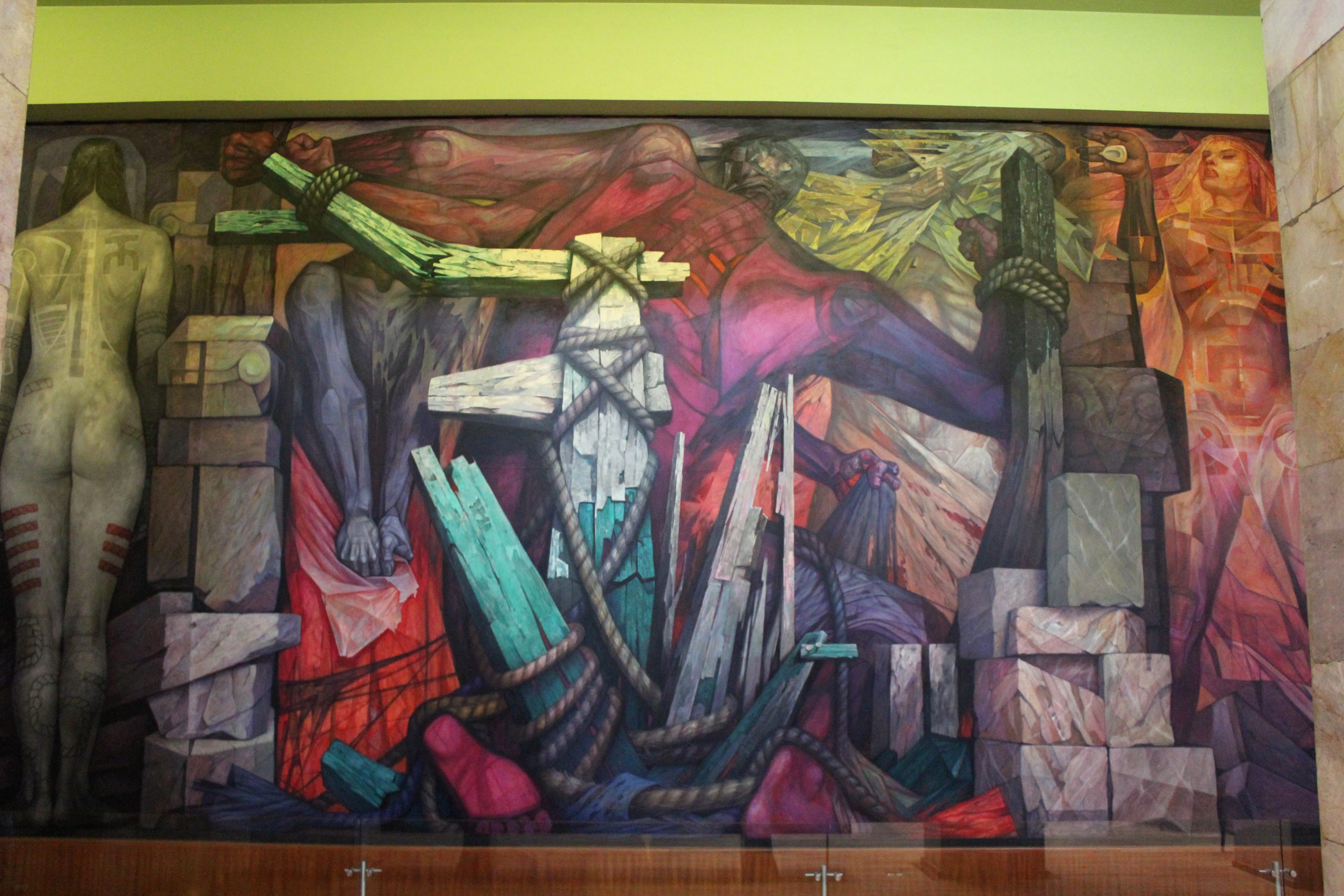 Orozco, whose powerful works we first saw in Guadalajara, stays true to his brutalism, with fire, machinery, murder and nude bodies all abound.

If Mexico City is the Mecca of Mexican muralism, then Polyforum Siqueiros is its black stone. A decagon-shaped construction, it was built in the 70’s to host a large mural work by David Alfaro Siqueiros. 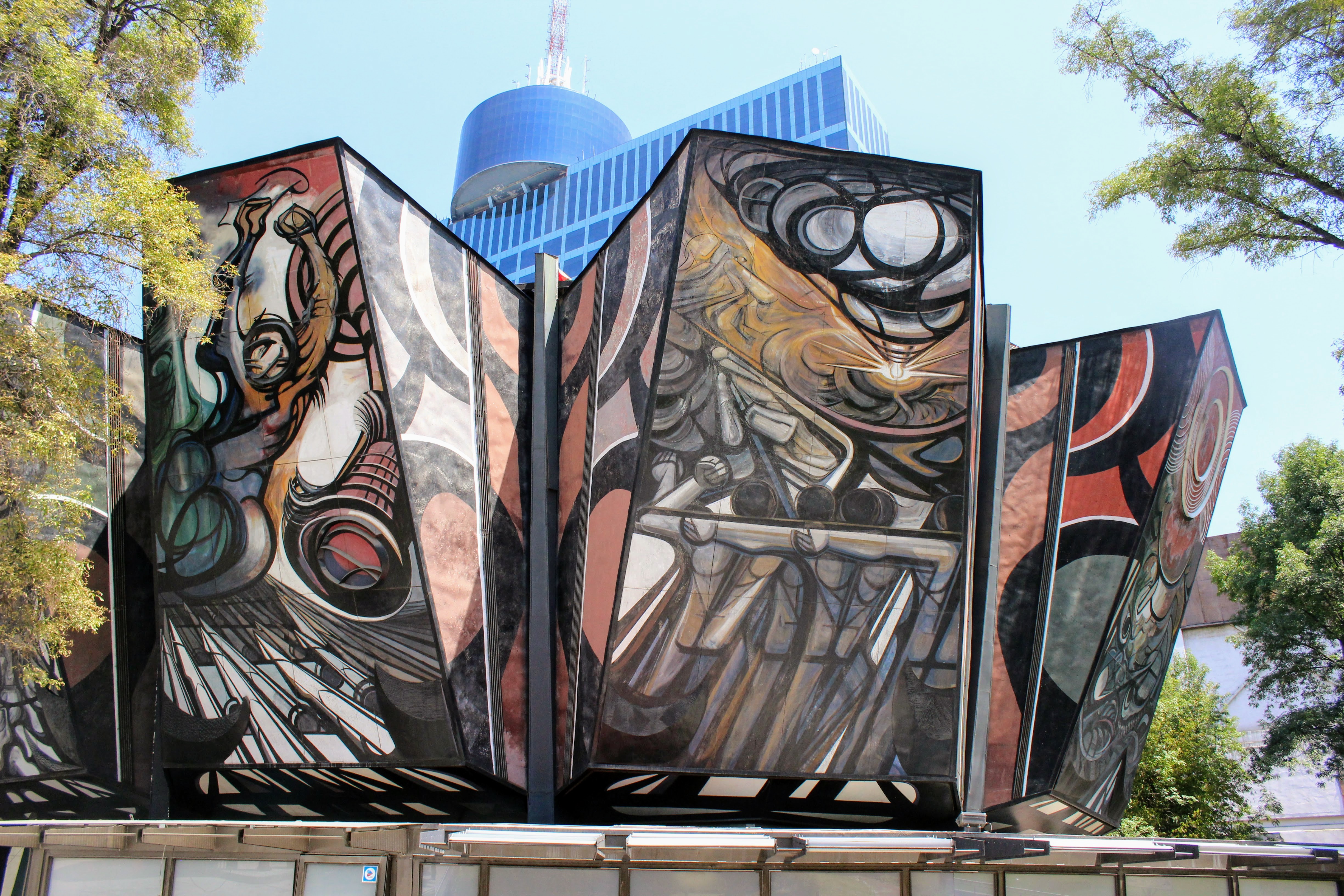 Outside, it features a twelve-faced sculptural mural painting, with each panel representing a different concept.

An outside wall celebrates 50 years anniversary of Mexican muralism (1921-1971) with portraits of its leaders.

Inside, the construction imagined as a multi-purpose space, looks exactly as you would expect from a 70’s futuristic project. 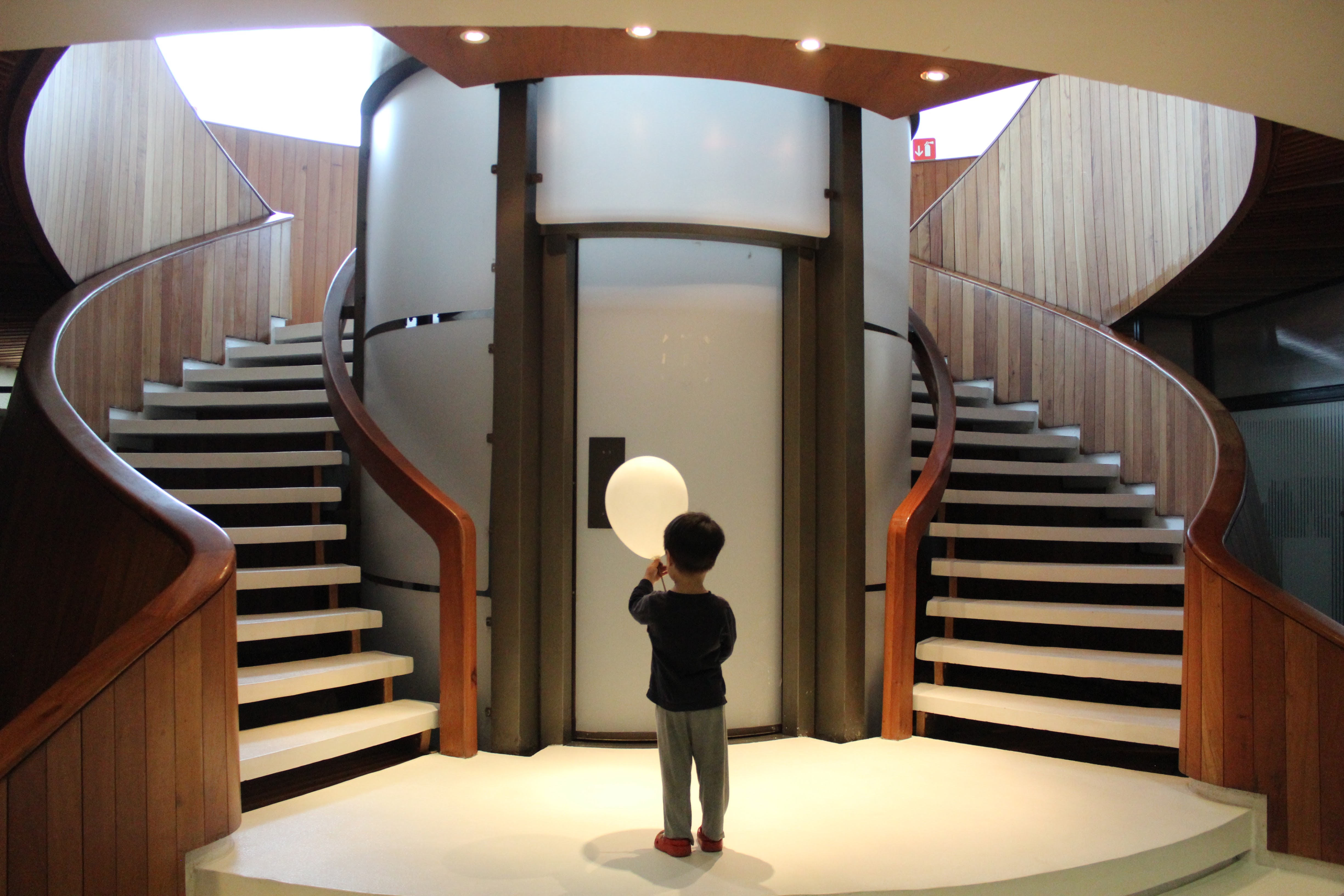 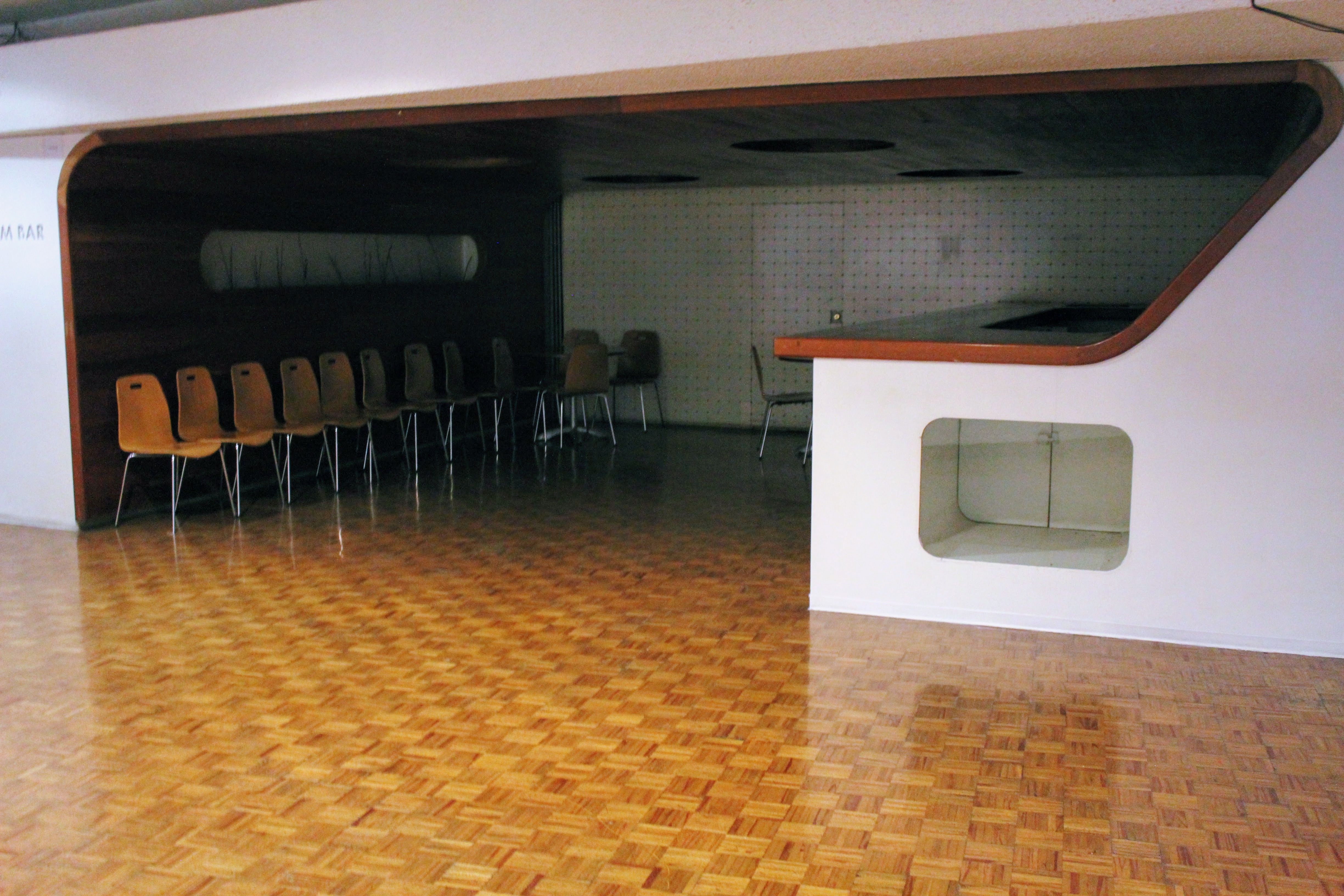 The main space of the forum is a large oval hall that houses Siqueiros’ magnum opus called La Marcha de la Humanidad (The March of Humanity). 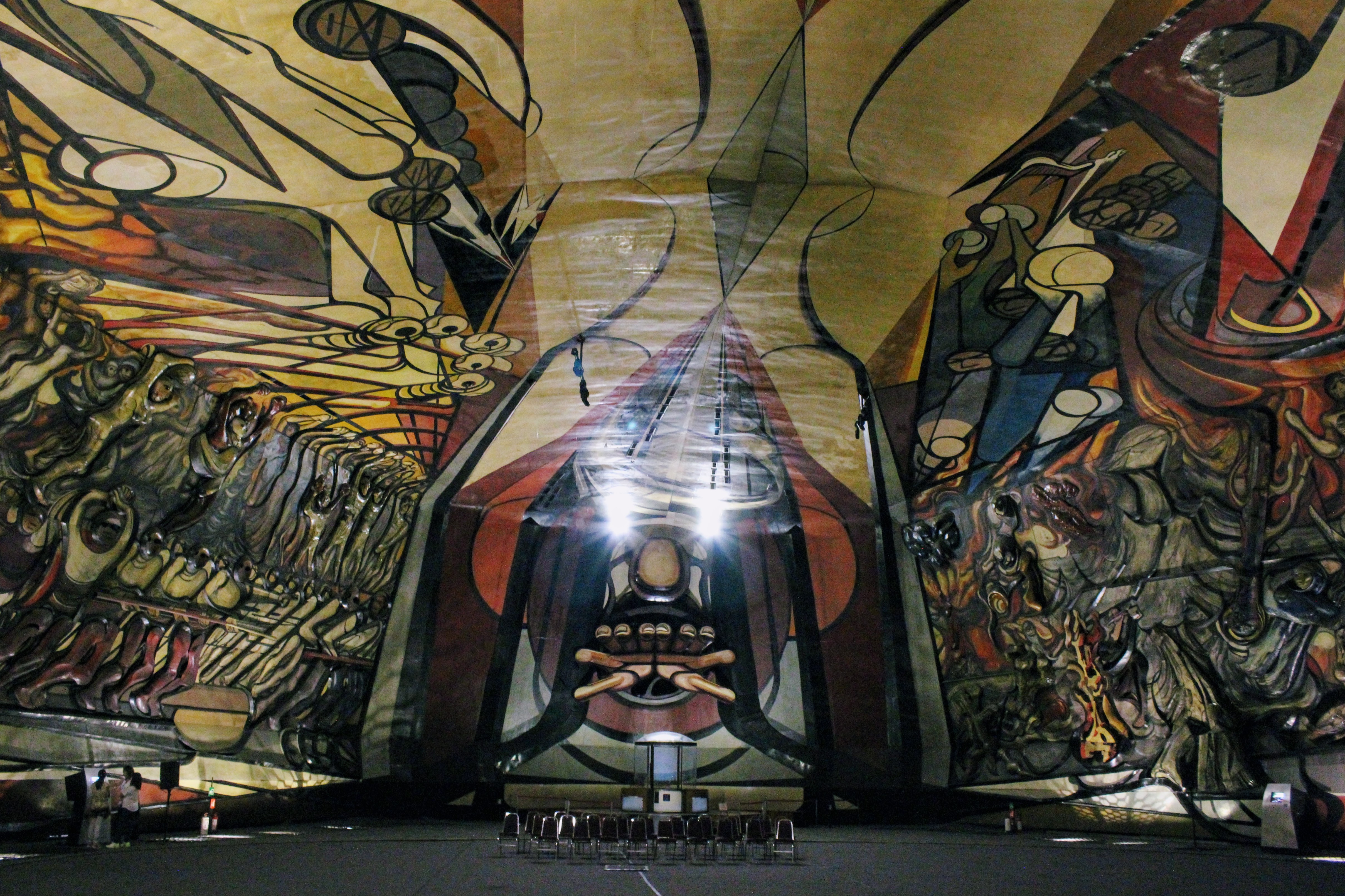 The March of Humanity is a grand metaphor about the struggles of men and women throughout history and the search for a better society for all. 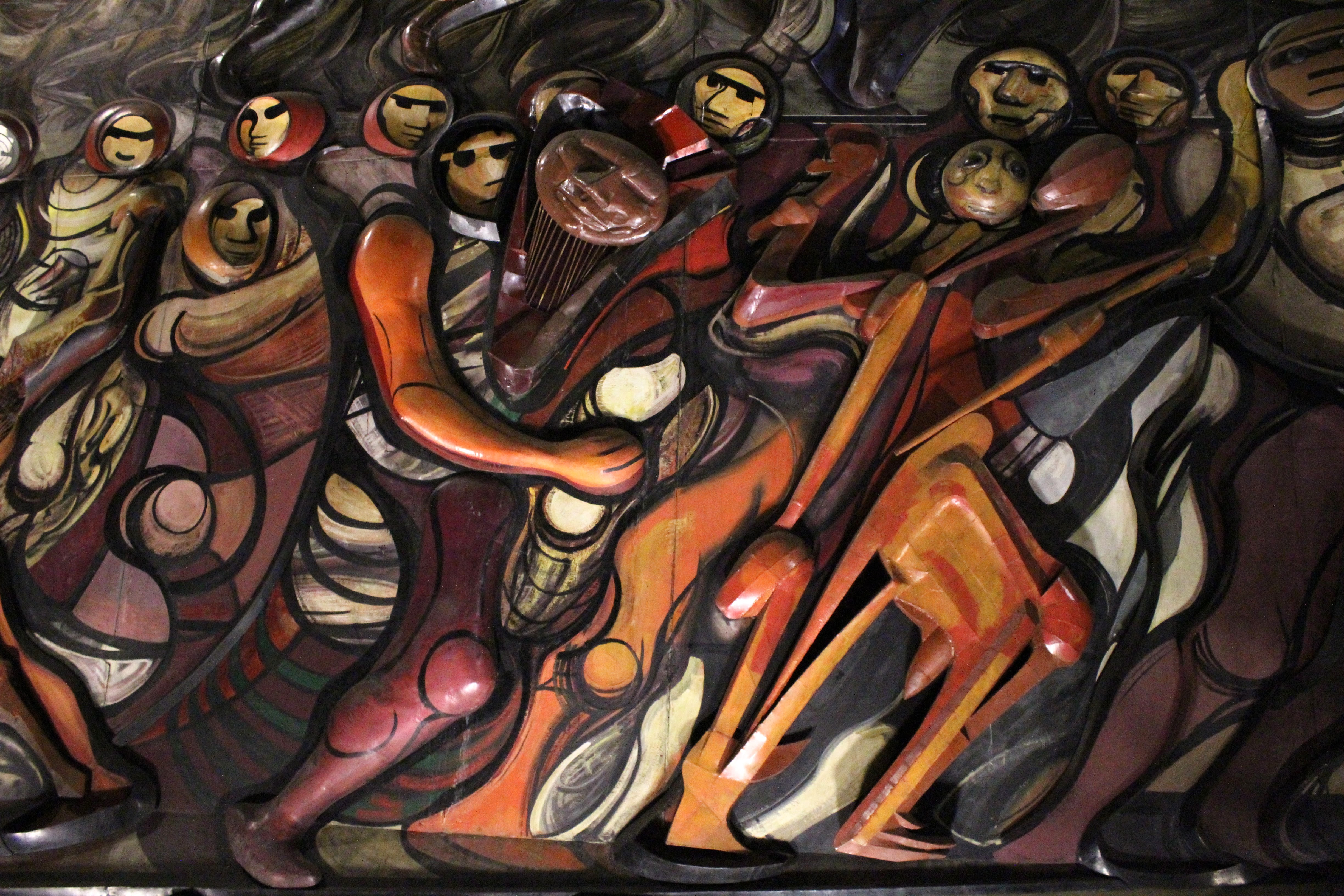 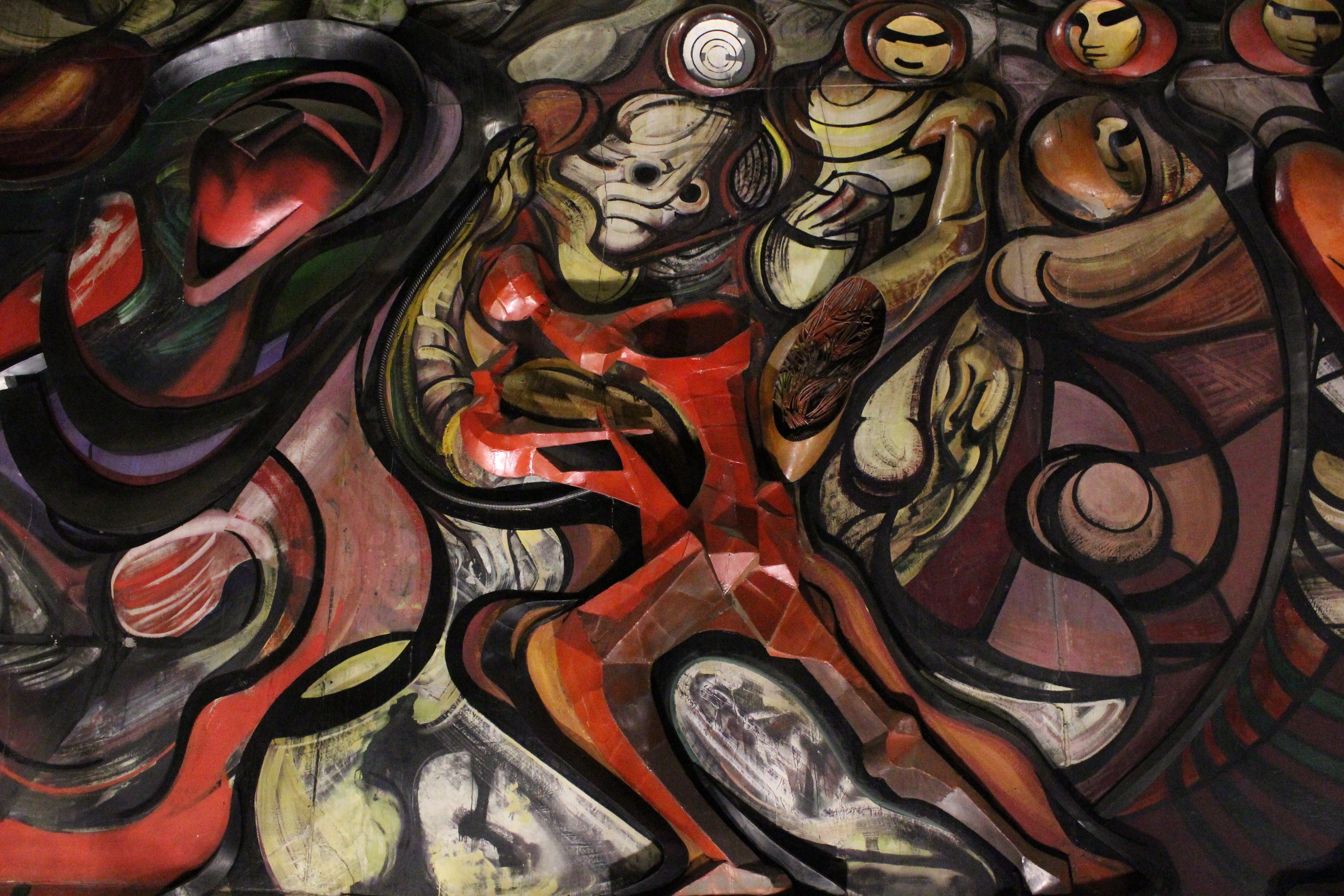 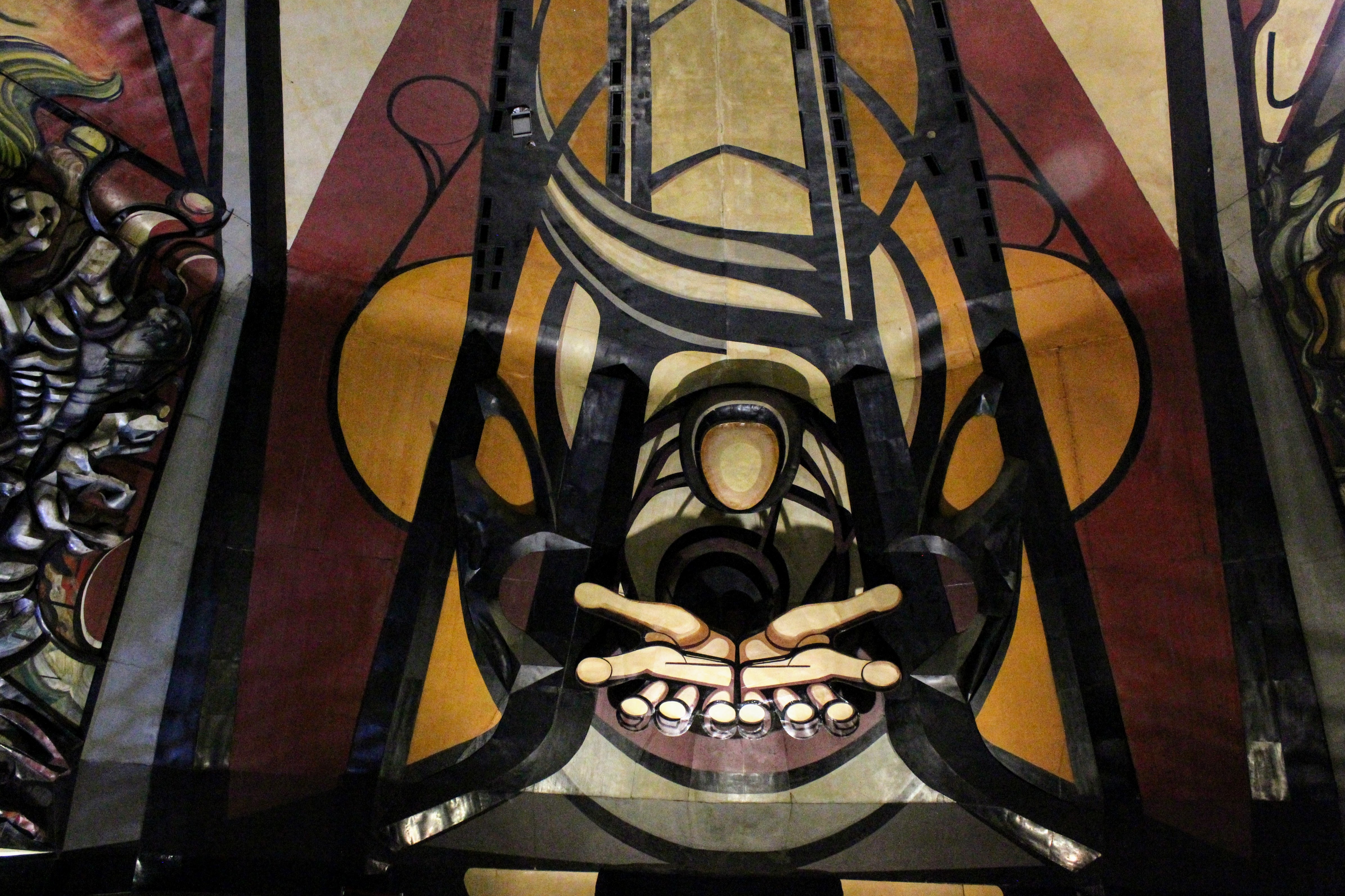 When the lights go out, and the stage starts rotating, you realize you are in for a ride. Yes, of course a 70’s project can’t do without a light and sound show. But the initial skepticism passes away quickly. After all, we are the stars of this show. We know too well what the red stands for, what the sculls stand for. The march ends with a lump in your throat.

Still under the spell of what you just experienced, you get to the nearby Burger King. And you discover that the hands reaching out to you weren’t bringing peace or justice. They were offering burger with a coke. So typically human. 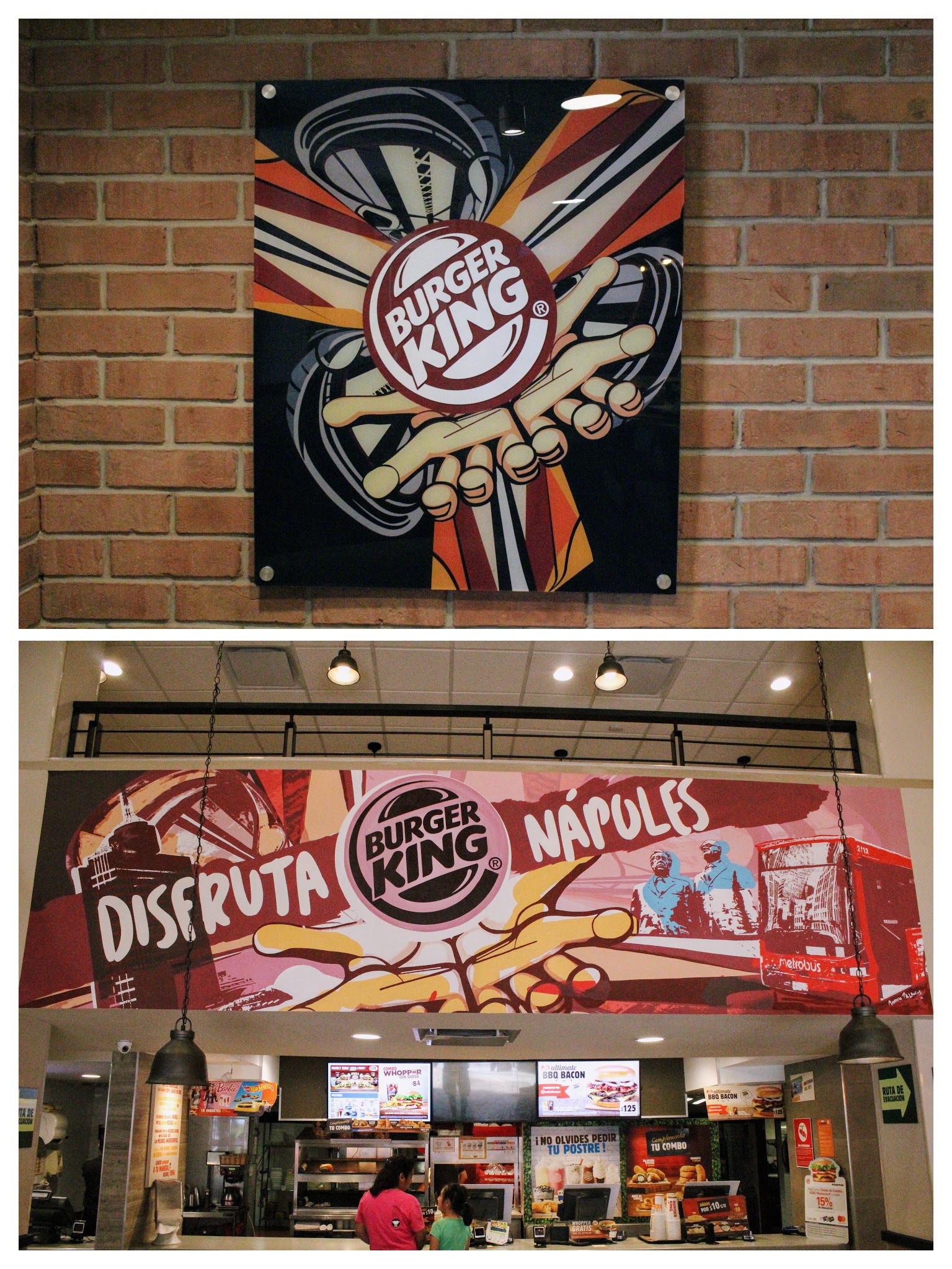 If the goal of art is to stir emotions, then Mexican muralism reaches this goal triumphantly. I’ve never been so moved by visual art as I was during those months in Mexico. You begin with an awe of the work’s scope, get swept by its political narrative, and finally give in to its emotional impact. If you need another reason to stay longer in Mexico City, I can’t think of a better one.