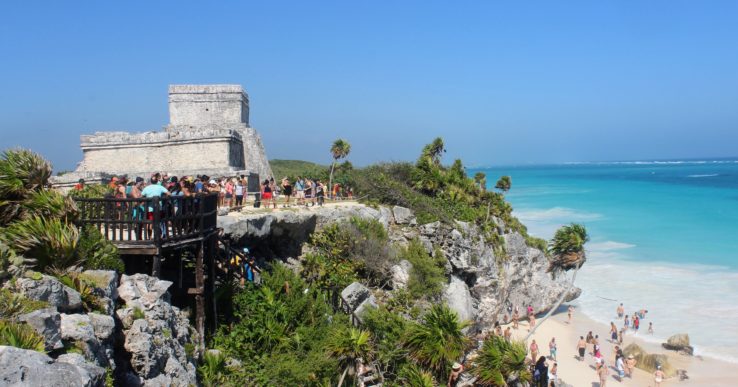 White sands and turquoise waters of the Caribbean, ancient Maya city of Tulum, underground rivers, and freshwater caves of Sac Actun. It’s all here, on the Caribbean coast of Yucatan, a result of an astonishing collaboration of circumstances, nature, and pre-hispanic Maya culture.

After a day on the road, we spent the morning relaxing on the El Paraiso beach. The sea was warm but windy. Looking at it was more than enough to enjoy it. 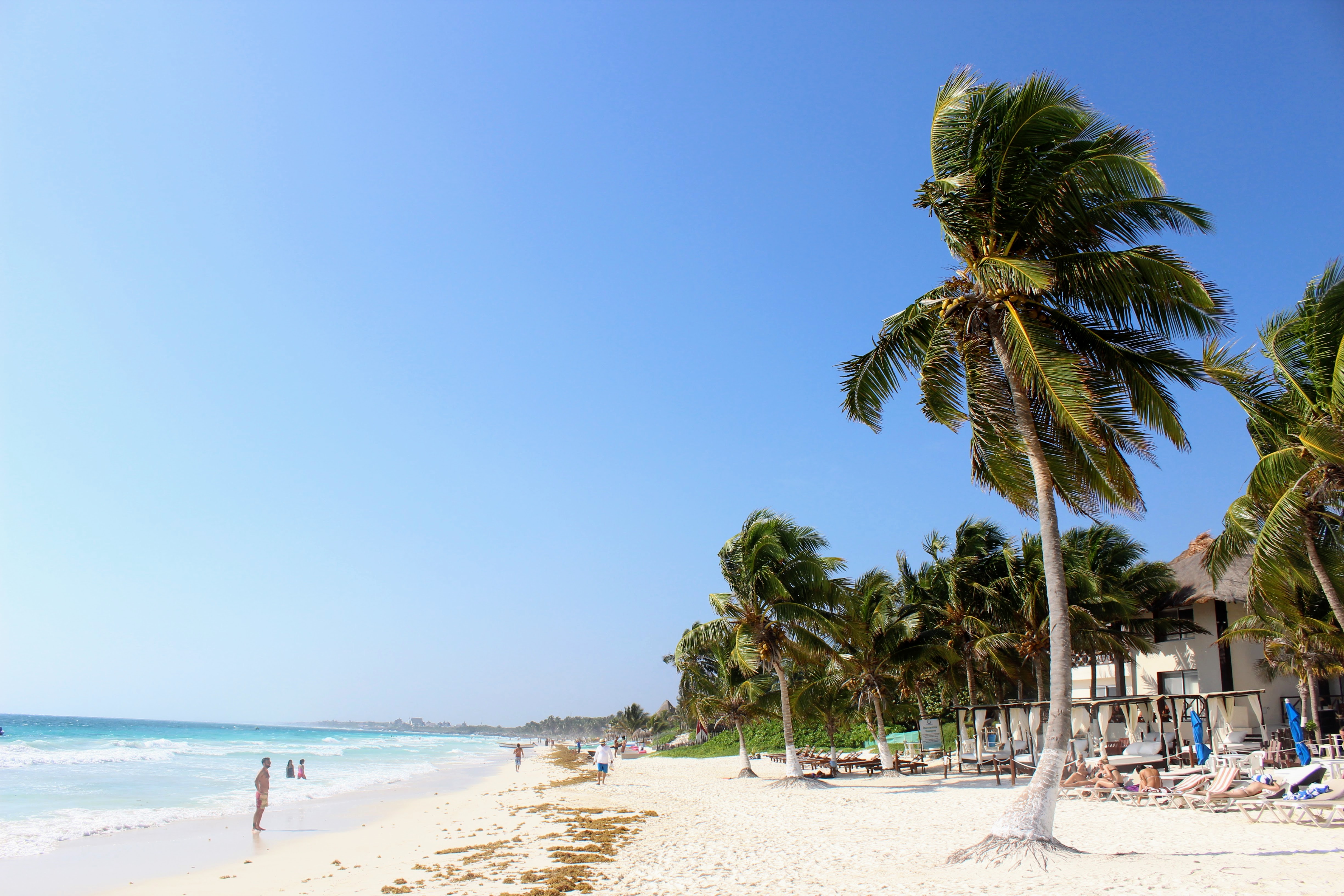 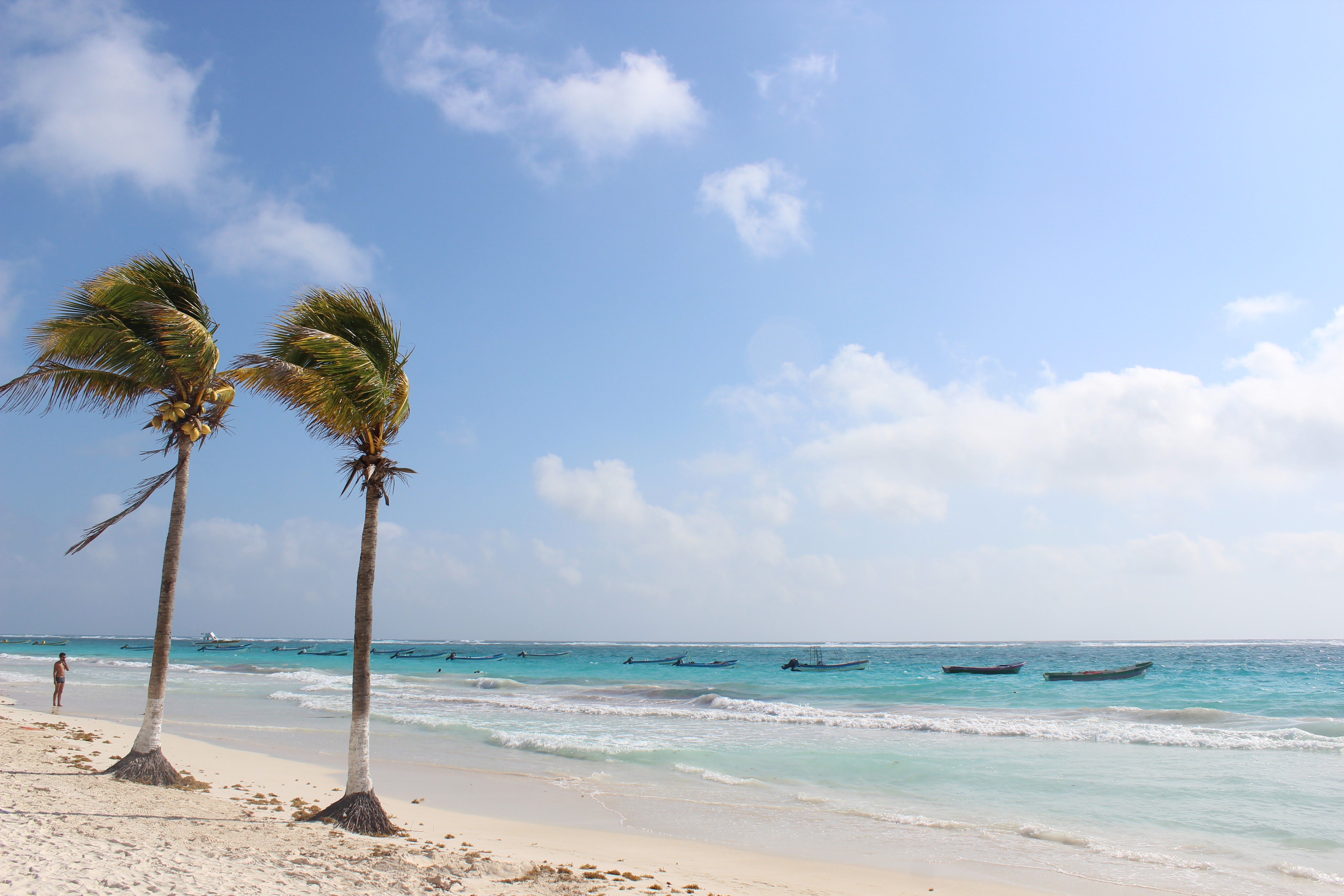 Our first encounter with the Caribbean sea didn’t disappoint. 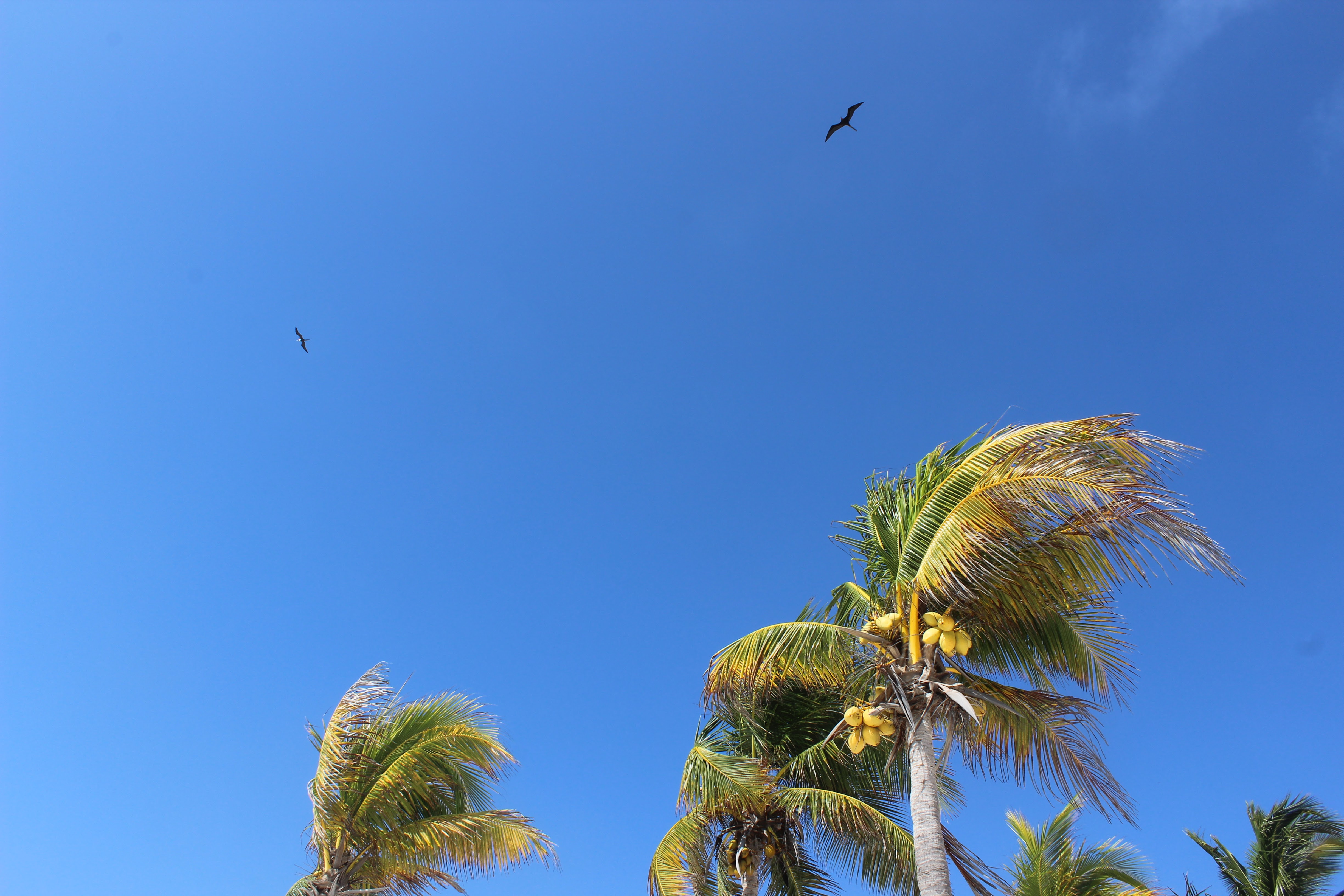 At noon, when the sun was scorching hot, we left the beach, and after a short drive arrived at the gate of the Tulum archaeological zone.

Spectacularly located on a cliff overlooking the turquoise waters of the Caribbean Sea, Tulum was a pre-Columbian Mayan walled city serving as a major port for the city of Cobá. 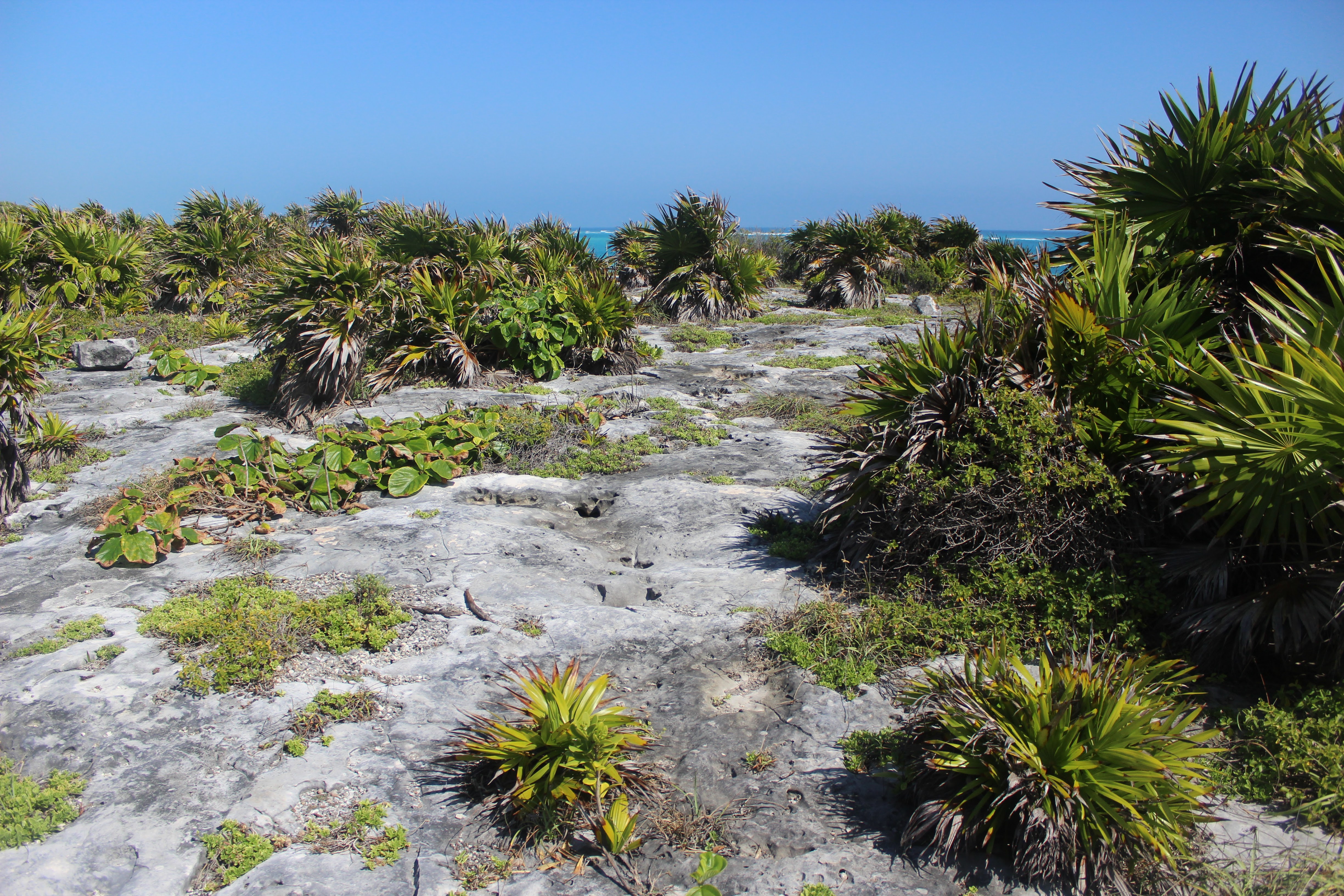 Tulum was one of the last cities built and inhabited by the Maya; it was at its height between the 13th and 15th centuries and managed to survive about 70 years after the Spanish began occupying Mexico. Old World diseases brought by the Spanish settlers appear to have resulted in very high fatalities, disrupting the society and eventually causing the city to be abandoned

The first building seen from afar is the Temple of the God of Wind, notable for its round base. Given the proclivity of hurricanes in the area, it had to be a pretty important deity. 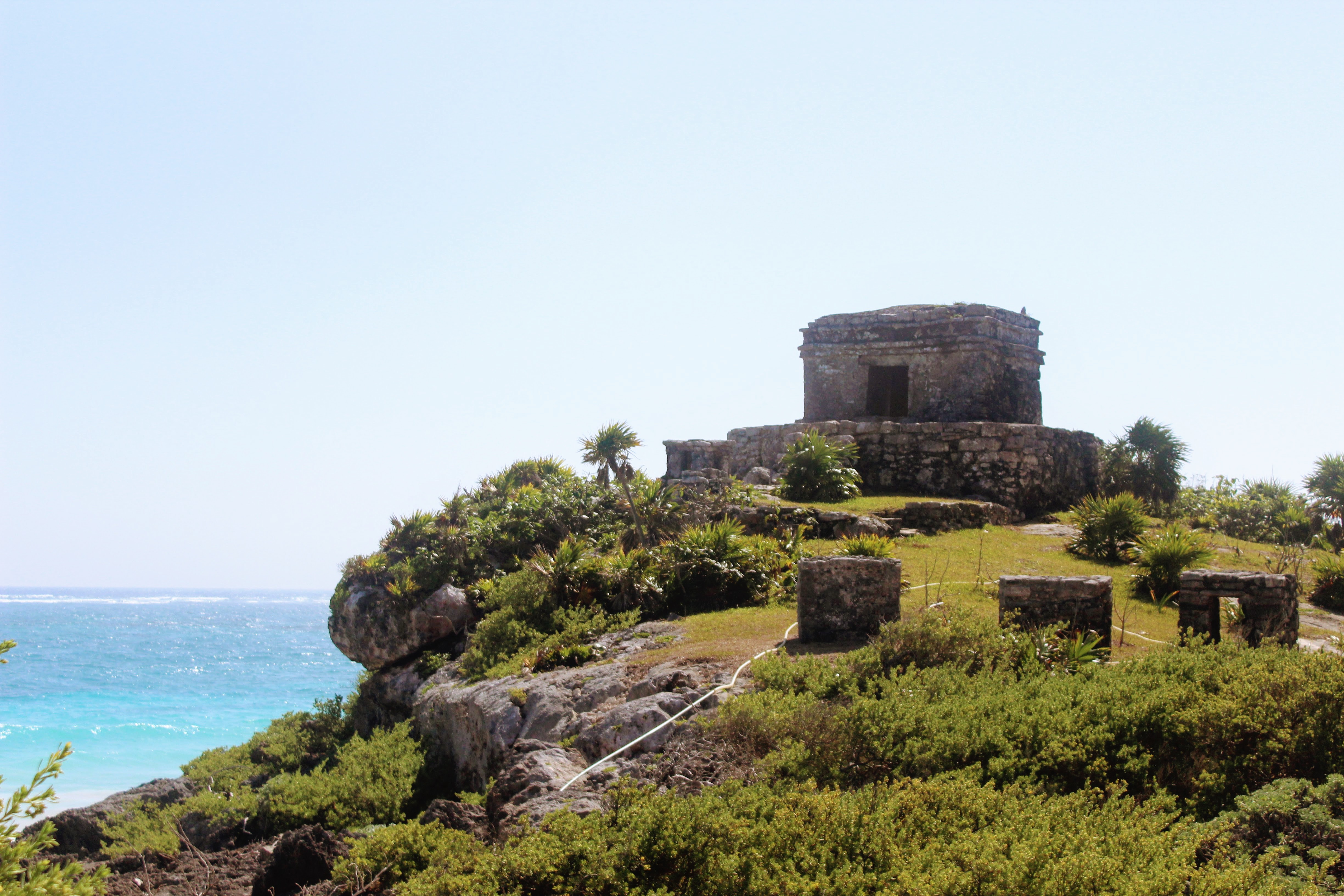 After turning from the coast inland, you are greeted by a field of gently-rolling hills. Free-standing columns and stone platforms dot the sun-baked landscape. 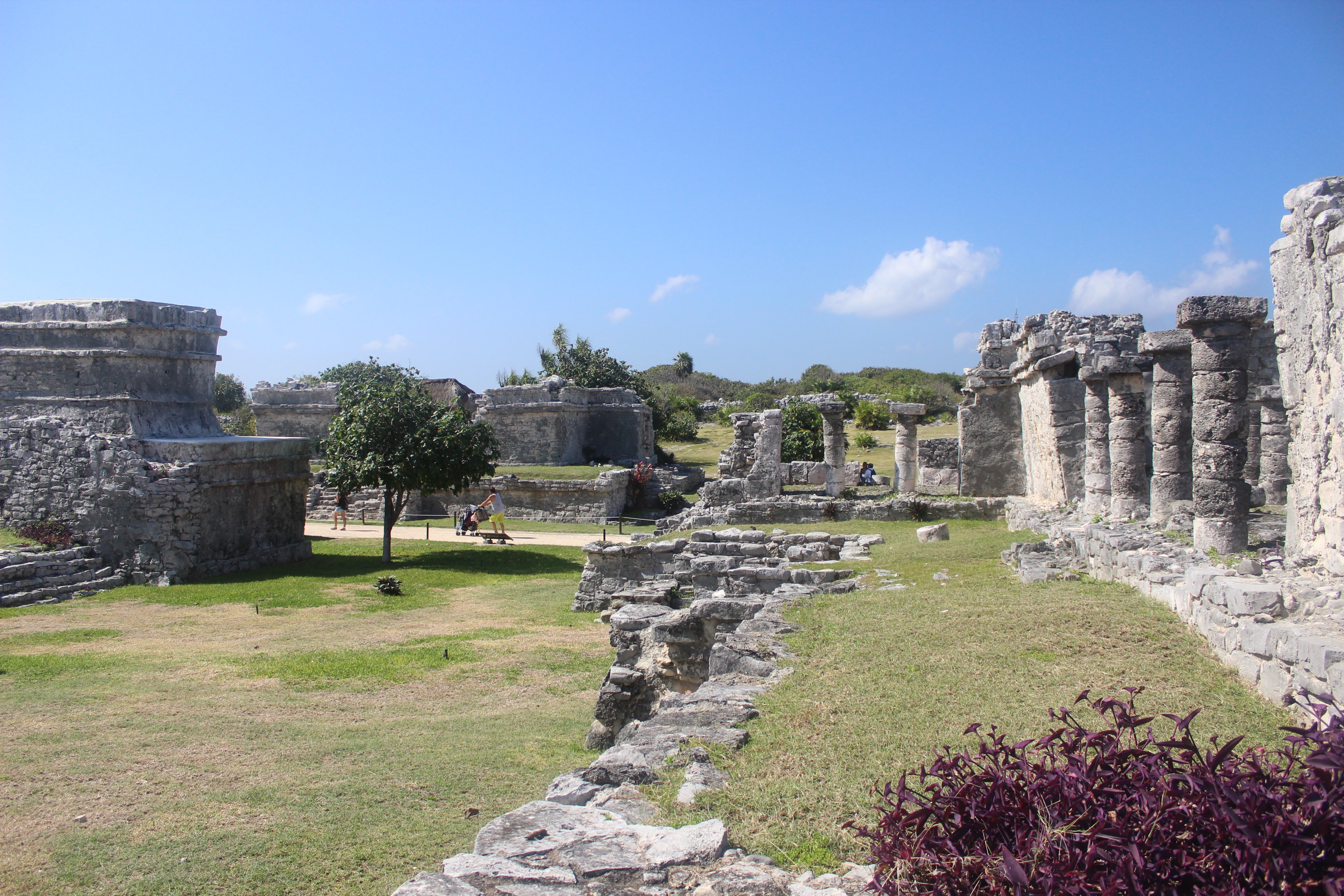 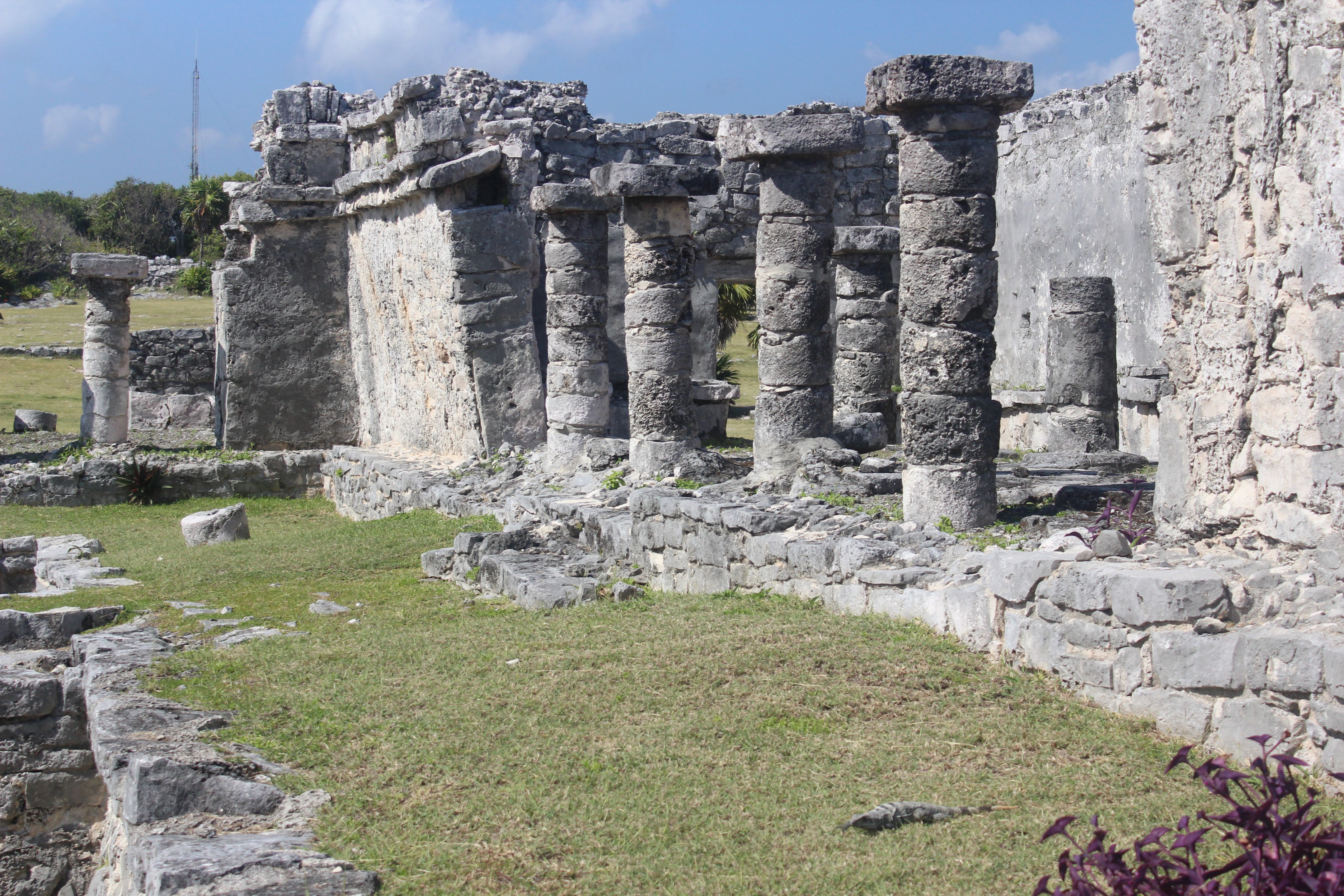 The Temple of the Frescoes was used as an observatory for tracking the movements of the sun. Niched figurines of the Maya “diving god” decorate the facade of the temple 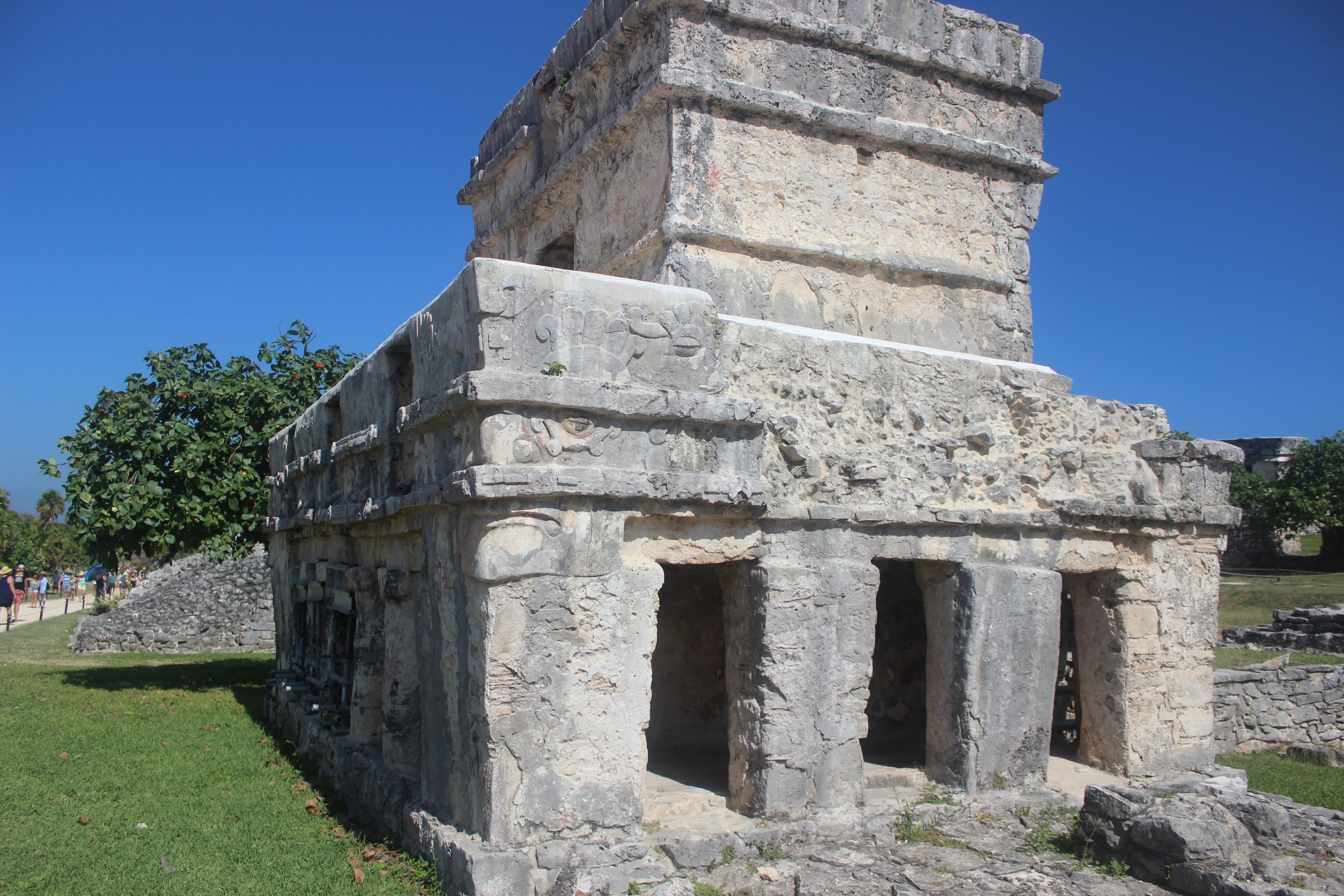 A scary number amount of large iguanas roam the site. By now I should have been accustomed to their presence. 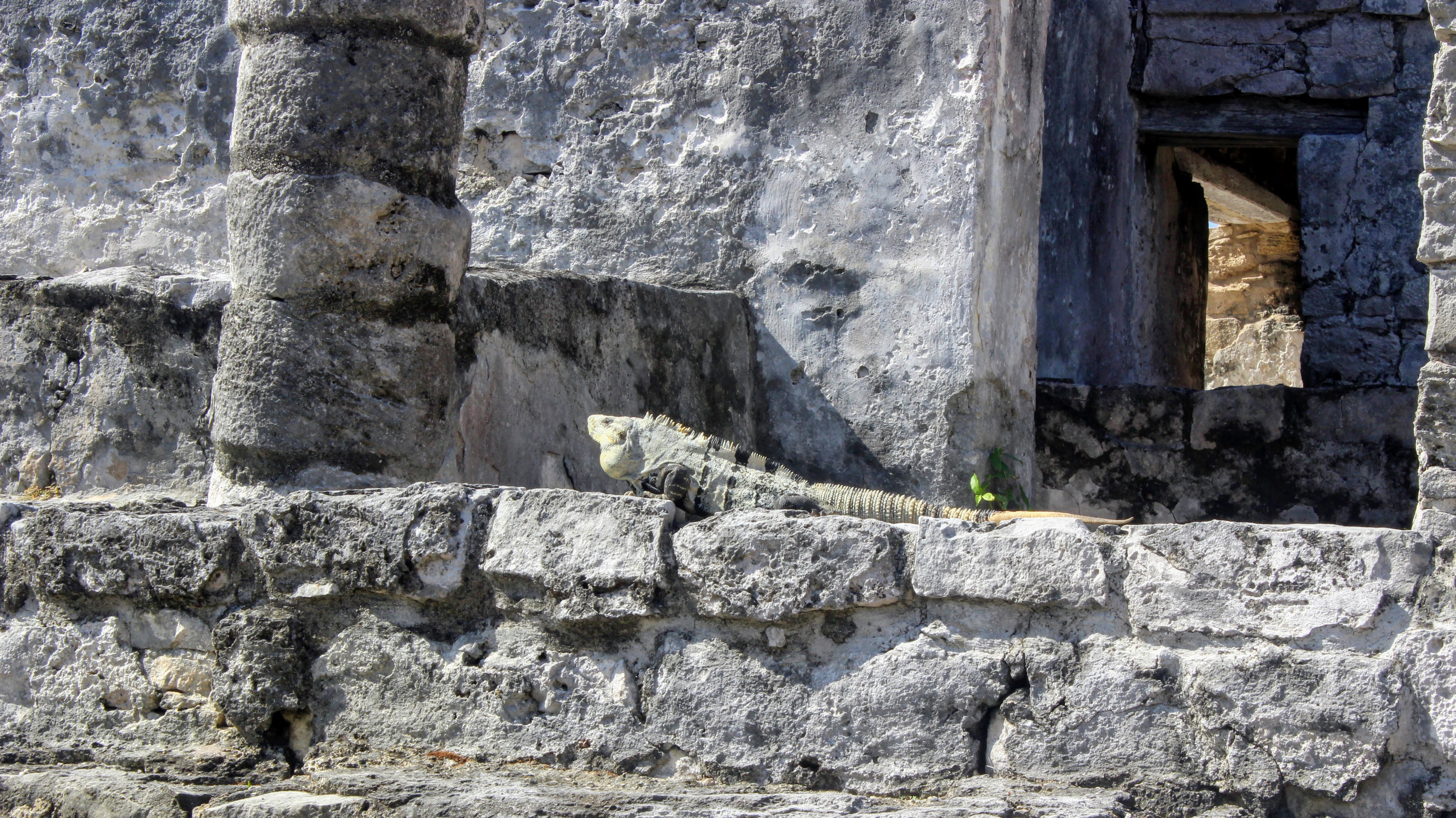 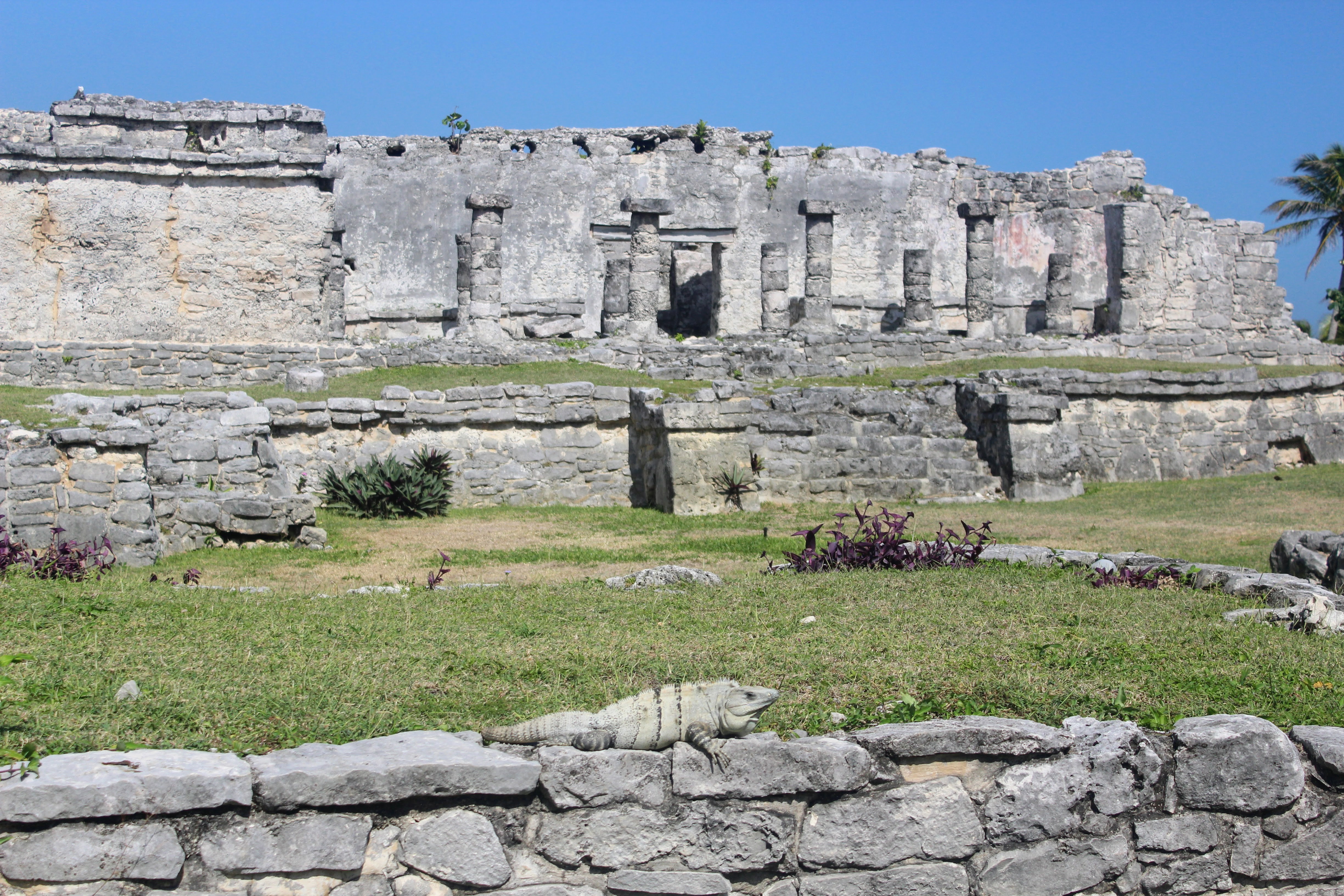 Pyramid El Castillo (The Castle) is the most prominent building in Tulum. A pyramid-shaped temple, it stands near the edge of the 15 meter cliffs and overlooks the Caribbean. The building could have served as a lighthouse for sailors arriving to Tulum port. 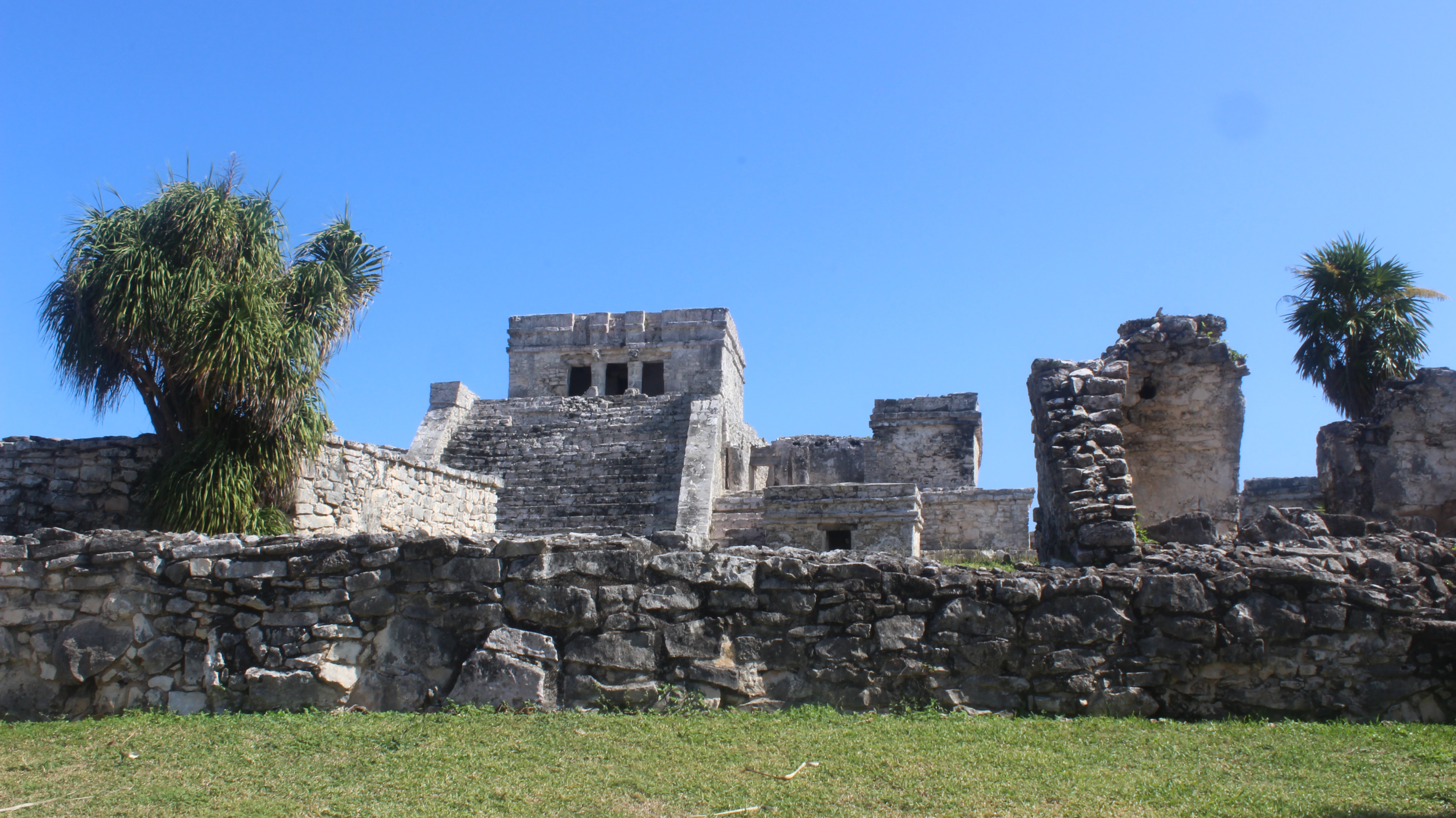 It was exciting to see how it looks today, compared to how it looked in 1839, when Frederick Catherwood made his famous sketches of the site.

Continuing with the path along the cliff, and then turning my head, I was awarded with a mind-blowing view. An ancient Mayan temple on the backdrop of turquoise waters, white sand and palms bending at the wind.

A staircase from the cliff leads to… a beach open for swimming. That’s right. Tulum has to be one of the very few archeological sites that encourage you to take a swimsuit with you.

Sweating, dehydrated but absolutely under the spell of this place, I reluctantly agreed to leave, rushed by Oxanna. While I was taking in the views, she was keeping busy a cranky 3-year-old.

After grabbing something to eat we rushed to Sac Actun. Half hour drive north from Tulum, it’s a fascinating underwater cave system situated along the Caribbean coast. Make sure you have a GPS with you – finding it isn’t easy. 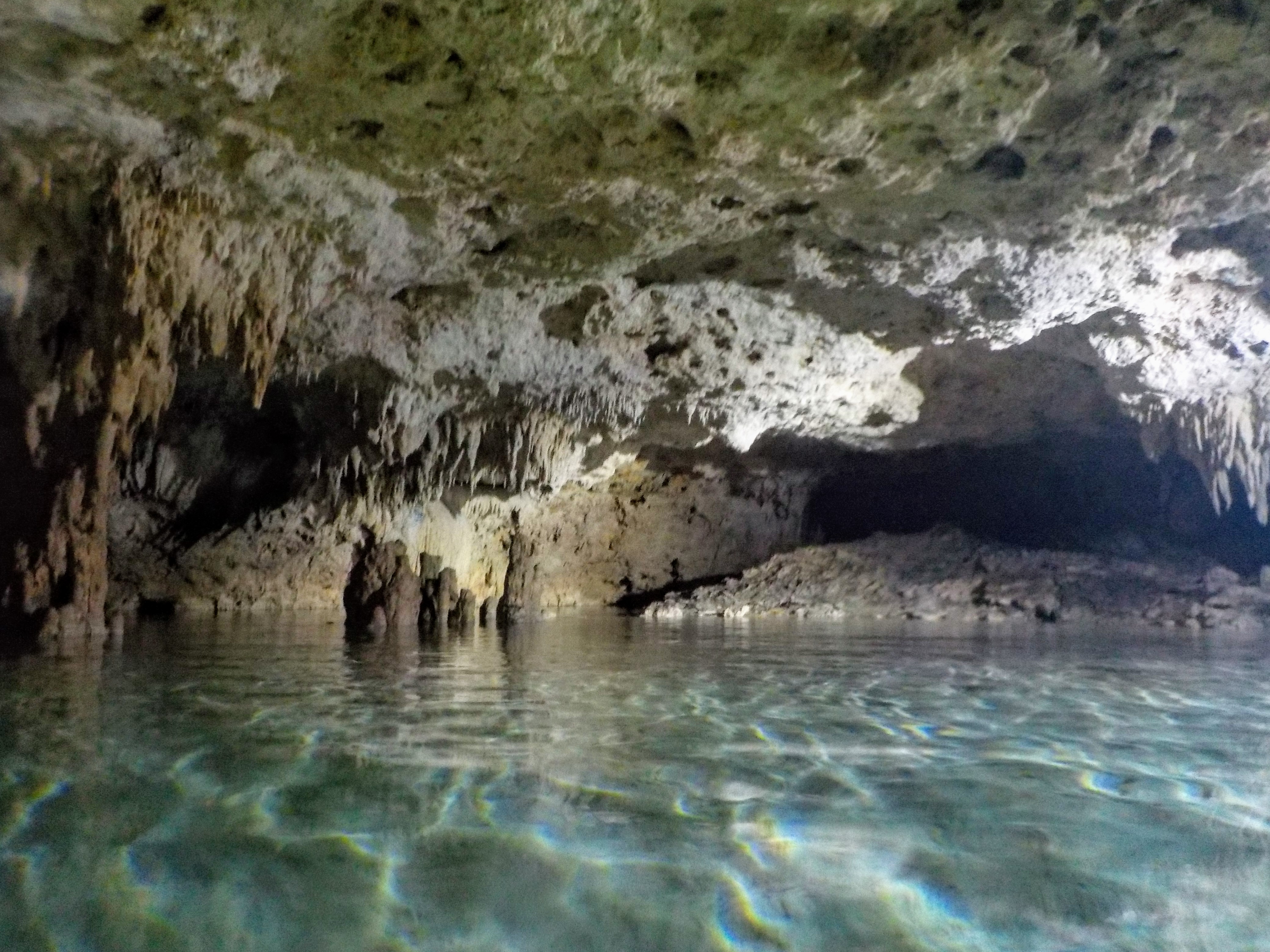 It’s around 300 kilometer in total length, making it one of the longest in the world. These vast underground systems are still not fully explored. Their geological origin seems to be related to the meteorite that hit Yucatan 66 million years ago, causing the extinction of the dinosaurs. 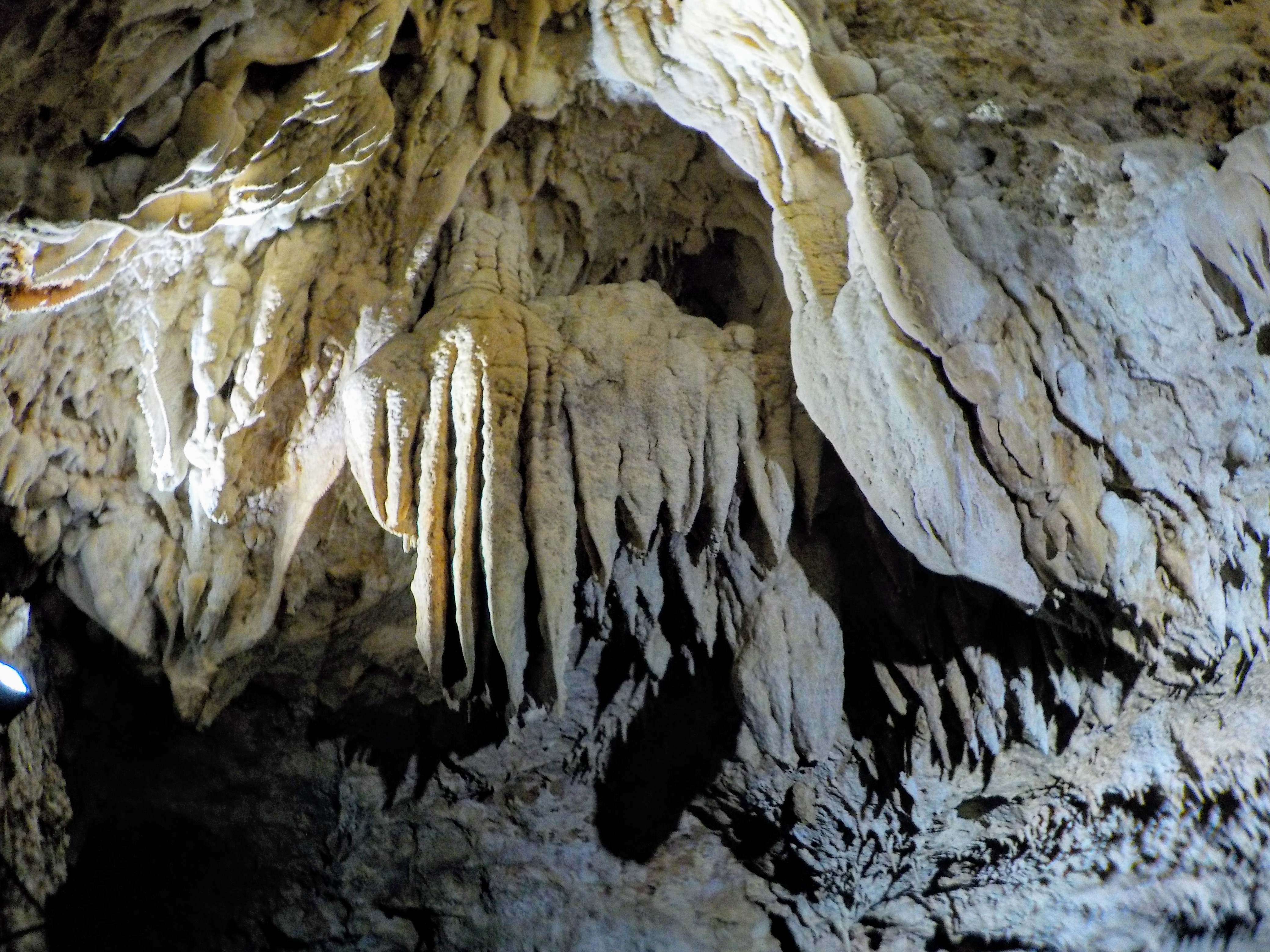 Yucatan Maya depended on such natural reservoirs for their drinking water.

During a 1-hour swim tour I got to see about 1 kilometer of its passages and halls. In some places the water is 8 meters deep, home to shrimps and small fish.

Astonishingly, some above-the-ground trees manage to make their way through the ceiling and put long roots in the water. 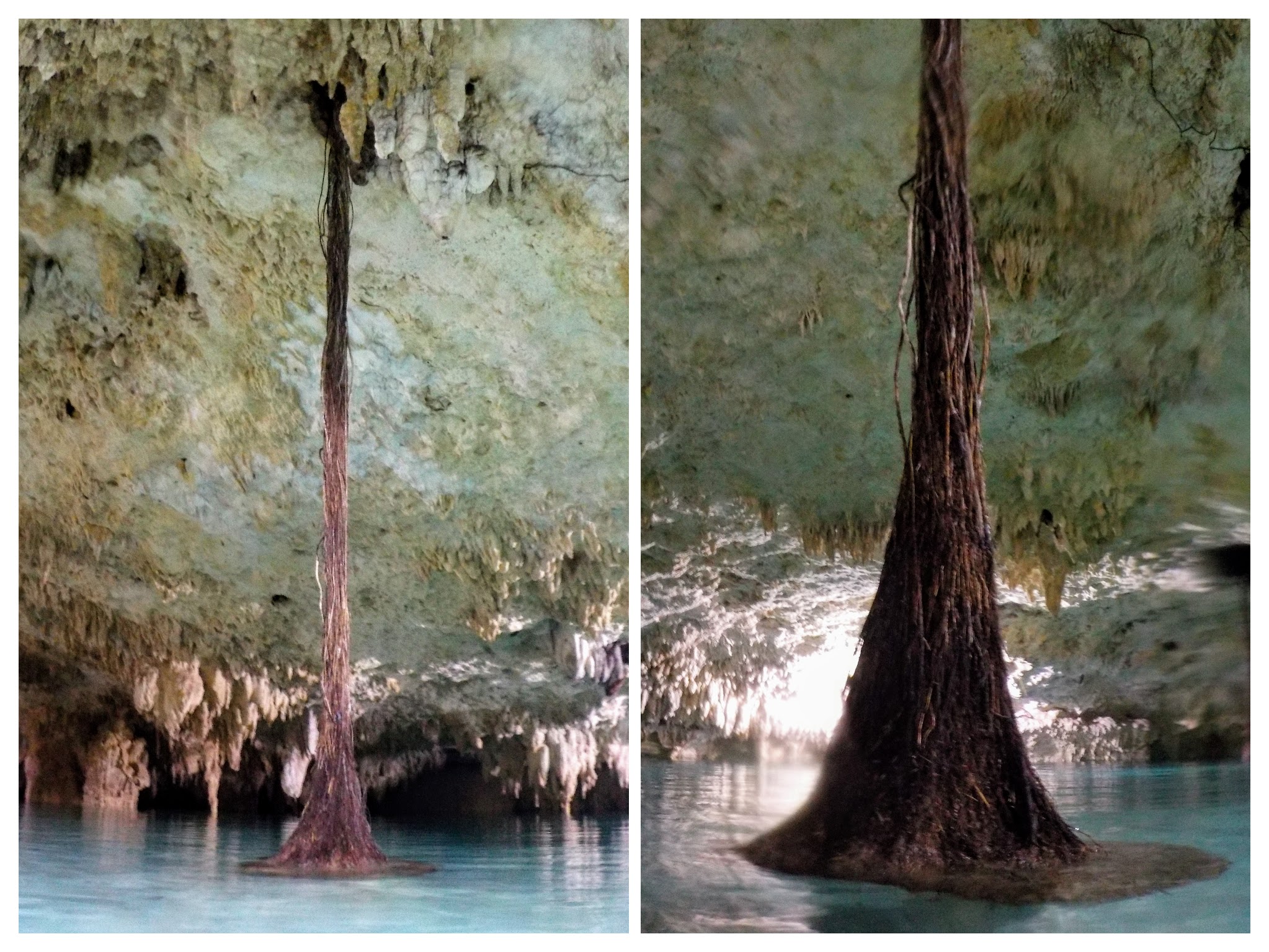 Back in the car, we headed to Akumal, famous for its population of green sea turtles. But when we reached it, the sun was already down, so instead we continued to our AirBnb apartment for the night. But how regretful could we be? That day had enough wonders to feed our imagination for months to come.