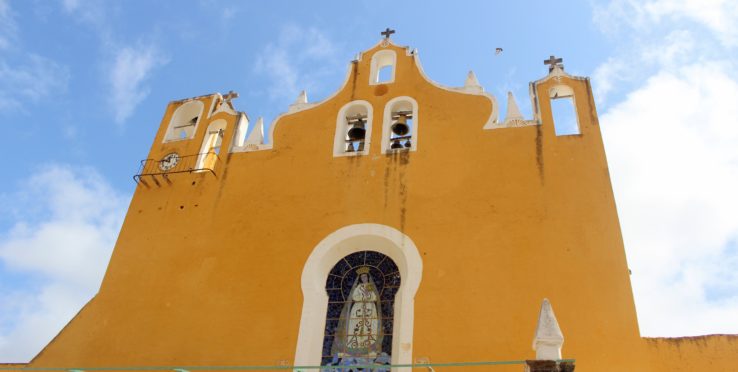 “I can show you a little bit of my Yucatan. Where do you stay?” This was the message I received from Luis Fernando, a young yucateco that replied me on Couchsurfing, where I was looking for locals to meet and befriend. A few days later we were speeding in his car outside of Merida on our way to Izamal, a pre-hispanic city, known today for its yellow buildings. Listening to Louise’s rapid conversation with Leyla, his female friend sitting in the front seat, I dozed off. When woken, we were in center of Izamal, right in front of the main arcade of its famous monastery . 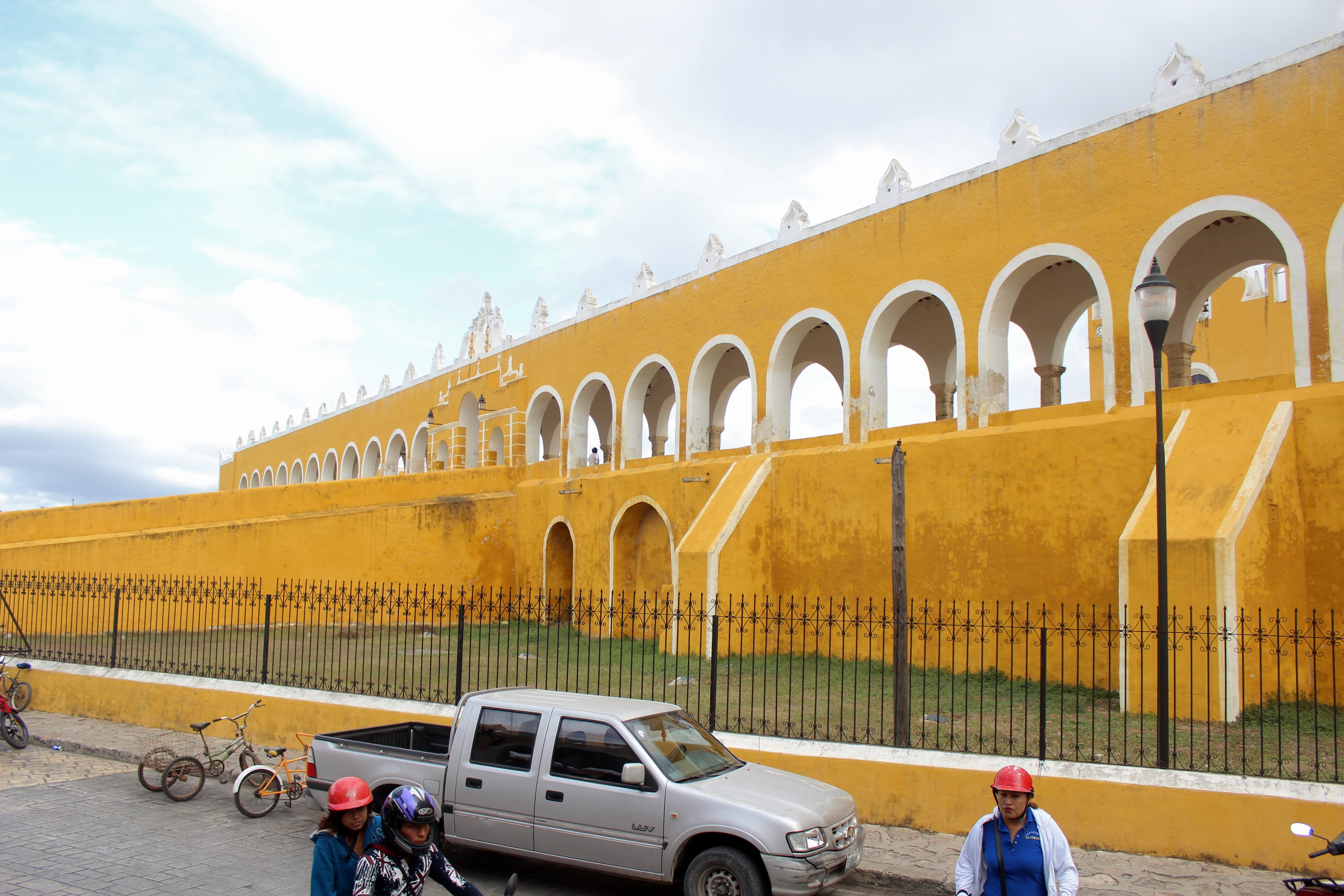 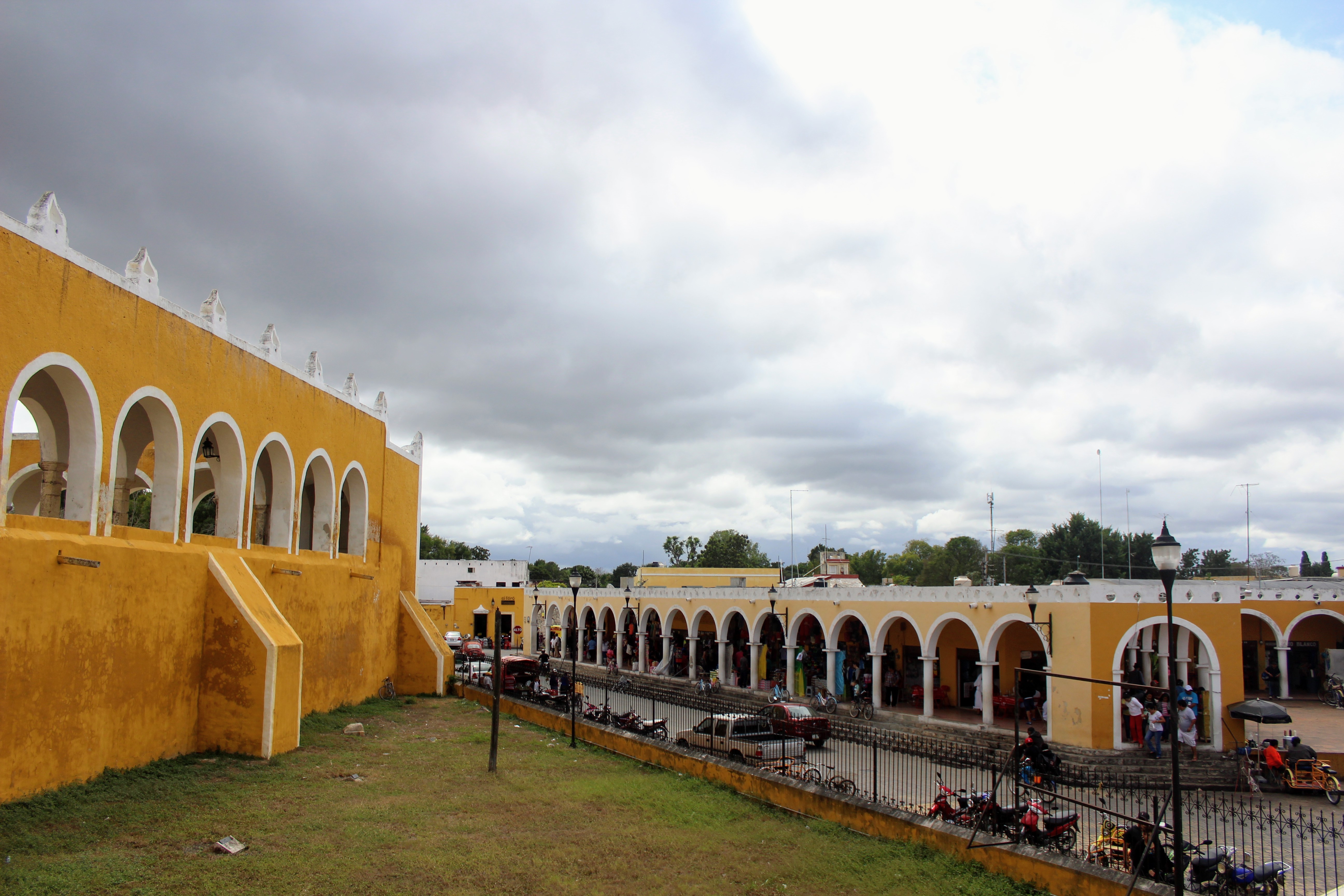 When the Spaniards conquered Izamal, they destroyed the major Maya temple, the Ppapp-Hol-Chac pyramid, and in 1533 began to build from its stones one of the first monasteries in the western hemisphere. Work on San Antonio de Padua monastery was finished in 1561. 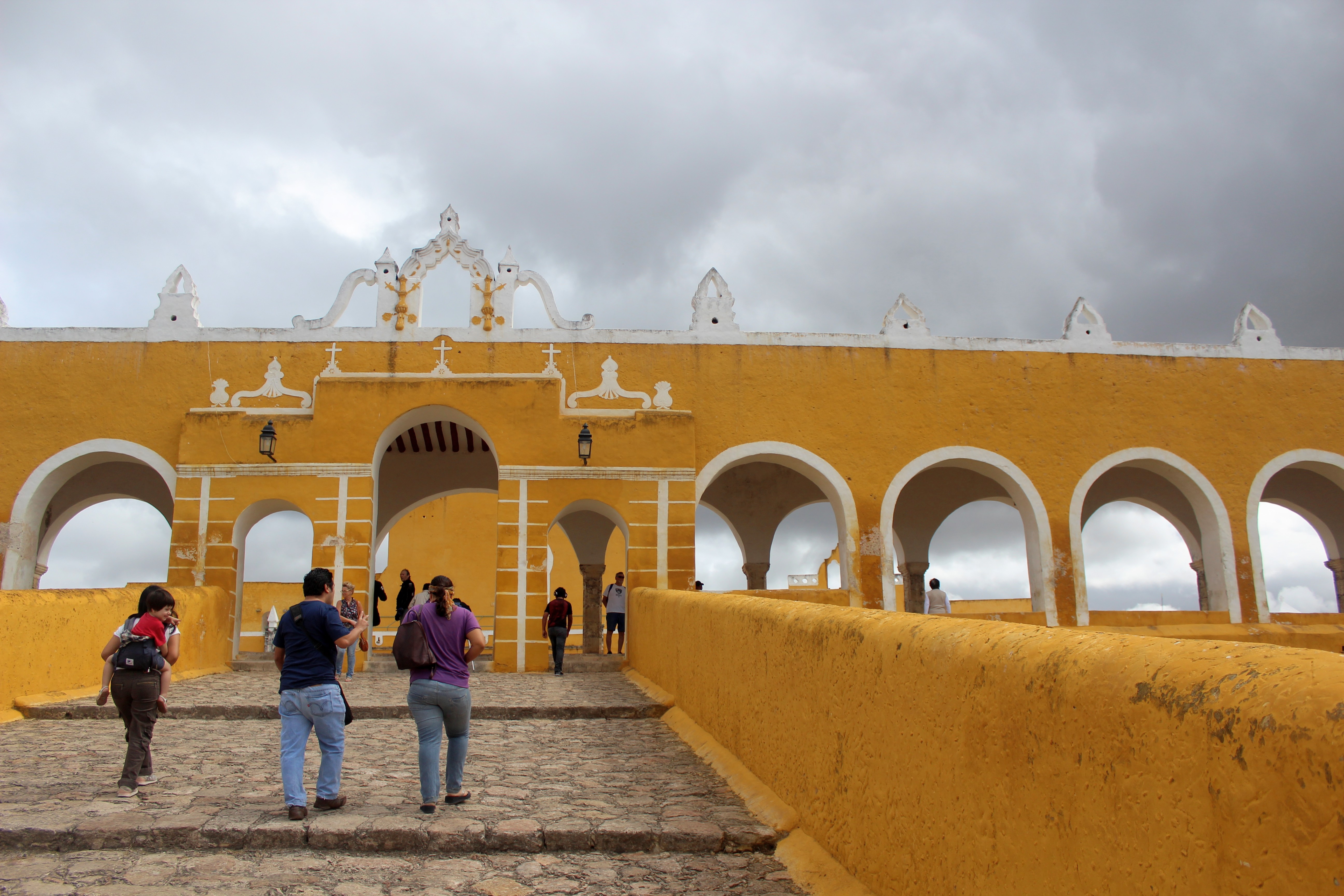 The monastery’s principal church is the Santuario de la Virgen de Izamal, whose image decorates the main window of the facade. 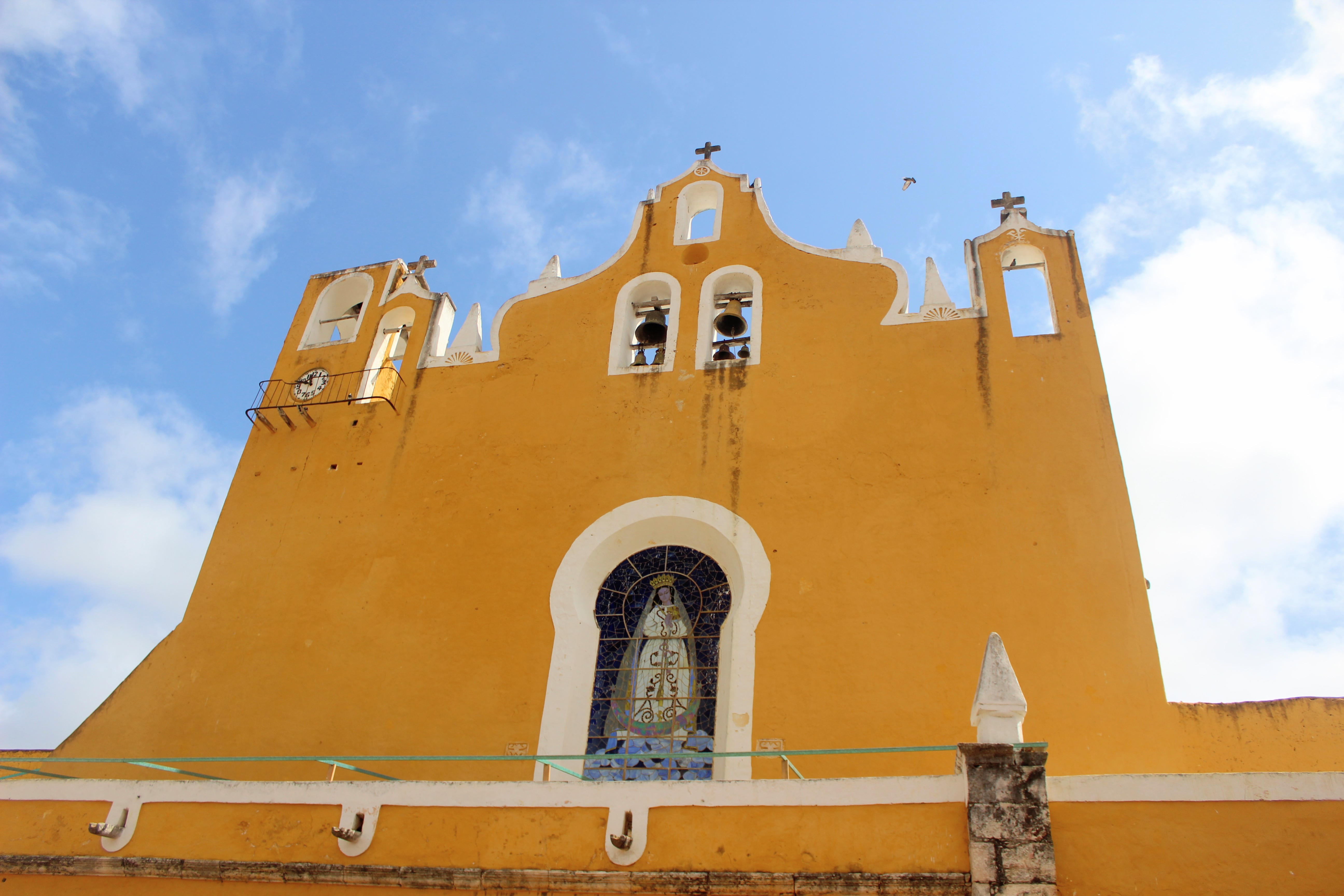 A statue of Pope John Paul II in front of the church commemorates his 1993 visit to the monastery. 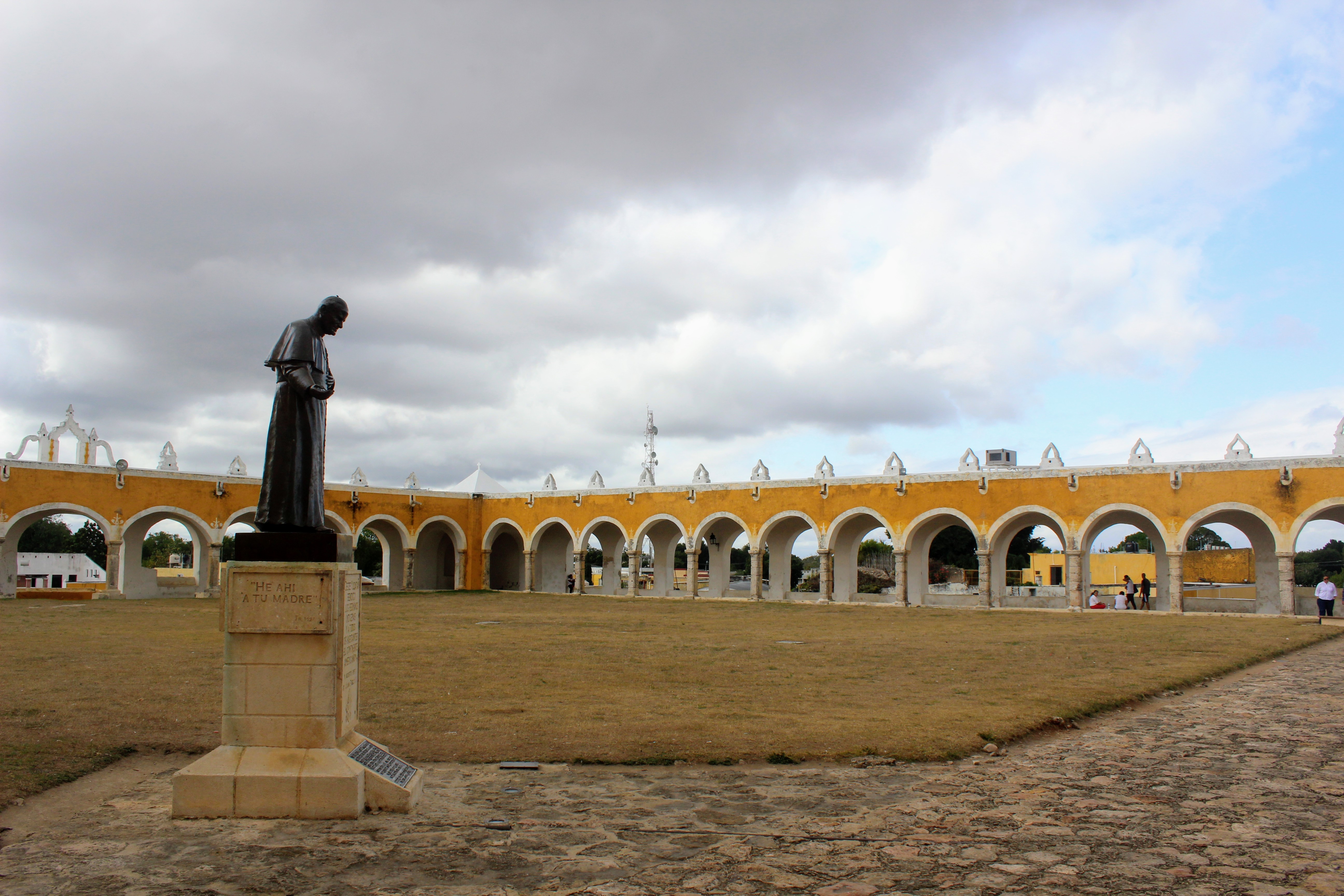 Inside the church, a figure of the virgin is in the center of the golden wall behind the altar. 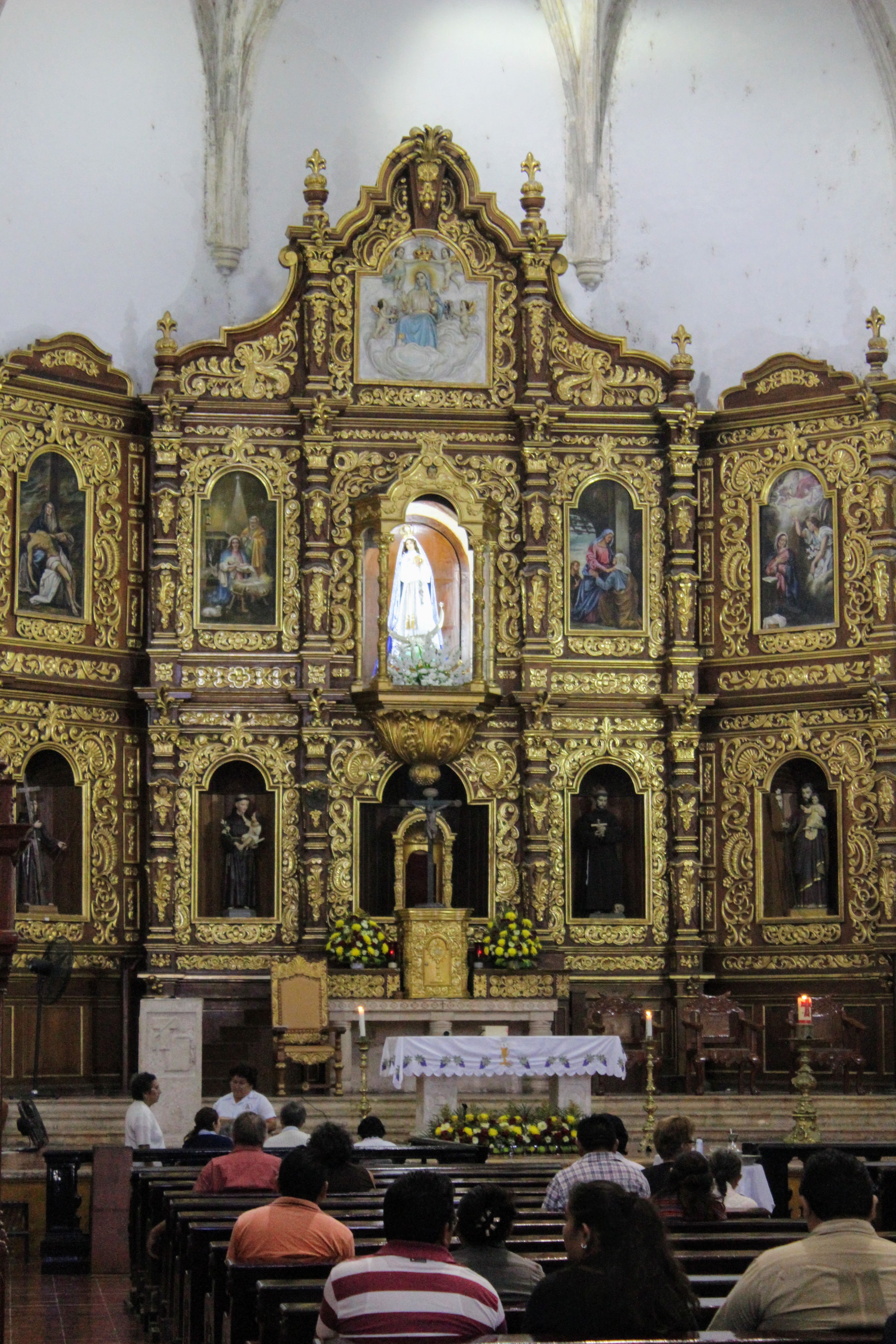 An ethnic Maya pastor was leading the Sunday service.

On the second floor, behind the main hall, there is a small museum dedicated to the Virgin of Izamal and the visit of Pope John Paul II. 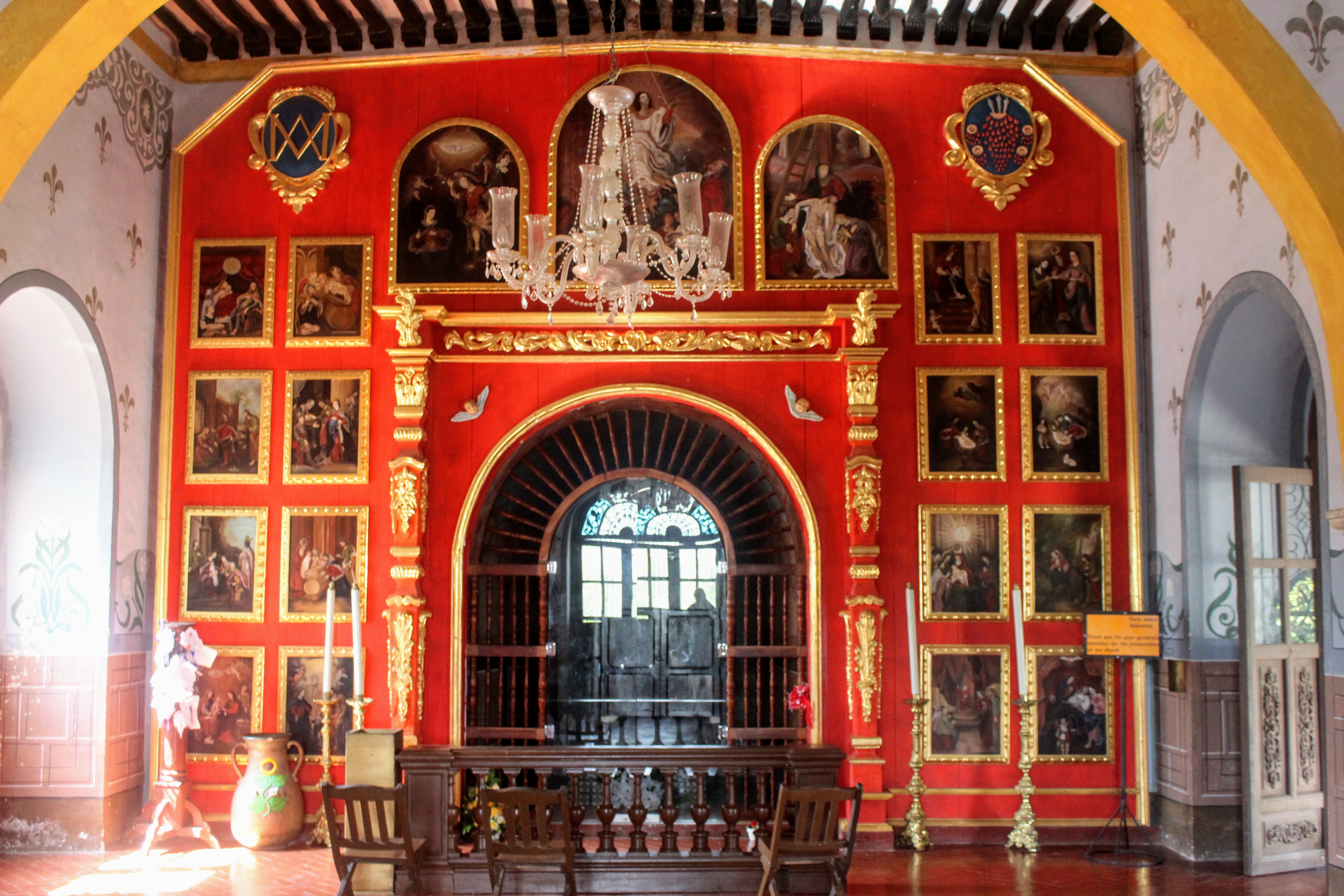 Yellow bikes, carts and booths on the streets complement yellow walls. Why yellow? Turns out, after pope’s visit locals painted their pride around the village, covering the buildings with yellow paint. 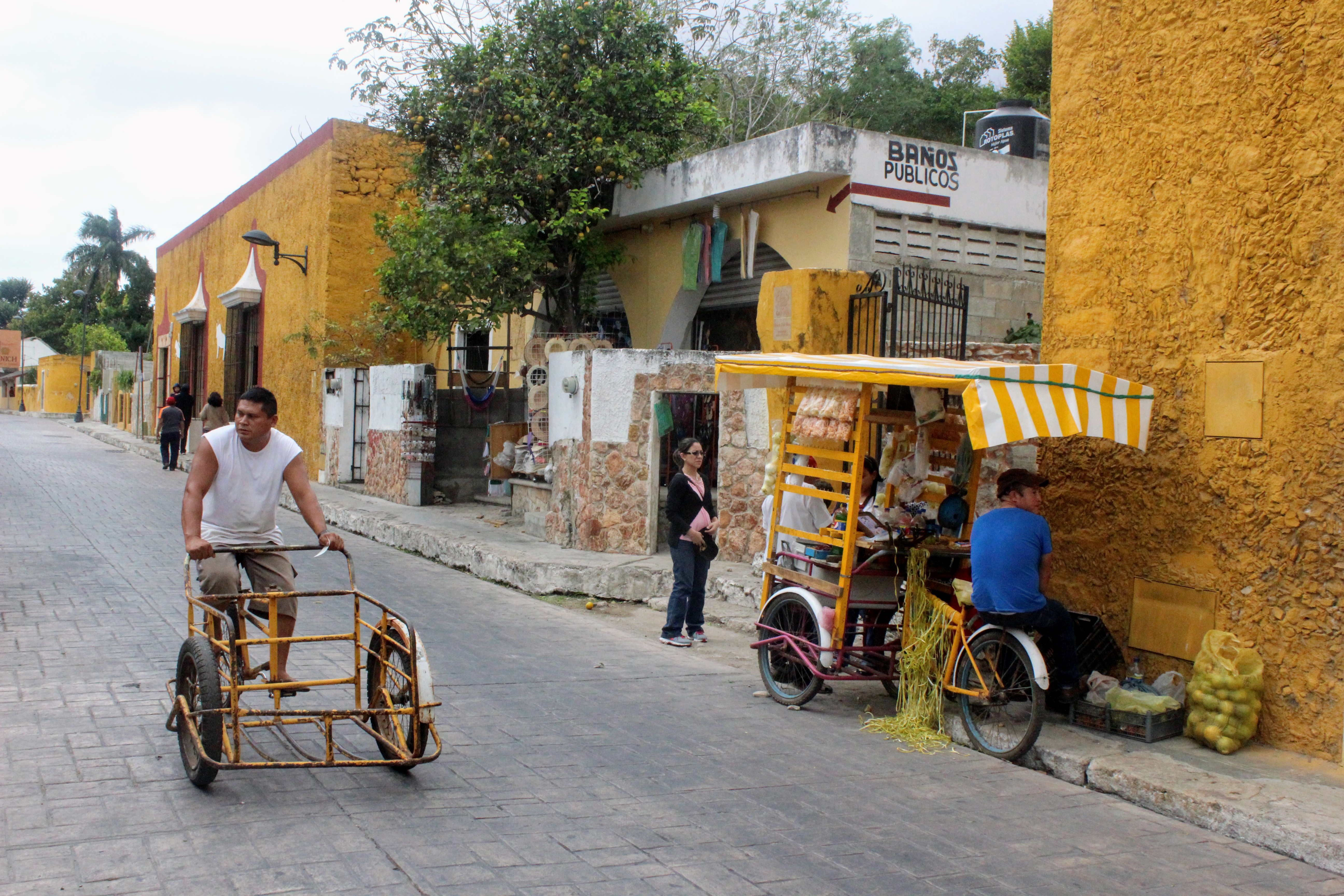 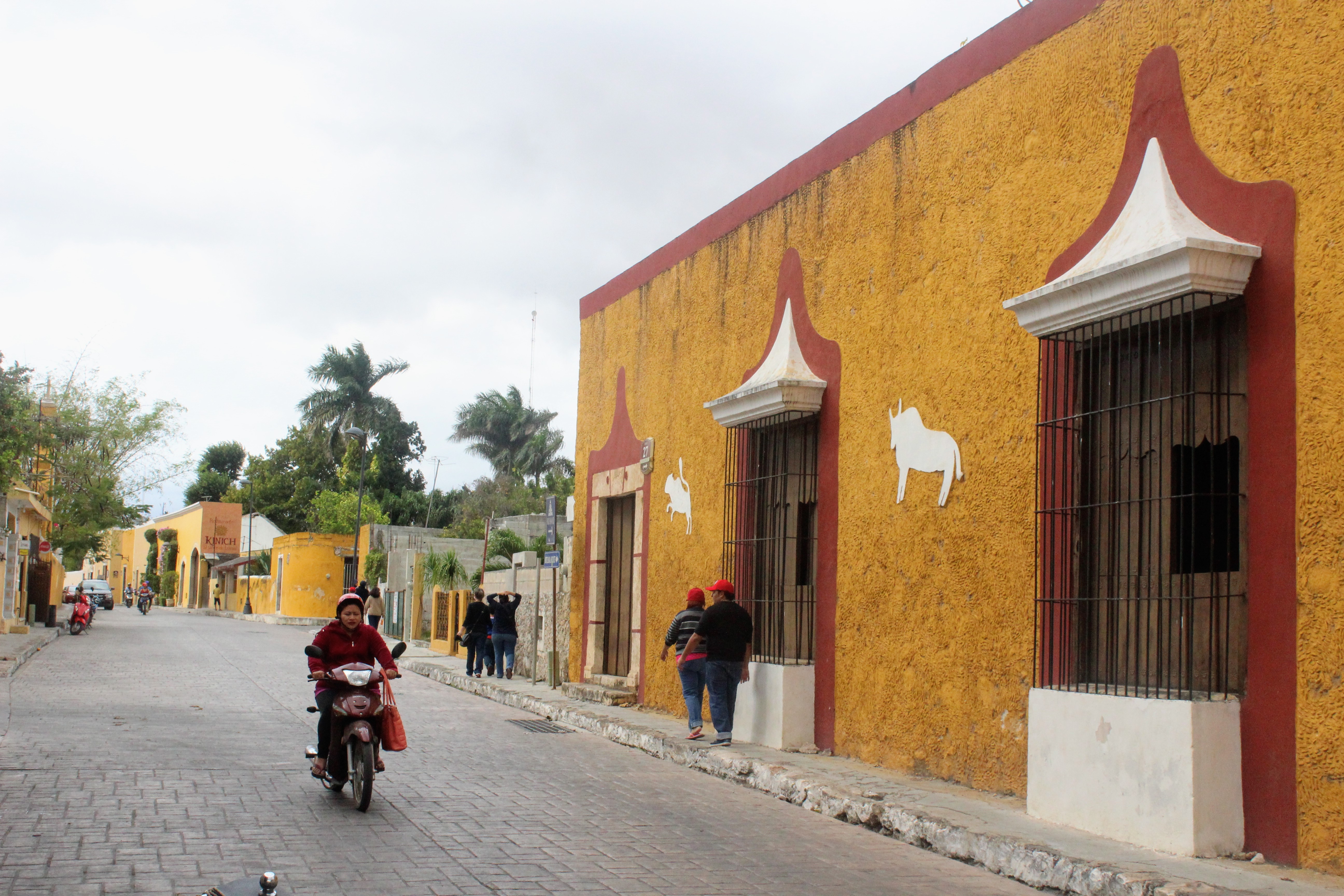 Not far from the monastery stands the pyramid of Kinich Kak Moo, Maya’s god of sun. It’s far from its former glory, but still is an important place of pilgrimage for the yucatecos. 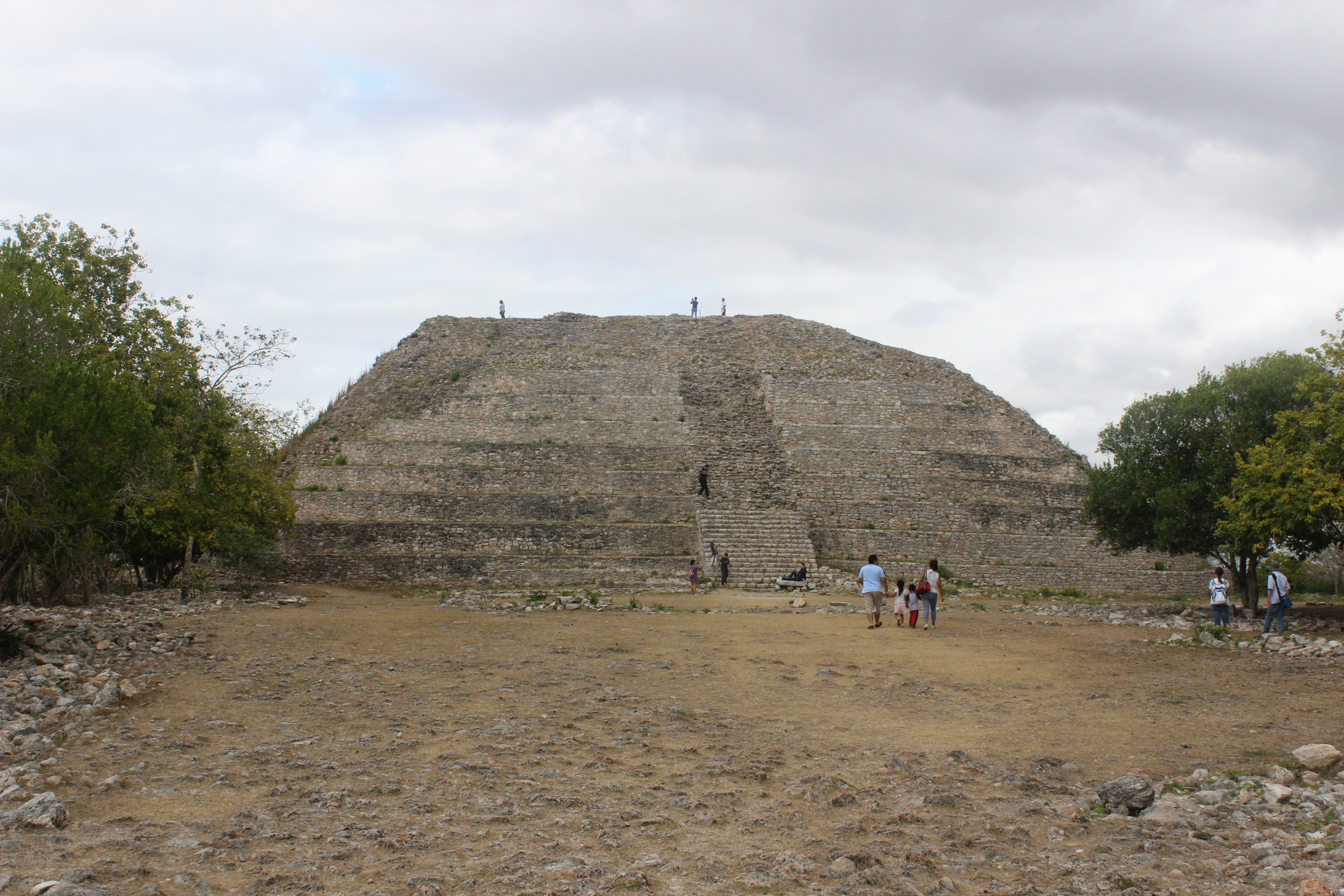 The city was founded during the Late Formative Period (750–200 BC) and was continuously occupied until the Spanish Conquest. Aside from this pyramid, and the one whose stones were used to build the monastery, there 3 other pre-hispanic structures in the city. 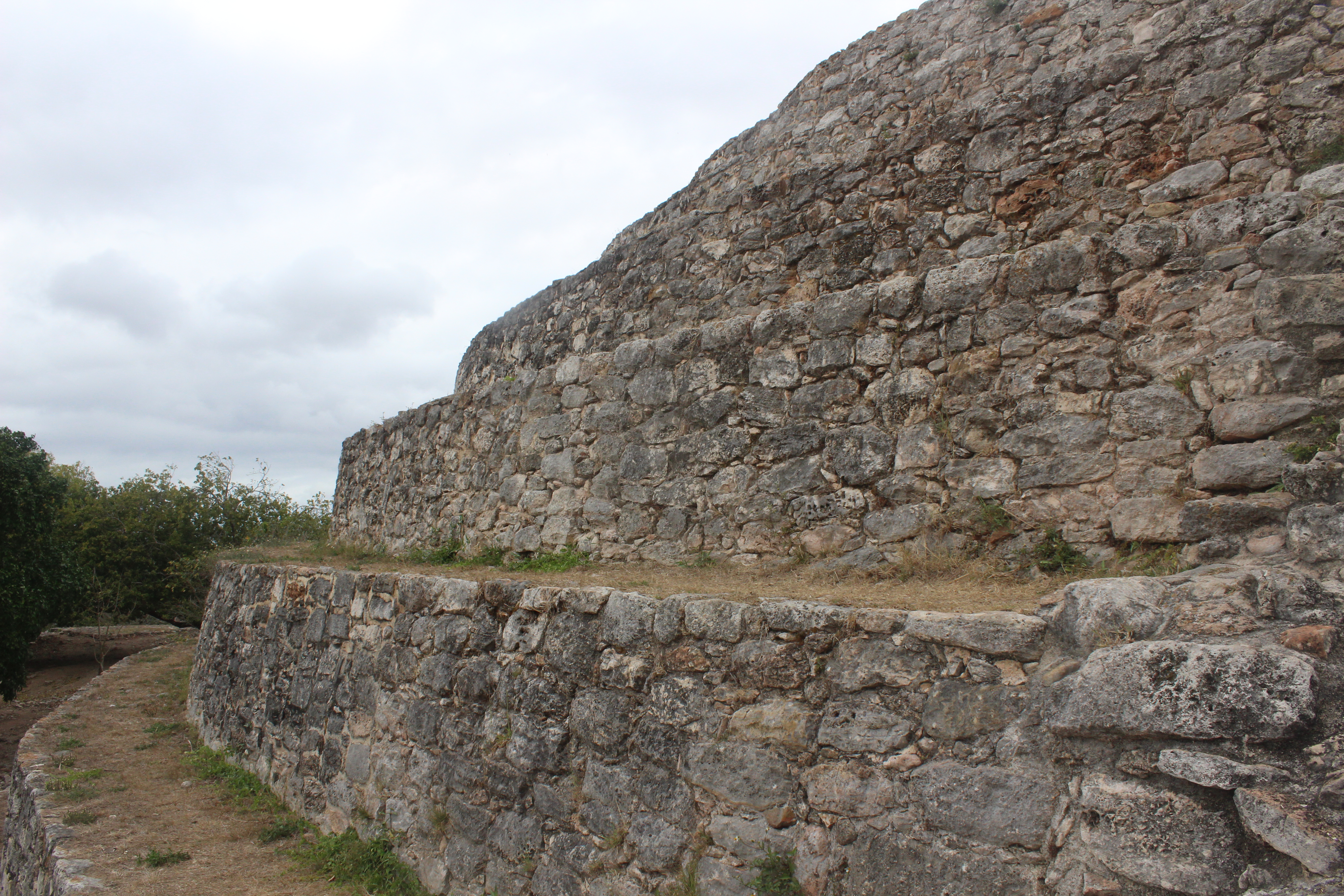 Getting hungry after descending from the pyramid, we drove a short distance to the Kikich Izamal restaurant. Founded in 1993 it has become the most popular restaurant of local cuisine in Izamal. 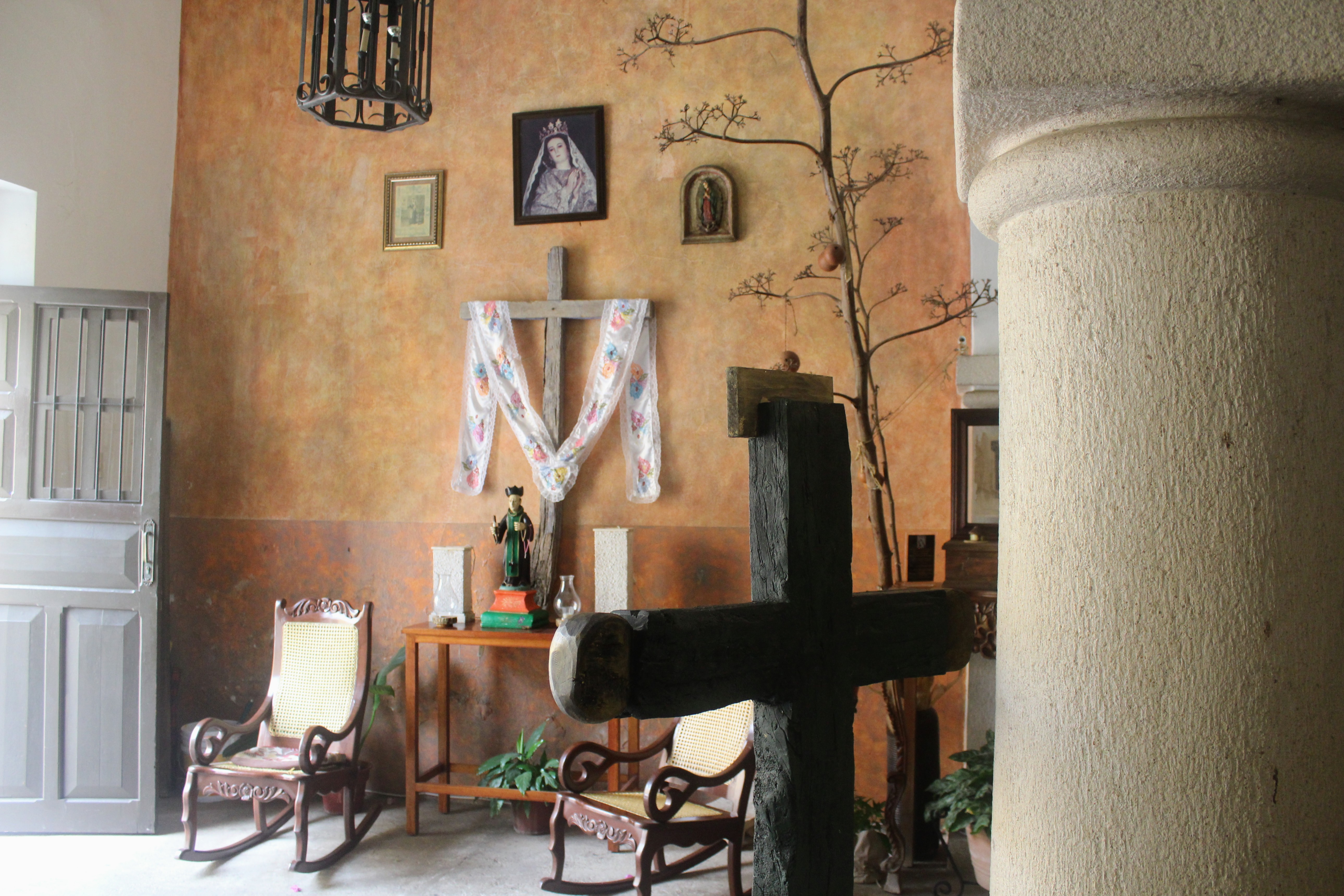 The restaurant has a small playground which occupied Ayan well, while we were waiting for the food. I ordered Cochinita Pibil, a traditional Maya slow-roasted pork dish. Its preparation involves marinating the pork meat in strongly acidic citrus juice and seasoning it with annatto seed which imparts a vivid burnt orange color. The resulting soury taste goes well with the blandness of tortillas. 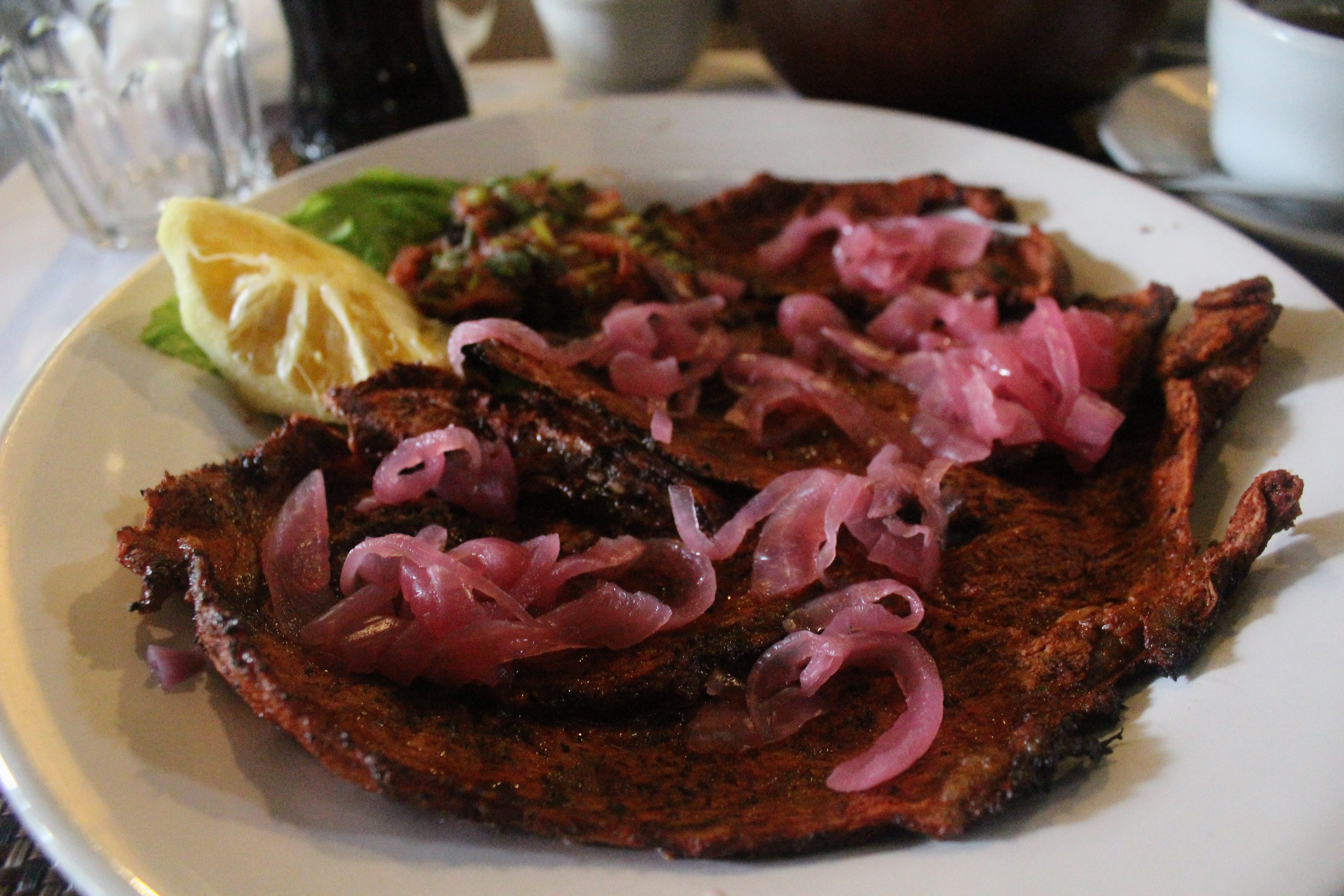 If modern yucateco kitchen is any indicator, Maya cuisine was full of sour dishes. I guess this way they could be preserved longer in the scorching heat of Yucatan.

Before getting into the car after lunch, I wanted to throw one last glance at the mustard-yellow streets of Izamal. It didn’t belong to Mexico I got to know in places like Guadalajara. Rather, it felt like it belonged to a much more ancient nation. 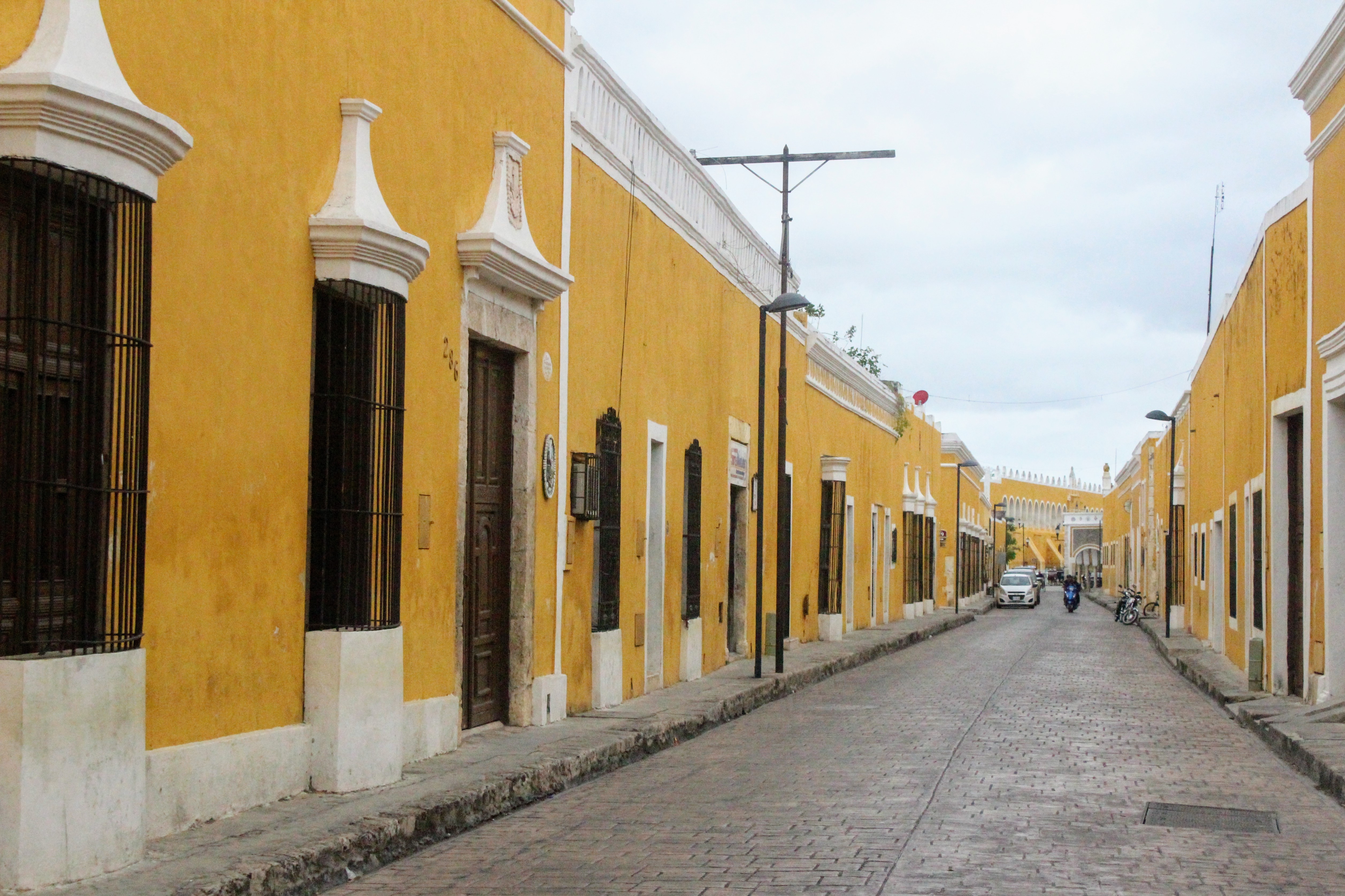 “I have to show you something most people visiting Yucatan don’t get to see”, Luis told me when we were in the car. “Have you heard of Homun?”.

Homun is a small municipality south-west of Izamal. Even though it’s rarely mentioned in tourist guides, Homun is an epicenter of cenotes. After visiting an underground river system near Tulum, it was time to see its geological cousines. Cenotes, the natural sinkholes filled with fresh water, are found throughout Yucatan. Their formation is linked with the meteorite impact that wiped out the dinosaurs. Homun has at least five cenotes, but since it’s not on the tourist routes, here they maintain their rustic and natural appearance, undisturbed by large crowds.

When we arrived in Homun, Luis arranged for a local mototaxi driver to take us on a cenote tour. 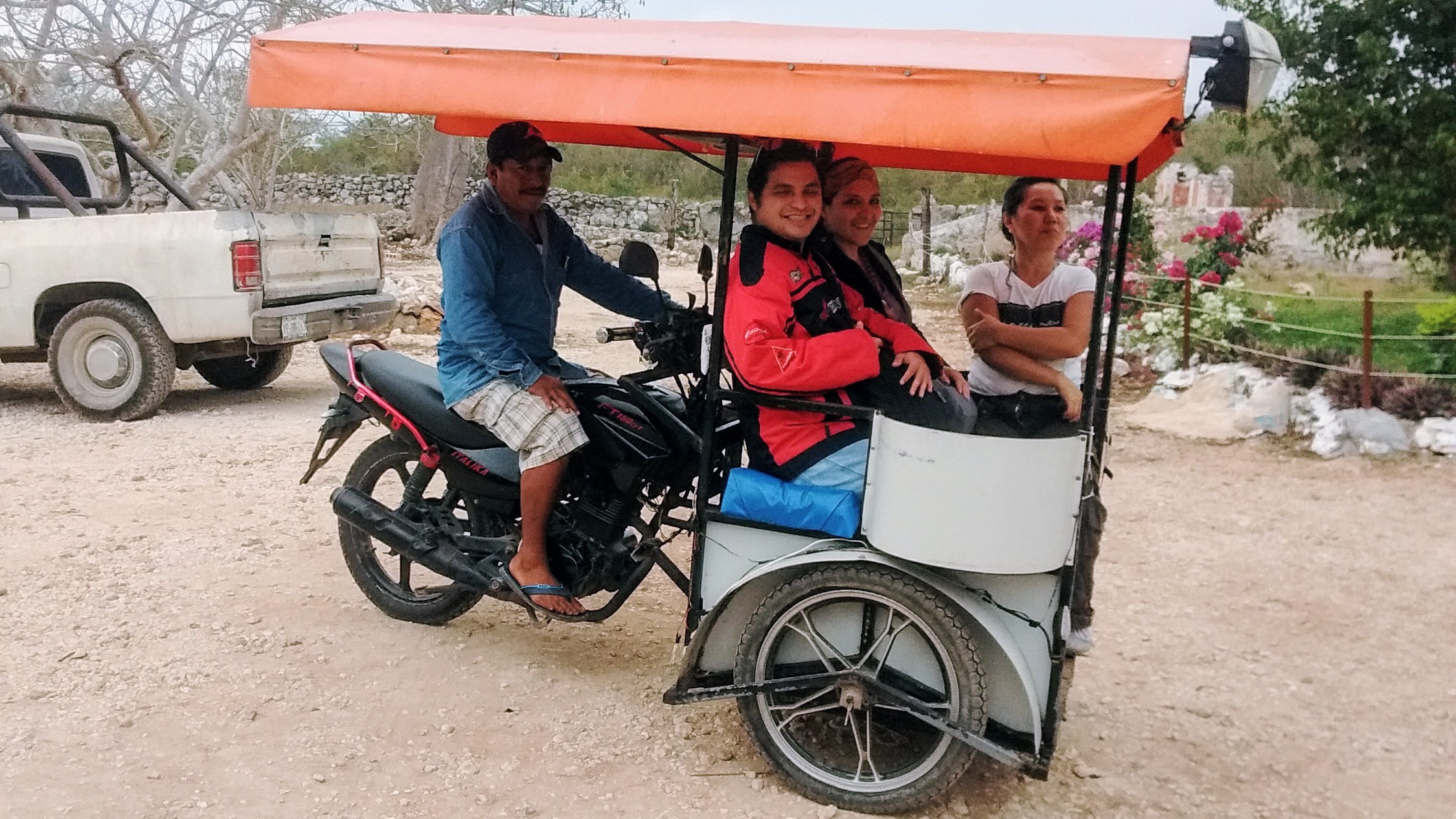 Diving into a narrow hole in the rock on a winding staircase lead to the first cenote. 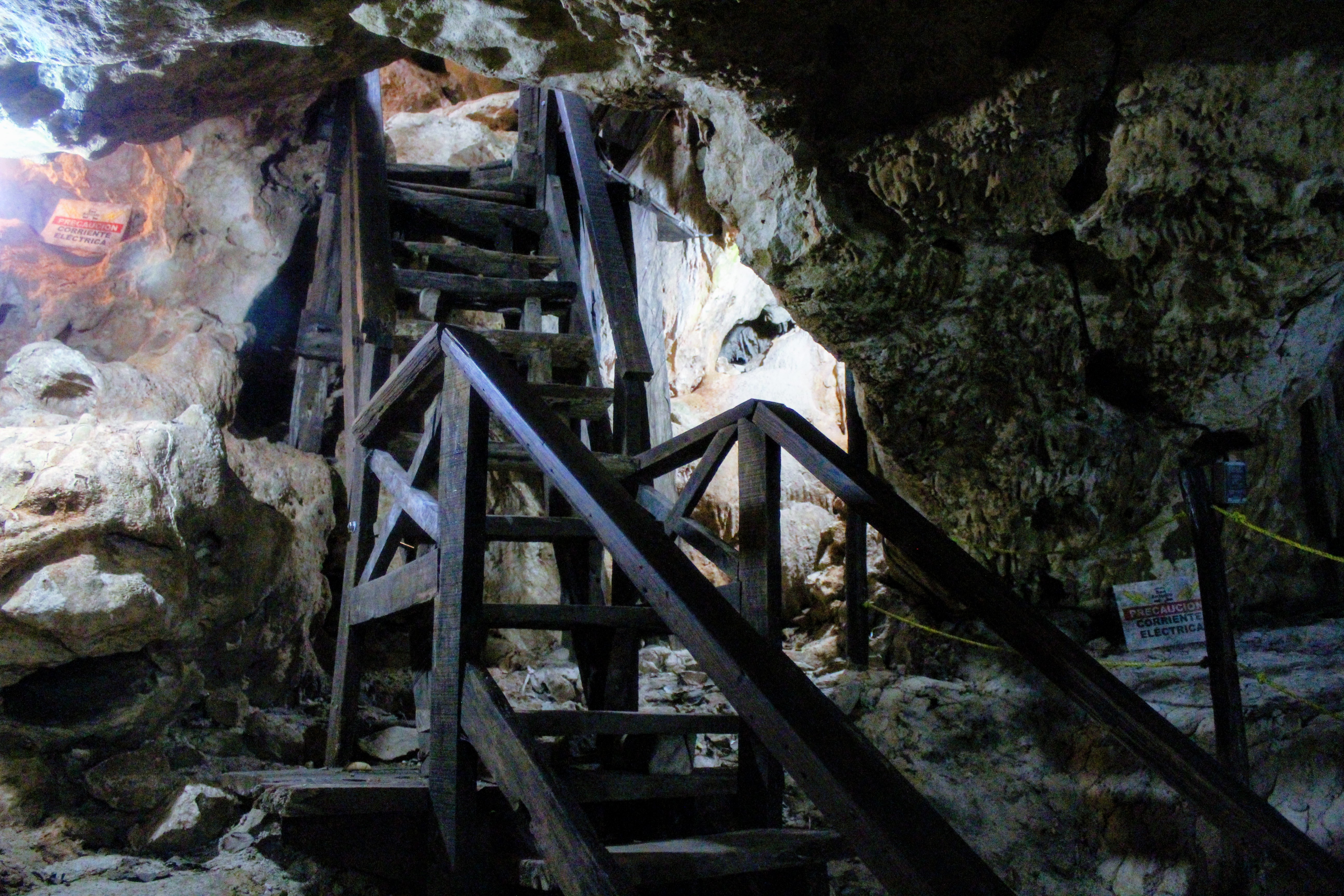 The air was warm, so I undressed and entered the water. It was clear and of comfortable temperature. But visually it was the least impressive of the bunch. 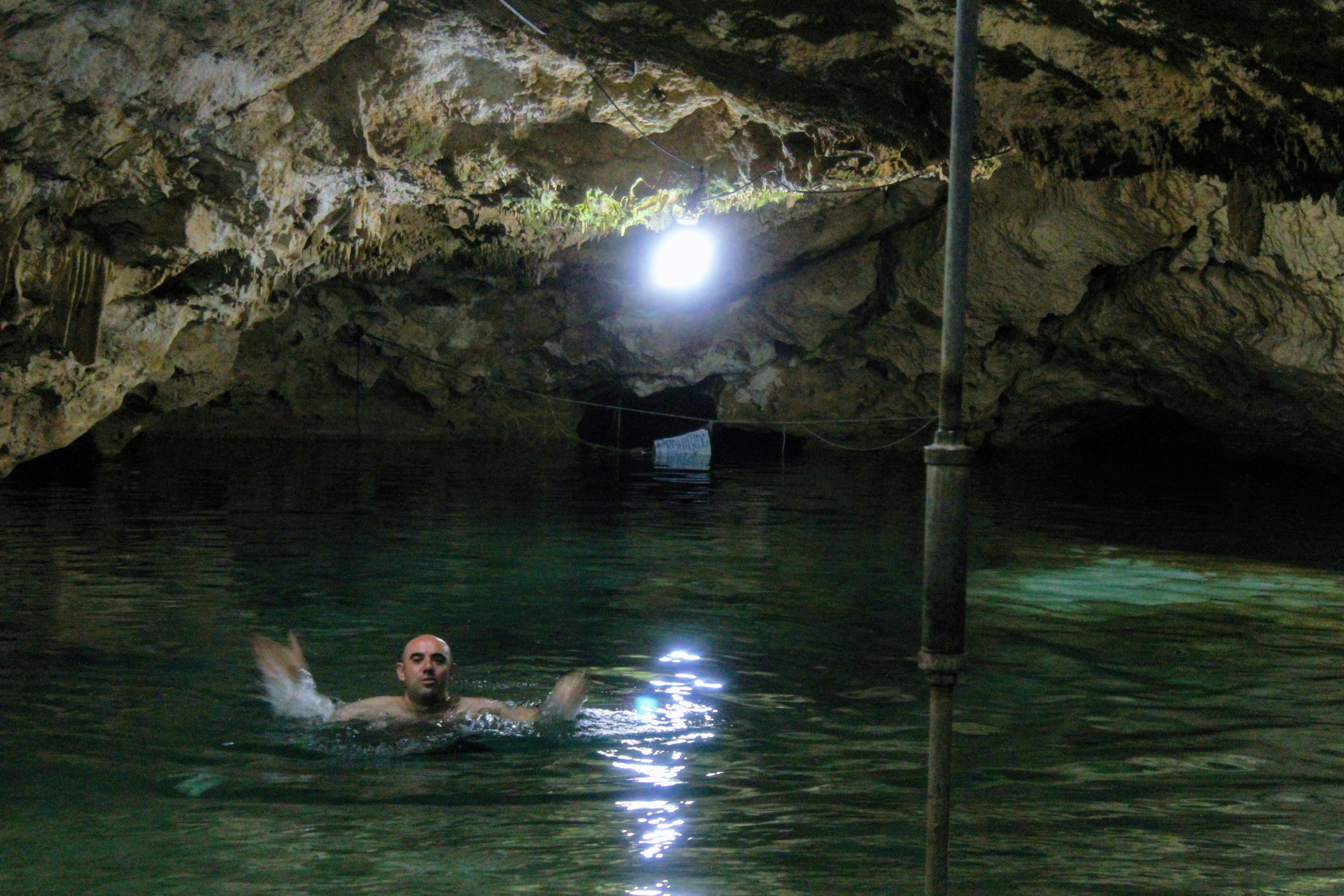 Back outside, that afternoon in Homun was turning chilly. Seated in the open mototaxi, exposed to a wind mixed with droplets of rain, we were shivering. But in the same time, intoxicated by the sudden switch of underground warm embrace to the outside bite, we couldn’t stop laughing. 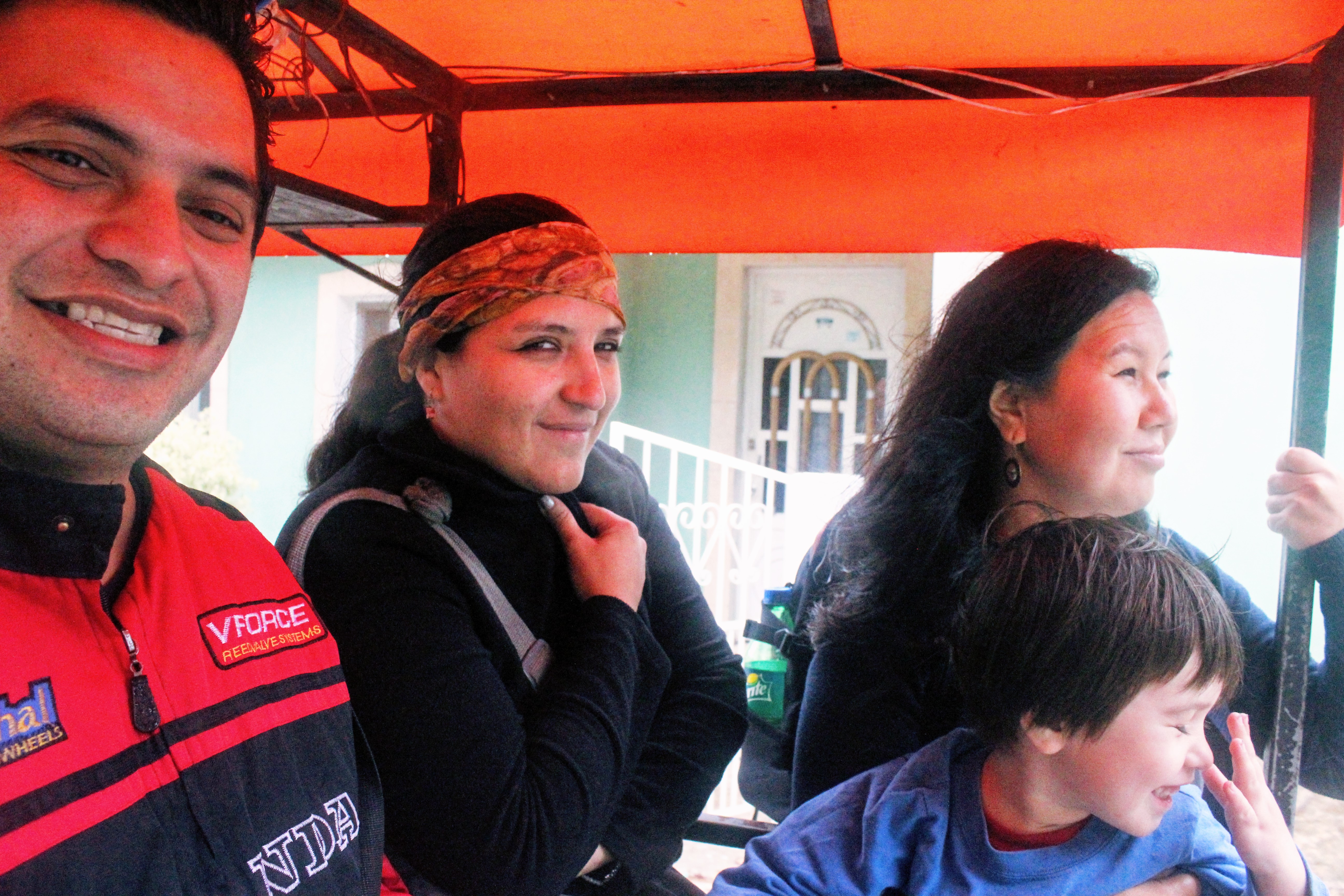 The second cenote, Tza Ujun Kat turned to be much more impressive. 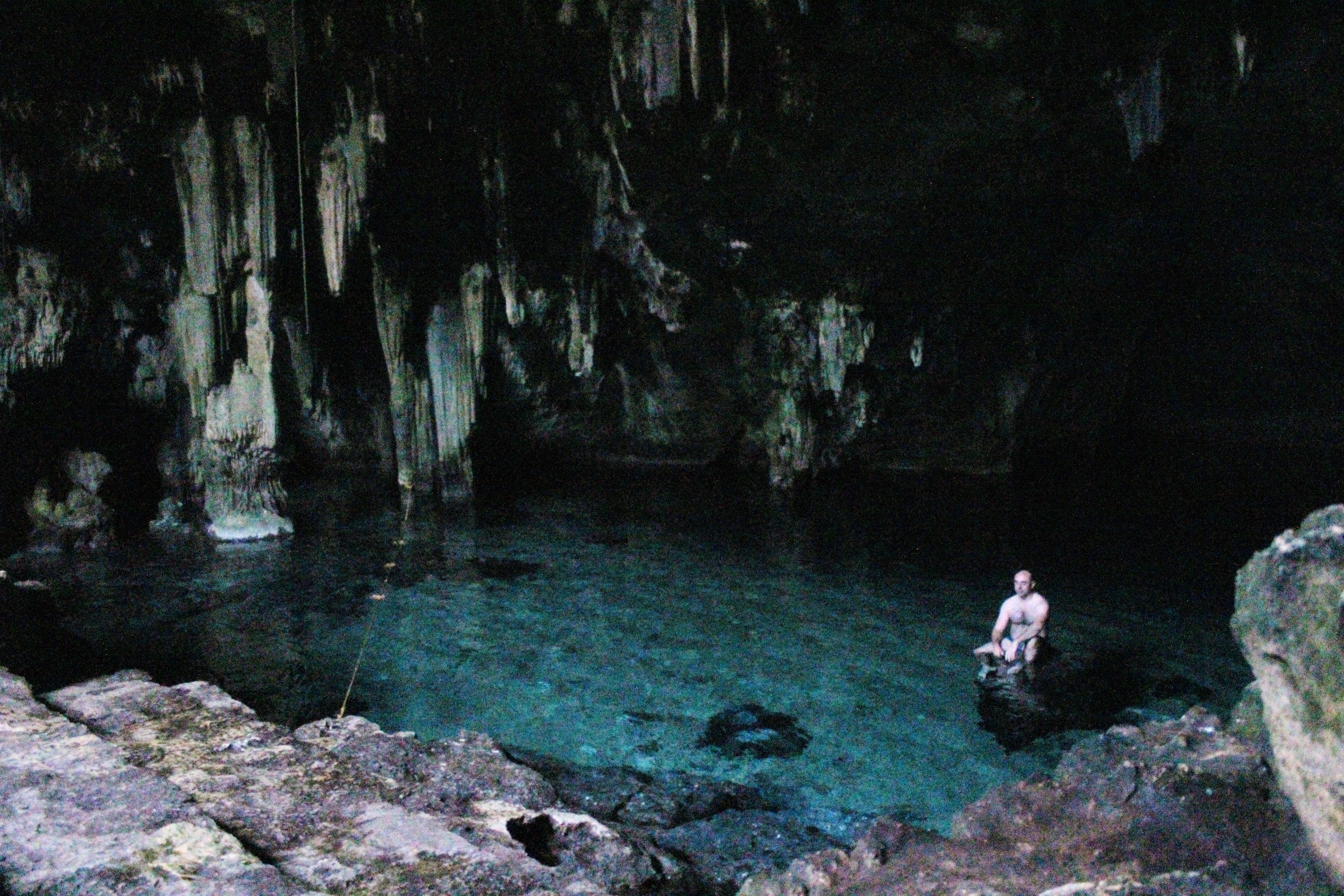 The water was crystal clear, the stalactites imposing and the opening in the ceiling provided a natural lighting to this little wonder of nature. 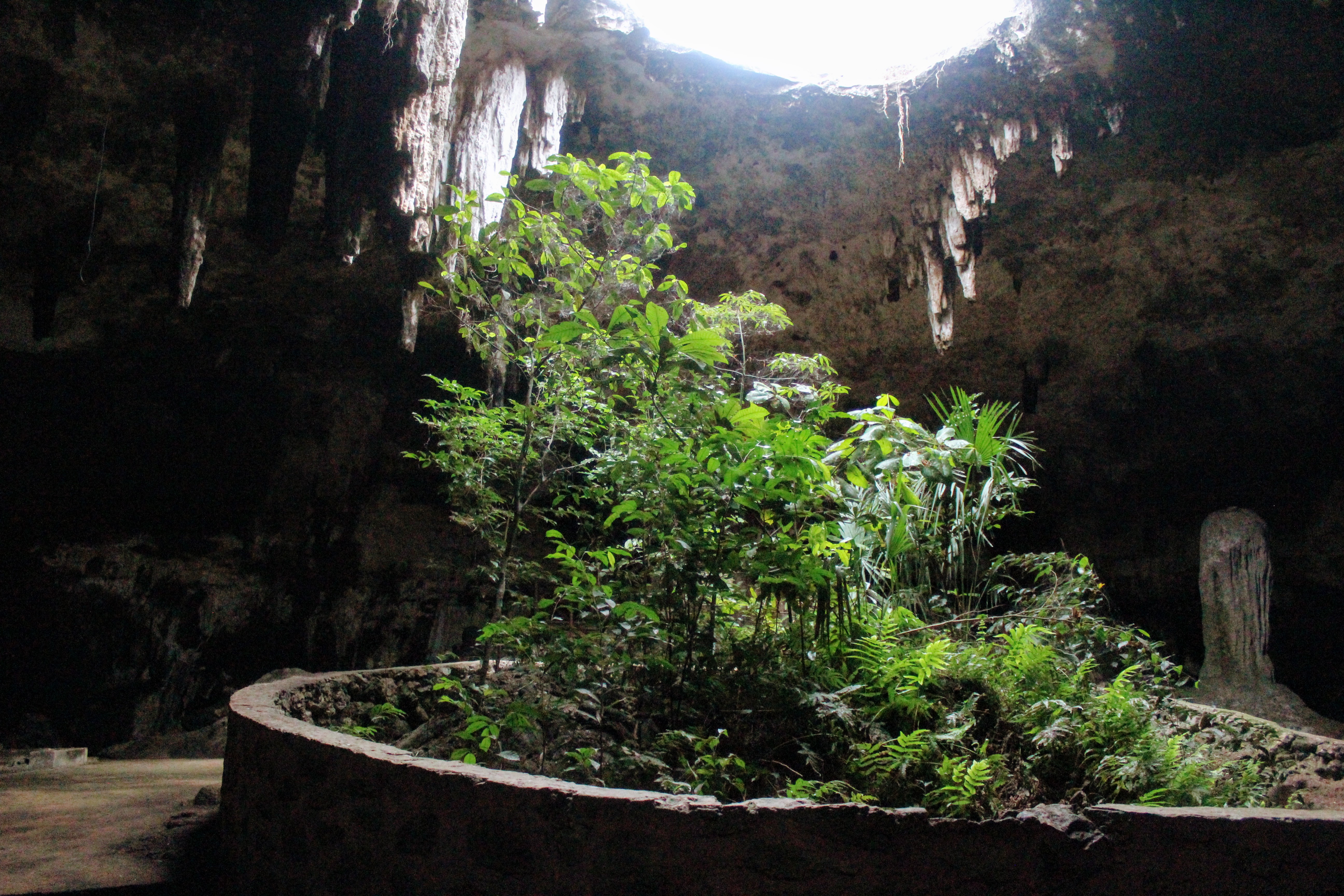 I was the only to enter the water. When I was out, we stayed a bit longer to enjoy the tranquil ambience of the place. It was Sunday, but we were the only ones here.

Santa Rosa was our last cenote that day. Spacious and deep, it has a diving tower. Satisfied with my previous submersions, this time I stayed out of the water, enjoying the view. 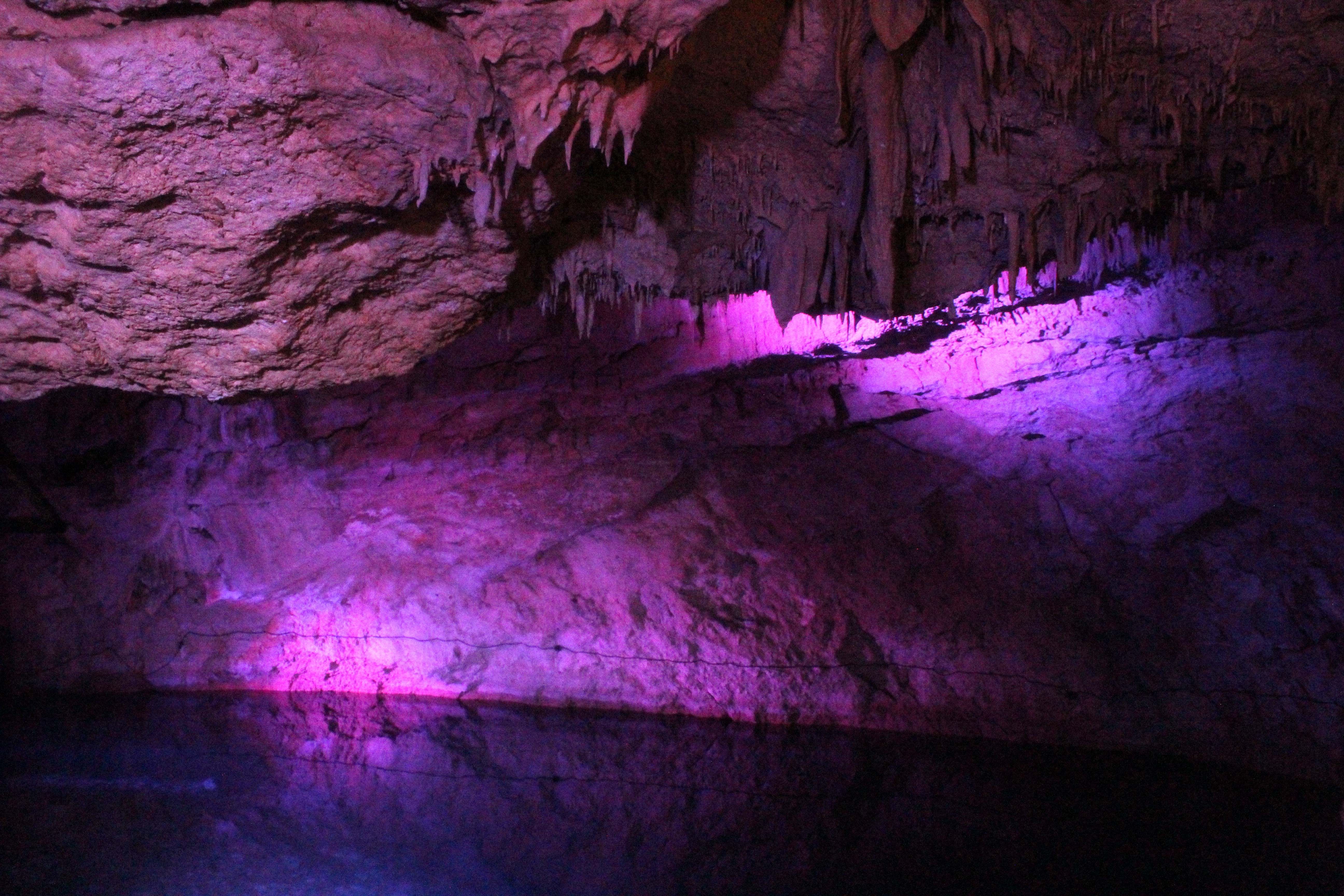 Outside an excavator was working. The mototaxi driver explained that a new cenote was discovered here recently, so now they are building an access point for it. I asked him who is going to own the new cenote. “It’s the property of the family under whose land it resides. But they have to build everything themselves. The government only makes sure it’s safe to visit”. 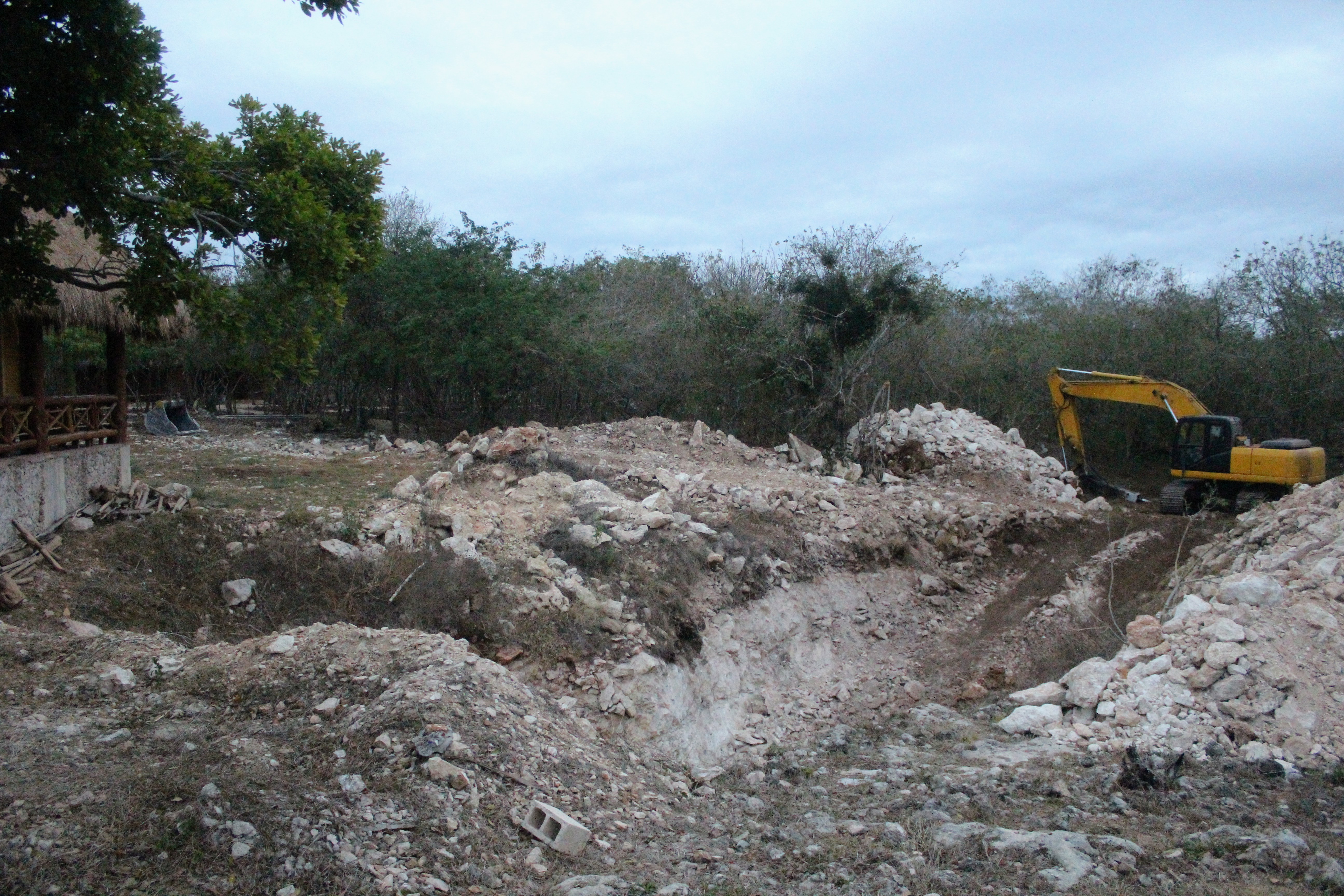 The sun was down when we returned to our car, parked in the backyard of our mototaxi driver’s house. His wife greeted us, then went inside the house and returned with a plate full of glasses. It turned out to be arroz con leche, “rice with milk”. It may not sound like much, but after a long, cold evening, a warm glass of this sweet yucateco dessert was simply perfect.

In the car, on way home to Merida I was reflecting on what we had that day. A guy we haven’t met before showed us places we wouldn’t have discovered otherwise. Not for profit, but out of love for his land and a sense of hospitality. This was a gift unlike any other.

p.s.
Coincidentally (or not), Luis has a small tour agency. His interest and knowledge of Yucatan are unparalleled. If you speak some Spanish, send him a message, and he will help you make your stay in Yucatan truly unique.