Having made Merida our base in Yucatan, for the first few weeks we limited ourselves to short day trips to Chichen Itza, Uxmal and Kabah. But it was time to venture farther east – where the white sands and turquoise waters of the Caribbean sea are the spectacular setting for an ancient Mayan city of Tulum. So Saturday morning we rented a car and headed to Quintana Roo for a long weekend on the Caribbean.

After 1.5 hour of driving we made a stop in a sleepy colonial town of Valladolid. Founded in 1545 by the Spanish, it was built atop a Maya town called Zaci, whose buildings were dismantled to reuse the stones to build the town. 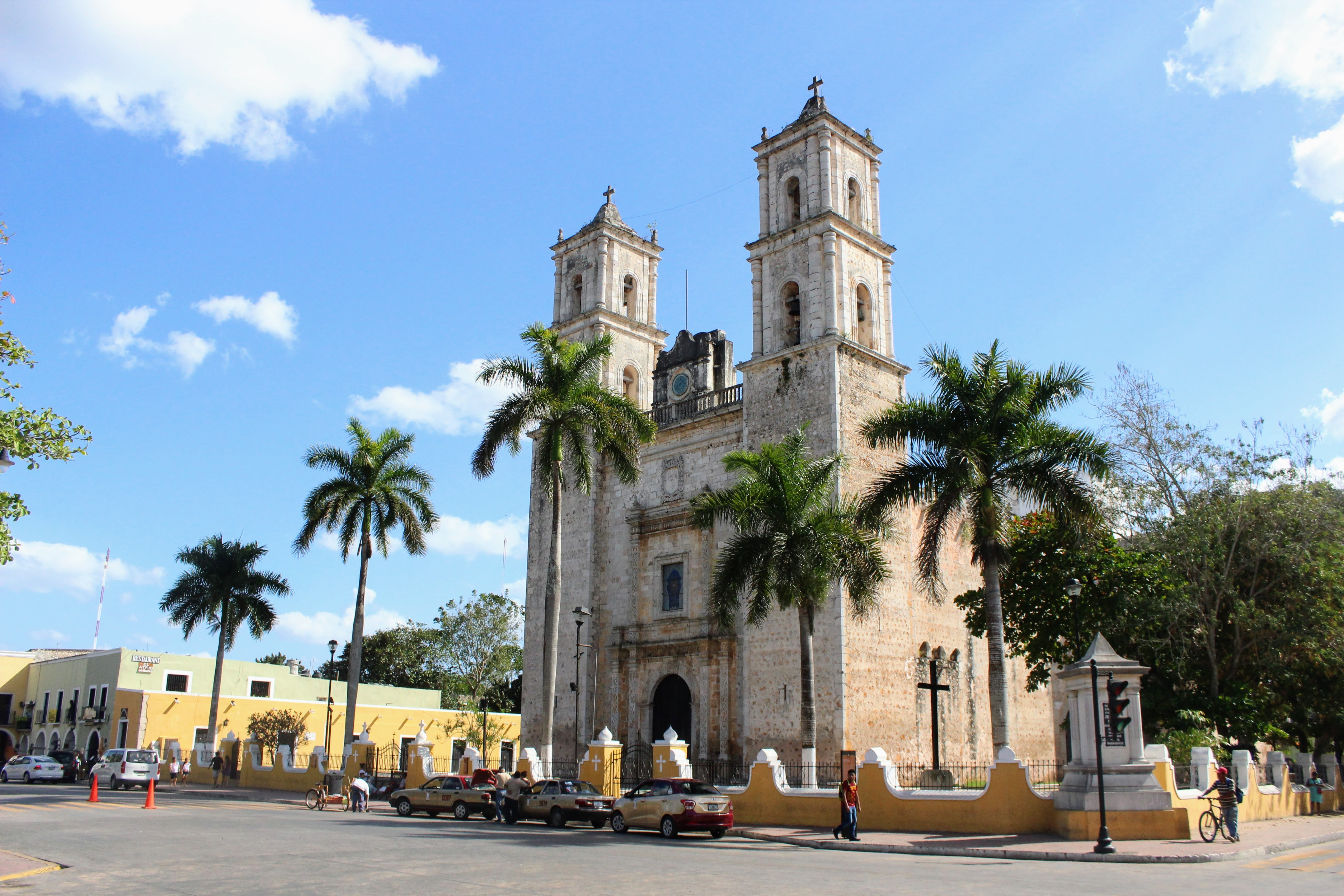 Seeing the old stones of the Cathedral of San Gervacio on the main plaza of the town, it’s not hard to imagine that their origin was probably from a local Mayan temple. 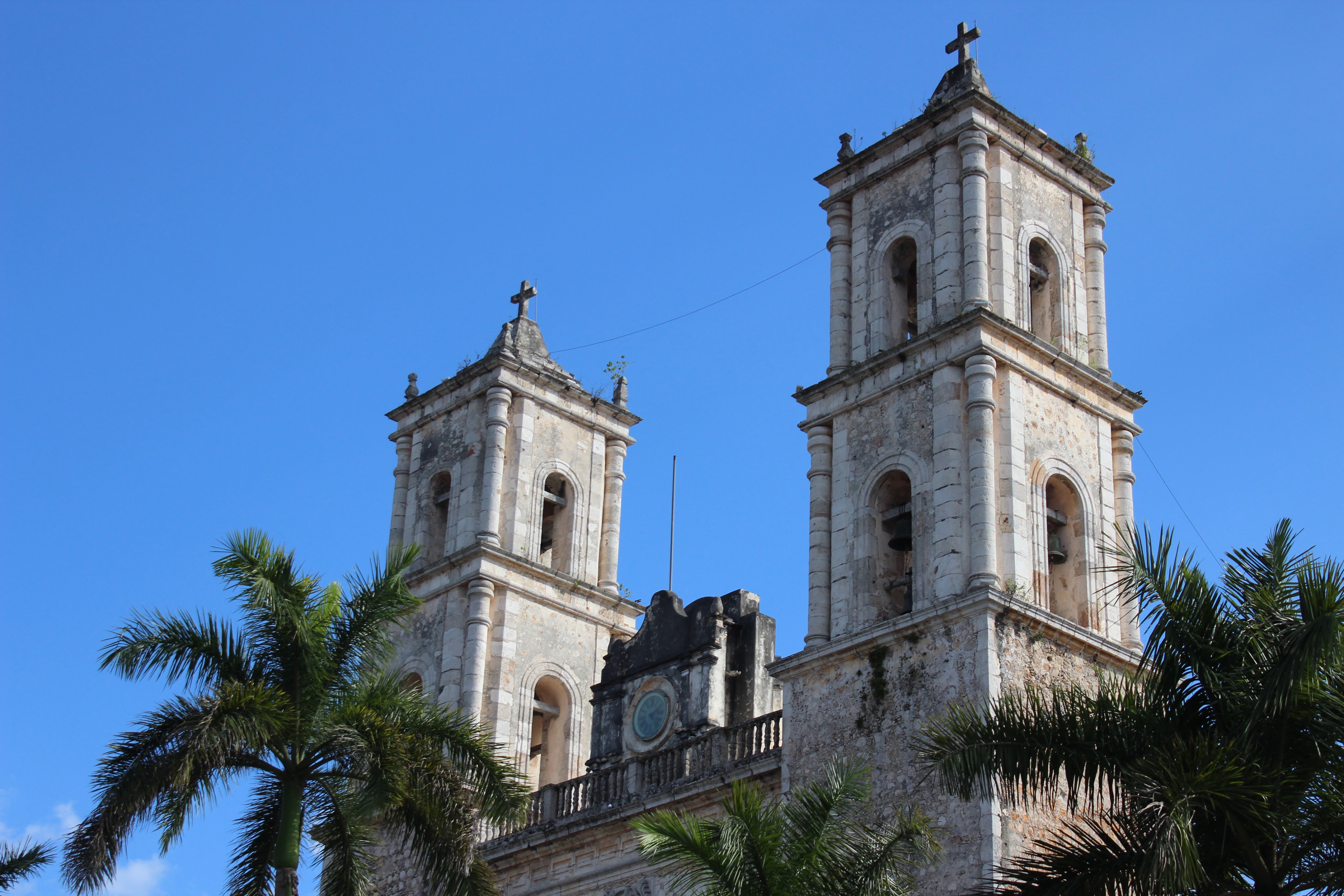 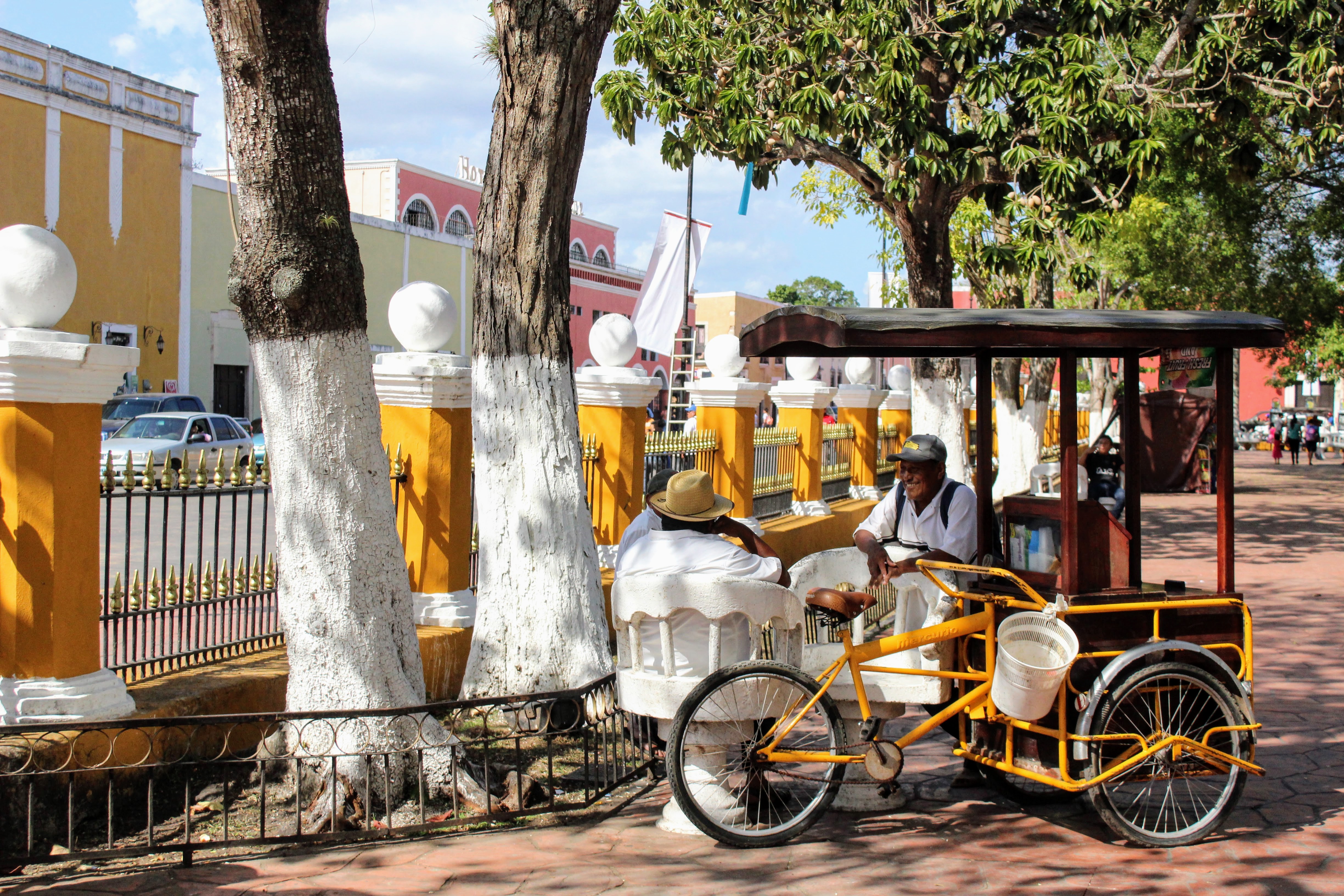 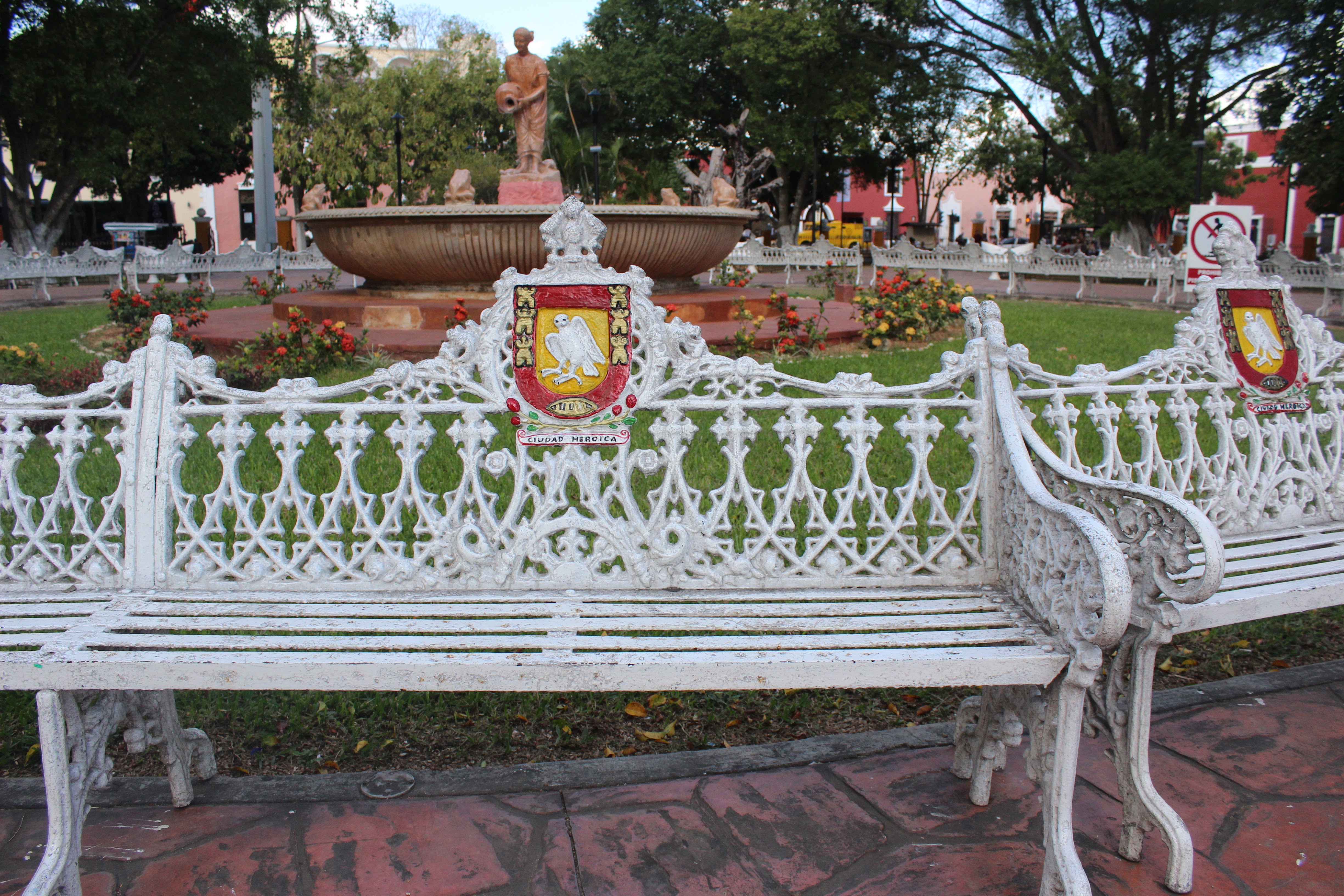 At midday, only a few sellers and moms with children bothered to show up here. 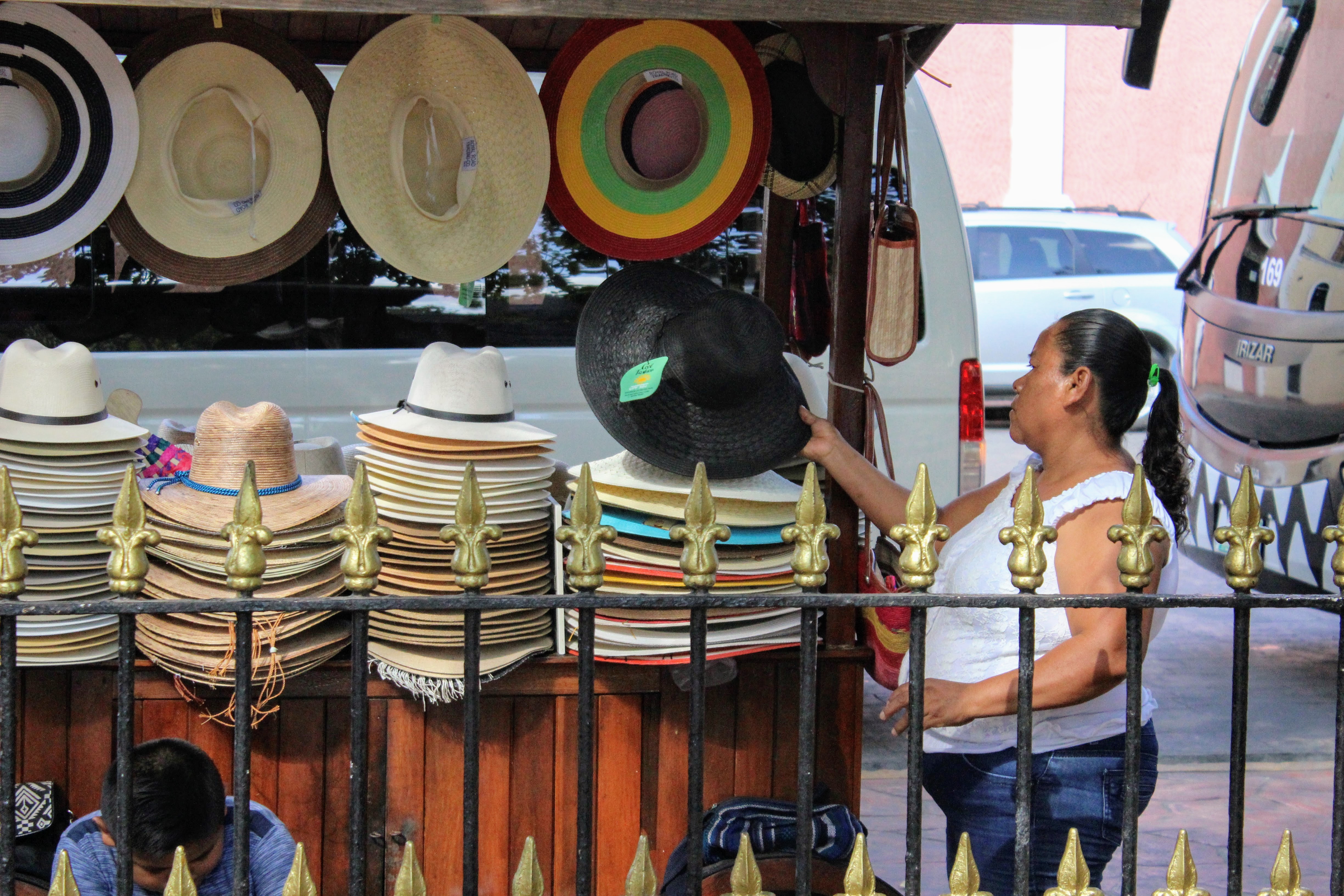 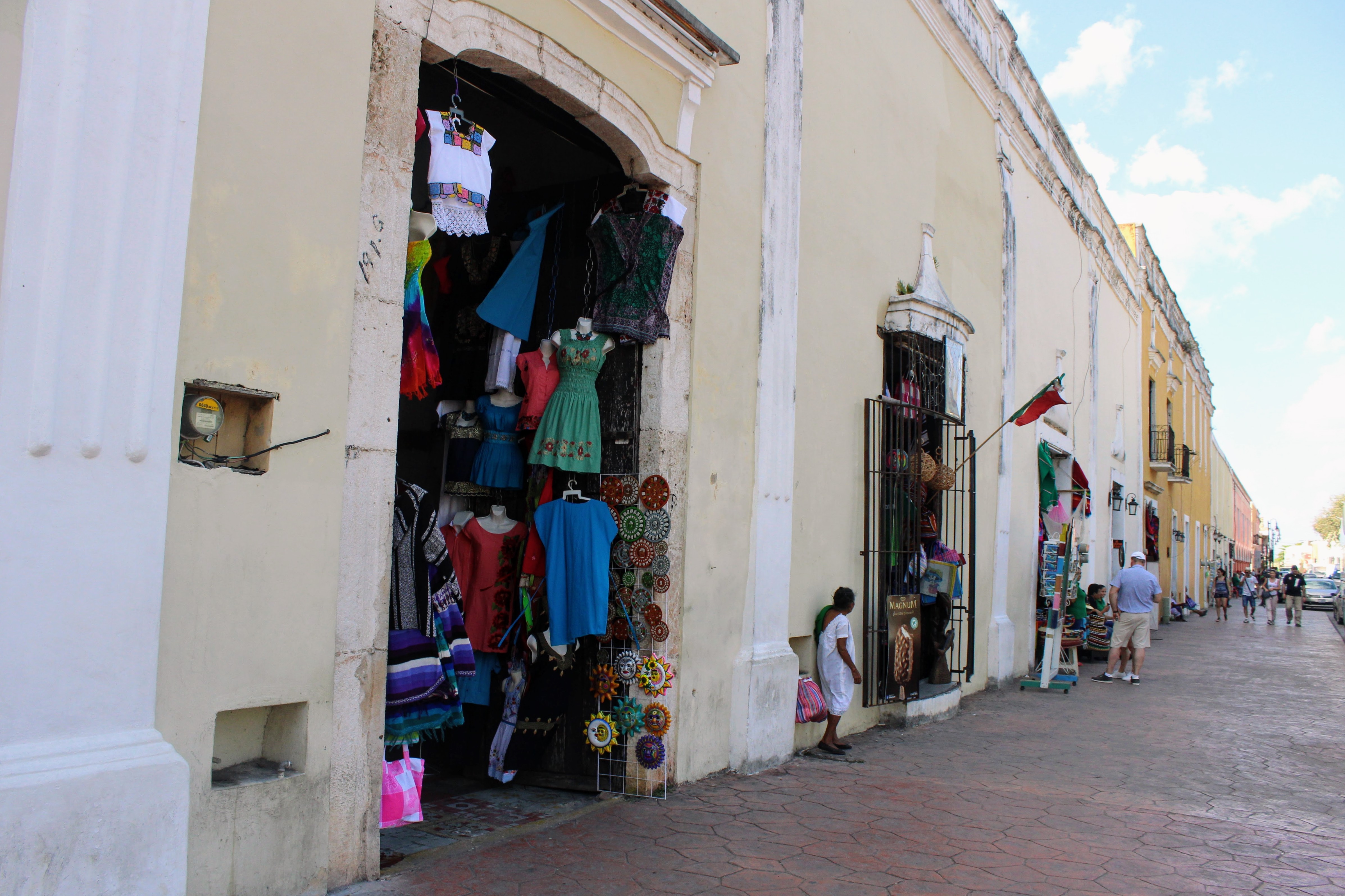 After lunch, back in the car, we continued south to Coba, a mayan site that lies conveniently on the way to Tulum. Up until the late 70s Coba was inaccessible and rarely visited. That changed when the Mexican government started planning to build the Cancun resort. They realized the touristic potential of a nearby Mayan site, and a modern road was built. 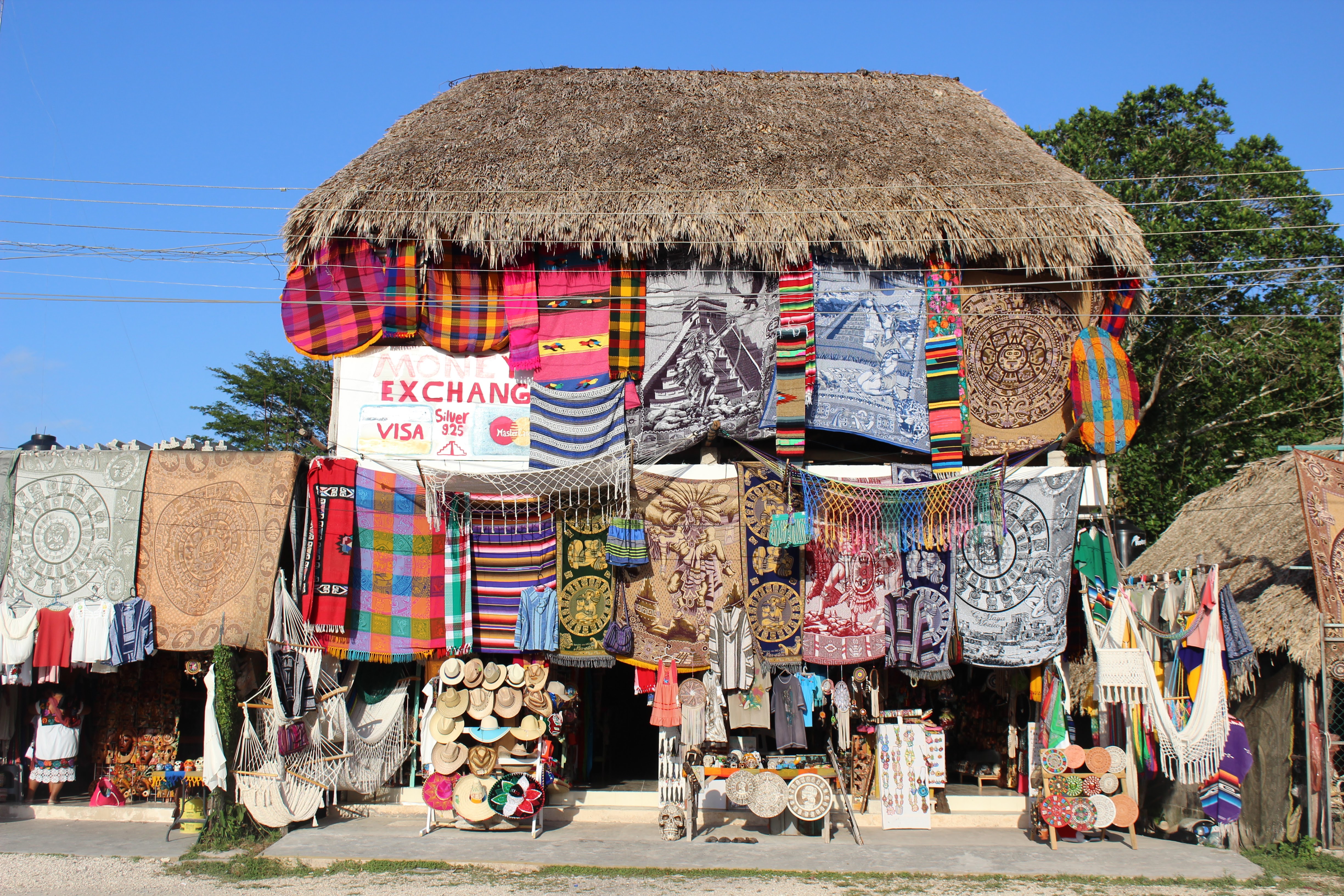 It was late noon when we entered the site. Surrounded by jungle, with most visitors gone, the slow, laid-back morning in Valladolid gave away to an eerie, silent evening.

La Iglesia, “The Church” in Spanish (don’t mind the Spanish names, they bear no actual significance) is the most prominent structure right at the entrance to Coba. 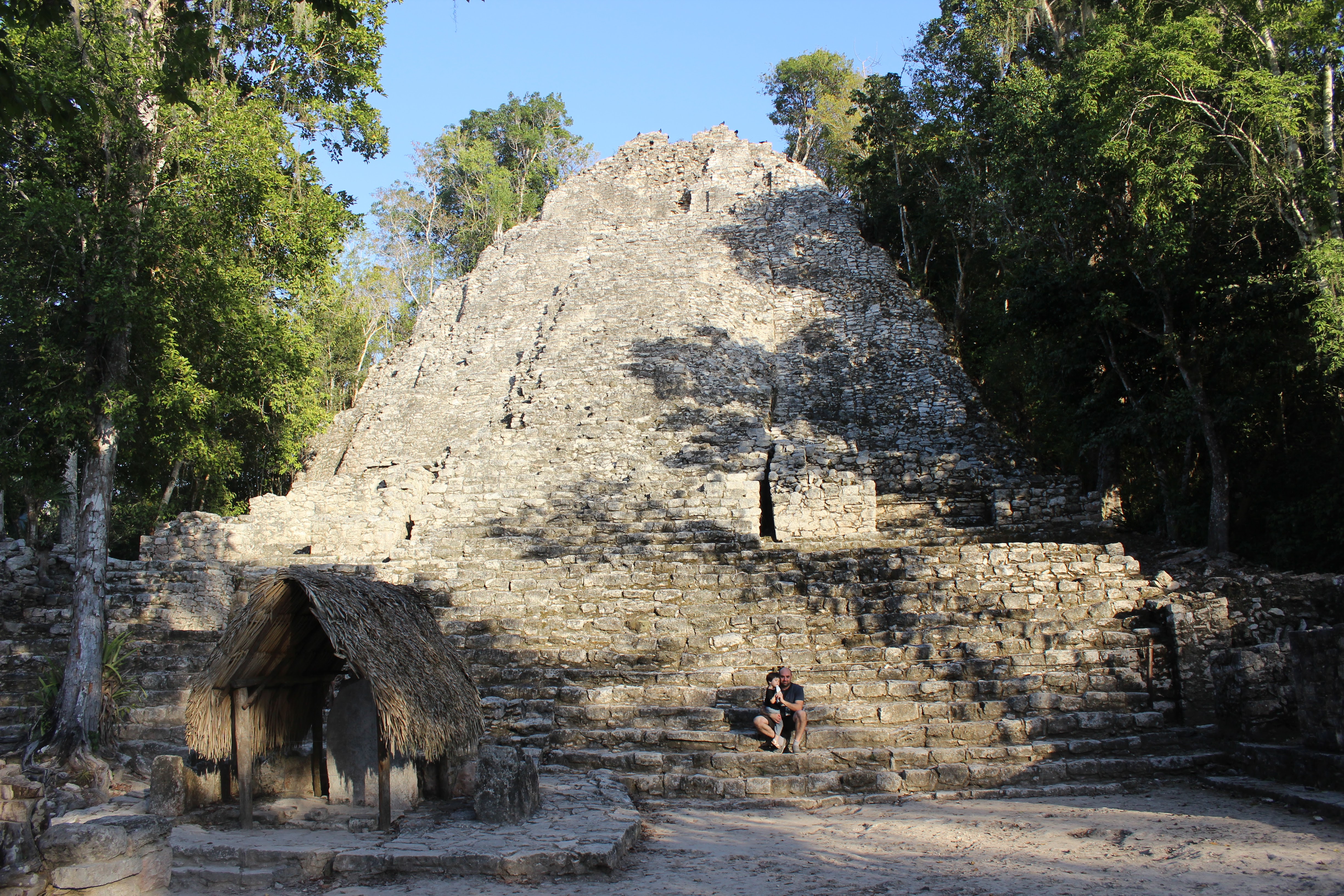 Vultures are the sole habitants at the top of the structure. 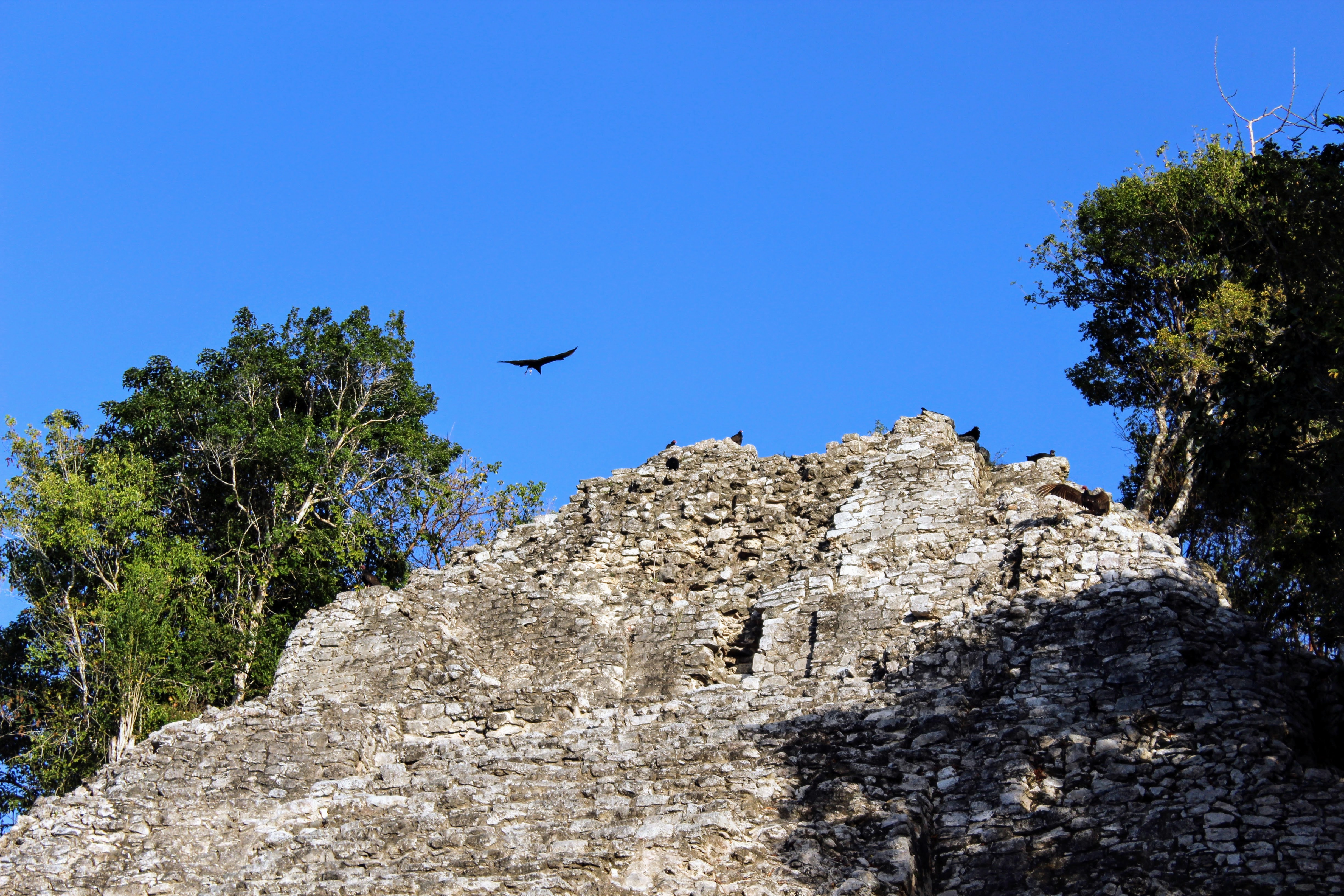 Coba was estimated to have had some 50,000 inhabitants at its peak, and the built up area extends over some 80 km².  The bulk of a Coba’s major construction seems to have been made between 500 to 900 AD. However, Coba remained an important site in the Post-Classic era and new temples were built and old ones kept in repair until at least the 14th century.

A typical Mesoamerican ball court is located next to “the church”. Notice the rings, through which the players were trying to pass the rubber ball, using nothing but hips. 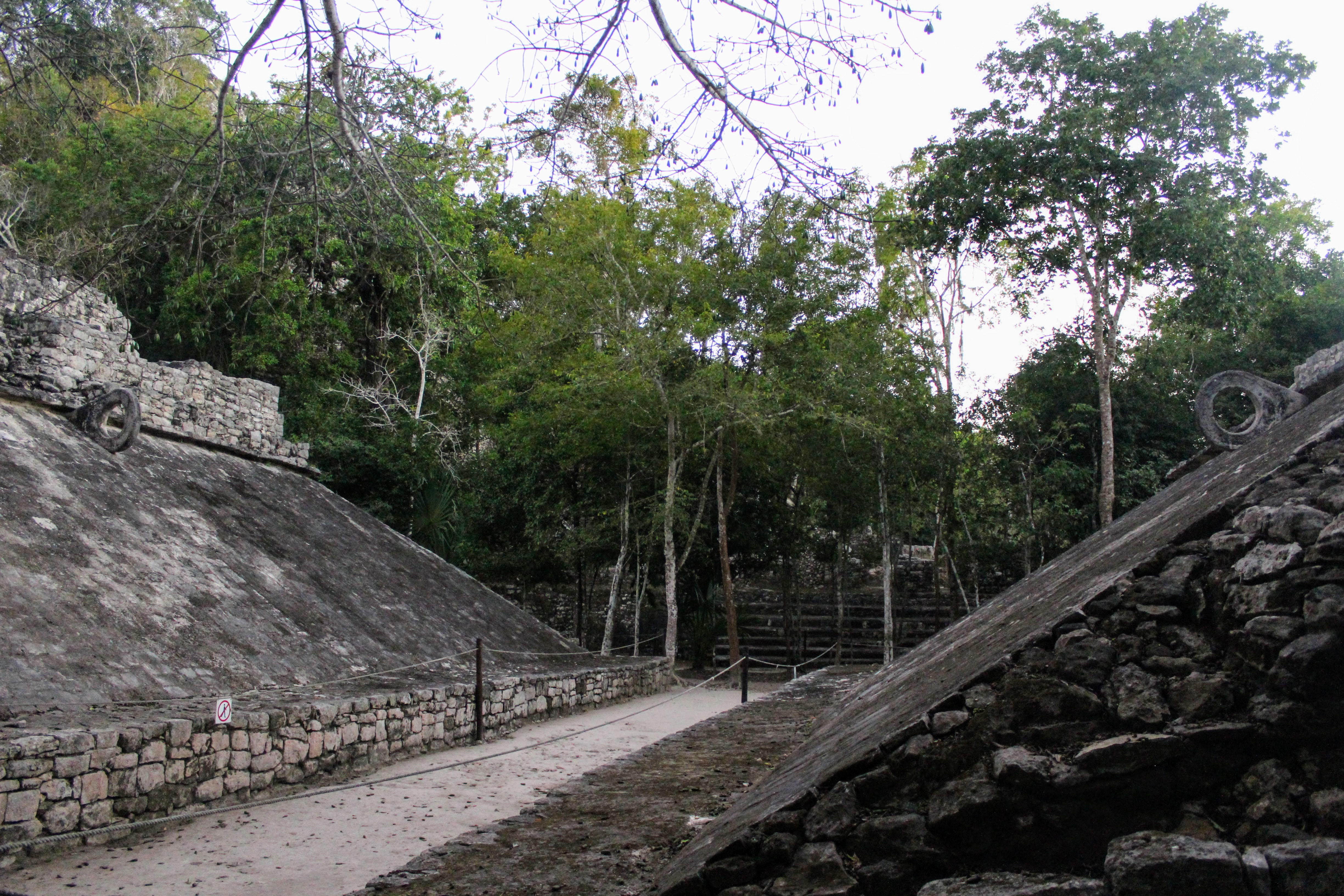 Coba was an important trade link between the Caribbean coast and inland cities. A network of ancient roads called “sacbé” in Maya, which means “white road” radiates out from Coba. By all accounts the ancient Maya did not use the wheel, so it is still an enigma as to why they put so much effort into building such impressive roads. 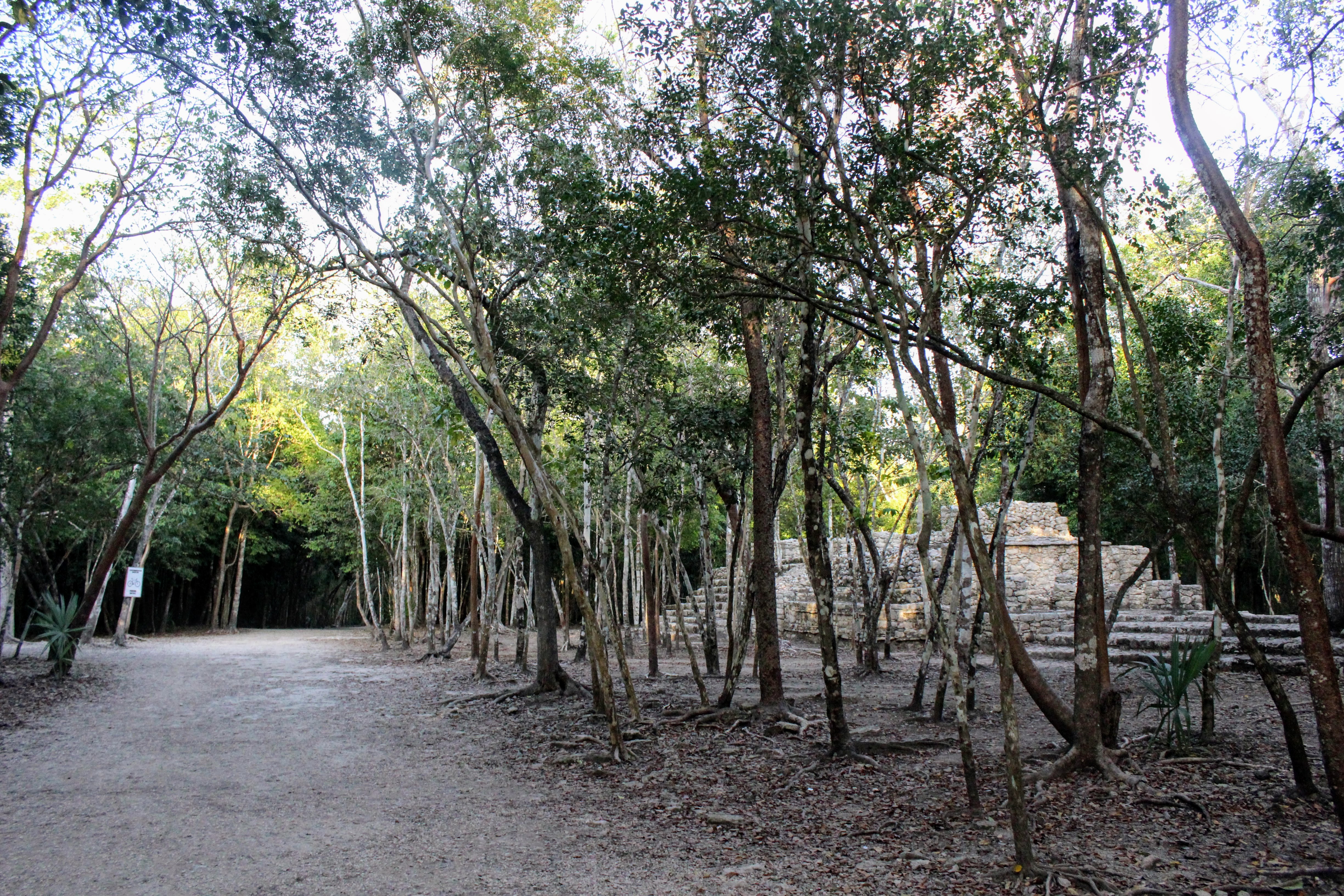 Coba is spread on a large area, so covering it on foot is unpractical. Instead, we got a ride on a bike, seated in a small carriage at the front of the bike, with a local driver doing the hard work of pedaling. After a 10 minute ride, we were at Nohoch Mul, the largest pyramid in Coba. At 42 meters, it’s the highest man-made structure in Yucatan. And unlike the pyramid of Chichen Itza, it’s still allowed to climb it. 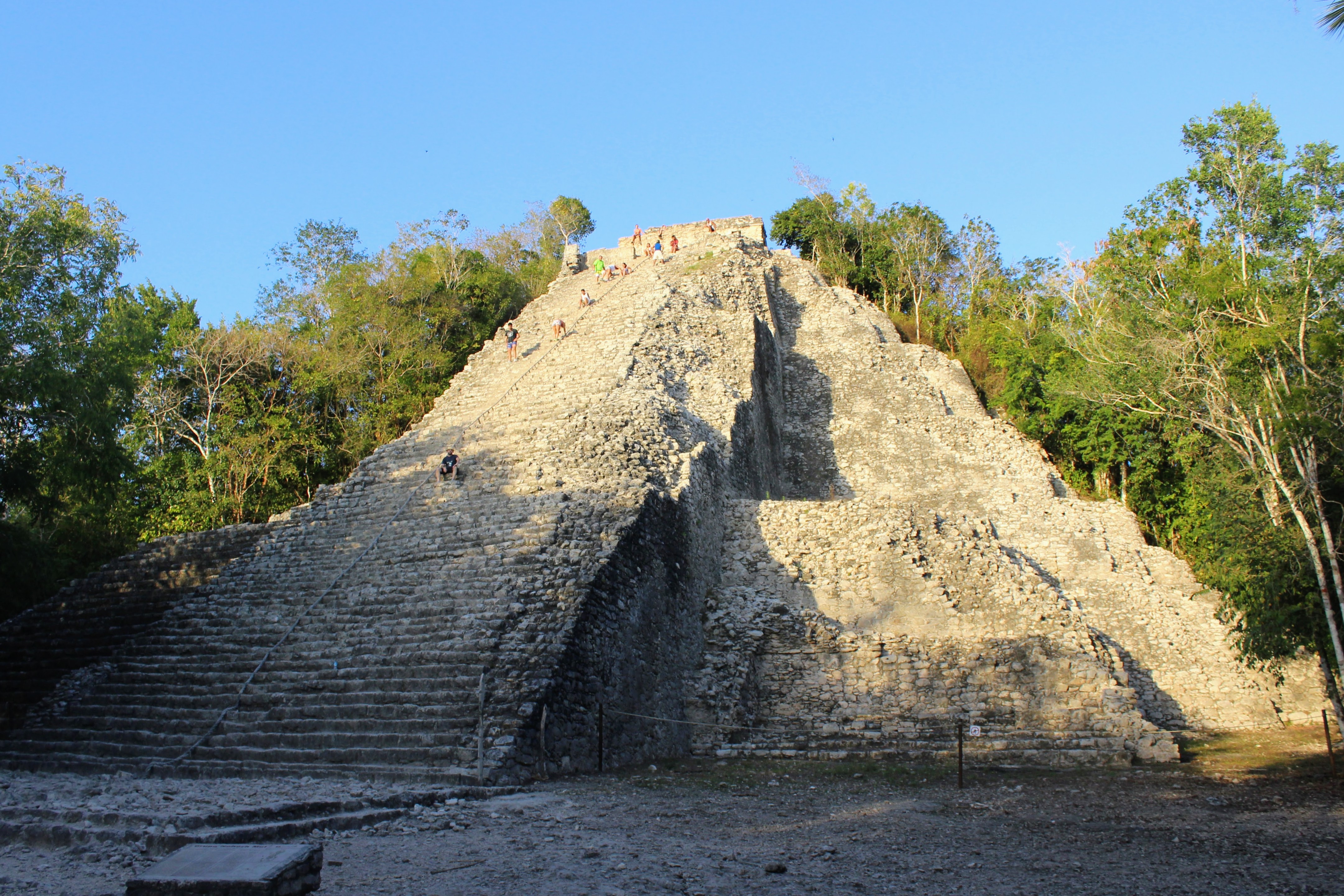 While Oxanna and Ayan stayed at the bottom, I climbed up. 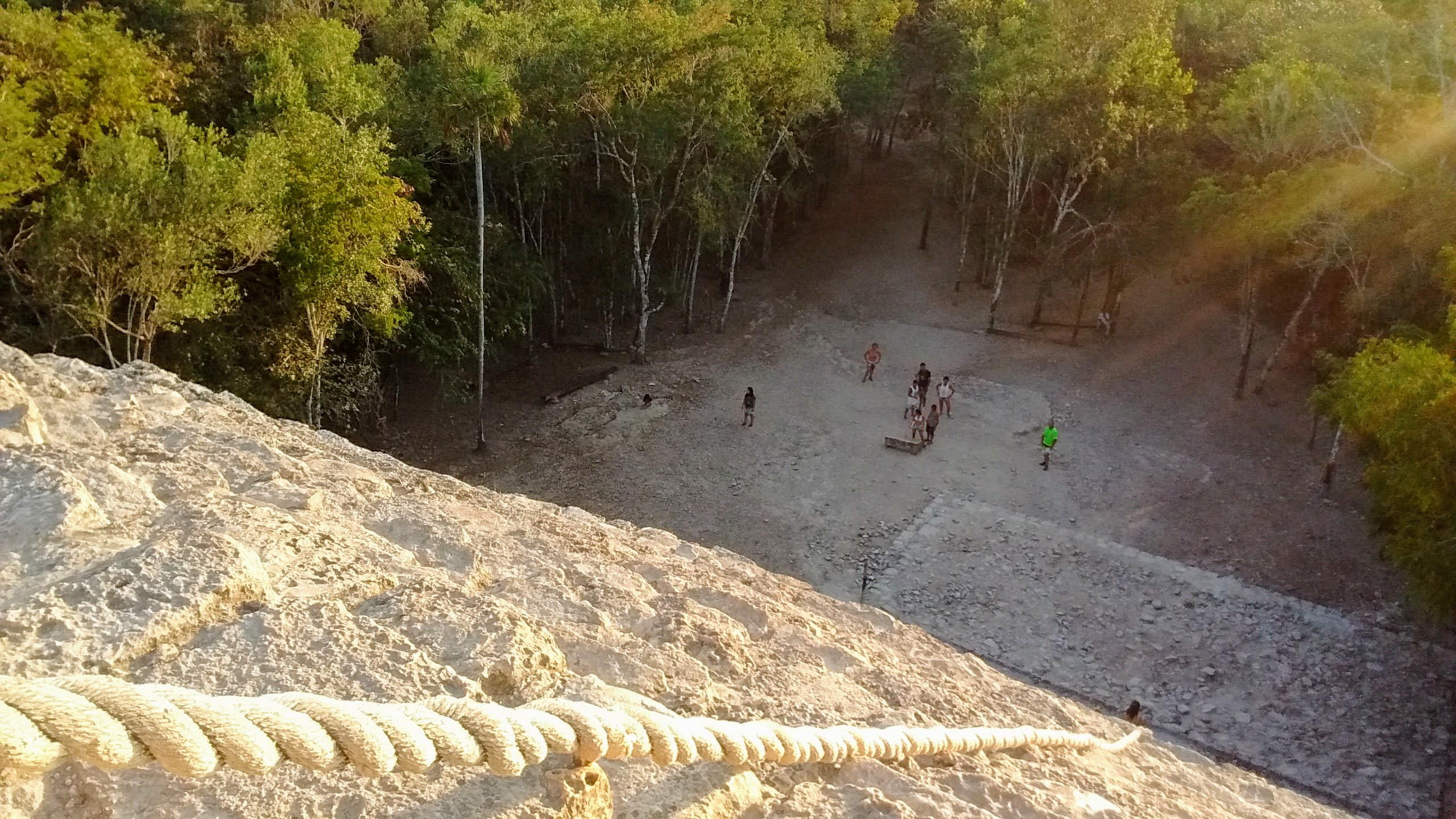 From the bottom it didn’t look nearly as nerve-wrecking. 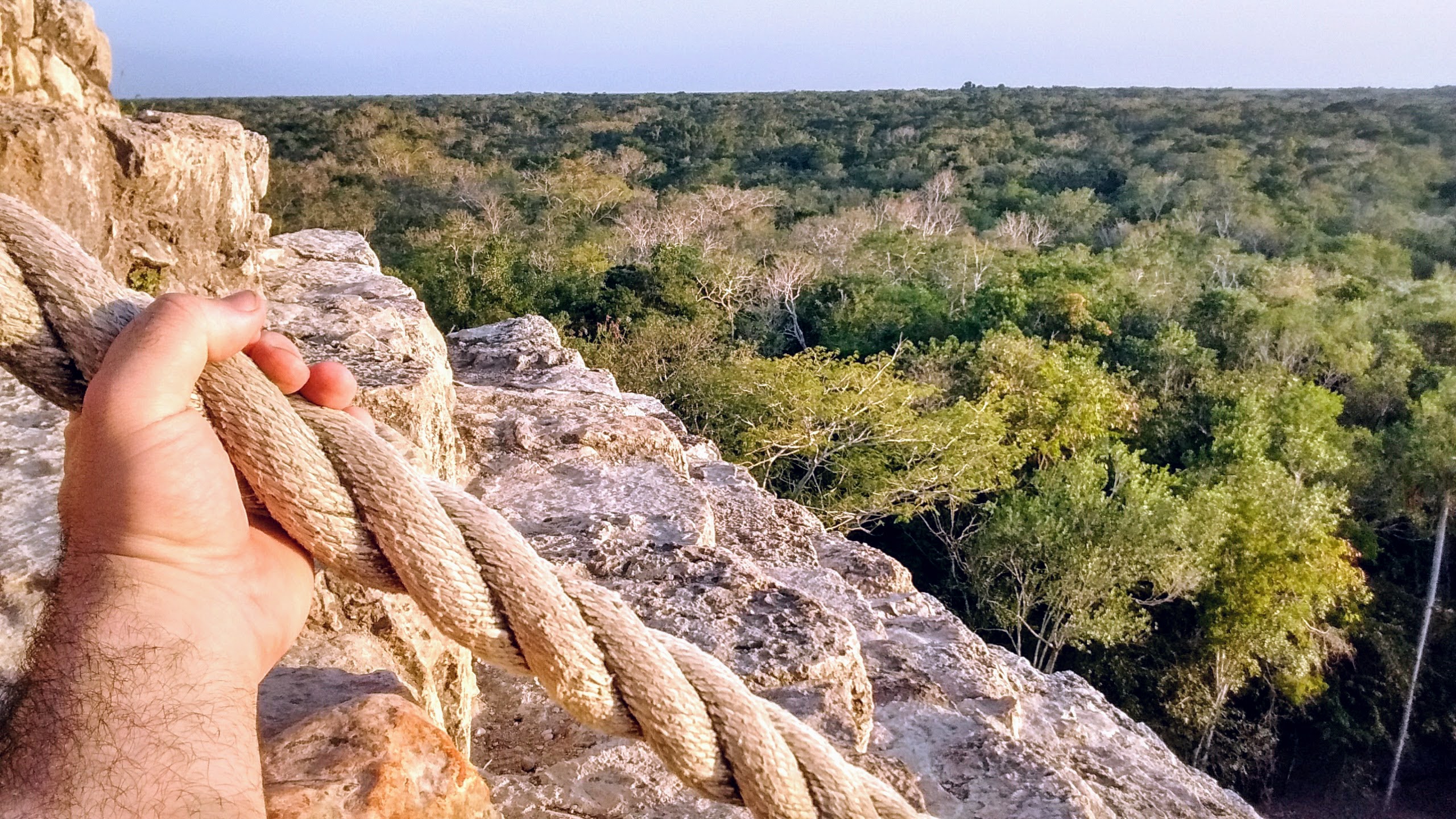 At the top of Nohoch Mul, the view is breathtaking. Despite thousands of years of human presence on the peninsula, you can see just how much of Yucatan is still covered with jungle. 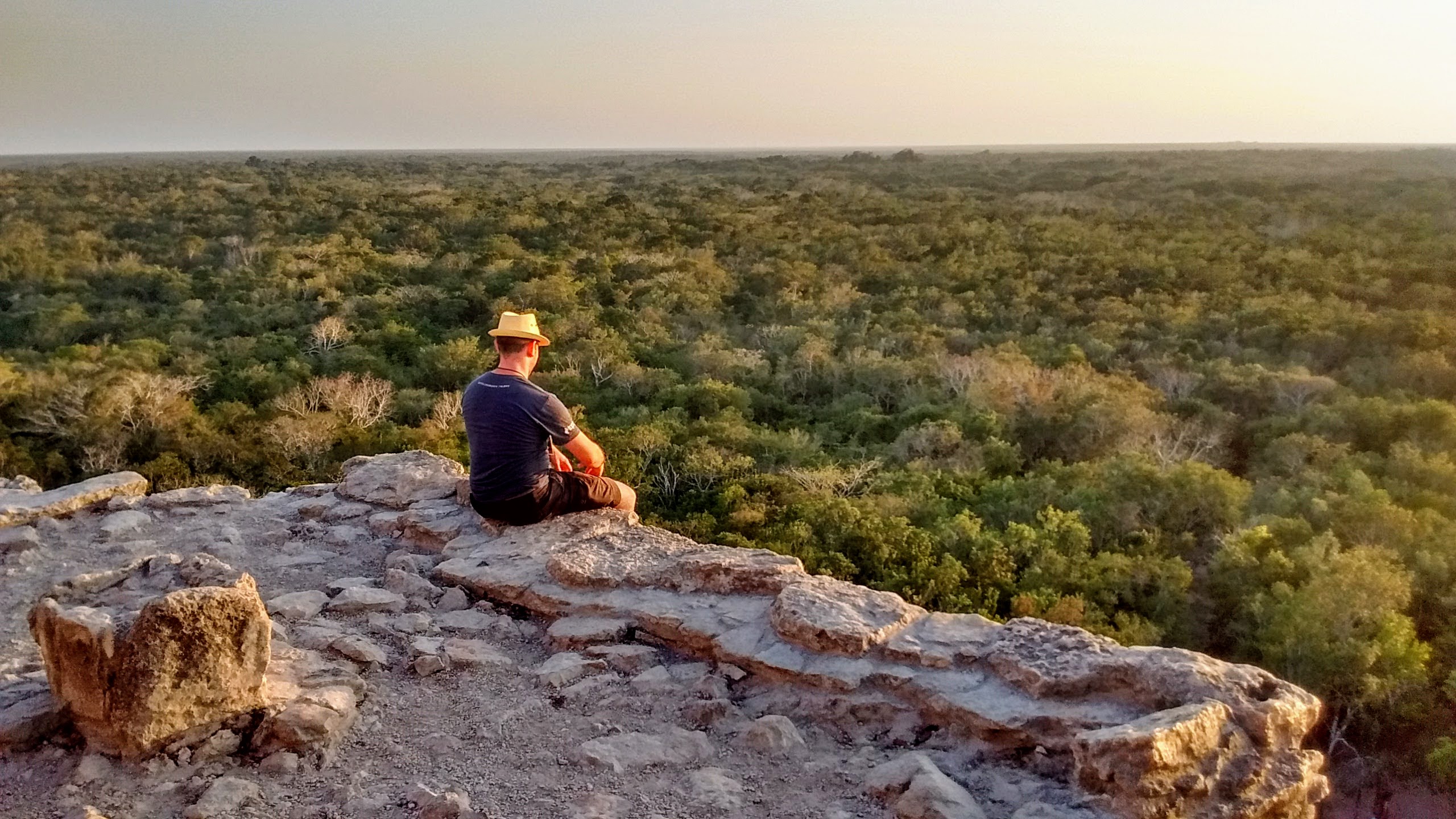 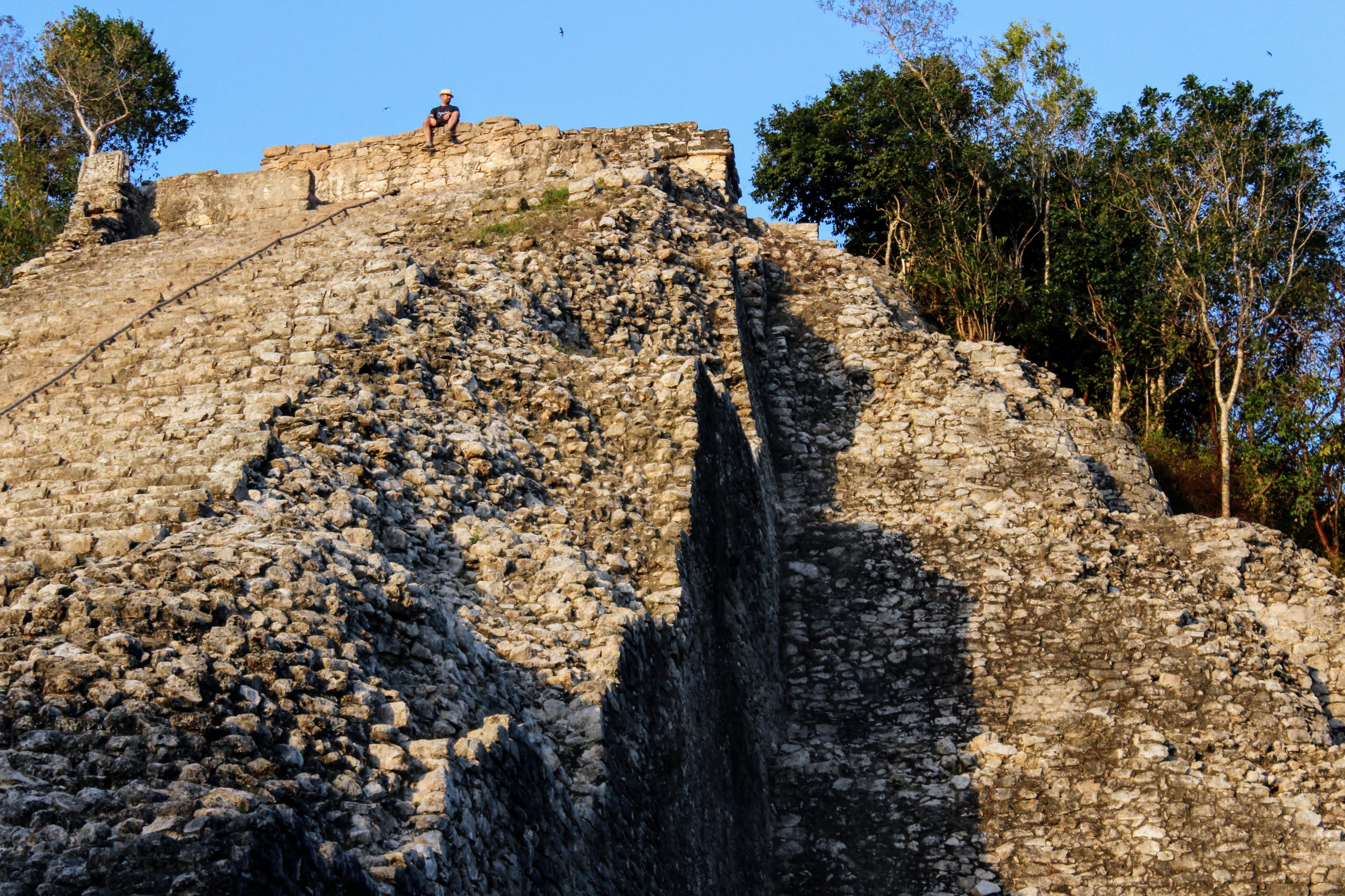 While I was busy keeping balance, Ayan was inspired to build his own stone structures. 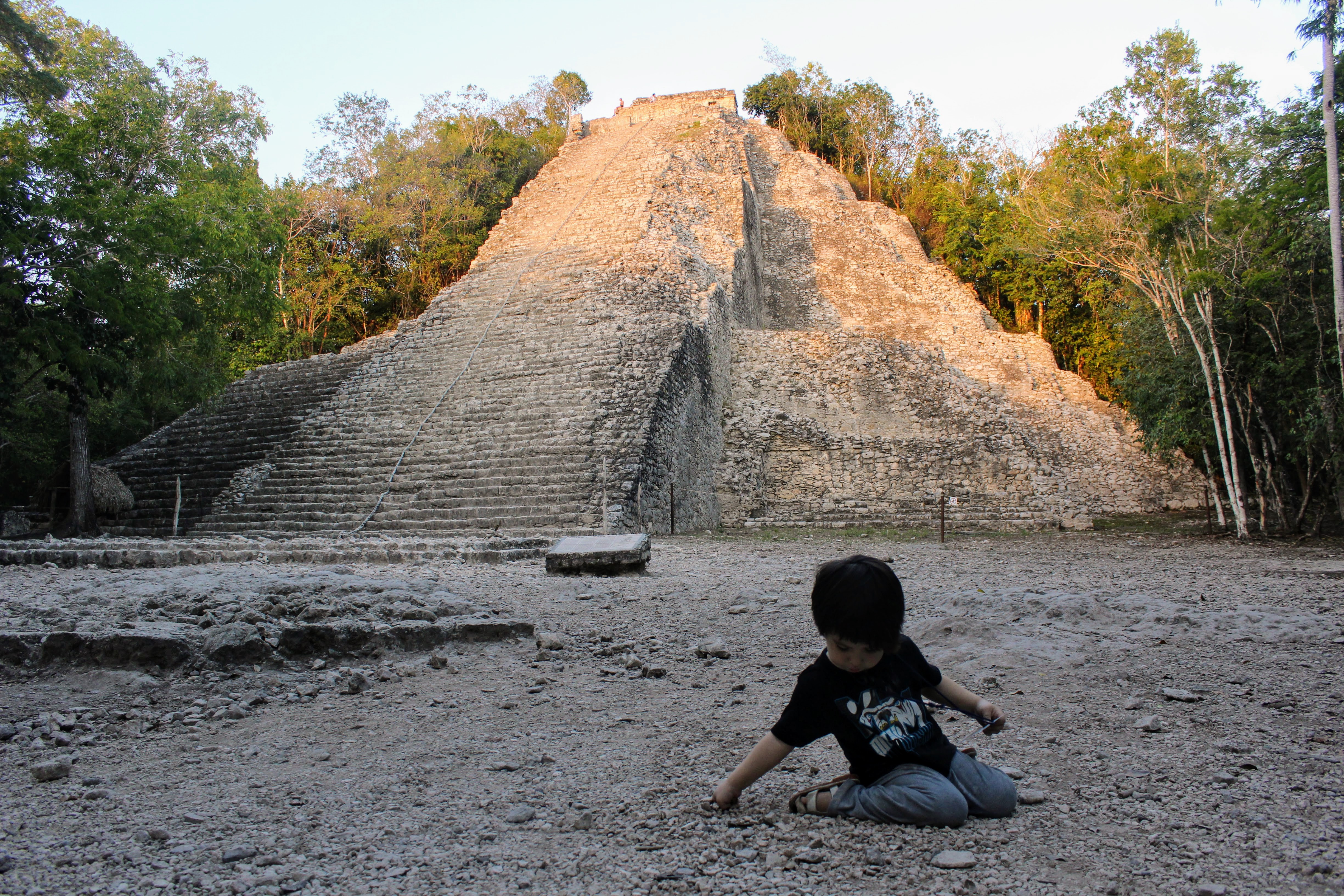 Continuing on foot, we came upon this rounded pyramidal structure. Ancient Mayans used it as astronomical observatory. 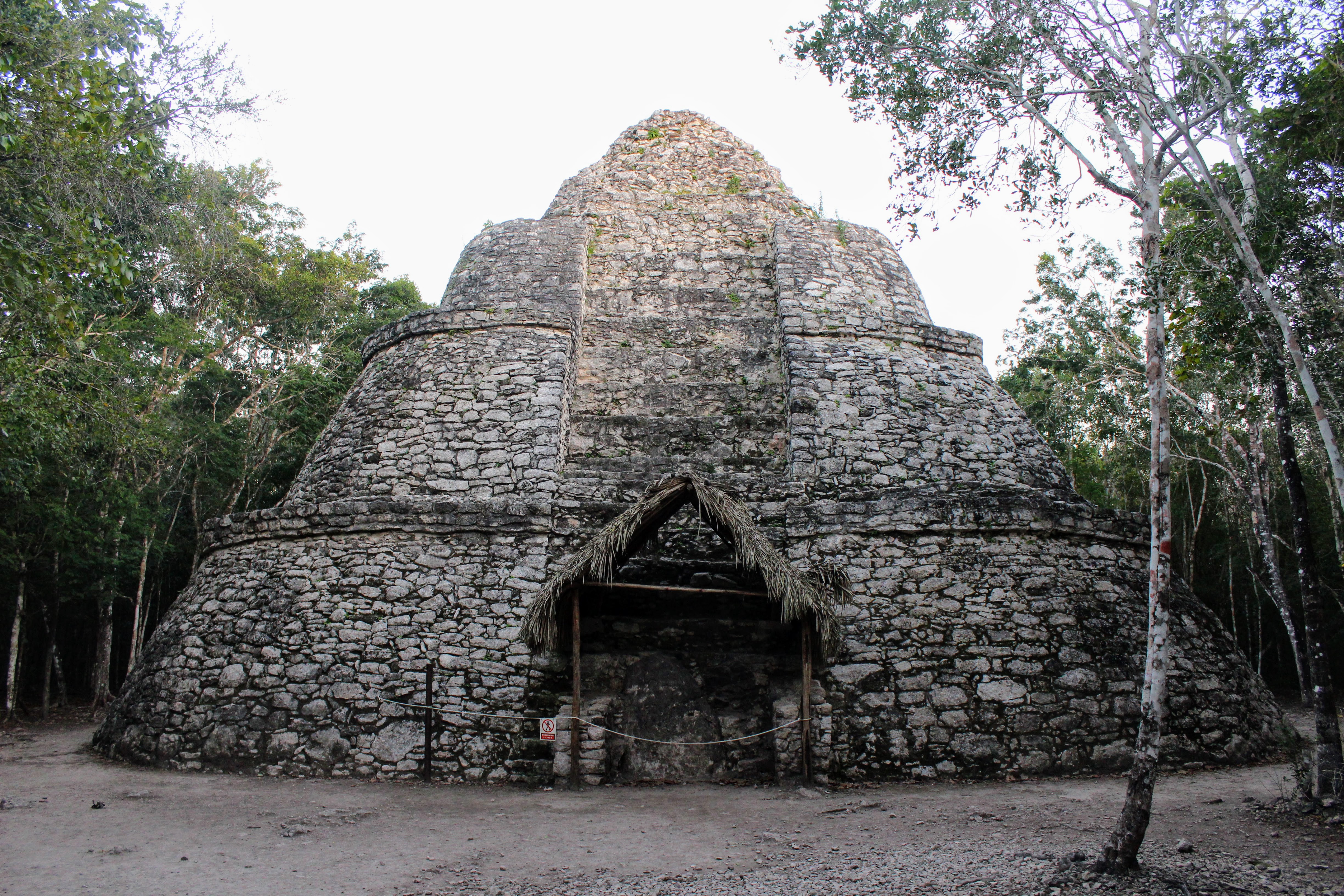 Climbing and running around the observatory, playing catch with us, Ayan was having fun. 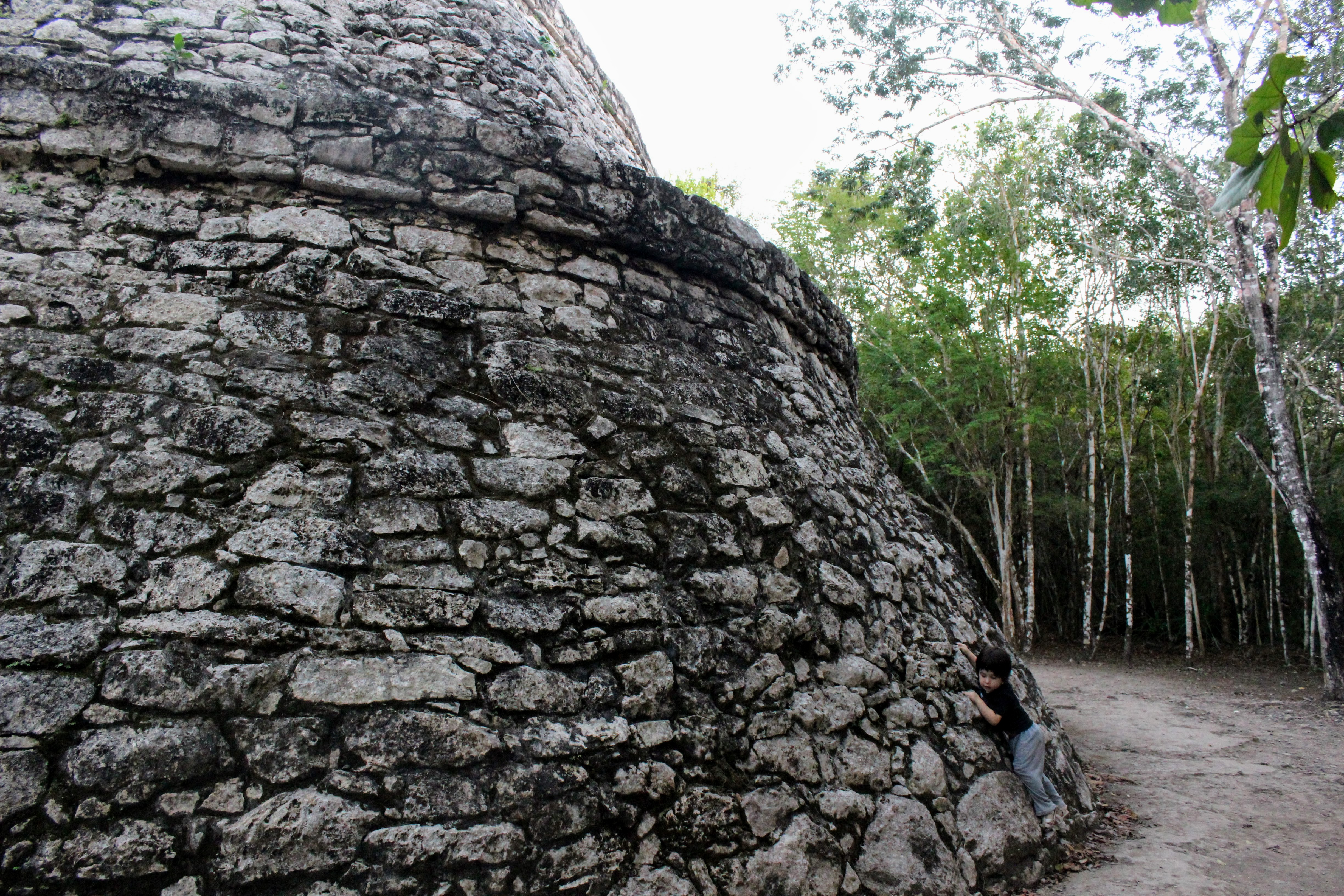 Sun was down when we were leaving the park. Loud sounds of gong lead us to a nearby restaurant where a demonstration of the traditional Mayan ball game (the one played in the ball court) was under way. If we needed a proof that putting the ball inside a ring using only hips is nearly impossible, the players provided it.

It was night-time when we finally reached Tulum.

A few day later, on our way back to Merida, we stopped again in Valladolid. While Ayan was playing in the park, I turned to the nearby Santa Lucia church, where people gathered for what seemed to be a religious procession. 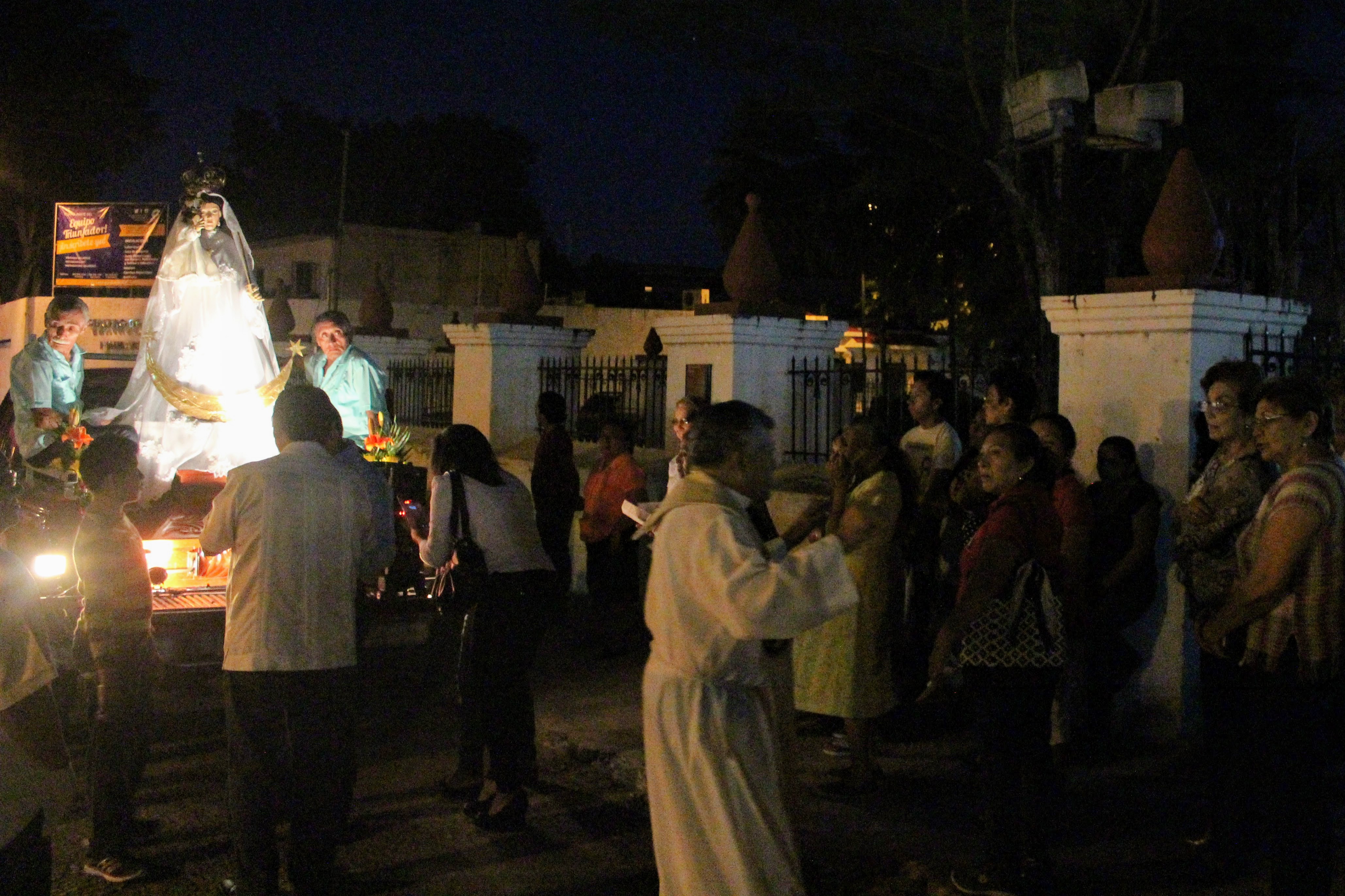 Turns out, we were in the middle of a two-week celebration for the Virgen of the Candelaria, venerated in Valladolid. The priest thanked all the people gathered, mostly women of Mayan descent, and gave the sign. 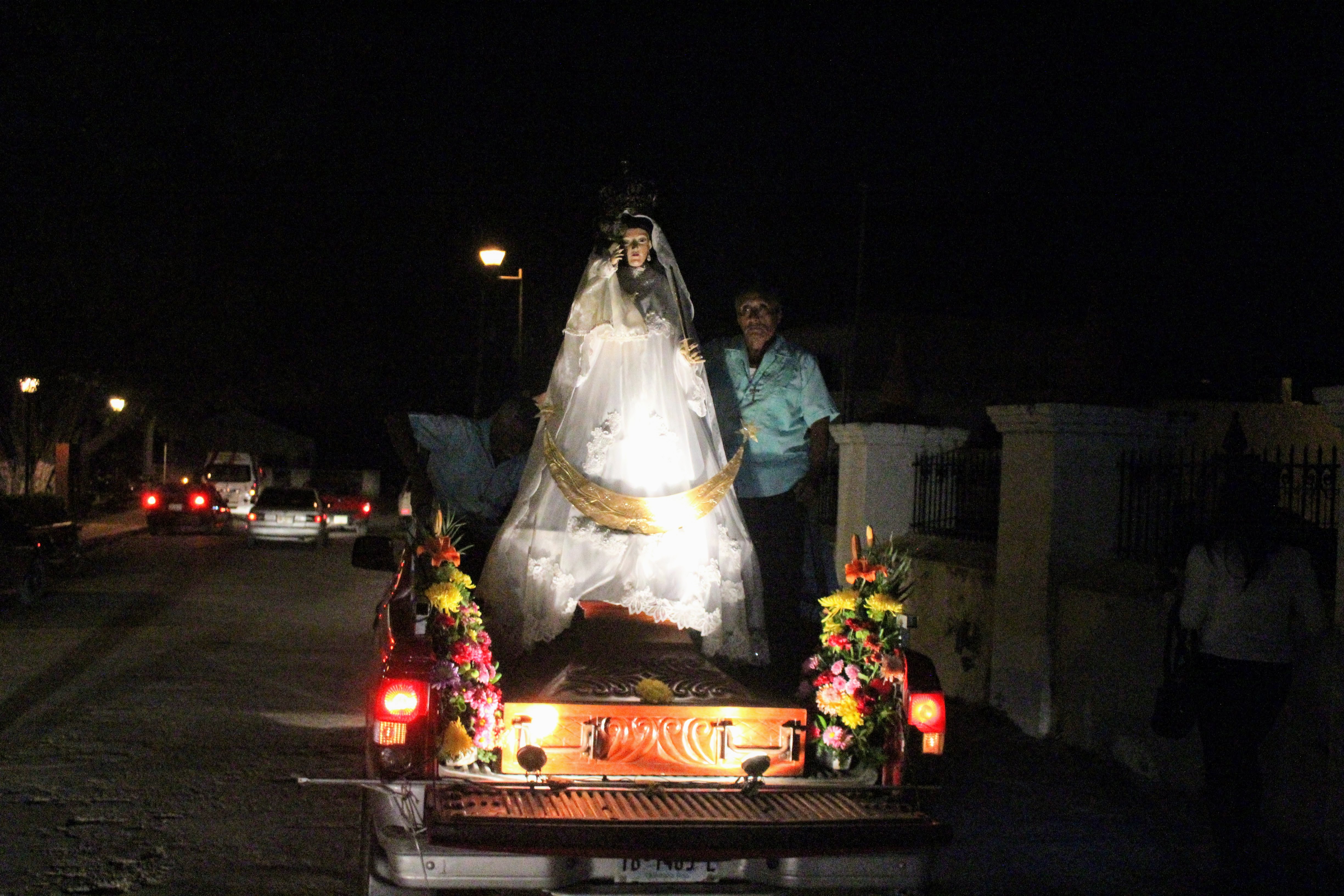 The car started moving, touring the streets of the town with the virgin guarded by two officials. 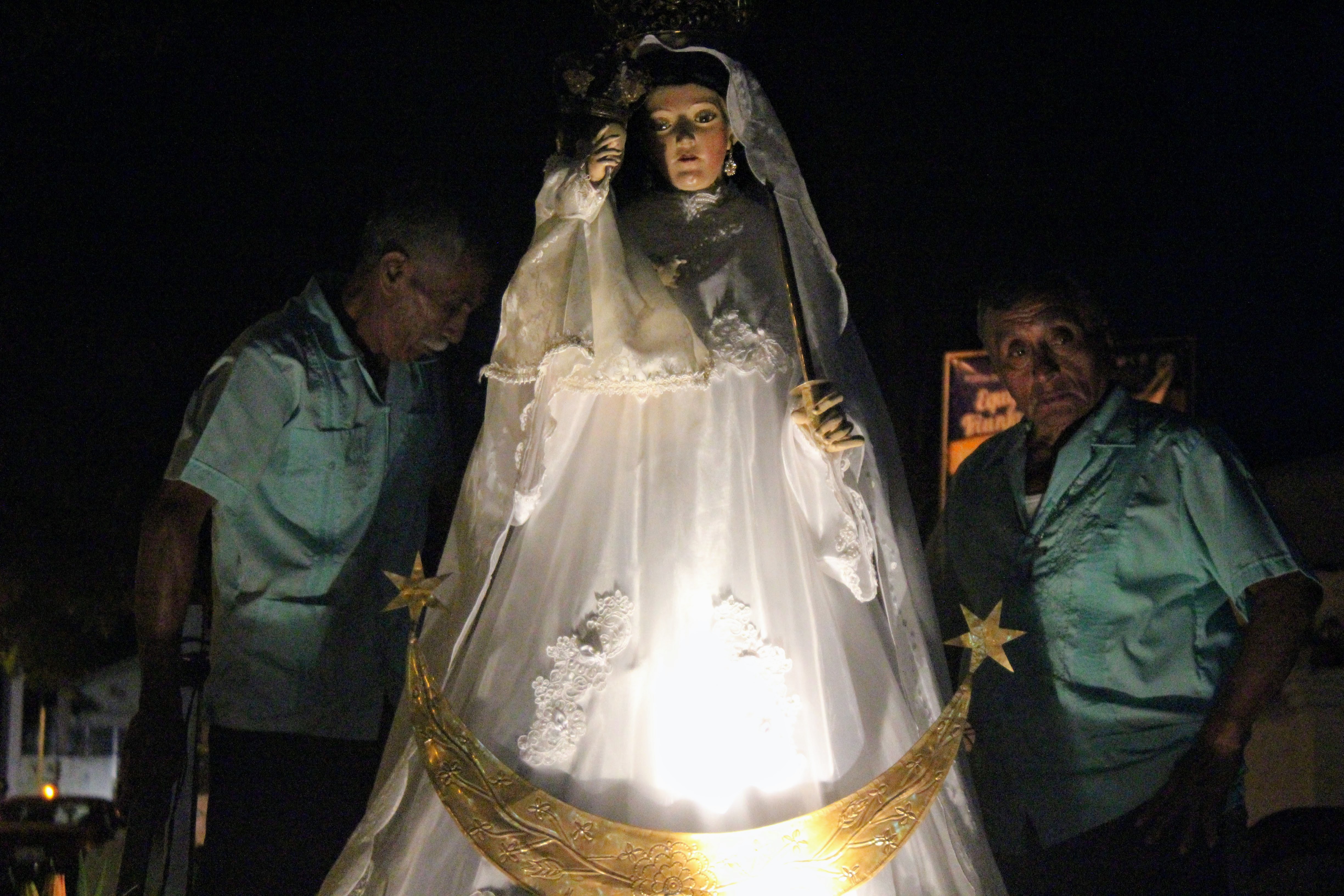 As we were returning to Merida, our weekend on the road was coming to an end. If there was one thing I learned, it’s that for the people of Yucatan, the ancient Mayan pyramids and cenotes hold key to their ancestor heritage, while the images of virgins in their churches channel their devotion. And despite everything, there was no contradiction.