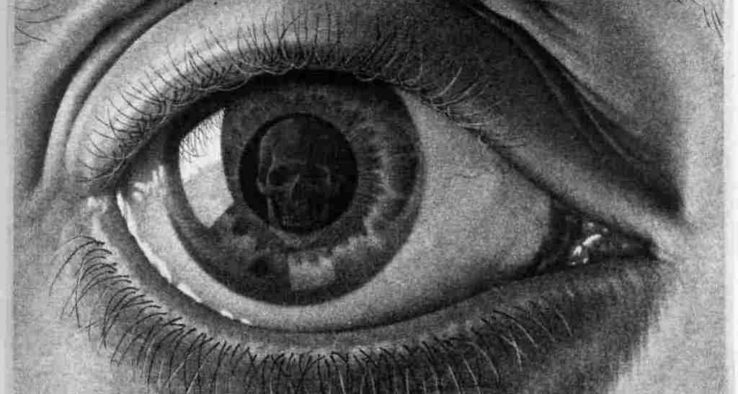 Semyon, a close relative of my family has passed away about a month ago. There was nothing surprising about it – the man has suffered from a terminal lung cancer for over an year. But when I heard the news, I still couldn’t help but feel a sense of shock.

Man’s death can never leave us indifferent. Death of unnamed and faceless thousands is grasped rationally, not emotionally. Death of a stranger, of who’s life and death we learn in the same sentence in the newspaper may stir some sadness, especially if the circumstances of his life and death were tragic. But death of man we knew about, whose life was real to us, whose bad habits and lousy temperament were inseparable from the world he lived in – such death is always shocking. It is shocking not because of the loss – it takes time to acknowledge it. It is shocking because we are suddenly reminded of the reality of death.

We don’t usually think or talk about death, at least not  seriously. Death is one of the last taboos of western society. But once in a while, when we are reminded of it’s impending reality, we may ask ourselves “is there a preferred way to go”?

A Painful Decay
The last year of Semyon’s life was difficult for him and his family. He suffered from unending coughing, excruciating  pain, difficulty to move. It was very hard for his wife and children – having to witness your husband’s, father’s consumption by a disease is a heart-breaking experience. But amidst the pain and the anguish, there were also moments of reflection and reconciliation. His son told us later that in the last months of his life he was occupied by thoughts about his mother. It was his wish to be buried next to her.

We are born crying, we pass away suffering. But sometimes the suffering is so long and hard, that death is wished for, waited for, to come and liberate. When old age or illness bring physical and mental degradation, loss of human dignity, severe personality changes, the resulting toll on the person and (even more so) on his family is almost unbearable.  That’s not the way we want to be remembered,  that’s not a way to die.

But a long and protracted battle with a debilitating disease, carried with dignity and courage, can be a source of inspiration. After all, if a dying person can be so noble, maybe I can show a little bit more responsibility in my life?

A Violent Vanishing
A long battle with death is painful for everybody involved. Does it mean that we should prefer a momentary, sudden death? It’s easy to argue that for the person dying, sudden, momentary death is preferable. Heart stroke in your sleep, and ten seconds later you are gone. But a more careful consideration undermines this view.

The family of the suddenly deceased is struck with shock and grief, and consolations like “at least he didn’t suffer” hardly make it any easier for them. Since nothing prepares them for the tragedy, the initial shock is magnified by the absurdity and unrealism of the situation. You hear friends saying “just yesterday we talked about going to cinema on the weekend…and now he is gone. How can it be?”

When the first shock is over, and grief sets over, it is made worse by feelings of guilt and regret. Never having the chance to express love one last time, to say goodbye, to ask for forgiveness, the loved ones of the deceased fixate on their last bitter exchange, their ungrateful behavior, their indifferent selfishness. It’s much harder to come to terms with the tragedy, when sorrow is reinforced with guilt

But what about the person itself? Doesn’t he deserve a chance to say goodbye, to say how sorry he is? Forever denied the opportunity for retrospect, for reconciliation, for one last life struggle and achievement – the acceptance of approaching death, the story of his life is never finished – it’s abruptly terminated. If ghosts ever existed, these must be the ghosts of the suddenly deceased.

A Peaceful Goodbye
A long battle with the death is too painful. Sudden, momentary death is too absurd. Is there a “better” alternative? This is how I picture a “perfect death”:

One morning you get a phone call from your physician: turns out you are terminally ill, and in three months time it will be over. He ensures you that there is absolutely no hope (saving you wasting time on futile fight), and that the medication you’ll get is very effective in managing pain, so that your suffering will be minimal.

It takes you a couple of weeks for the news to sink in. Gradually, self-pity makes place for a sense of urgency: there are some things you need to do before you are ready to check in: loose ends to be tied, words to be said, amends to be made.

When the times comes, you are ready. Regrets for unfulfilled plans and dreams are outweighed by a sense of completion. Achieving a closure in your life, you are almost peaceful. You are afraid, but you are not in panic. Your last thought amuses you: “I hope my atheism won’t be judged too harshly when I face Him”.

Wishing us a long, fulfilling life and a dignified death.