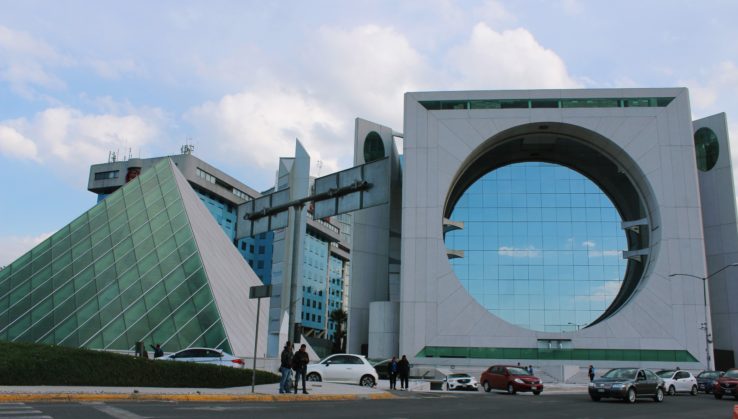 Mexico City offers urban explorers an astonishing assortment of Aztec temples, cathedrals, Marxist murals and some of the best museums on the continent. So it’s easy to miss that the city also boasts some great examples of modern architecture – you just have to know where to look. So how about a quick tour?

La Cineteca Nacional is an institution dedicated to the preservation, exhibition and promotion of cinema in Mexico. Its new building was designed by the architect Michel Rojkind. We stumbled on it by accident, while strolling around Coyoacán, the southern borough of the city. Most tourists come here to visit Frida Kahlo museum, but Cineteca’s unique futuristic look is certainly worth a detour. 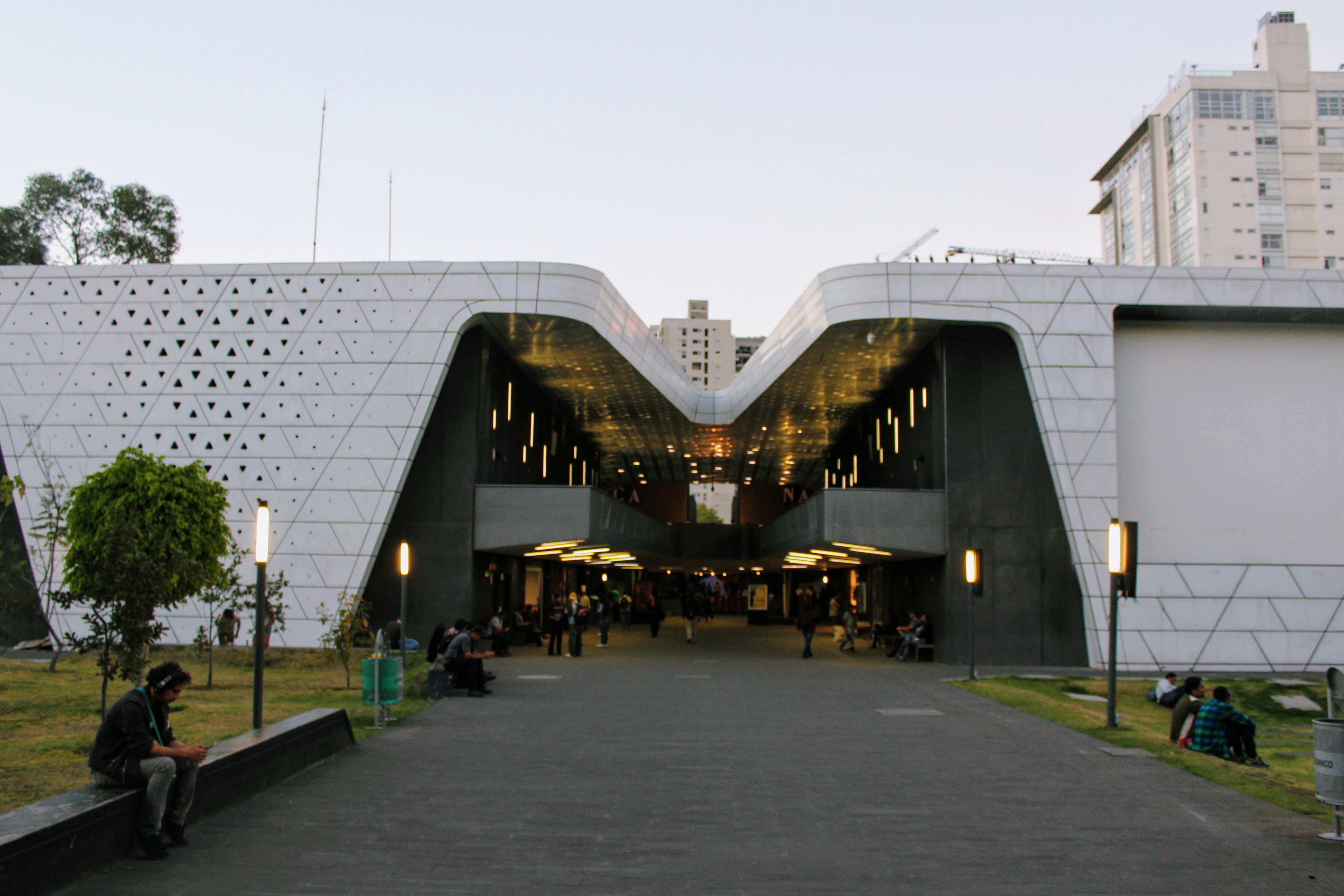 The structure’s open shade aluminum canopy roofing is what makes this public space a phenomenal showpiece. The triangular shapes cut on a diagonal into layers of aluminum, steel and glass allude to the roll film, that quintessential attribute of cinema. 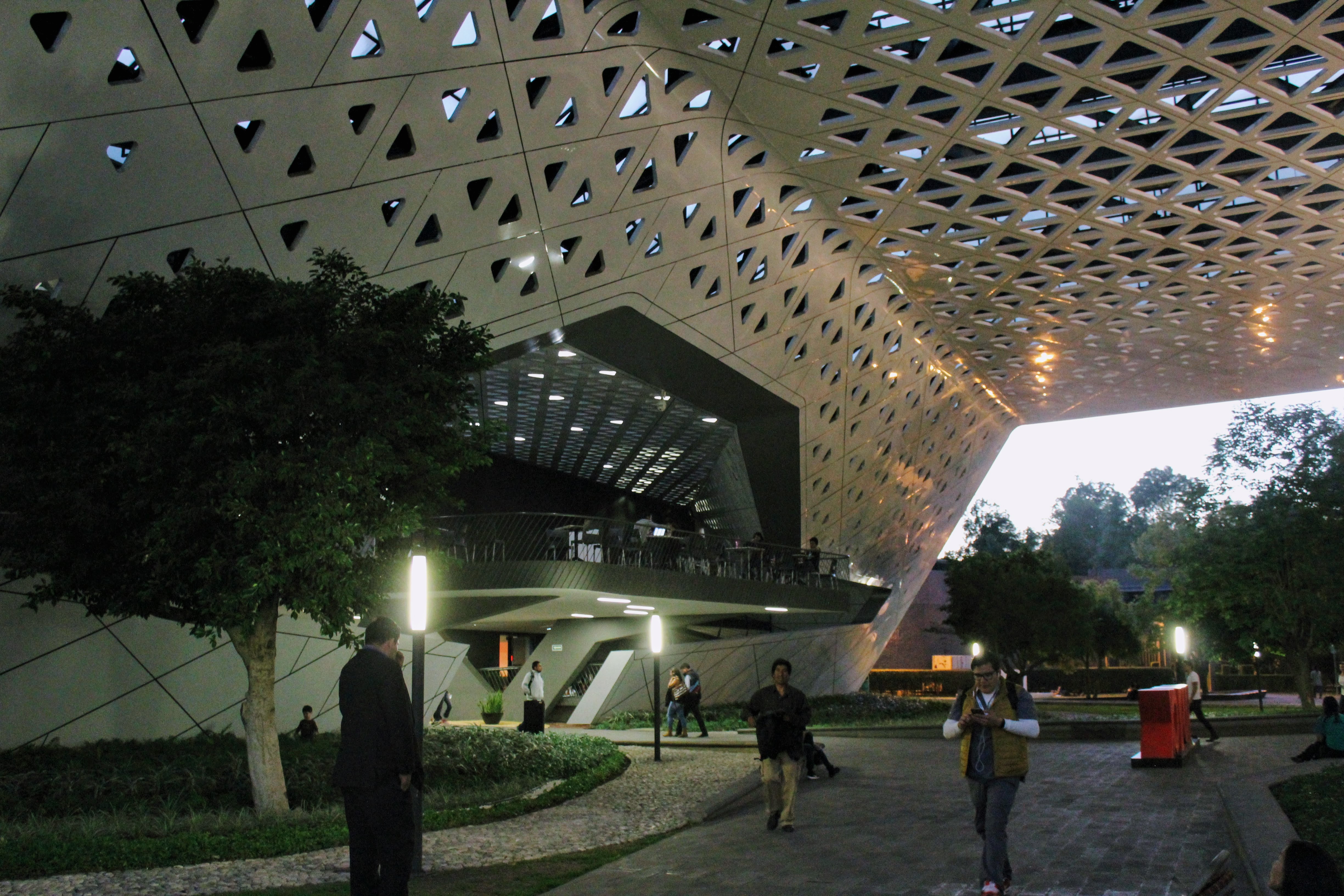 But to me, the structure bears more than a passing resemblance to the underbelly of Starship Enterprise, with the triangles of light being the portholes of the spacecraft.

At the time of our visit, an exposition of Kubrick works was showing in Cineteca. 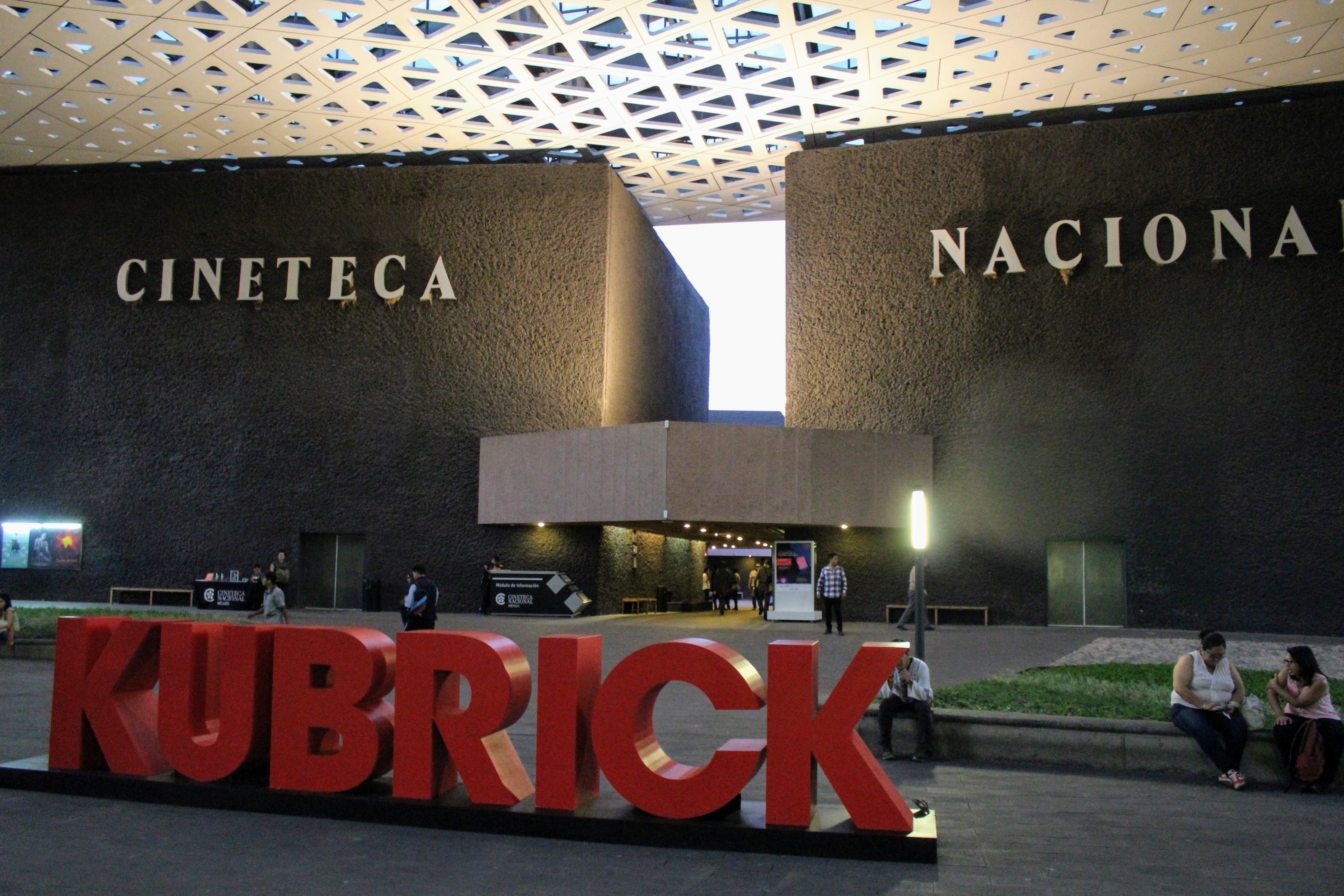 The Calakmul building in Santa Fe, the business center of Mexico City, is also known as La Lavadora (the washing machine). It’s easy to see why.

Built in 1997, it’s the work of Mexican architect Agustín Hernández. Its name alludes to the ancient Mayan city of Calakmul in the state of Campeche. In Mayan, Calakmul means “Two Adjacent Mounds”, referring to the two great structures that dominate the jungle.

The modern Calakmul houses the Dutch embassy, so taking photos is frowned upon by the guards at the entrance. But that just means you need to step back and catch the structure from a distance.

Just 100 meters from the Calakmul building, Iglesia San Jose Maria reimagines how a church can look in the 21st century. 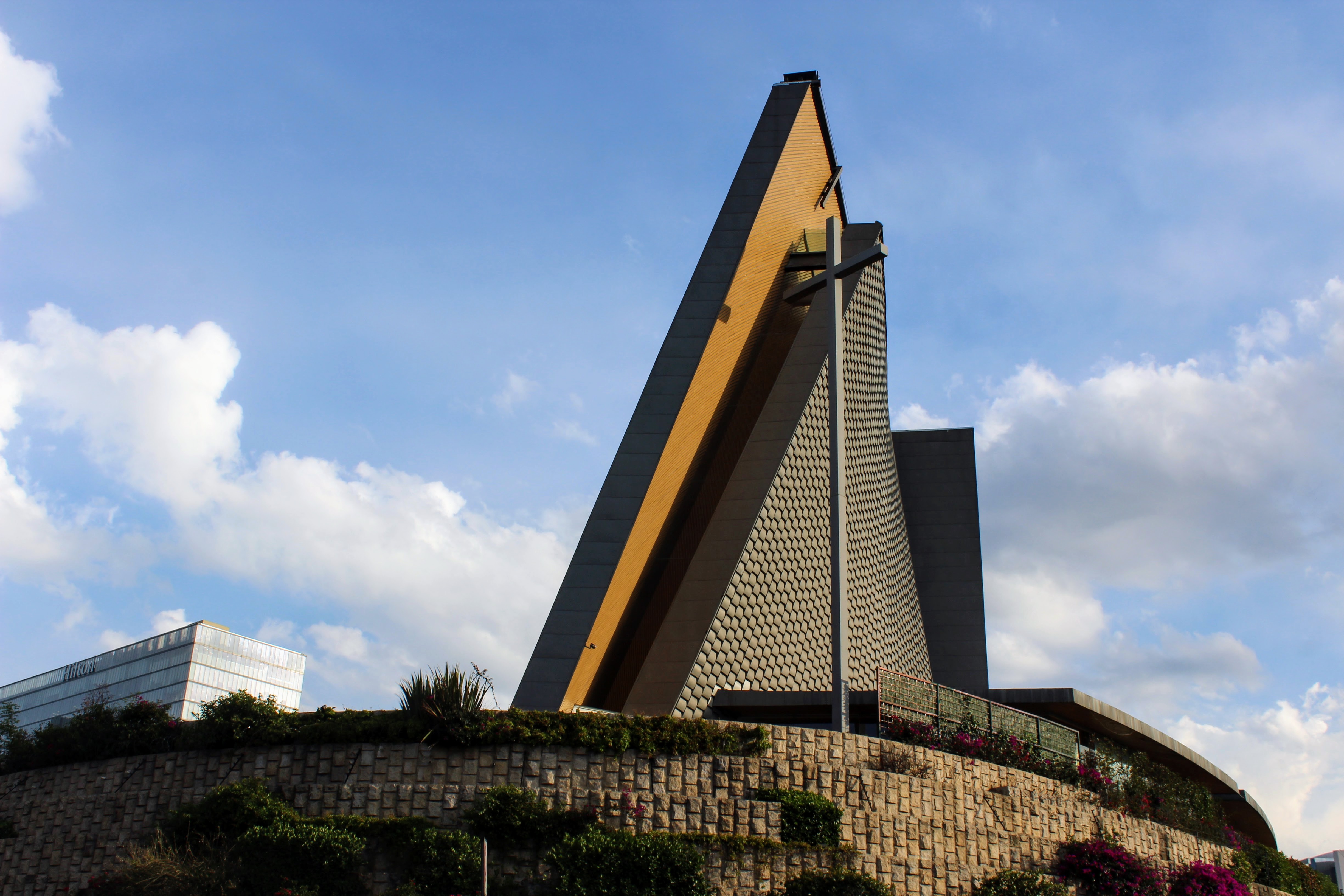 With lots of natural light and internal decoration made entirely from wood, the feeling inside is one of lightness of being. Not something you would normally associate with Catholicism.

Museo Soumaya is the most visited art museum in Mexico. It has over 66,000 works from 30 centuries of art including an extensive repertoire of works by European old masters and masters of modern art such as Auguste Rodin and Salvador Dalí. The museum is named after Soumaya Domit, the wife of the founder of the museum, the Mexican-Lebanese billionaire Carlos Slim. 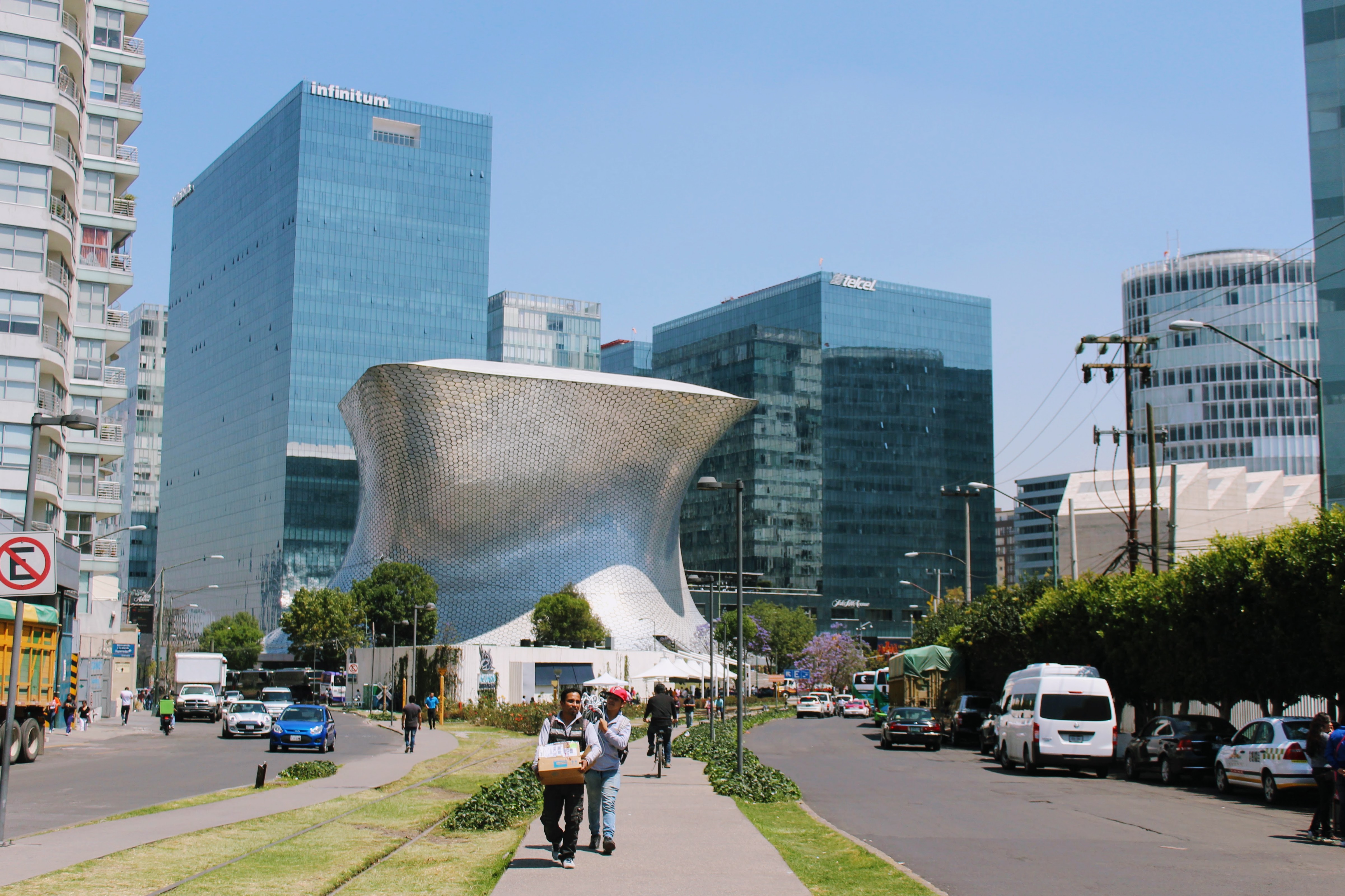 Its new building in Nuevo Polanco, unveiled in 2011, is hard to ignore. Designed by the Mexican architect Fernando Romero (who is married to a daughter of Carlos Slim), it’s six-story high, covered by 16,000 hexagonal aluminum tiles. 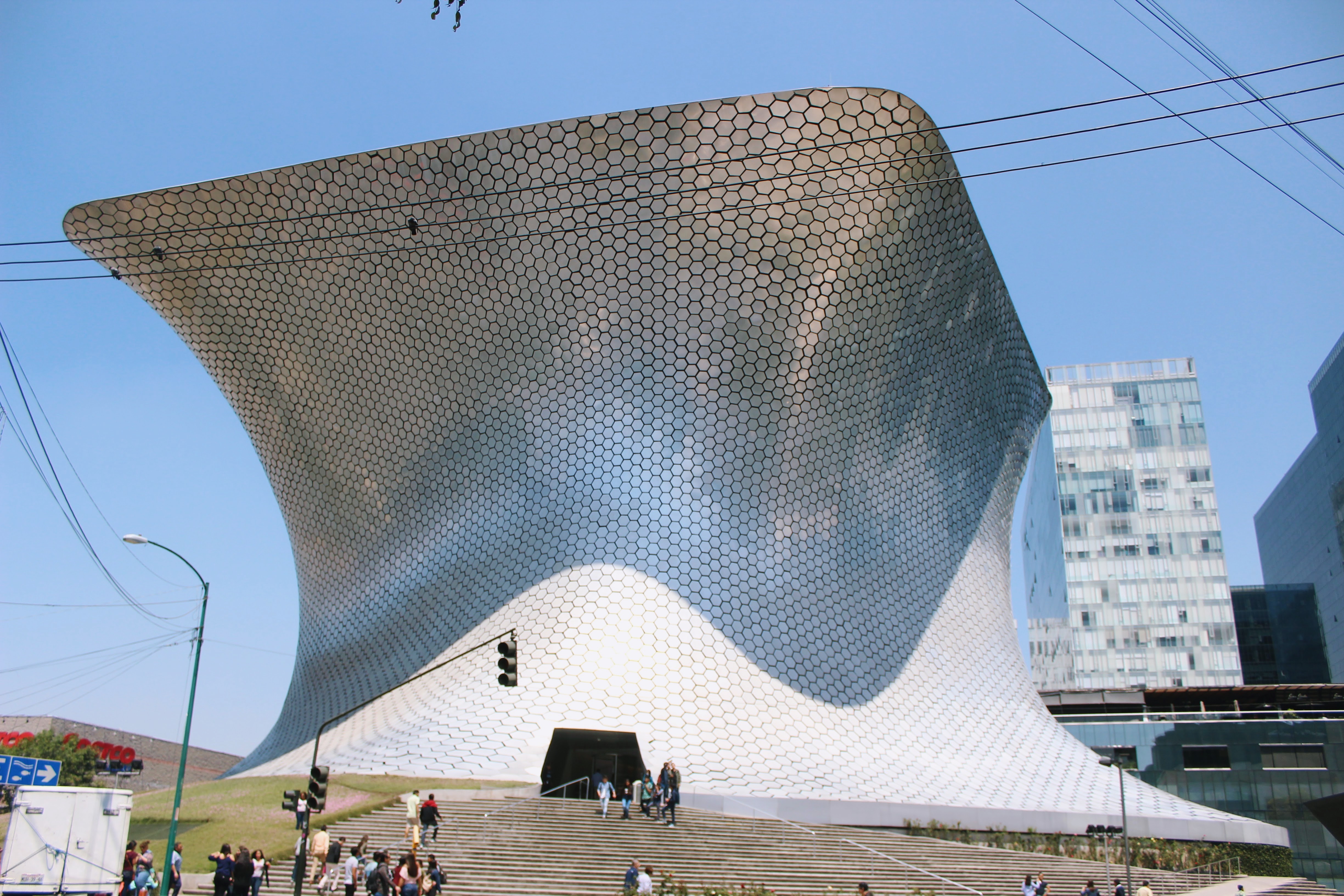 The museum has a narrow entrance that opens into a large white gallery. 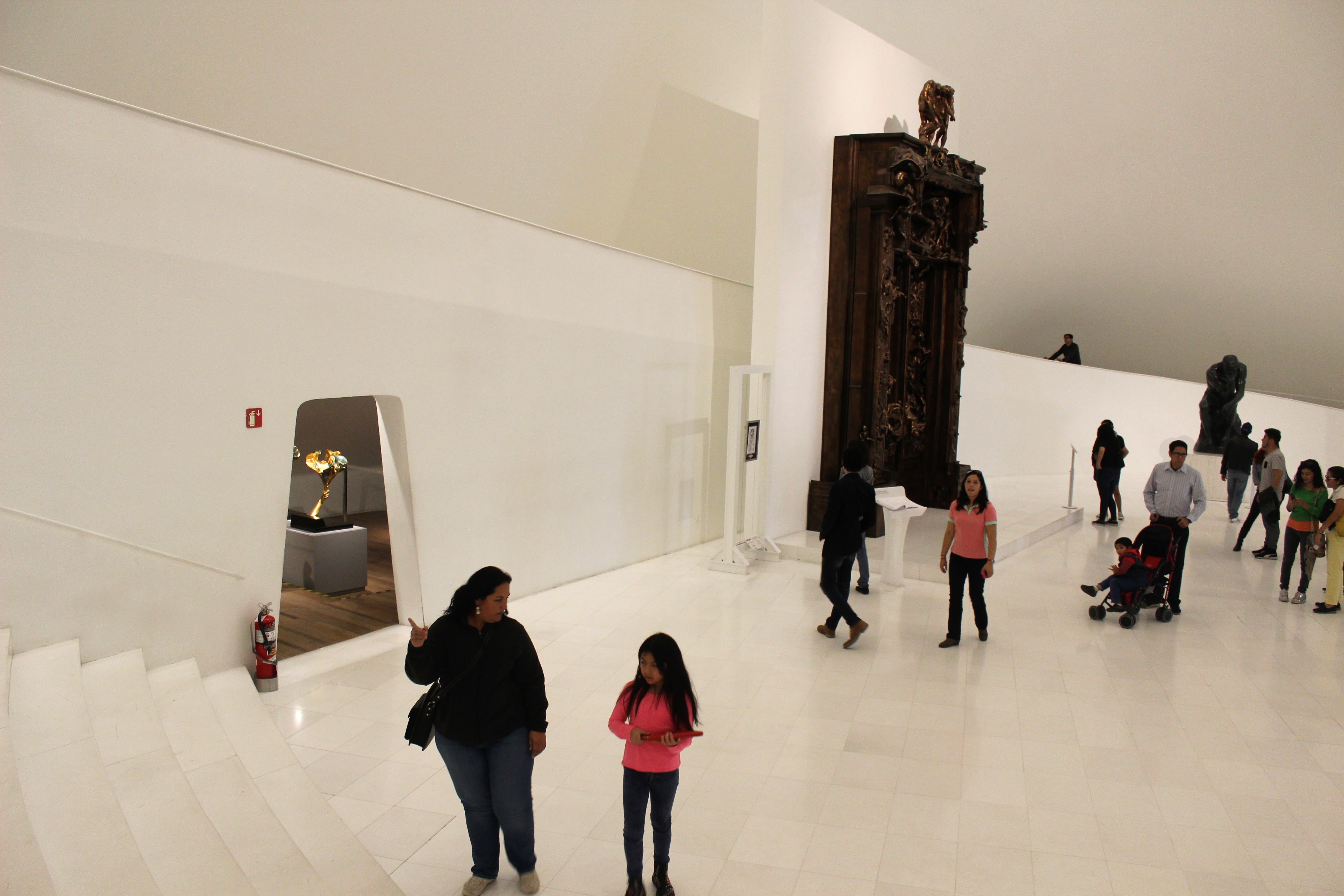 The top floor of the building is opened so that it is illuminated by sunlight during the daytime. 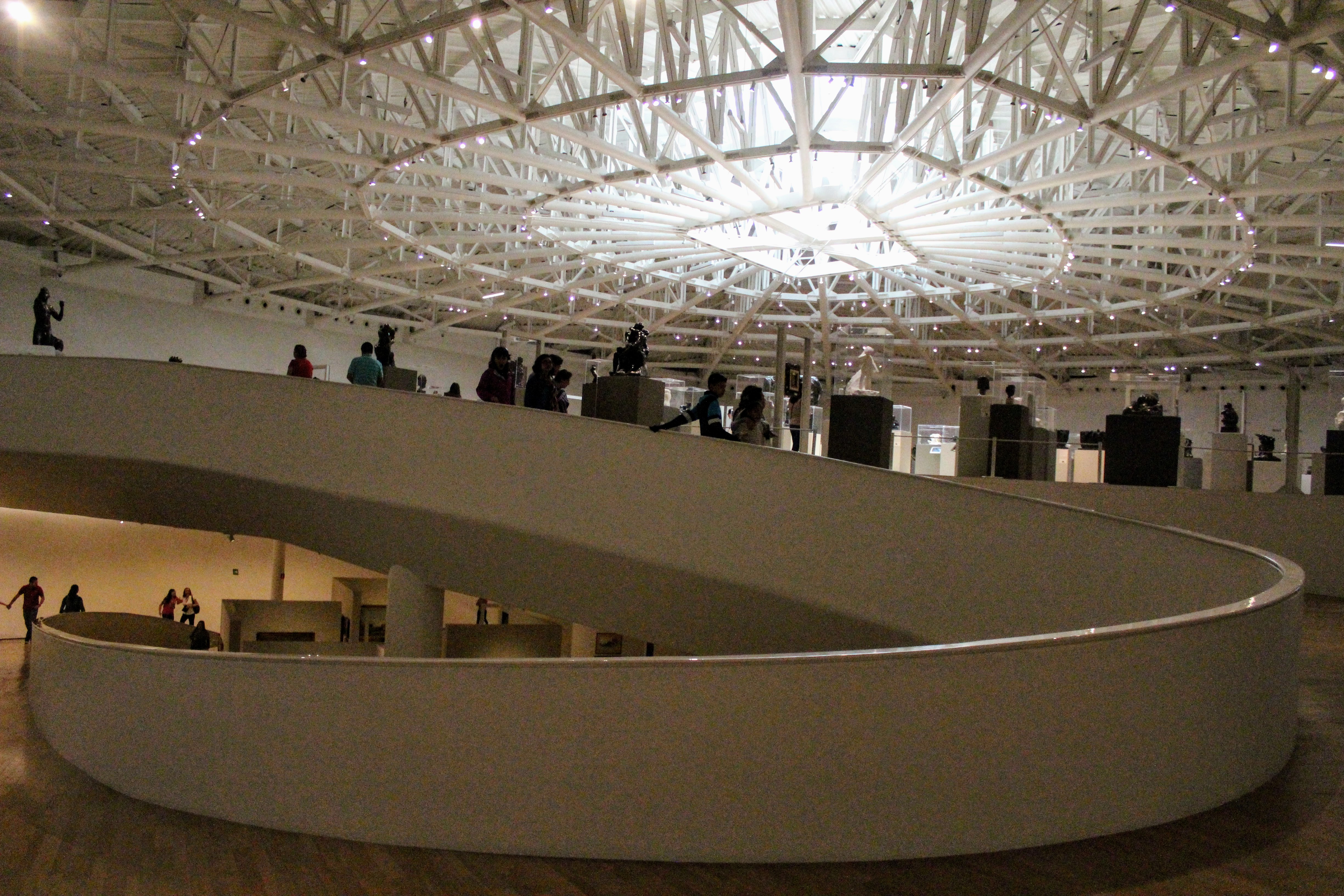 The former residence of architect Luis Barragán in Miguel Hidalgo district of Mexico City is a great example of modern design. But you wouldn’t know that if you were just passing by the house on the street.

In 2004, it was named a World Heritage Site by UNESCO, being one of the most influential and representative examples of modern Mexican architecture. Due the popularity of the museum, visits have to be registered at least a week in advance.

Тhe residence was built in 1948 after the Second World War. It reflects Barragán’s design style during this period and remained his residence until his death in 1988. 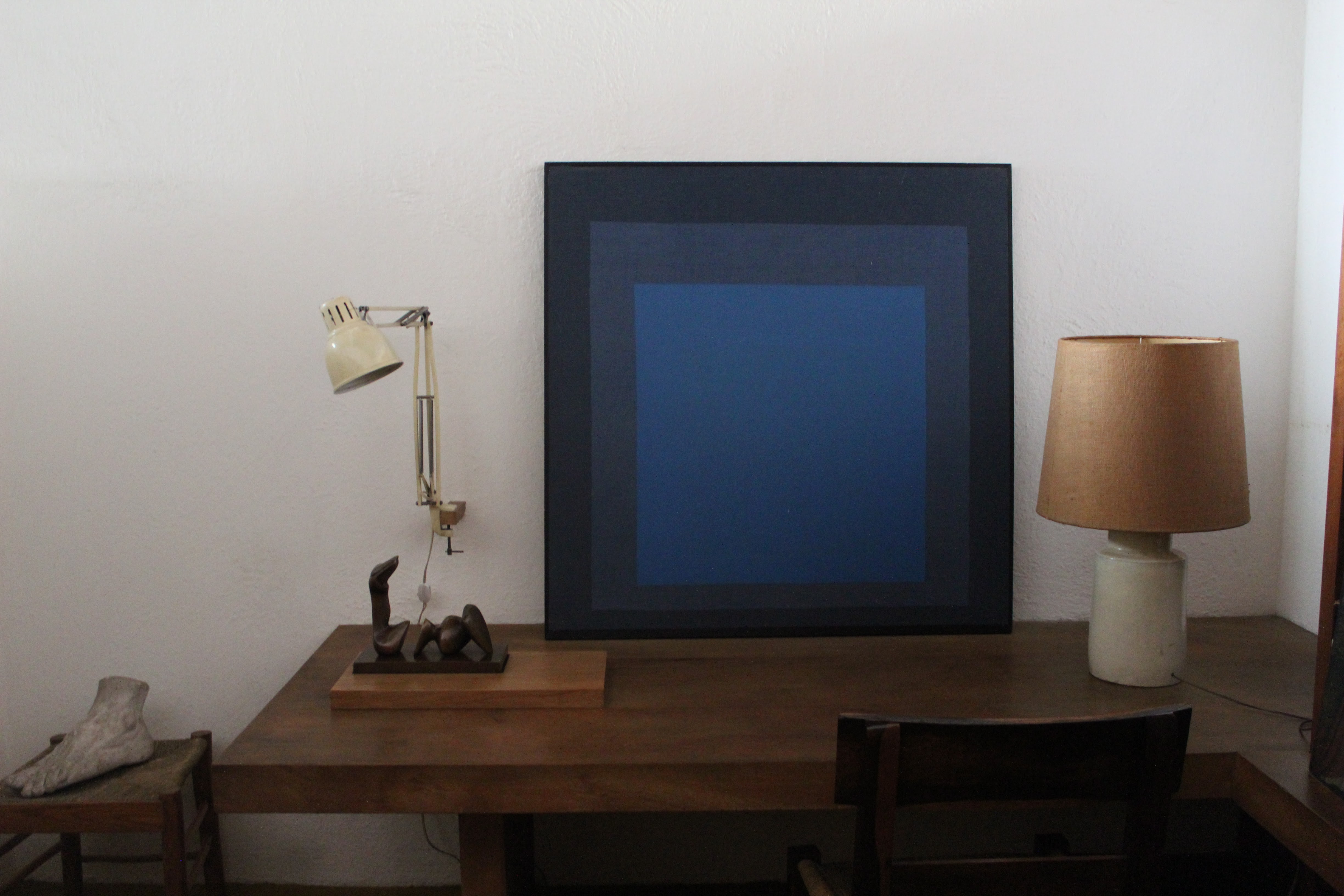 The upper floor is a more private space with thick wood shutters for the windows. The upper floor houses the master bedroom with dressing room, a guest room and an “afternoon room”.

Back on the ground floor, this small room is used by the house staff. Barragan’s personal helper still lives in the house. 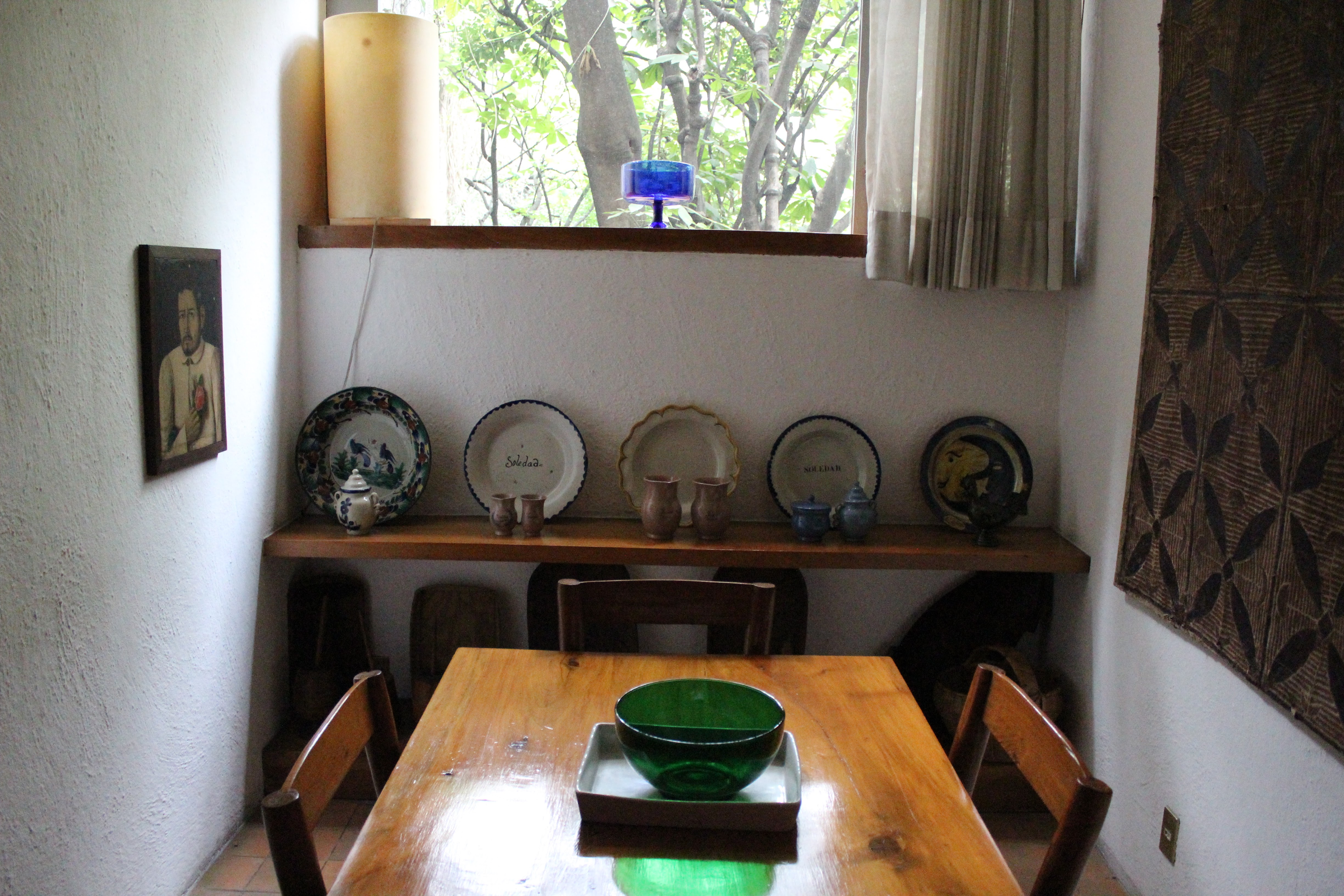 Patio de las ollas (Patio of the Pots), is a small open space which provides light and greenery in the center of the structure.

If you find yourself near Casa Luis Barragán without making an appointment, don’t despair – you can still visit Luis Barragan’s archive, housed in the same building. You won’t have access to the internal spaces of the house, but the entrance to the archive is free and you’ll still get some idea of Barragán style.

A curvy passageway leads from the garden to the archive, which houses documents, exhibitions and a gift shop. 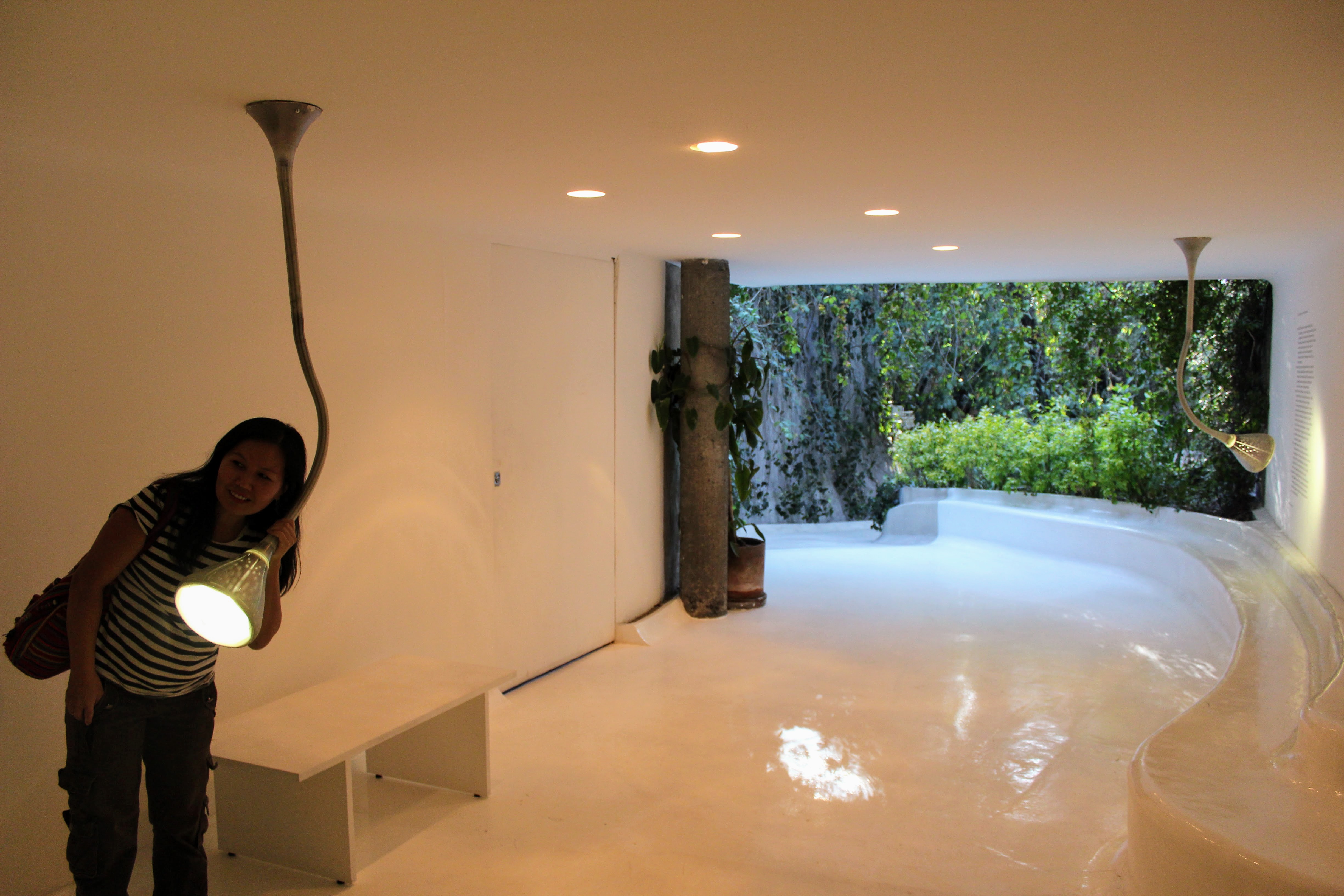 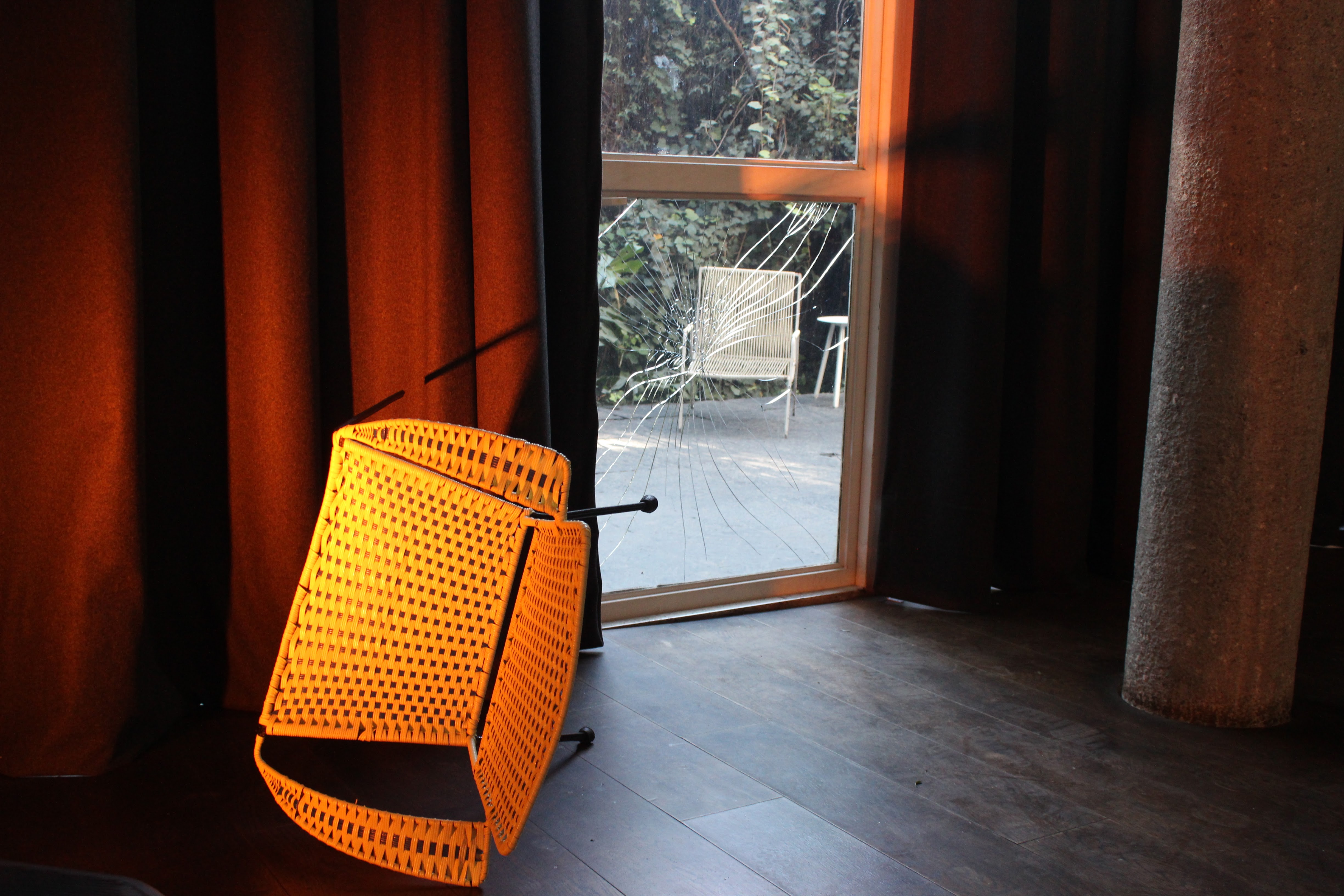 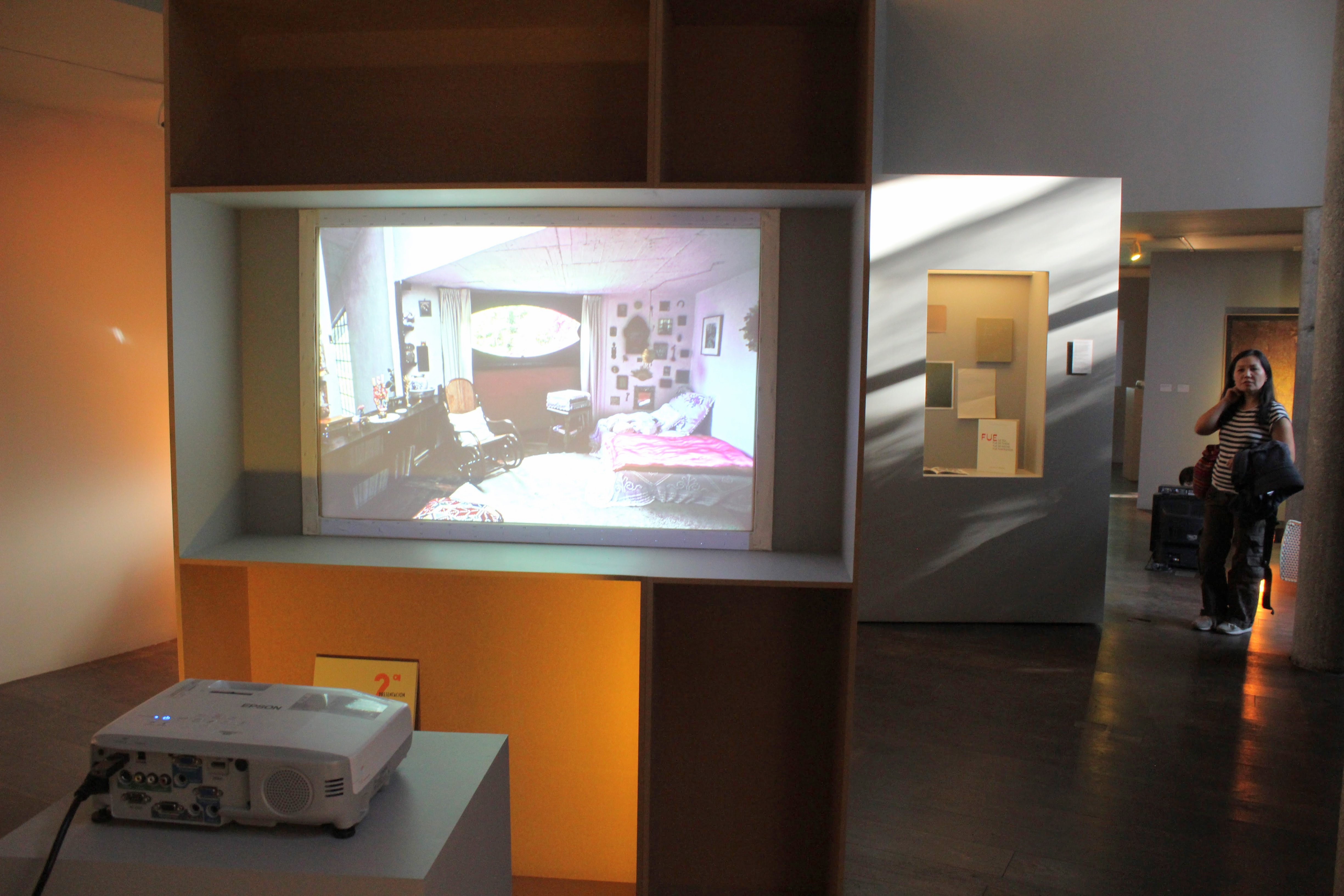 If you love modern architecture, Mexico City’s synthesis of indigenous elements and modernist philosophies will not disappoint.