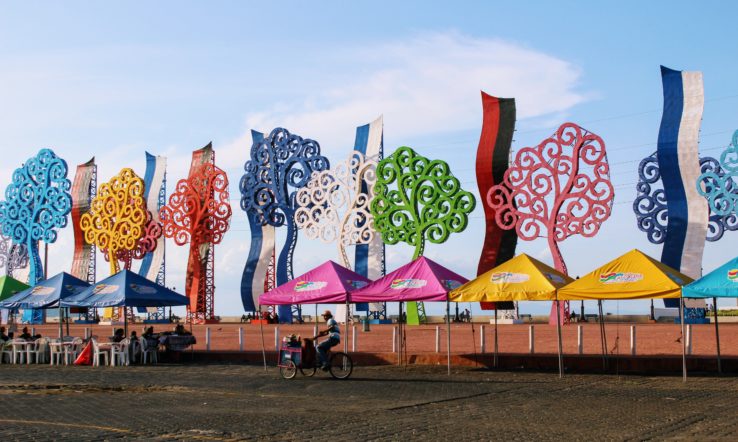 Nicaragua travel guides usually recommend visitors to skip the capital Managua and head straight to the picture-perfect Granada. After reading how bad Managua was, more than anything, it got me curious. So after a month in Nicaragua, and just before leaving the country, we spent our last day in the capital, exploring its revolutionary landmarks, empty squares and peculiar cathedrals. A city without a center (the downtown was erased in the 1972 earthquake), Managua is not an attractive or orderly urbanity. But what it lacks in looks, it makes up in sheer quirkiness.

Arriving to Managua on late evening from Granada, we stayed in Managua Backpackers Inn. Located in the wealthiest neighborhood in the city, it’s close to all the 5-star hotels. Passing by the InterContinental and the Hilton the next morning, I could almost mistake it for Miami.

But as we walked north along the main road, the mirage quickly gave away to more typical views of Nicaragua.

After several unsuccessful attempts to stop a taxi, we continued on foot, navigating the stroller along the broken, disfigured sidewalk.

Soon, Managua’s new cathedral was on our right.

The cathedral was built in 1991 to serve as a replacement for the Old Cathedral of Managua, which was damaged beyond repair in the 1972 earthquake.

It’s easy to see why the new cathedral has generated a lot of controversy. With its roof adorned with multiple cupolas, the locals refer to it as La Chichona (chicha is a Spanish slang for “breasts”).

Inside, the cupolas grant the main hall a striking modernist look, letting in a plethora or light.

Continuing along Paseo Rubén Darío, we were sweating when the road finally brought us to fork around a circular green space. Surrounded by vegetation and fences, it turned out to be a lagoon.

A lagoon of volcanic origin, it formed over 10,000 years ago. On its far side loomed the unmistakable silhouette of Sandino, the national hero whose name the Sandinistas took.

Circling the lagoon on the left, passing another hotel and climbing up the hill, we soon arrived at the Sandina memorial.

Thoughtfully, a statue of Jesus was also provided with a shade.

Like Waldo, the silhouette of Sandino always pops-up unexpectedly.

Reaching the top of the hill, a view of the Tiscapa lagoon opens up. Like most volcanic lakes, it’s almost a perfect circle.

Looking in the opposite direction, a nice view of the city is revealed. It’s probably the most flattering angle to view Managua from.

From here we’ll continue all the way to the lake. Descending from the hill, we passed the Plaza Inter shopping mall and a beautiful, empty square covered with a mosaic and for some reason, surrounded by columns.

The nearby Hugo Chavez traffic circle celebrates the friendship of the Sandinista government of Daniel Ortega with Venezuela. Up until its economy collapsed, Venezuela shipped US$3.7 billion in oil donations to Nicaragua between 2007 and 2016.

The cheap oil fueled impressive growth in Nicaragua, with Ortega’s government spending 40% of it on ambitious social welfare programs. The other 60% went to fill the pockets of Ortega’s family.

Monument to the Martyrs of Latin America features some familiar heroes of Latin-American mythology, such as Simon Bolivar, Che Guevara and Fidel Castro as well as Hugo Chavez.

The highest building in Nicaragua, the former headquarters of Bank of America now houses a government bureaucracy.

Passing the government complex, we dove in a large children park. Ayan was very happy with this unexpected development.

Revolution Square is the central square of the capital. When we got there, it was empty and desolate.

The Old Cathedral of Managua survived the 1931 earthquake, but was heavily damaged during the 1972 earthquake, which eventually led to the construction of the new cathedral.

In the adjacent Central Park, revolutionary flags and monuments justify the square’s name

Before the 1972 earthquake, Temple of the Music used to be surrounded with small ponds of water where turtles and alligators amused the crowds.

When we got back to the square, it was no longer was empty. What looked like a group of medical clowns has gathered for an open-air seminar.

A man in a costume of princess was smoking a cigarette, puffing smoke from a little hole in the dress. Just another perfectly-normal scene from Managua’s central square.

The National Palace is one of Managua’s oldest buildings, undamaged by the earthquake. For more than 50 years, it housed the Congress. Today, the National Museum is located here.

The museum contains a collection of pre-Columbian statues and ceramics as well as paintings by modern Nicaraguan artists.

How happy, fresh is the morning!
The air grabs me by the nose:
dogs bark, a boy screams
and a chubby, pretty girl,
grinds corn on a stone

A mural on the far side of the museum evokes the destruction inflicted by Managua’s two deadly earthquakes.

The second floor of the museum was closed off to the public, so I couldn’t examine the futurist-looking mural up-close.

On our way to the promenade, we passed several street food vendors. If there is anything that unites the American continent, it’s the ubiquitous devotion to corn snacks.

To feed a suddenly-hungry child, we stopped for a quesadilla.

A line of colorful metallic trees decorate the promenade. A city beautification project by Ortega’s wife and the Vice President Rosario Murillo, 140 of those Trees of Life, were installed throughout the city.

In April 2018, months after our visit, a peaceful student demonstration was gunned down by Ortega forces, inflaming the deadliest civil conflict since the end of the Nicaraguan Revolution. As a rebuke to the government and Murillo specifically, demonstrators toppled, and in some cases set on fire, a number of the Trees.

Right on the shore of Lake Nicaragua, another testament to government’s allegiance with Venezuela: Simon Bolivar on a horse, and a flag of Venezuela flying next to the one of Nicaragua.

A strange abandoned structure looks out from the water. When I asked locals what it was, I was told it used to be a fountain.

Whatever it was, since then it has been appropriated by birds.

We spent that afternoon on the promenade, surrounded by locals enjoying the company of their partners, children, friends, their pure joy rubbing off on us.

Further along the shore, the Xolotlán promenade contains models of Managua’s downtown buildings that were destroyed in the 1972 earthquake

The day was winding down when we caught a taxi to return to our hostel. Passing the Monument to the Unknown Soldier, I managed to snap a photo, the last memory of the city. Nothing says anti-imperialistic, revolutionary vigor as a man holding a Kalashnikov.

Despite its dubious touristic reputation, Managua is filled with curious attractions, even if those work counter to their intended impact. To anyone who is attracted by sights and artifacts that attest to country’s turbulent history rather than idealized version of the past, Managua is a must-see.