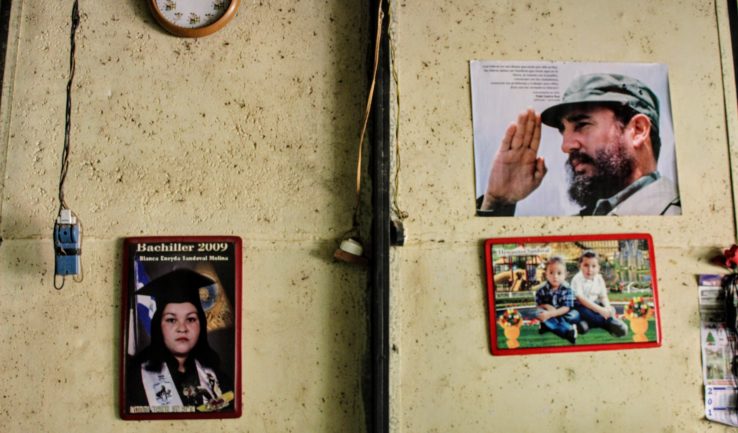 After spending a day exploring Matagalpa, we wanted to get out of the city to see the country side of the Nicaraguan highlands. In San Ramón, a small municipality 12 kilometers from Matagalpa, a local agricultural cooperative UCA organizes community-based tours to nearby villages. That’s where we headed for the day.

A 15 minute taxi ride brought us to San Ramon.

A town of 2700 inhabitants, it’s surrounded with mountains.

The taxi left us in the main bus stop, where we waited for our guide.

After meeting the guide, we took another taxi that took us to the nearby community of La Reina. A short walk brought us to a small house where we were to have lunch with a local family.

Blanca, a young woman welcomed us inside.

While he was transfixed by cartoons, Blanca’s mother showered Ayan with kisses.

Outside we met Blanca’s two sons.

Like many other children we’ve seen in Nicaragua, Ederson and Jihuvert were constantly munching on snacks. After years of food insecurity during the civil war, Nicaragua faces increasing levels of overweight adults and children. Economic growth and the integration of the region into international markets have increased the consumption of ultra-processed products.

Family photos and a portrait of Castro decorate unpainted walls.

The poverty of this household is hard to ignore. Working on nearby coffee farms, the two women make just enough to make ends meet. Hosting tourists is a welcomed addition to their income.

After lunch, our guide Vertalina came back and took us on a hike. Vertalina speaks good English, but I preferred practicing Spanish with her. She says she enjoys giving tours and dreams one day to open her own tourist agency.

Small households, like the one we just visited, are nested amidst the lush green of the highlands. There about 670 inhabitants in La Reina.

Adults and teenagers were playing baseball on a clearing.

I asked Vertalina whether there is a school nearby for the local children. Taking a little detour from our route, she showed me the building of the elementary school, which was currently in session.

After an hour of walk, made longer by Ayan’s refusal to be carried, we reached а high point with a good view of the surrounding mountains.

Because of a relatively high altitude, the climate here is cooler than the majority of Nicaragua. Frequent precipitation makes the climate perfect for growing coffee.

On our way down we passed a small patch of coffee shrubs planted on the side of the hill.

The story of coffee in Nicaragua can be traced to 1850, when one German couple settled in the area and started growing coffee. Coffee came to be of very good quality, so soon many other Europeans and Americans showed up to do the same.

Taking a different route back, we came to an abandoned gold mine. In the 1930’s the community was the principal city in the mining industry in the Northern Nicaragua.

Soon we were back in Blanca’s house. The kids were happy to see each other, as if they were old friends who haven’t seen each other for ages.

Ayan’s sociability makes him a great asset in social encounters. Nothing like children to break the ice.

Sitting under the slate roof, waiting for the tropical shower to pass, Blanca’s mother was telling us about herself. She lives now in her parents’ house, not far from here. They passed away recently. It’s not easy for her to talk about them, the wound is still fresh.

The rain was soon over. Saying goodbye to our hosts, we boarded a taxi that came to pick us up. The evening was closing down on Matagalpa, when we returned to our hostel.

There is a something universally human to meeting people in their homes. Being invited in, sharing a conversation and a meal, we partake in an ancient bonding ritual, which erases, at least temporarily, all borders and distances between us.

If you enjoyed this post, subscribe to my newsletter for more inspiring stories from Latin America and beyond.