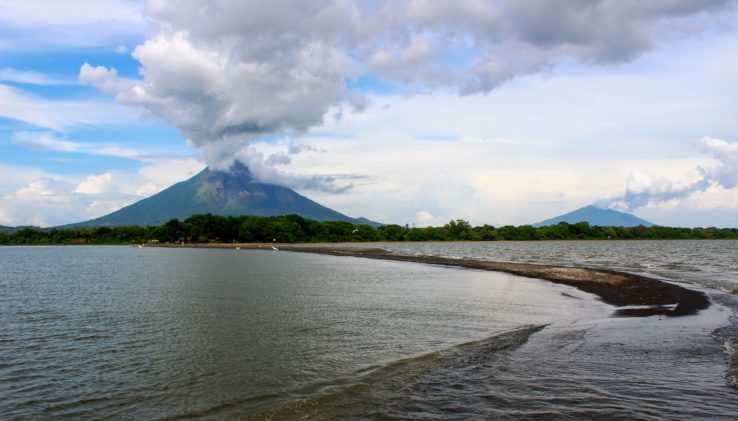 Sun scorching through the clouds, slow-moving boat, slow-moving time. Our ferry filled with napping locals transporting bags of groceries, and few tourists with backpacks, was making its way through the quiet waters of Lake Cocibolca on its way to Ometepe. Gazing at the volcano slowly appearing from the water, I was thinking about the strange hold the word “Nicaragua” has always had on me. 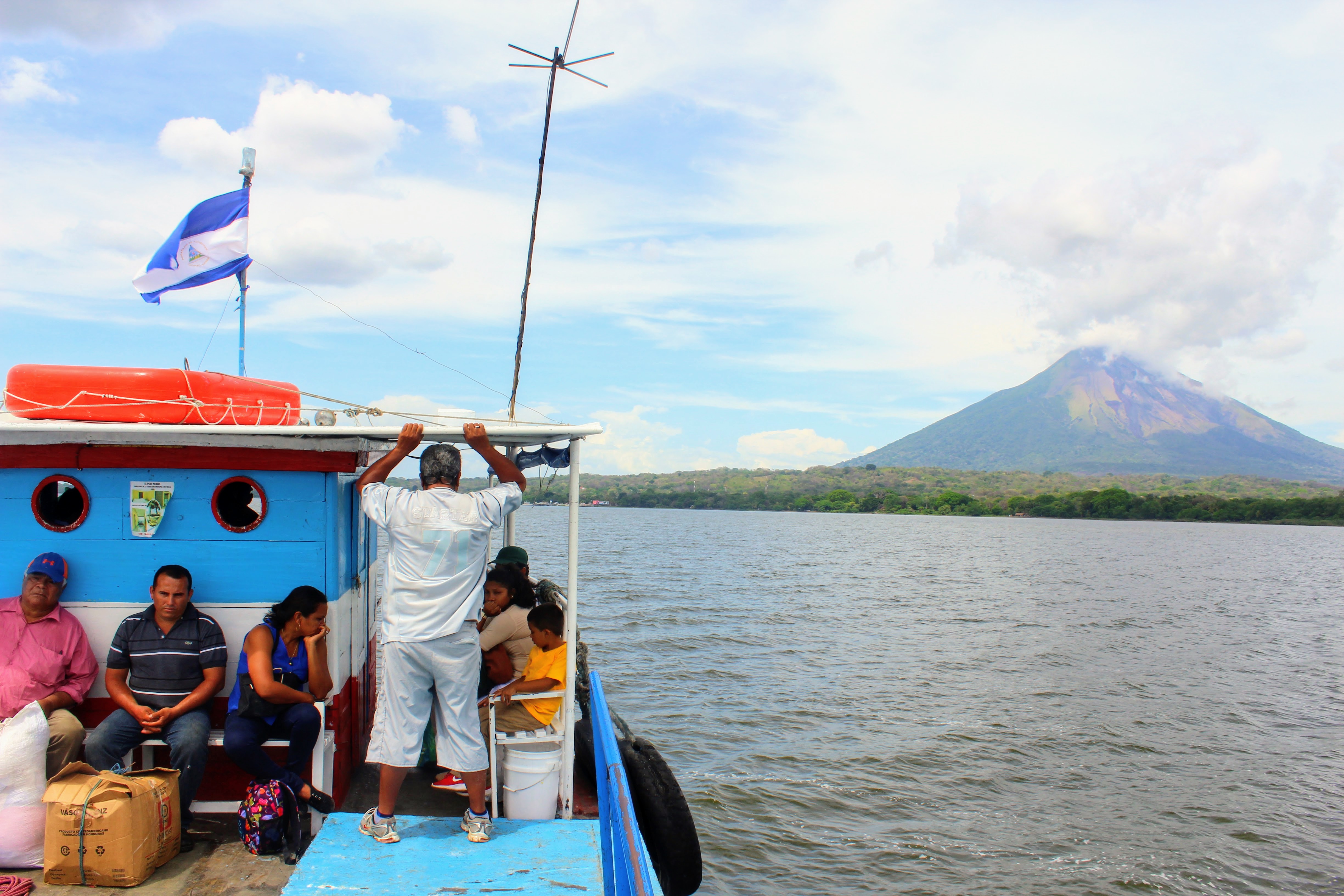 Unlike any other country name, its strange sound has transfixed my imagination ever since I was a child. Exploring a political map of the world that hanged in my room in my hometown in the Ural mountains on the other side of the world, I used to repeat it to myself. Nicaragua, Matagalpa, Cocibolca, Managua. These sounds conveyed coded messages I could never decipher. Juxtapositioned with pictures of guerilla fighters in tropical setting, the Soviet news programs have brought from time to time, the resulting image was a source of endless fascination for me.

Thirty years later, coming to Central America after 6 months in Mexico, we were about to discover the country and the people behind the name. Months before President Ortega’s forces gunned down a peaceful demonstration of students, killing hundreds and throwing the country into a chaos, this was a time of peace and stability for the war-torn nation. Tourism was growing and Ometepe island was on everyone’s lips. After a few weeks in Granada we took a taxi to the coastal town of San Jorge where we boarded the ferry. 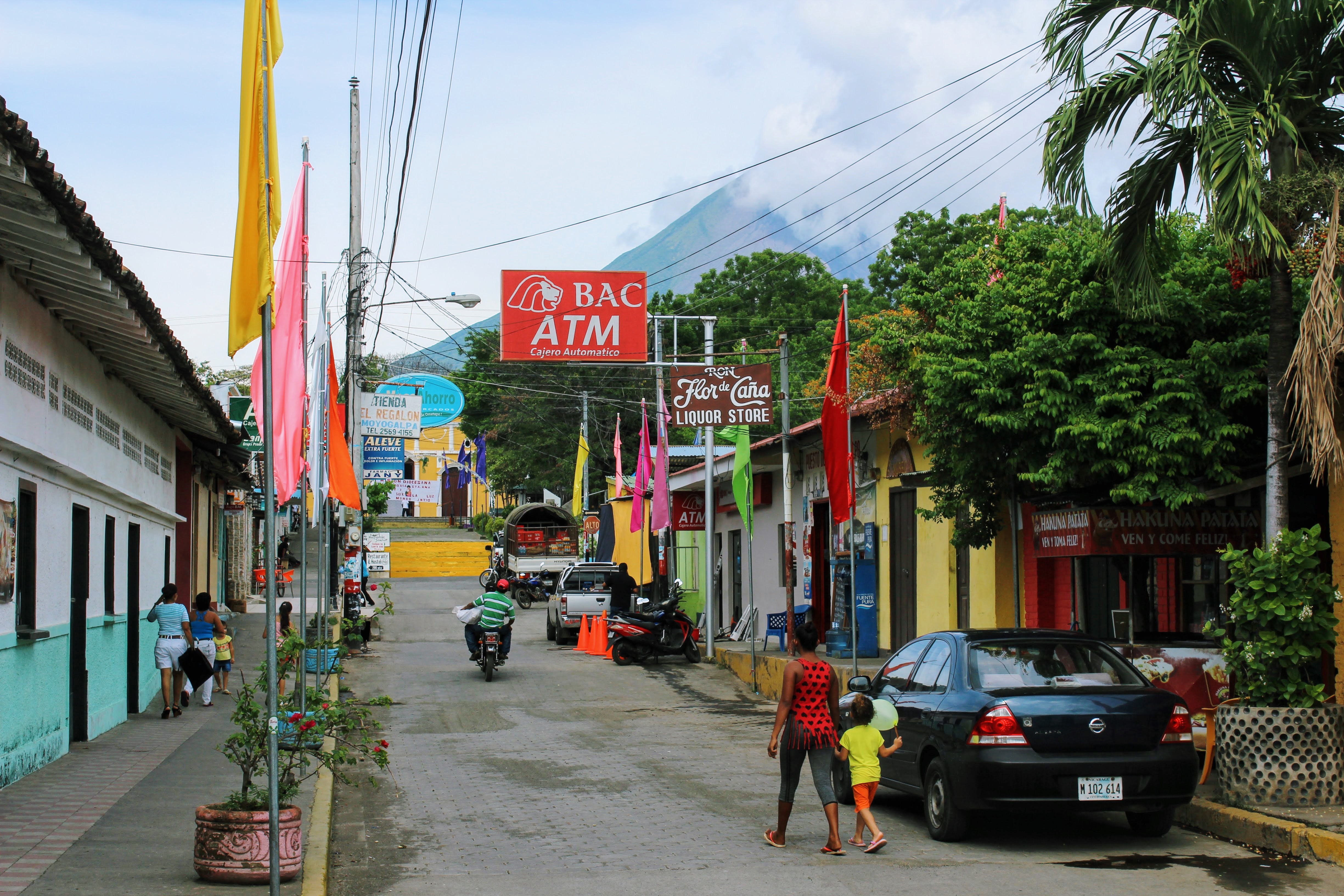 The boat left us in Moyogalpa, the largest village on the island. Hostels and restaurants stacked chaotically on top of each other, “pulperias” selling sodas and snacks. An unremarkable place, redeemed by the abundance of color and the towering of Concepción volcano above it .

Renting a car with a driver, we headed out of the town. Concepción followed us. Reaching an altitude of 1,610m, it makes Ometepe the world’s highest lake island. 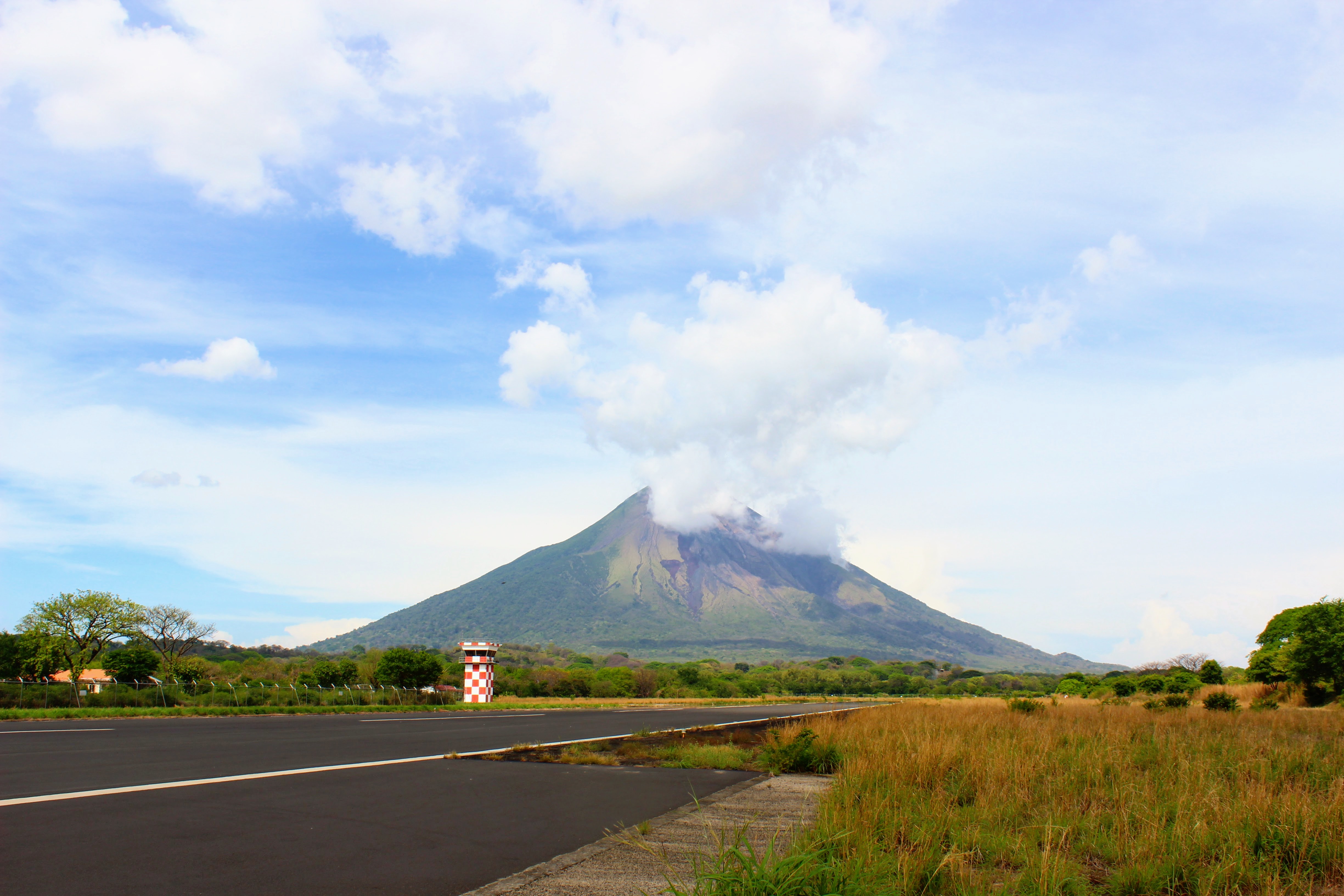 The military airport of Ometepe

Concepción is active. Since 1883, it has erupted 25 times, with the last eruption happening in 2010. The soil, enriched with volcanic ash, is very fertile. 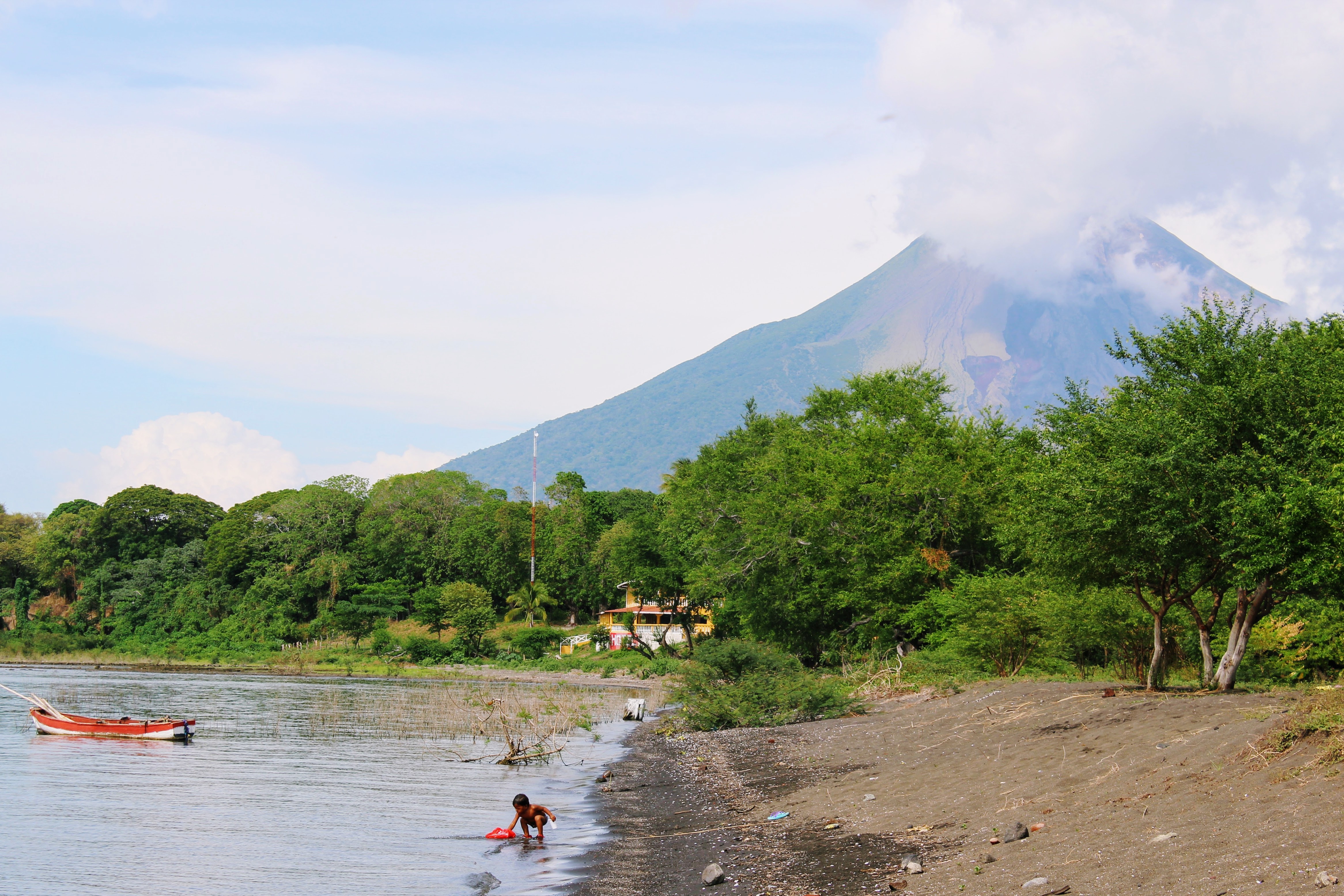 Soon we arrived at Punta Jesús María, the westernmost point of the island. After paying $1 at the entrance, we continued along the beach. 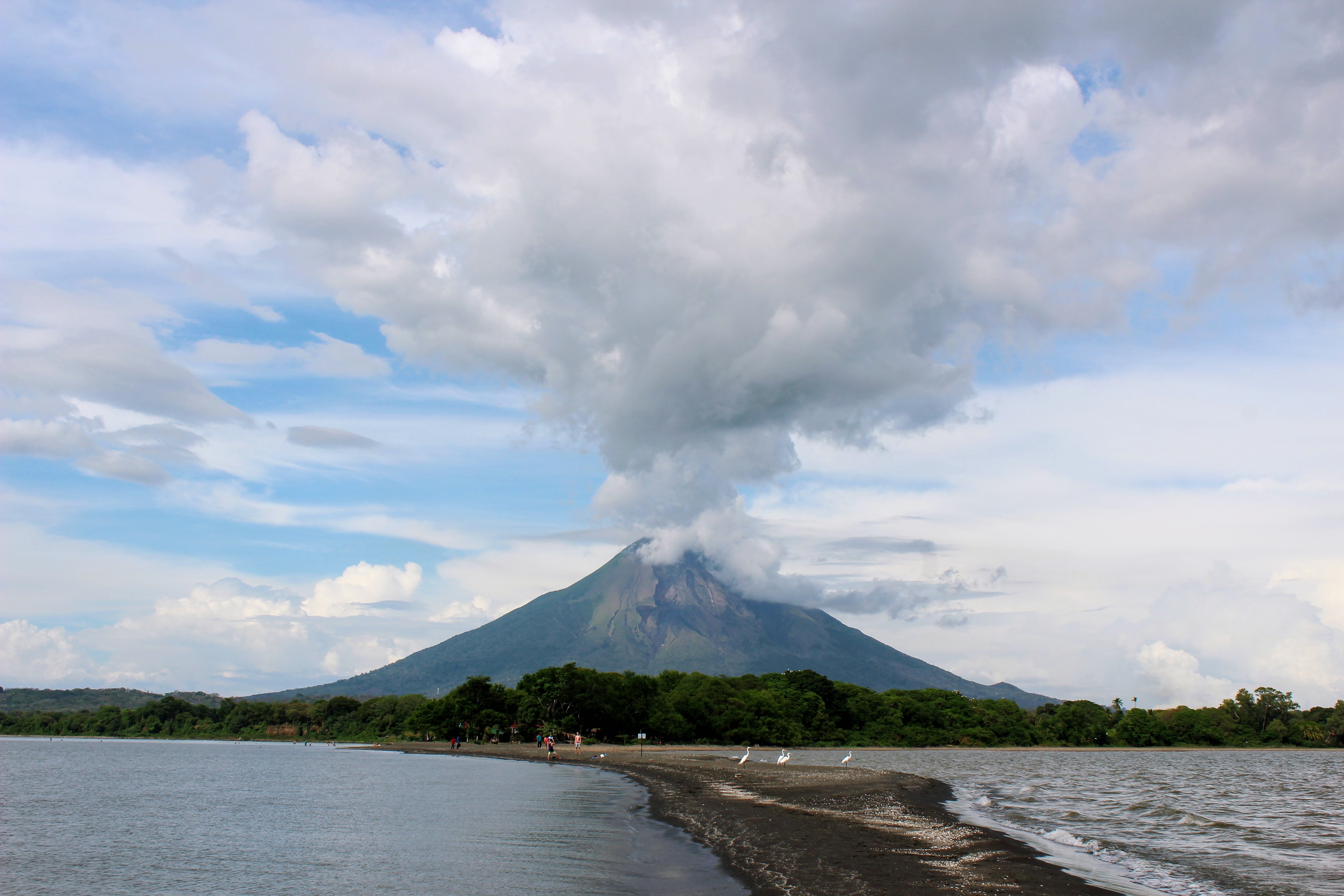 A narrow strip of sand stretches far into the lake. Where it ends, shallow water begins. 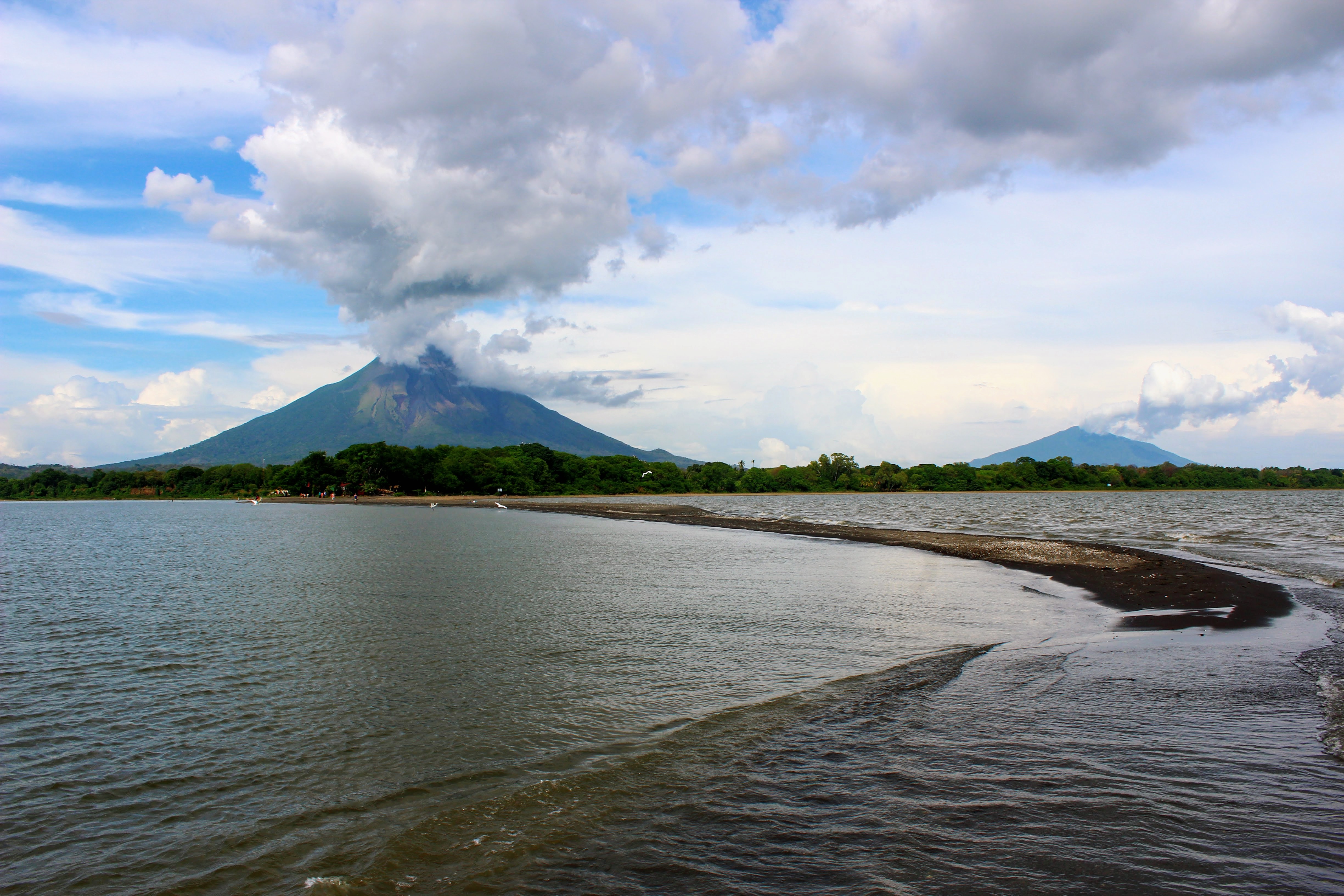 From here, the view of Ometepe’s two volcanos is unparalleled. The waves coming from left and right crash into each other spectacularly, as if Concepción and its smaller brother Maderas were wrestling to see whose waves were stronger. 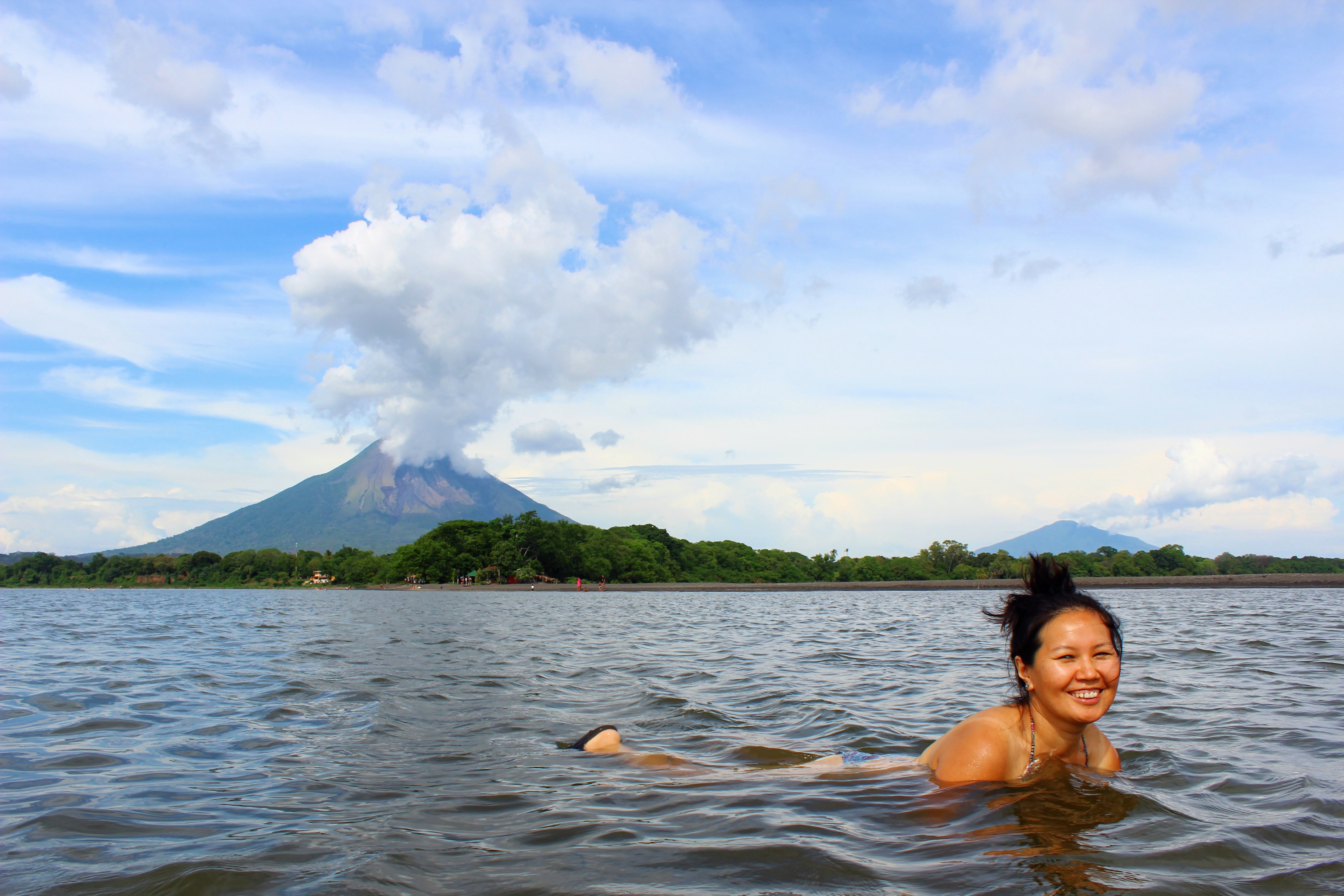 Soon we were back on the road, returning back to Moyogalpa and continuing east to Altagracia. The road was mostly empty, sometimes shared between cattle and tourists on bicycles.

Altagracia is a small municipality with a pretty church, built in 1924. Spared the touristic sprawl of Moyogalpa, it’s respectful and quiet. Altagracia, called Astalgalpa in Nahuatl, was the indigenous capital of Ometepe in pre-Columbian times.

Inside, the church is festive, with Mary and Jesus dressed in white. 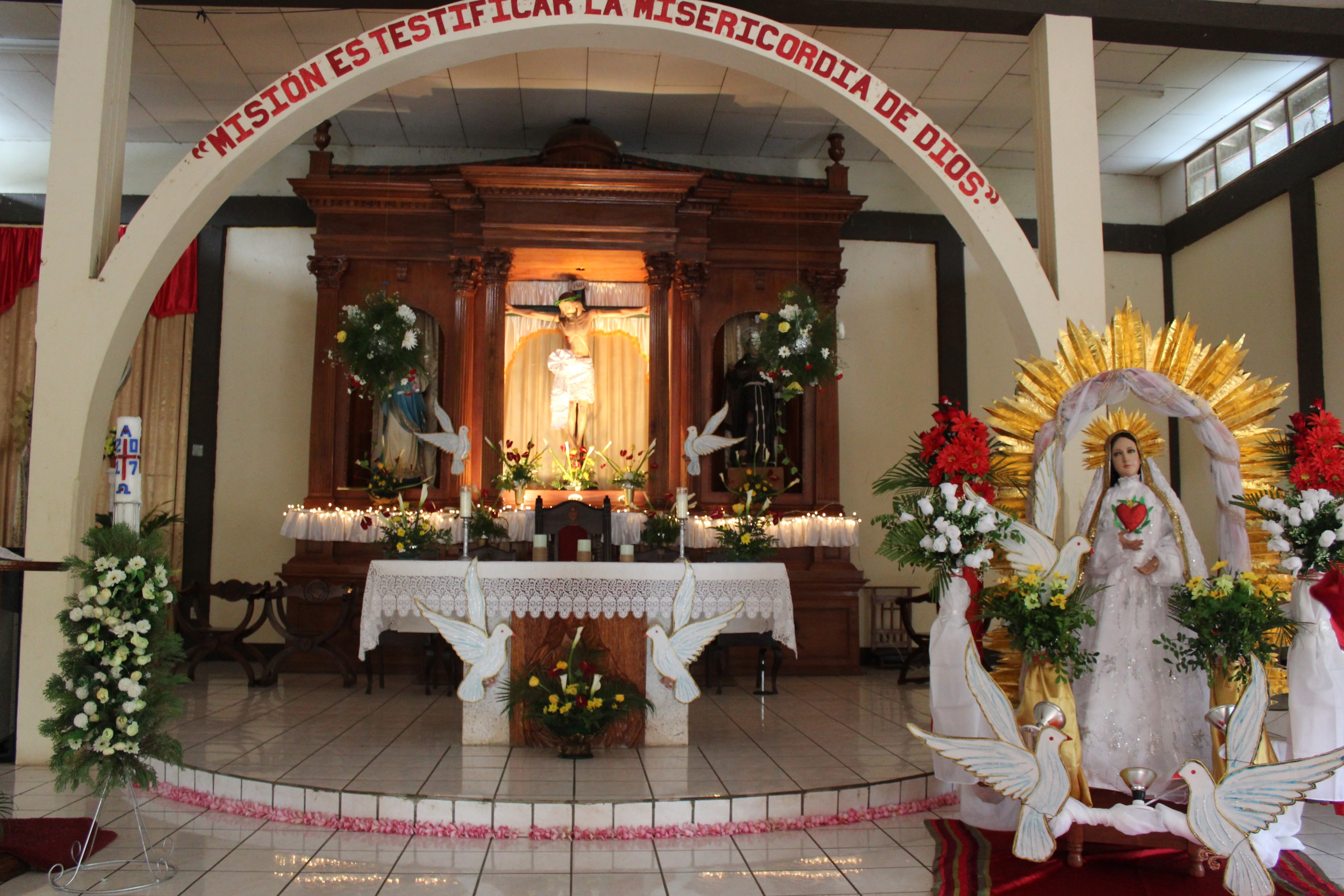 Several large stone idols stand on the grounds of the church. Pre-Columbian petroglyphs and statues have been found all over the island. 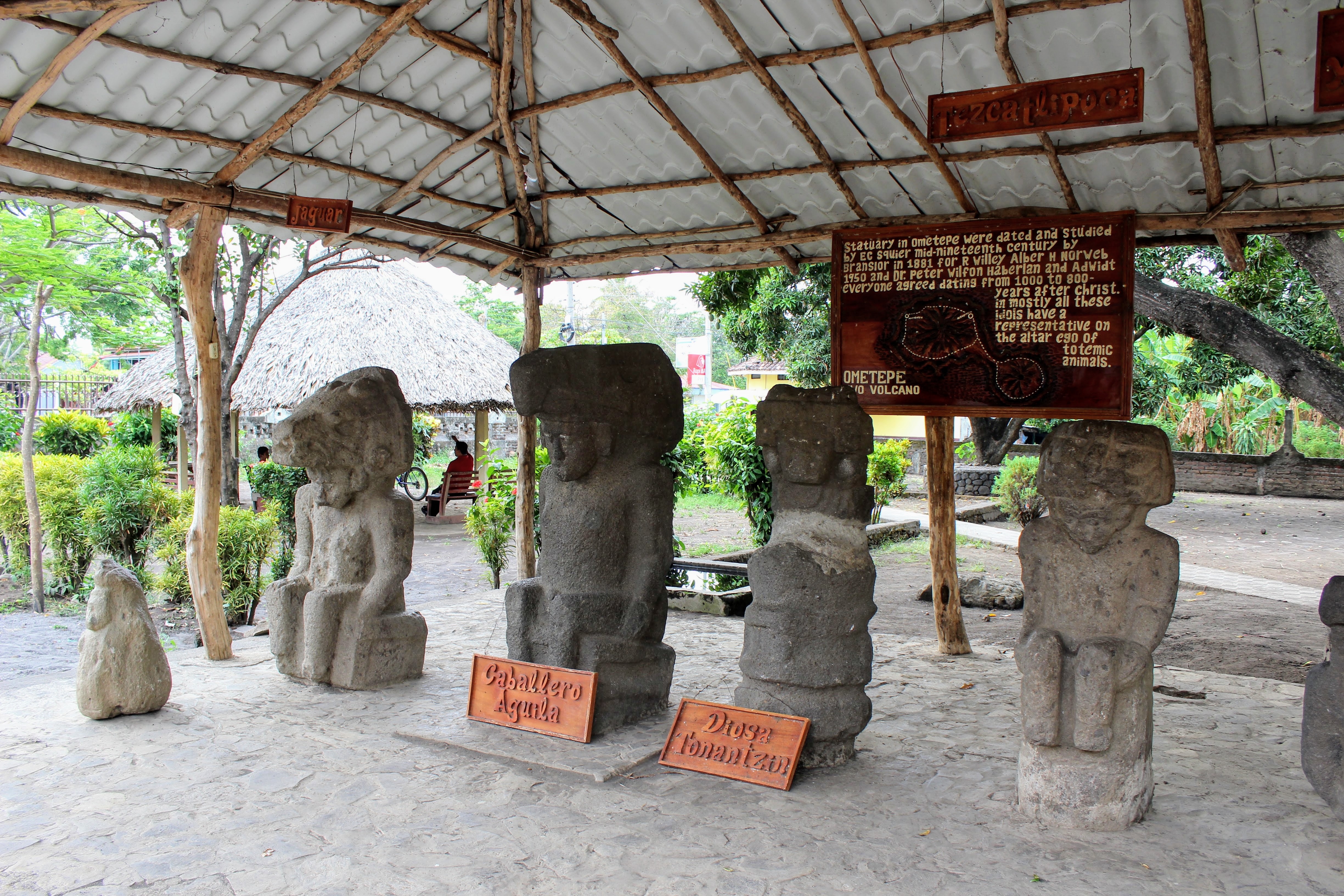 Continuing with the road south, we soon arrived to Santo Domingo beach. 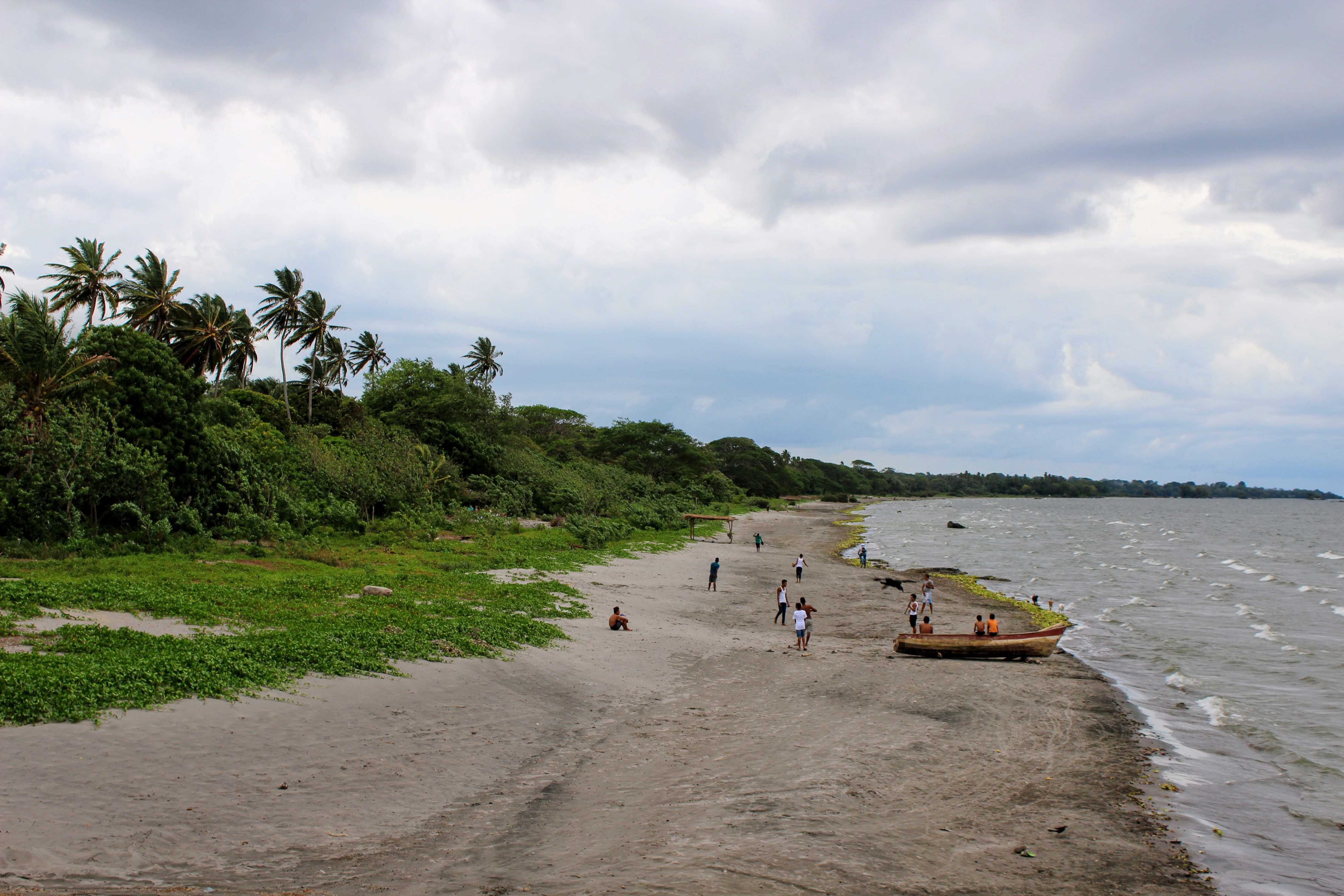 Situated on the island’s north-eastern side and faced with constant winds, it’s the wilder side of Ometepe. 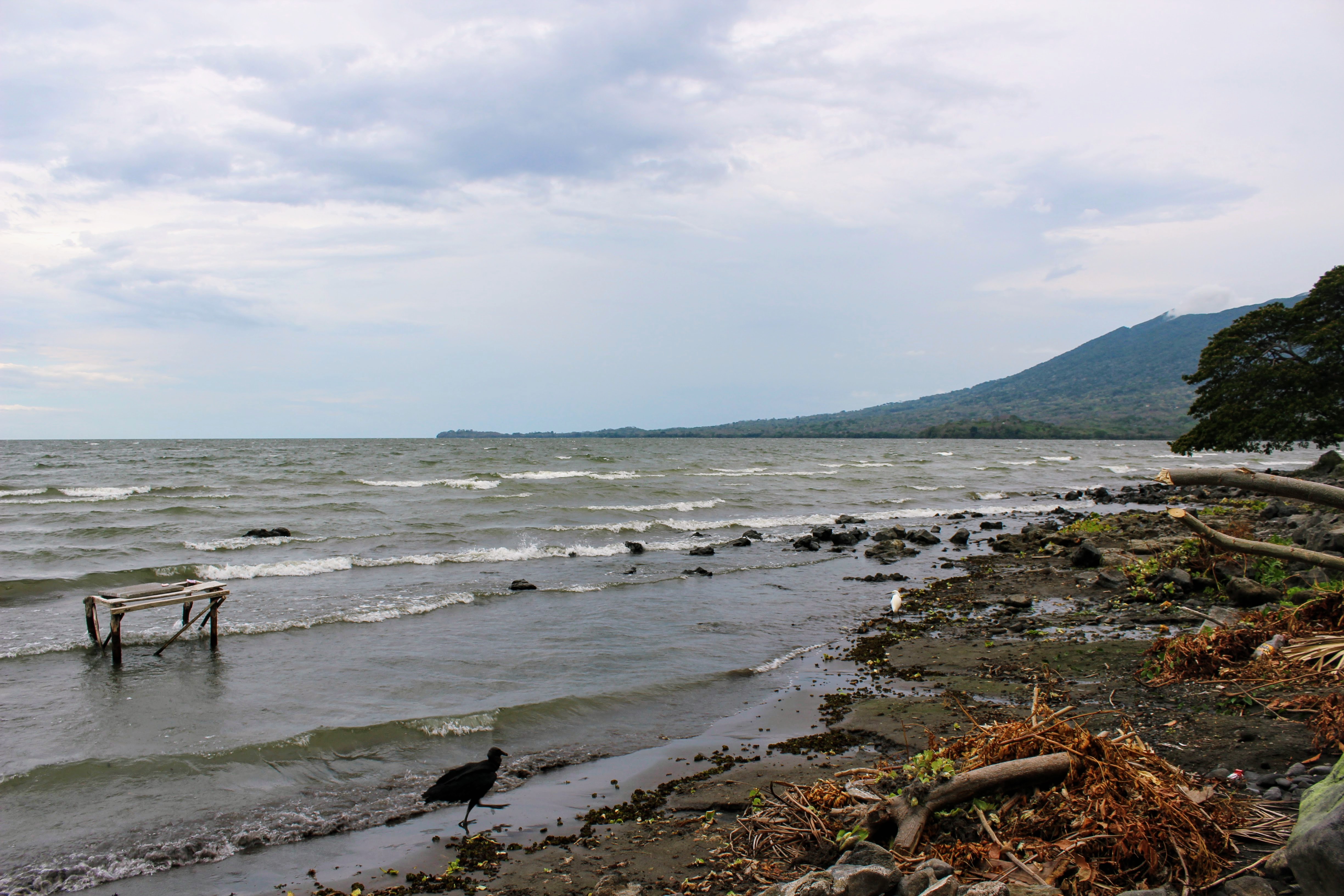 After a late lunch in the nearby Comedor Jackeling, we continued to where we were going to spend the night.

The evening was setting in when we arrived in Finca Magdalena.

Located at the foot of volcano Maderas, Finca Magdalena is the perfect base to climb it. After a night in a wooden cabin, I went with a group of hikers to scale its 1,394 metres of rock and cloud forest, while Oxanna and Ayan stayed on the farm. 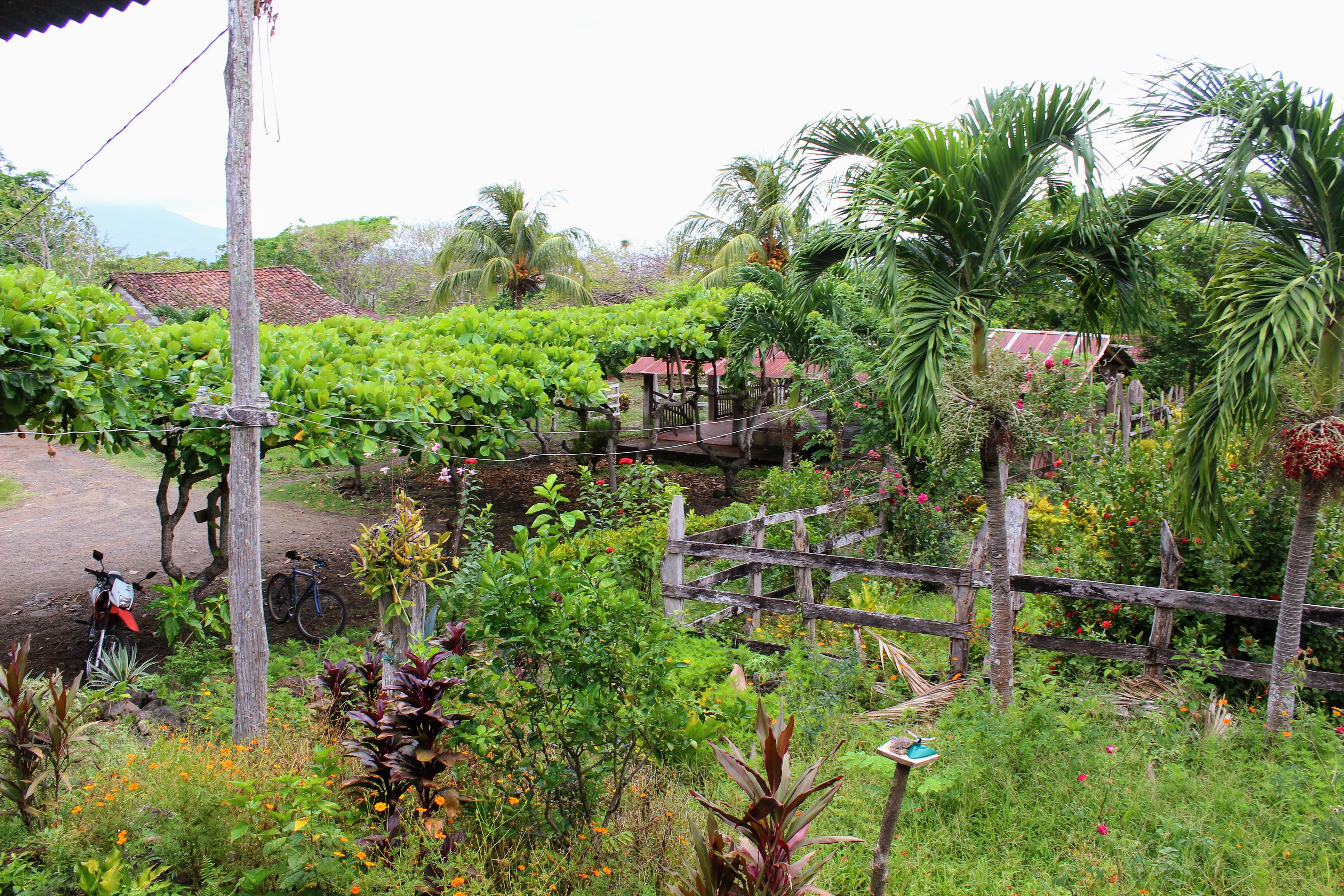 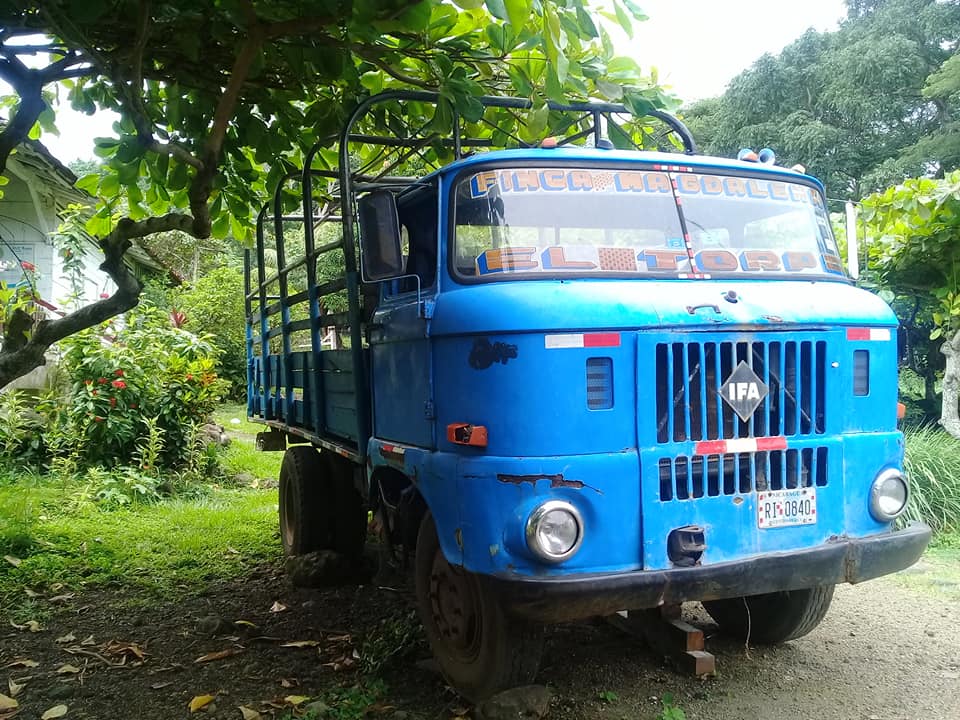 As in most of Nicaragua, this land used to belong to a distant land owner. The campesinos, although have lived here for generations, did not have many rights or services, such as schools and health centers. After the Sandinista revolution of 1979, the cooperative won the right to use the land and manage its own affairs.

Currently the farm has almost 1000 acres of land, on which partner families make decisions together. Organic coffee is one of the cooperative’s main sources of income.

The coffee is exported to United States and Canada through volunteer organizations. One such group, Ometepe Coffee Gulf Islands, sells the coffee in Vancouver and then donates their profits to projects in Central America. Grown on a side of a volcano, the coffee has a distinctly rich aroma.

Today, Ometepe is affected by the political instability as much as other parts of Nicaragua. With tourism taking a big hit, income from exports has become essential for the survival of island’s economy. Next time you shop for coffee, please consider buying Nicaraguan.

After two days in Ometepe, I was looking for excuses to stay longer.