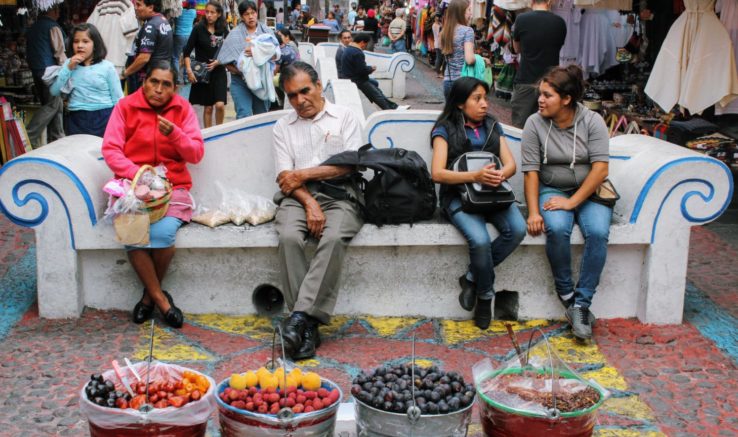 So you have been in Mexico City for a while now, the weekend is getting closer, and you fancy a day trip out of the capital? Puebla is your answer. The fourth largest city in Mexico and the capital of the namesake state, Puebla is known throughout Mexico as the birthplace of mole, the ubiquitous Mexican sauce. Even If you aren’t moved by gastronomic discoveries, Puebla’s historic center,  declared a World Heritage Site by UNESCO, is well worth a visit.

The bus from Mexico City to Puebla leaves from Terminal de Autobuses de Pasajeros de Oriente, in the eastern part of the city. To get to the terminal, you can take an Uber, but subway will be faster. That Saturday morning we get out in San Lázaro metro station and boarded the regional bus. Inter-city buses in Mexico are comfortable and safe. About 3 hours later, the bus left us in Central de Autobuses – CAPU, north of city center. A short taxi ride, and we are in the city center. 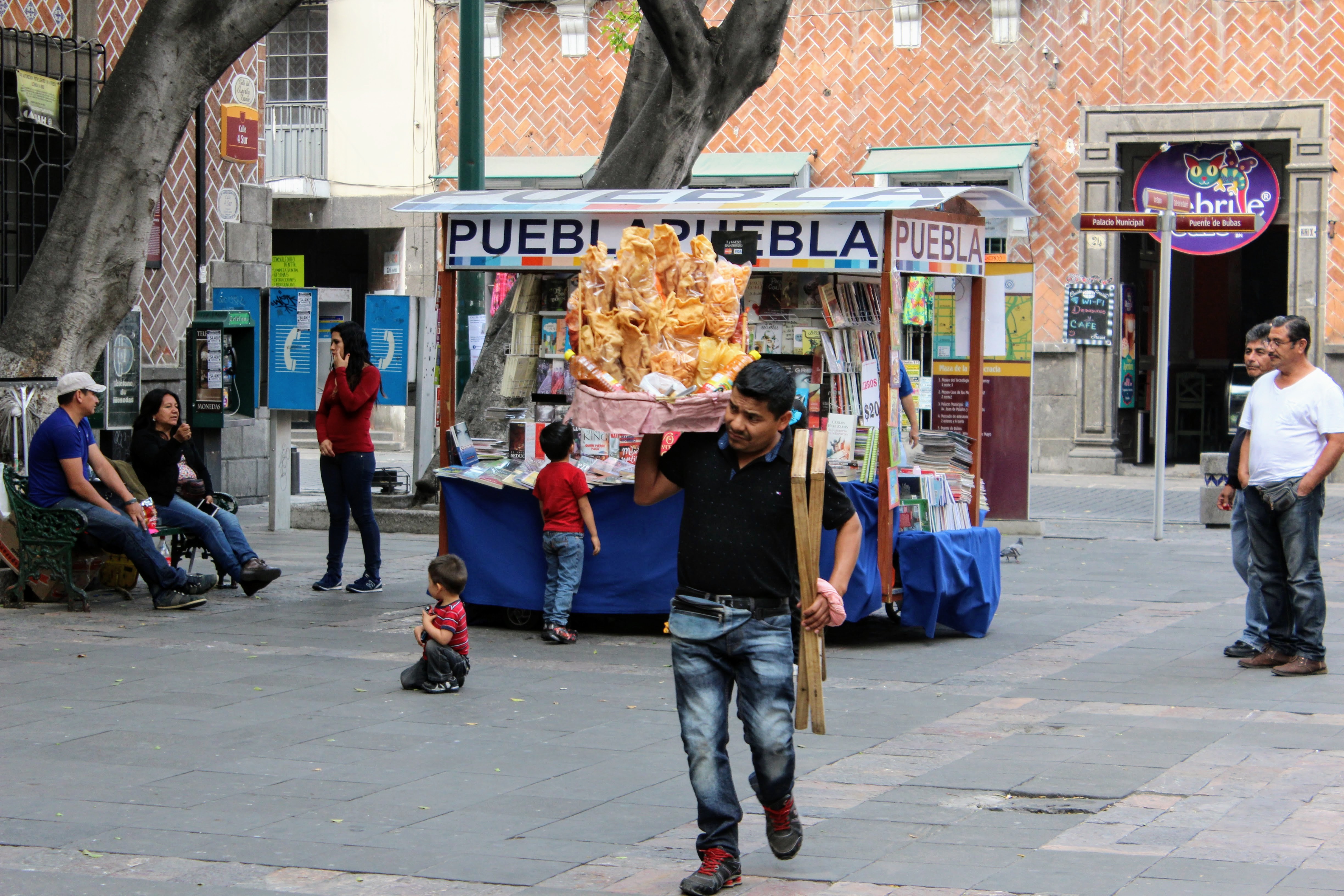 Vendors setting up their lots, Nahua and Mixtec indigenous women carrying their children in slings. People and cars hurry up and down the streets, setting the city’s rhythm. 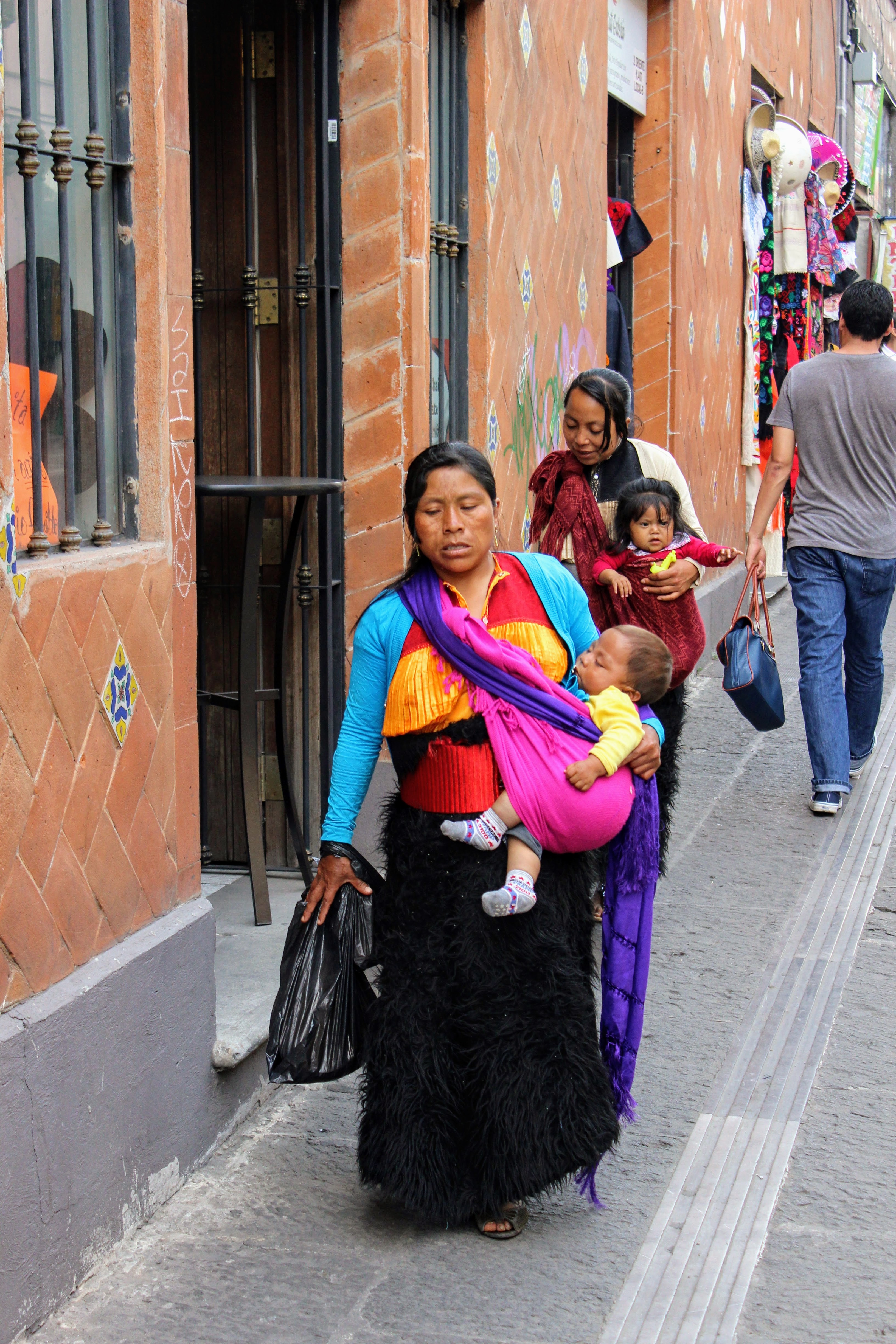 At the time nested in between two indigenous settlements, Tlaxcala and Cholula, Puebla was the first city in central Mexico founded by the Spanish conquistadors that was not built on the ruins of a conquered settlement. Its strategic location, between the port of Veracruz and Mexico City, made it the second most important city during the colonial period. 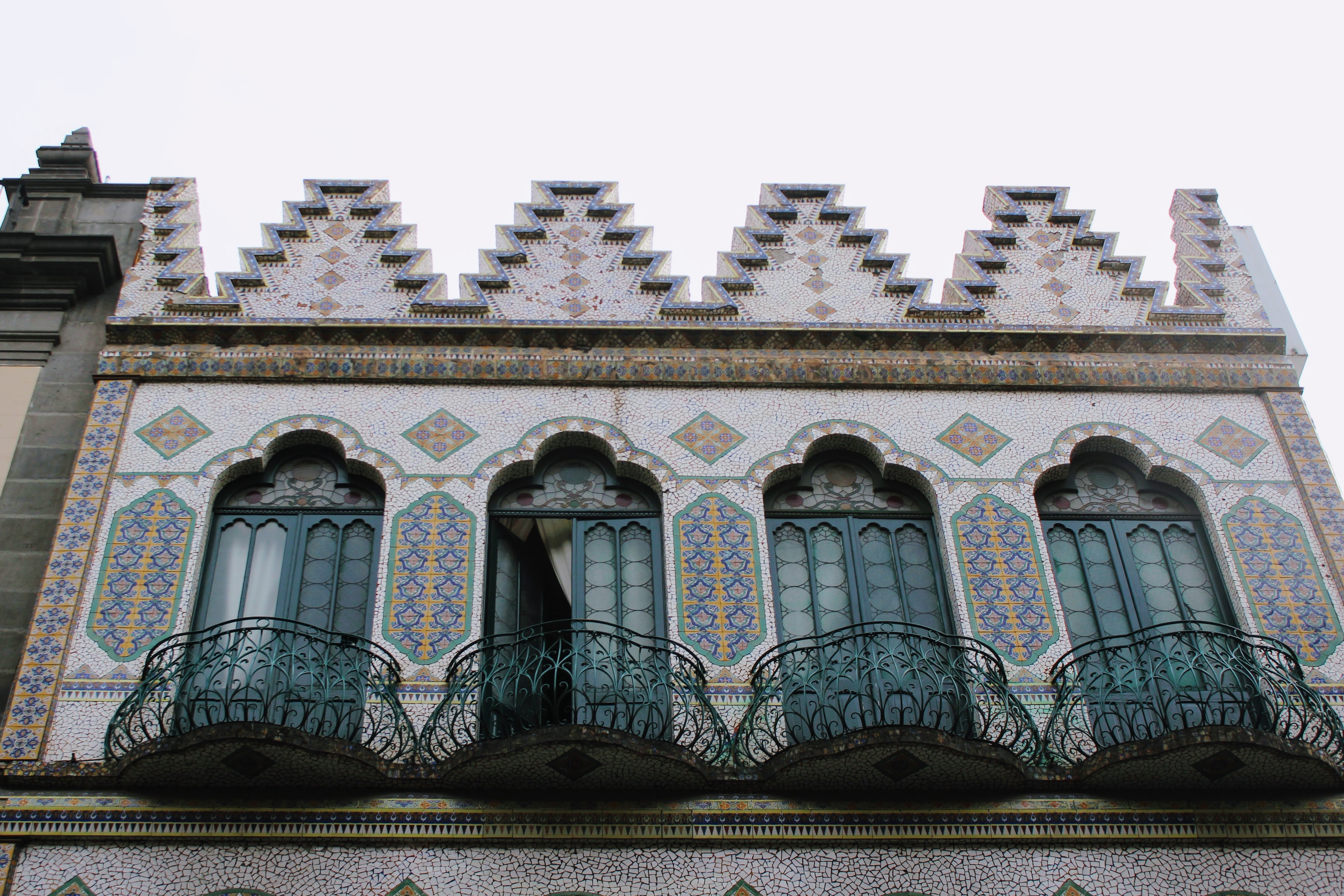 The first thing that catches your eye are the building facades. The historic center is packed with churches and mansions, mostly done in red brick and decorated with multicolored tiles. 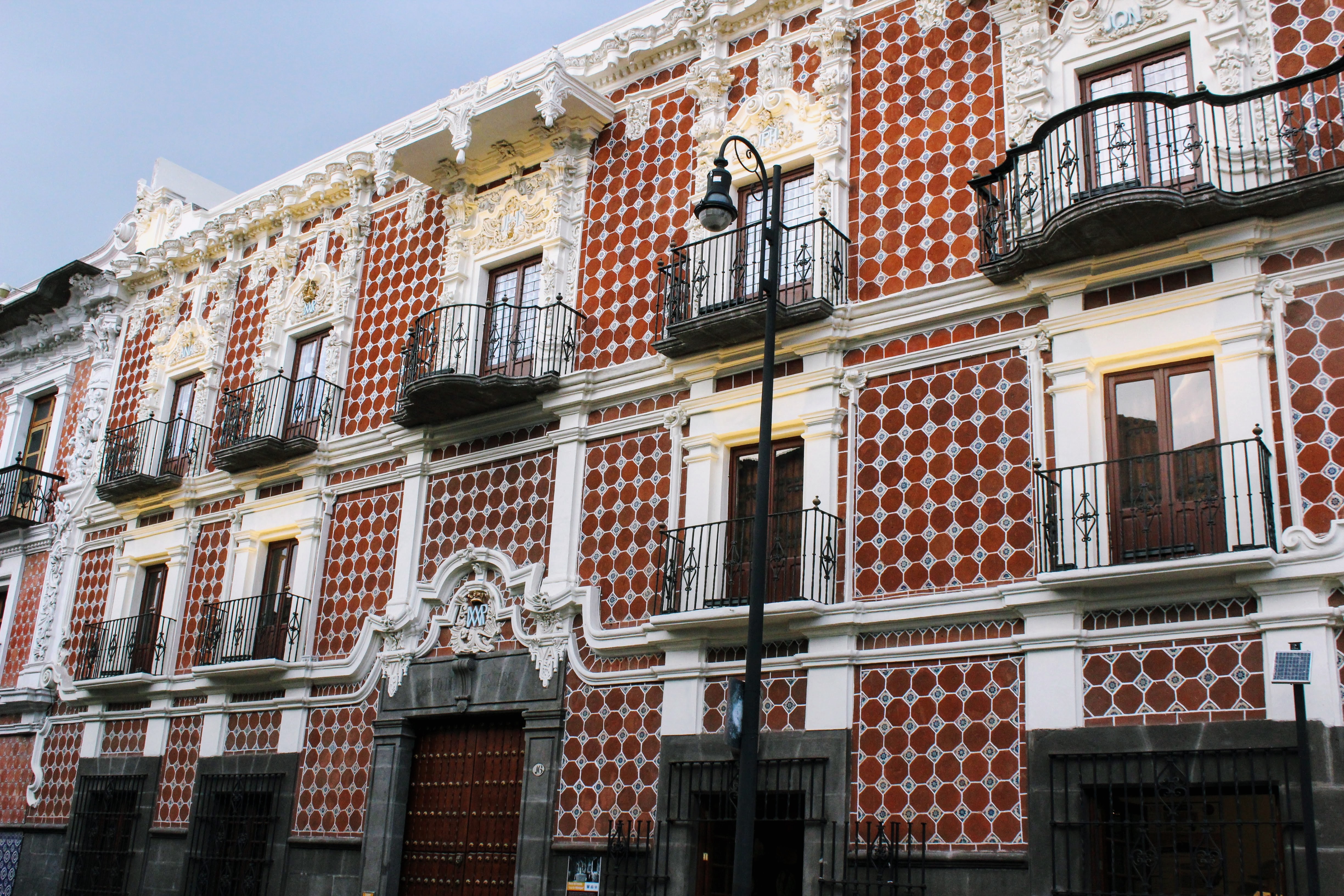 Puebla is considered to be the “cradle of Mexican Baroque”. It’s easy to see why. 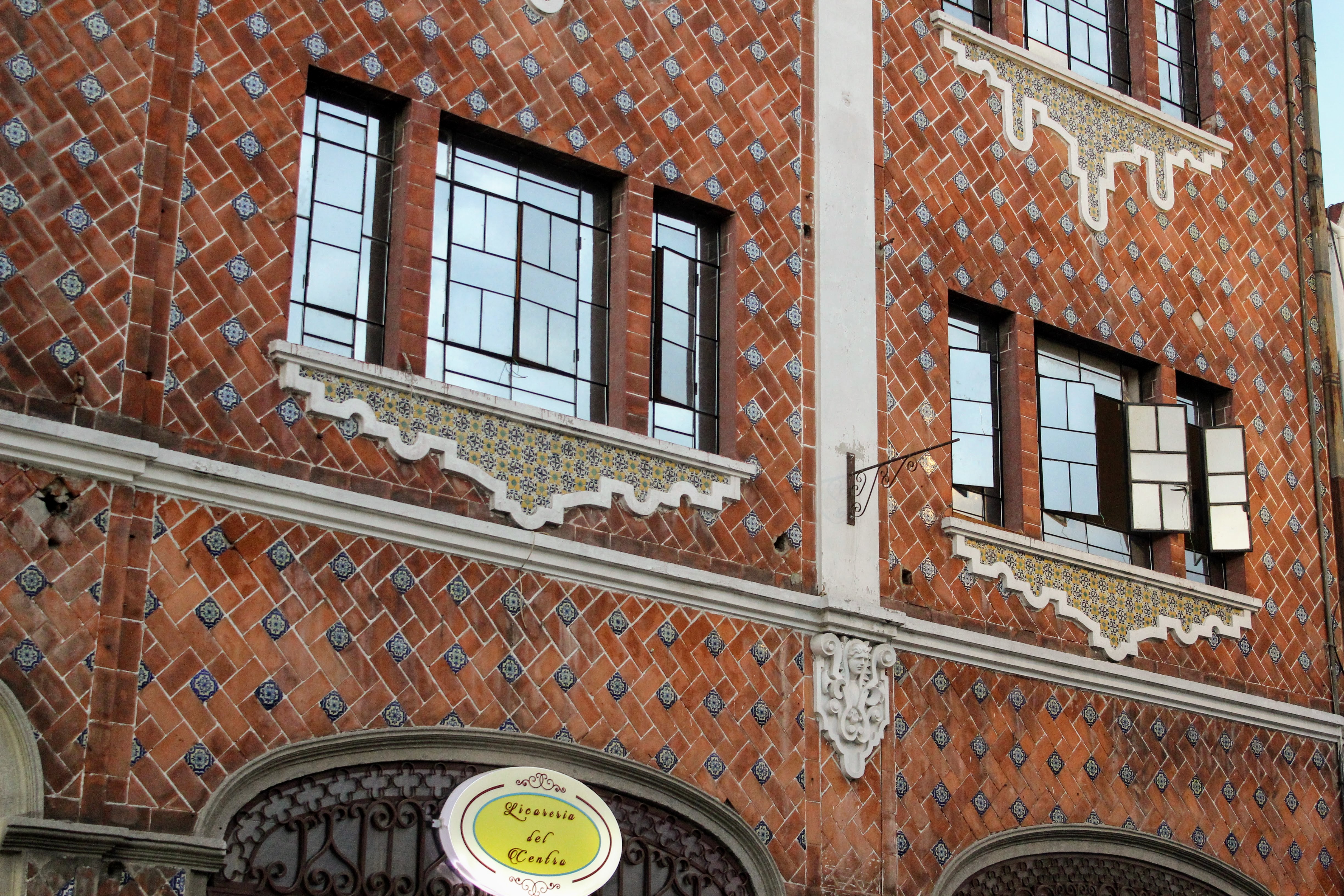 Spain as a fully Catholic nation has only existed since 1492, when the last bastion of Muslim rule, Granada, fell. However, even when Muslim rulers were no longer in charge, Muslim culture remained a dominant cultural aesthetic force in Spain. The Spanish brought these aesthetic styles with their prevalent Islamic residue along with them to the New World. 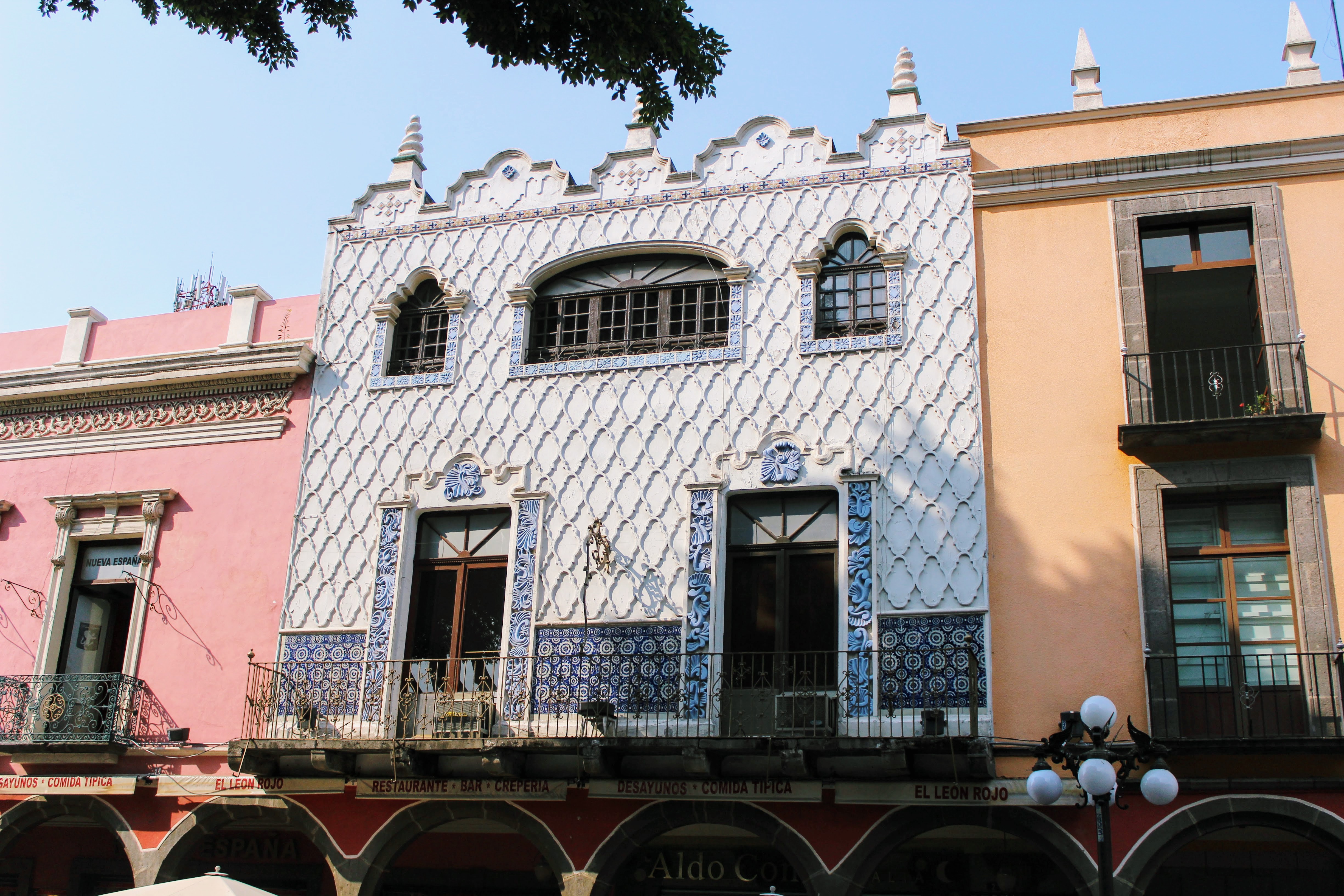 Elaborate geometric tile-work and minarets are pervasive in the architecture of the Islamic world. Puebla has a wealth of those. 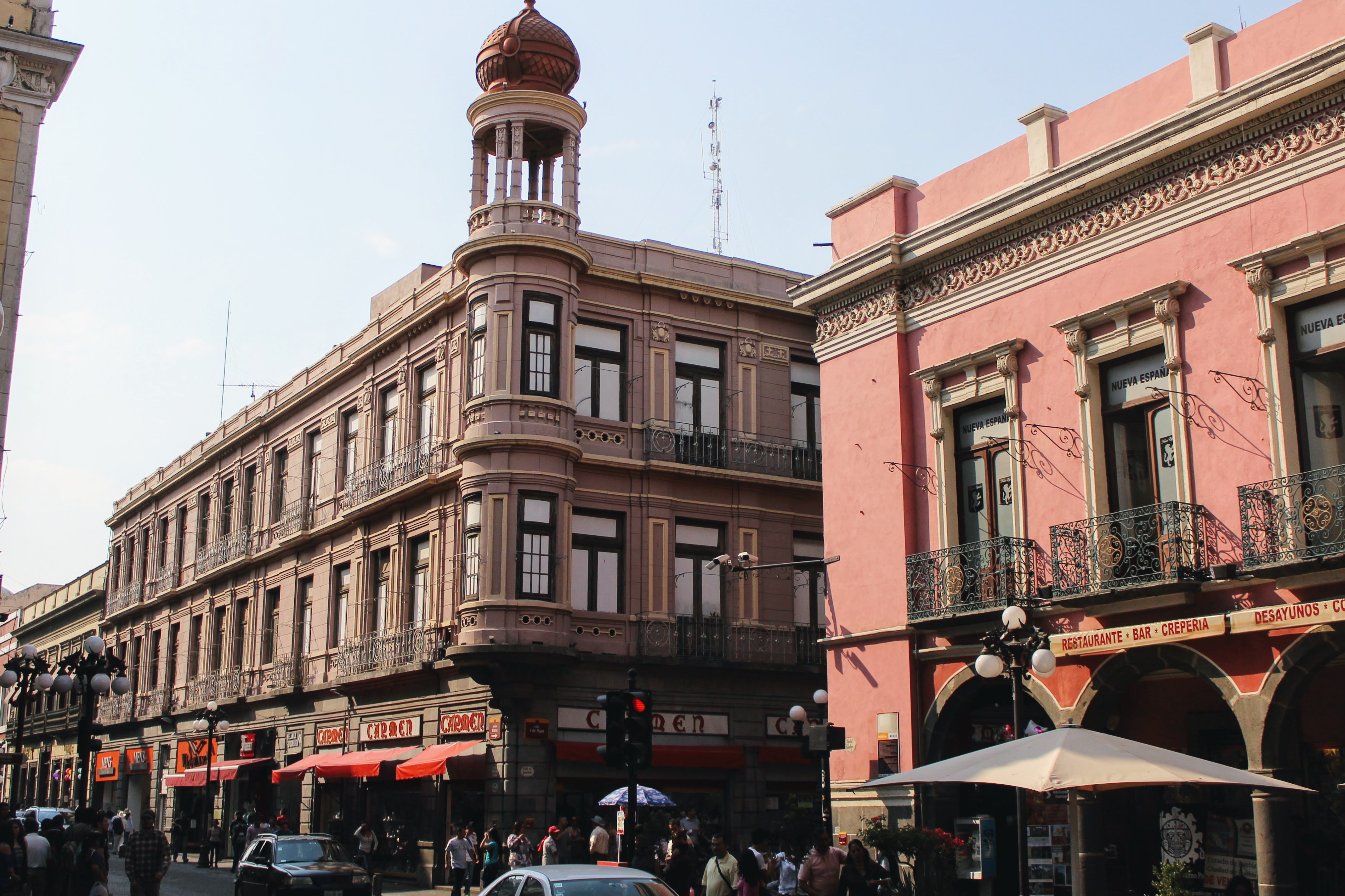 Zócalo, the main square, remains the cultural, political and religious center of the city.

The Cathedral, which took 300 years to build, stands with its side turned to Zocalo. 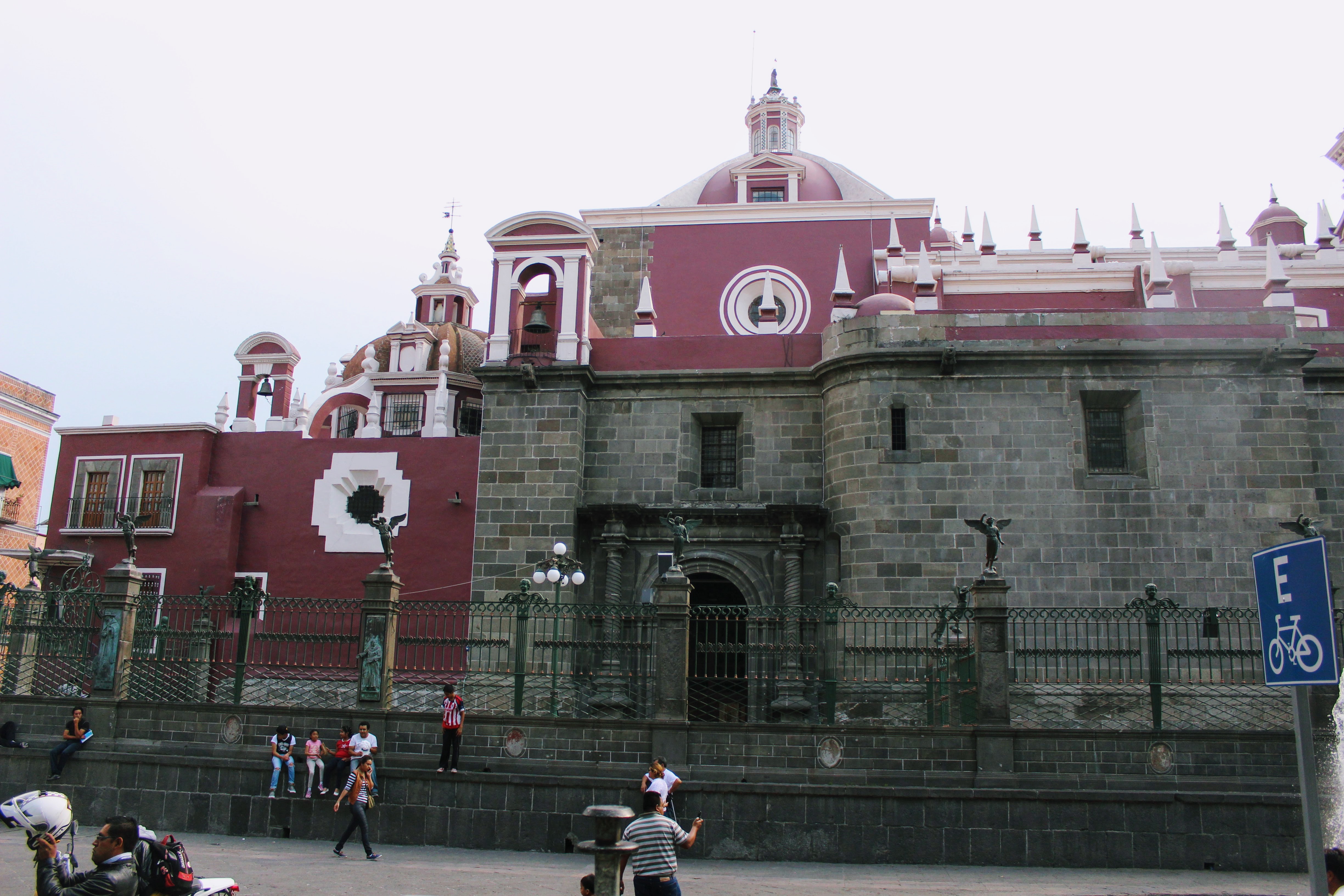 The complex consists of fourteen chapels in various styles. 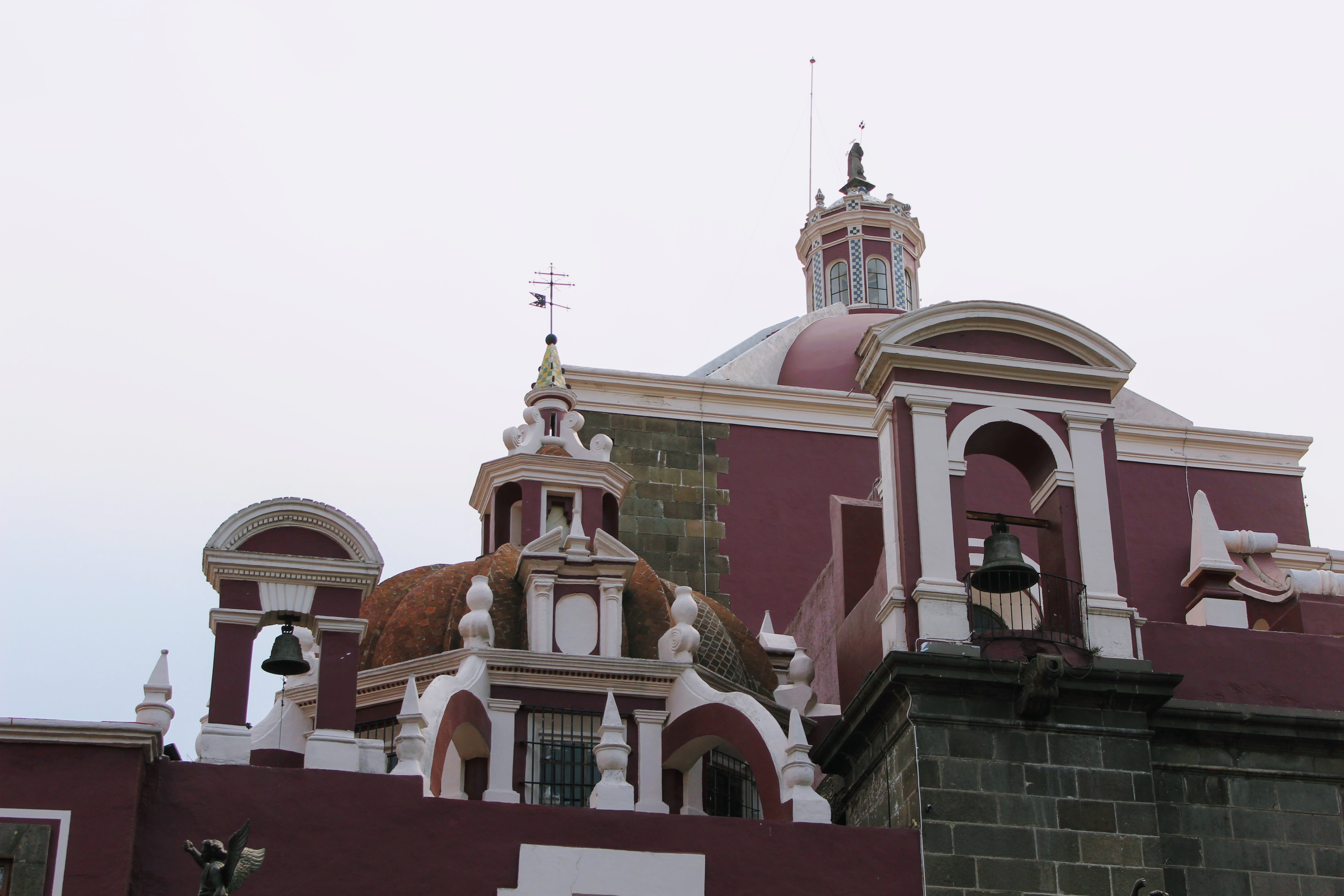 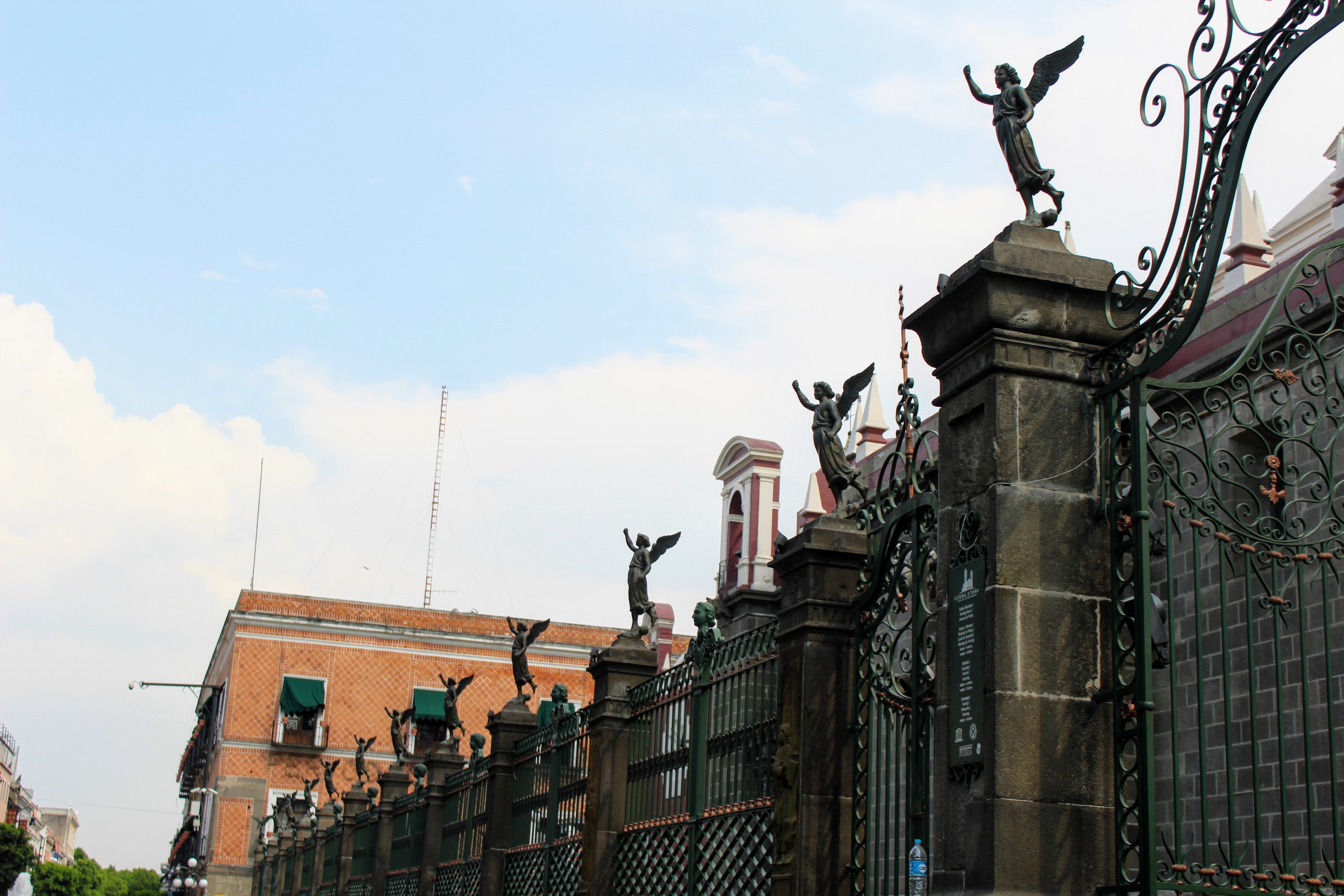 The central square always attract those hoping to make a modest living of the passing crowds. 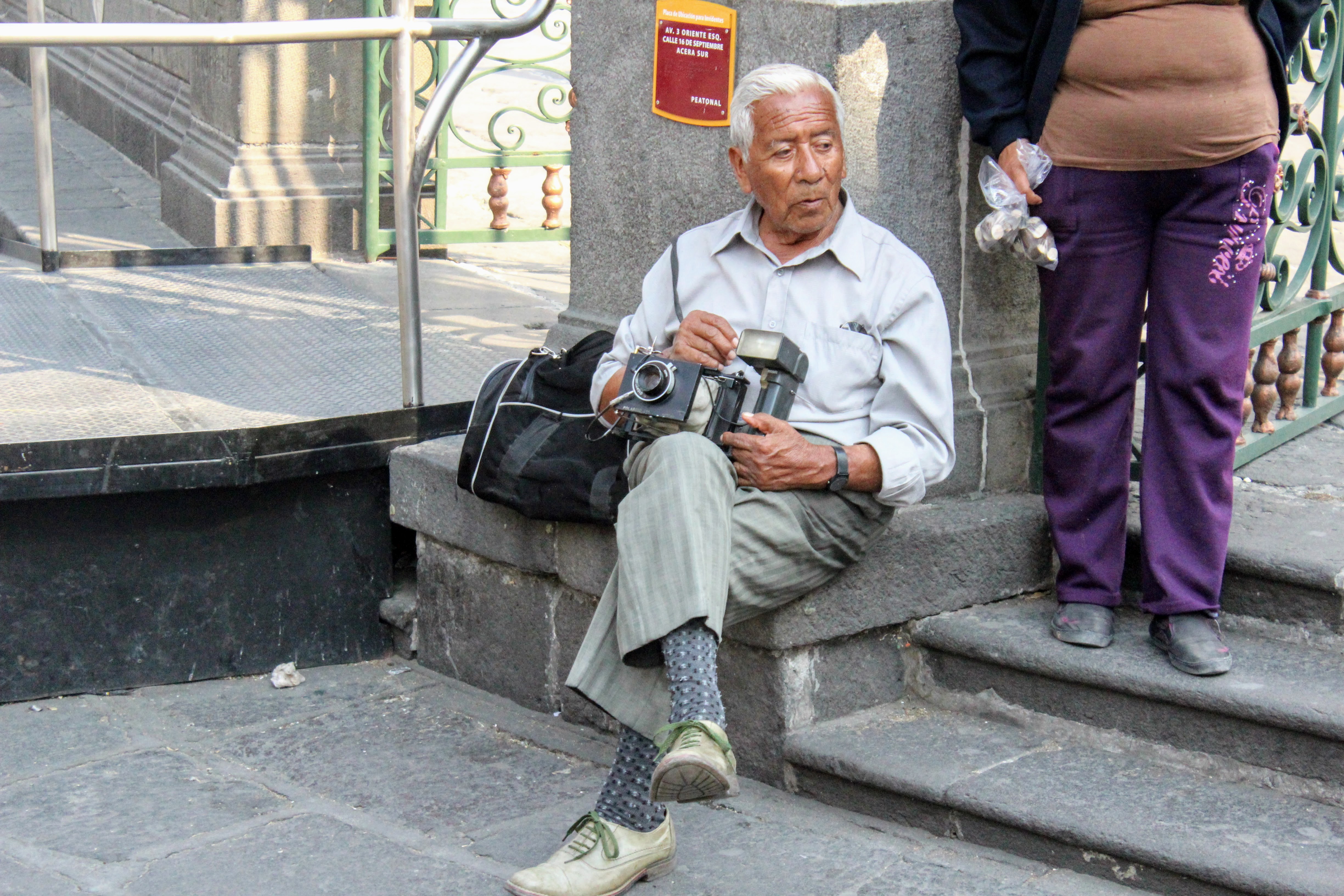 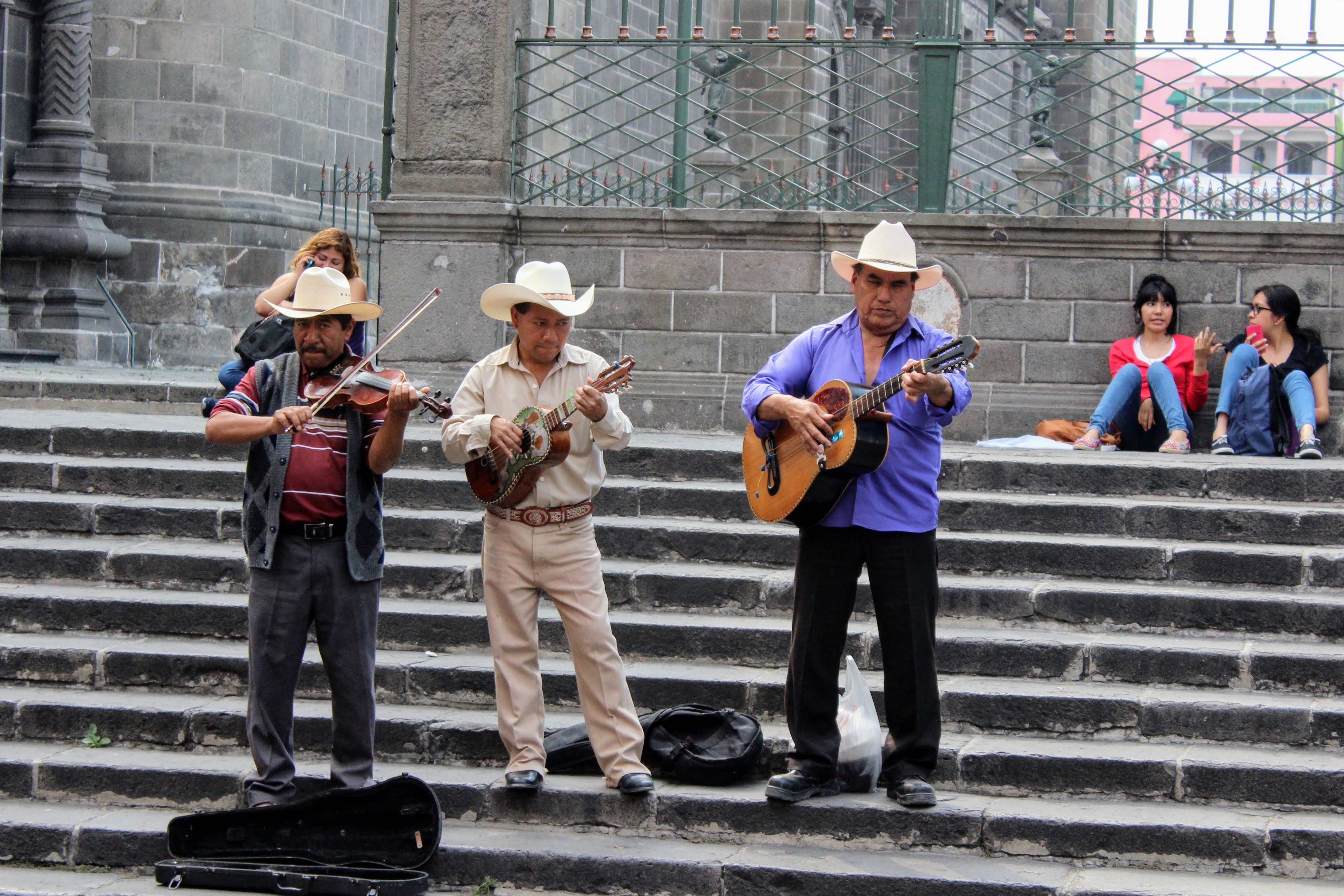 Cathedral’s towers are the highest in Mexico. 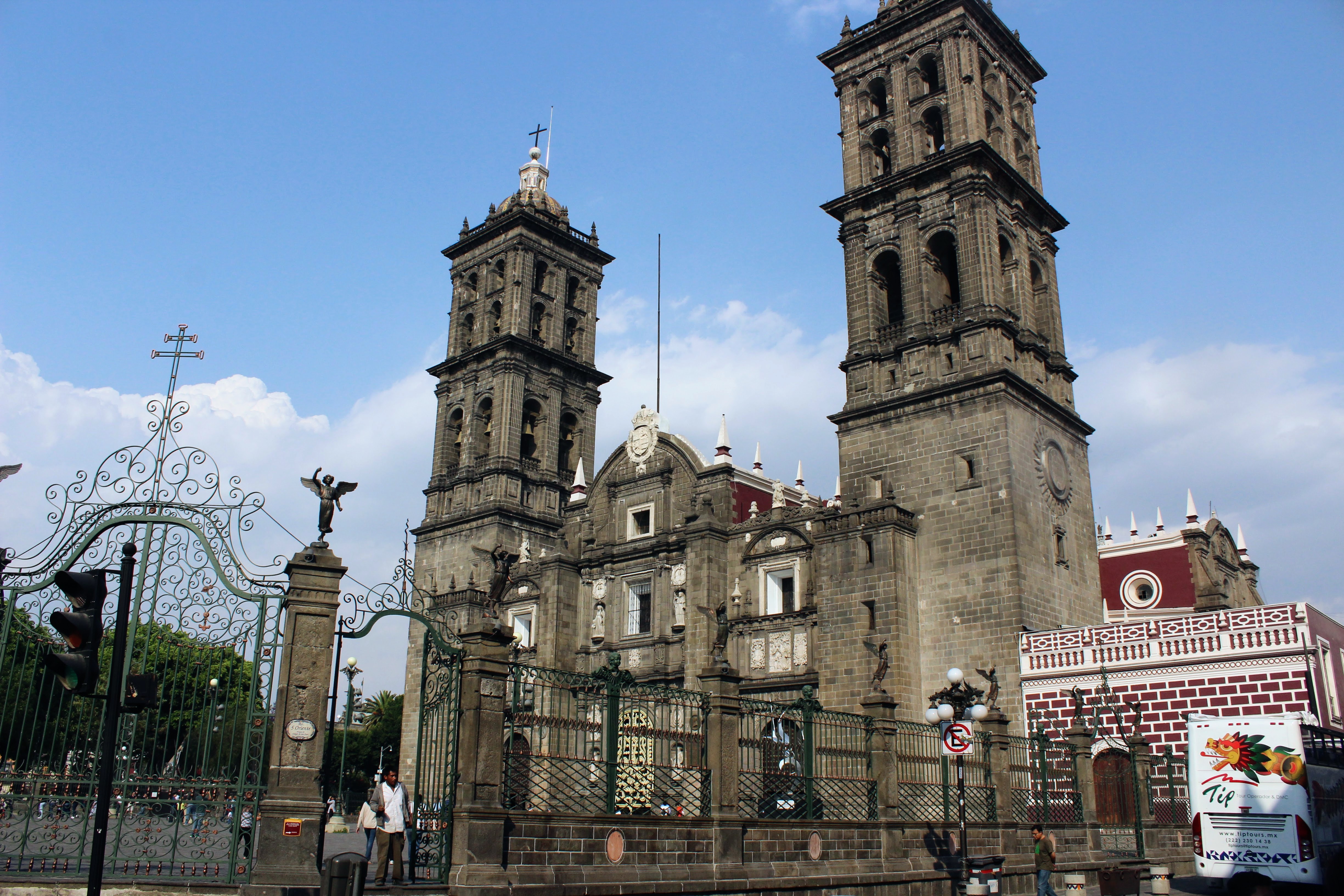 A handsome decoration made of fresh flowers and sotol palm adorns the main door, as is customary during religious festivals. Easter was just around the corner. 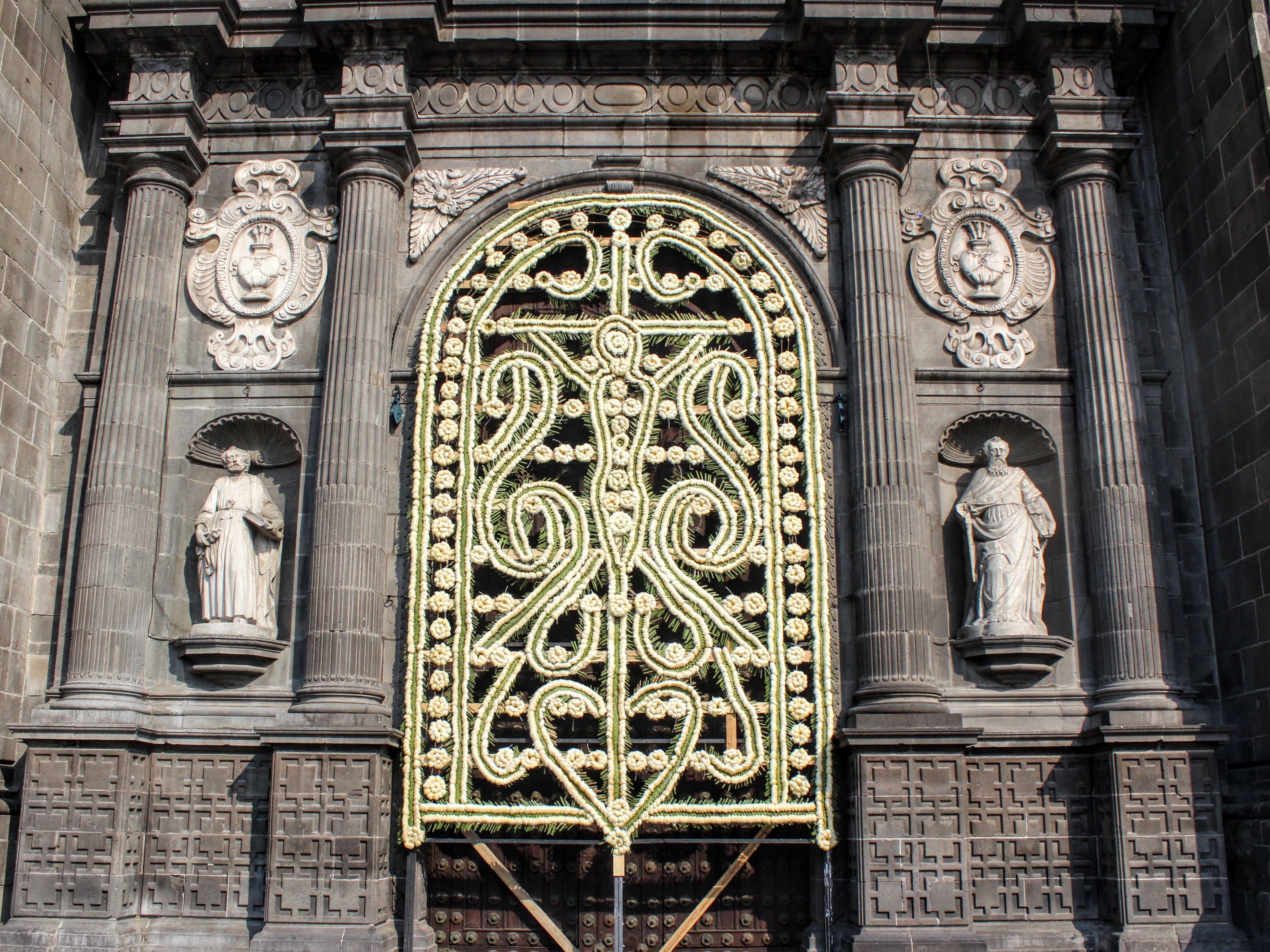 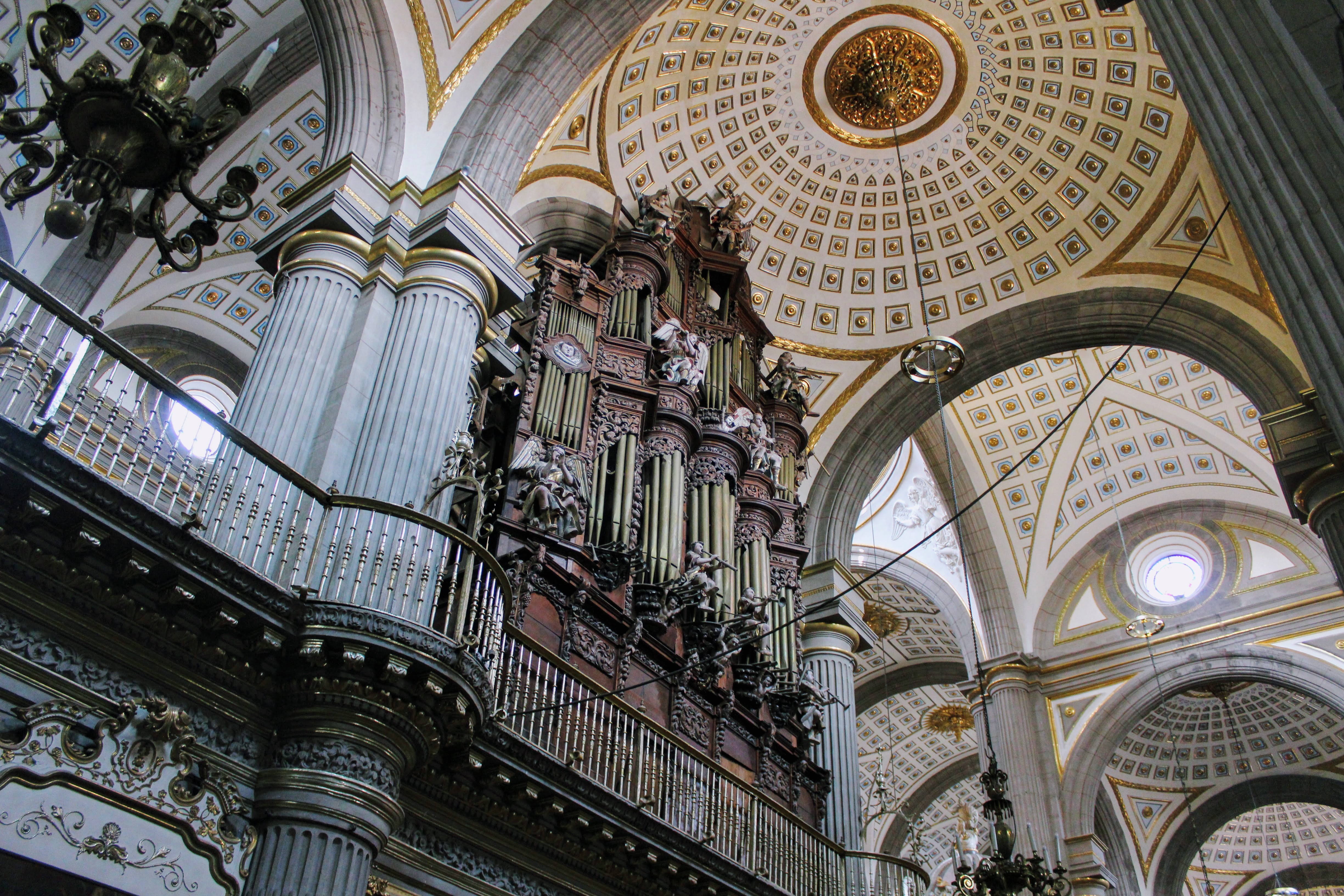 One block from Zocalo, the Temple of the Immaculate Conception looks like a fortress. 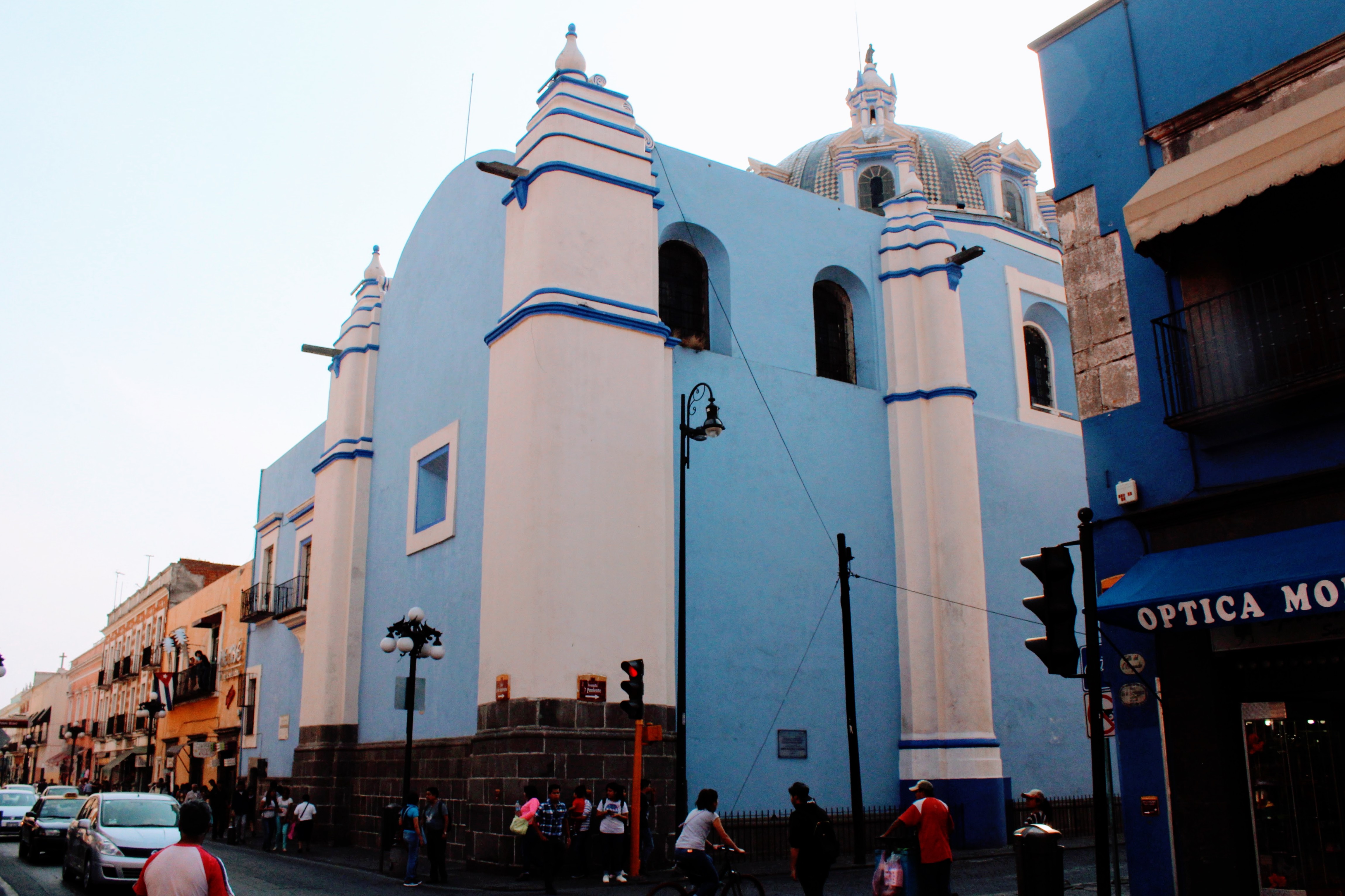 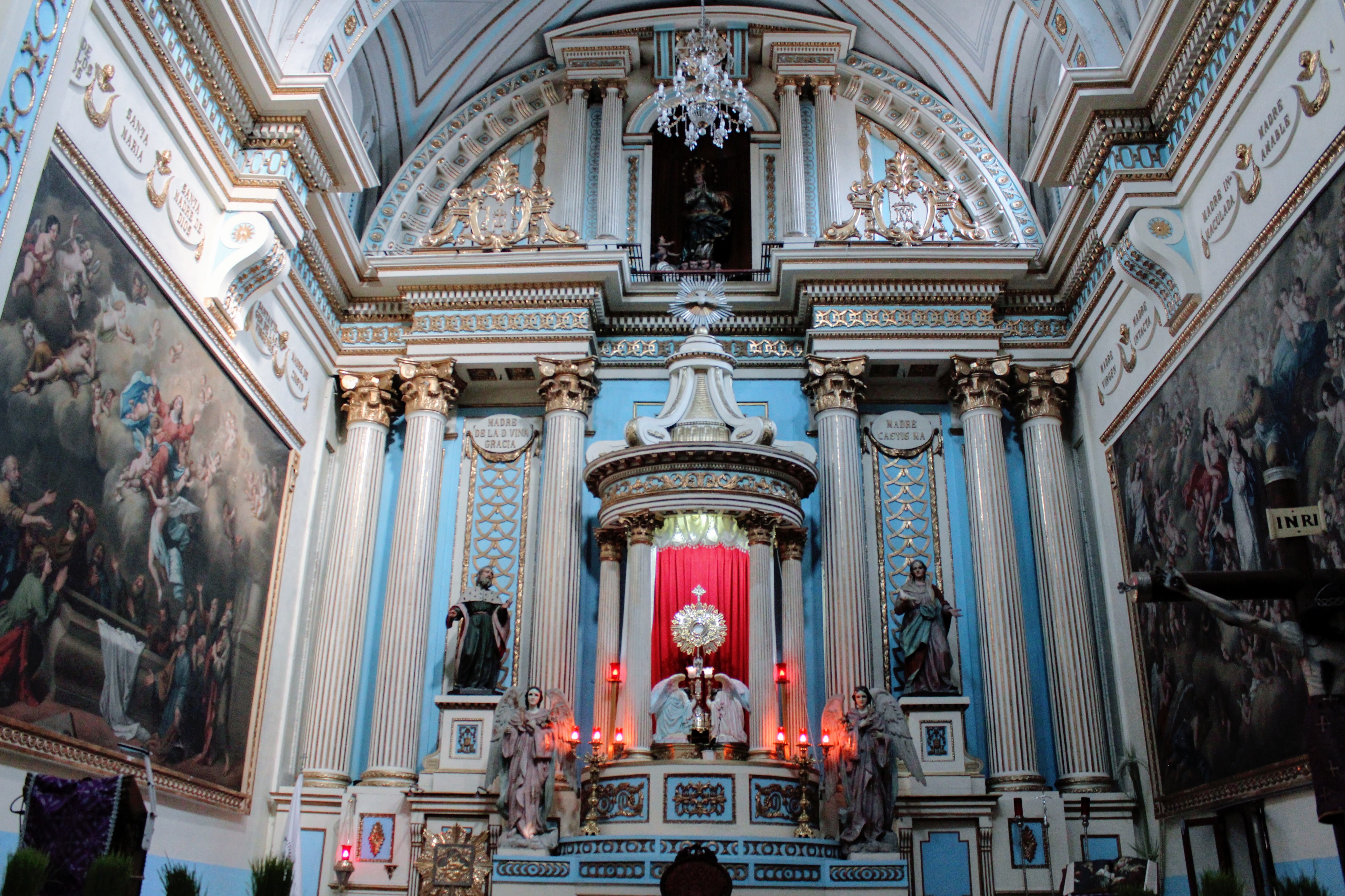 Baroque-style buttresses, those vertical columns which serve to reinforce the walls, are also the hallmark of the nearby La Compañia Templo del Espíritu Santo.

Hungry after crisscrossing the city center, we headed to Fonda Que Chula Es Puebla, a traditional poblano restaurant, one of many on Calle 6 Nte, especially between Av. Don Juan de Palafox y. Mendoza and Av 2 Ote. 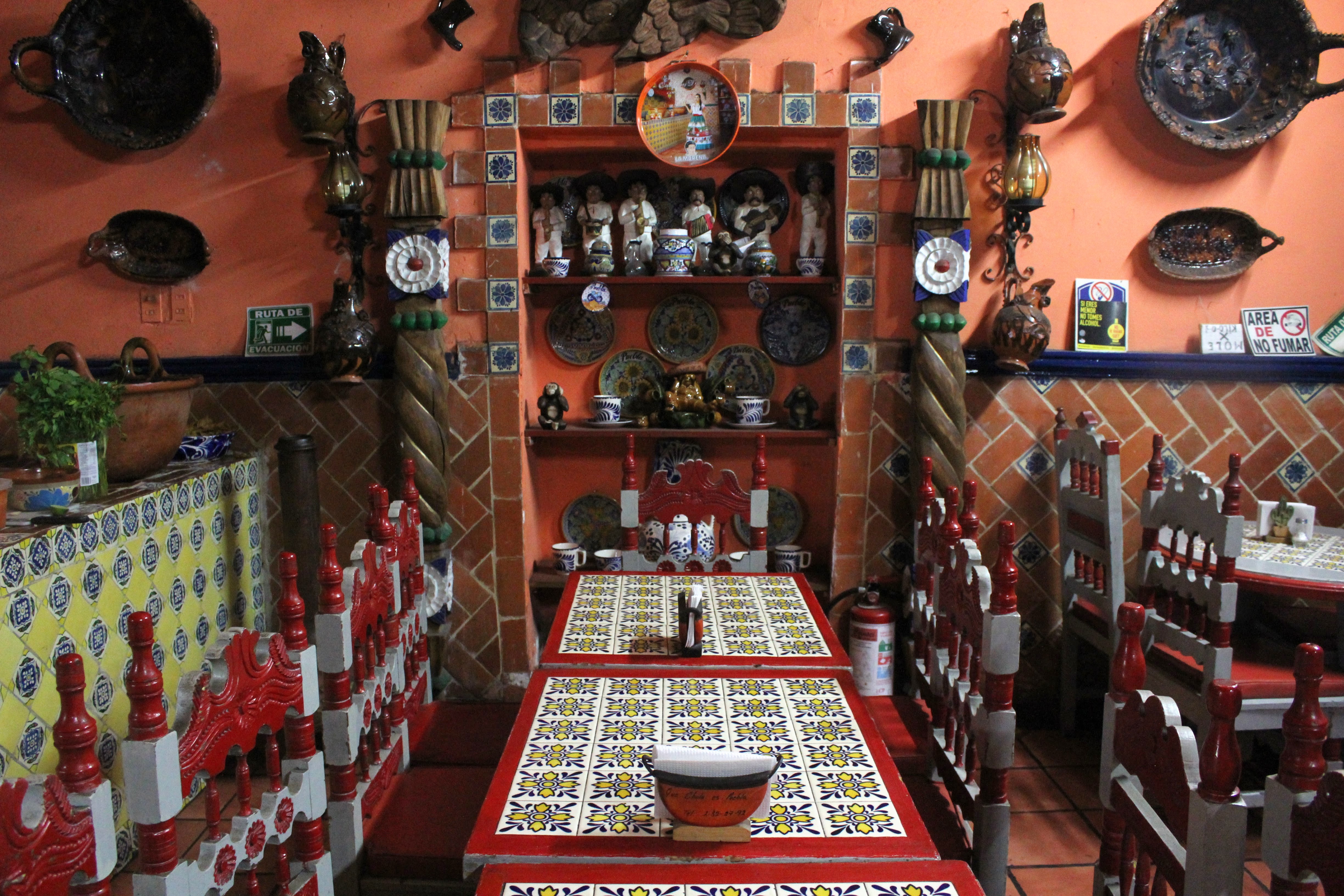 The walls and tables are decorated with Talavera tiles and plates, a pottery style for which Puebla is known. 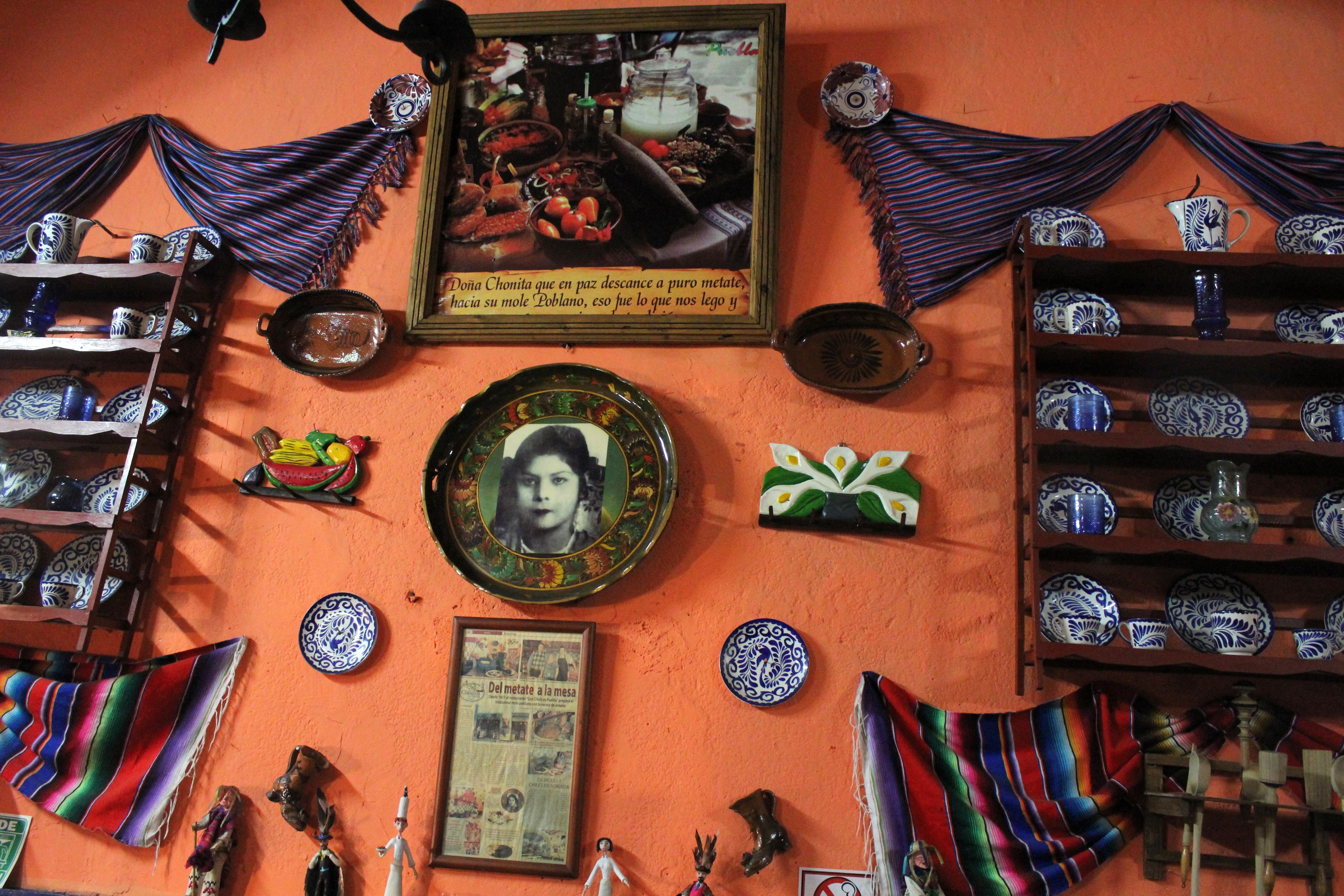 Tell any Mexican you went to Puebla and didn’t taste its mole, and he will shake his head with disbelief. A traditional sauce used widely in Mexican cuisine, mole comes in various flavors and ingredients, with chili peppers as the common factor. 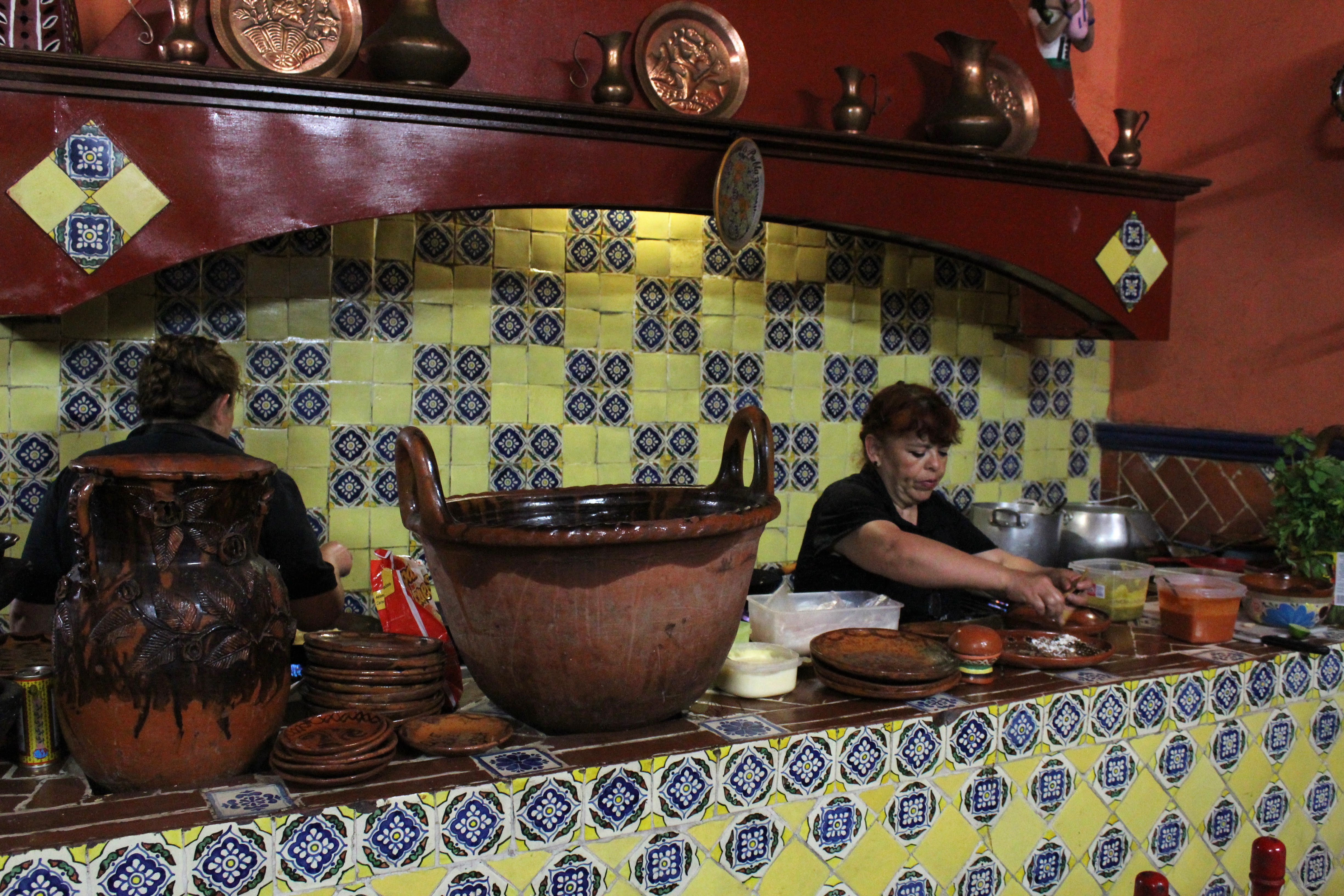 Puebla’s own mole poblano is the classic version of mole. It’s dark red or brown and served over meat. The dish has become a culinary symbol of Mexico’s mestizaje, mixed indigenous and European heritage.

A legend tells of Puebla’s bishop, whose plan to visit the Convent of Santa Clara took nuns by surprise. With very little money to spend, the nuns prayed and brought together the little bits of what they did have, including chili peppers, spices, day-old bread, nuts, and a little chocolate. They killed an old turkey, cooked it and put the sauce on top; the archbishop loved it. When one of the nuns was asked the name of the dish, she replied, “I made a mole.” Mole was the Nahua word for mix.

After the meal we still had time to visit the local market. 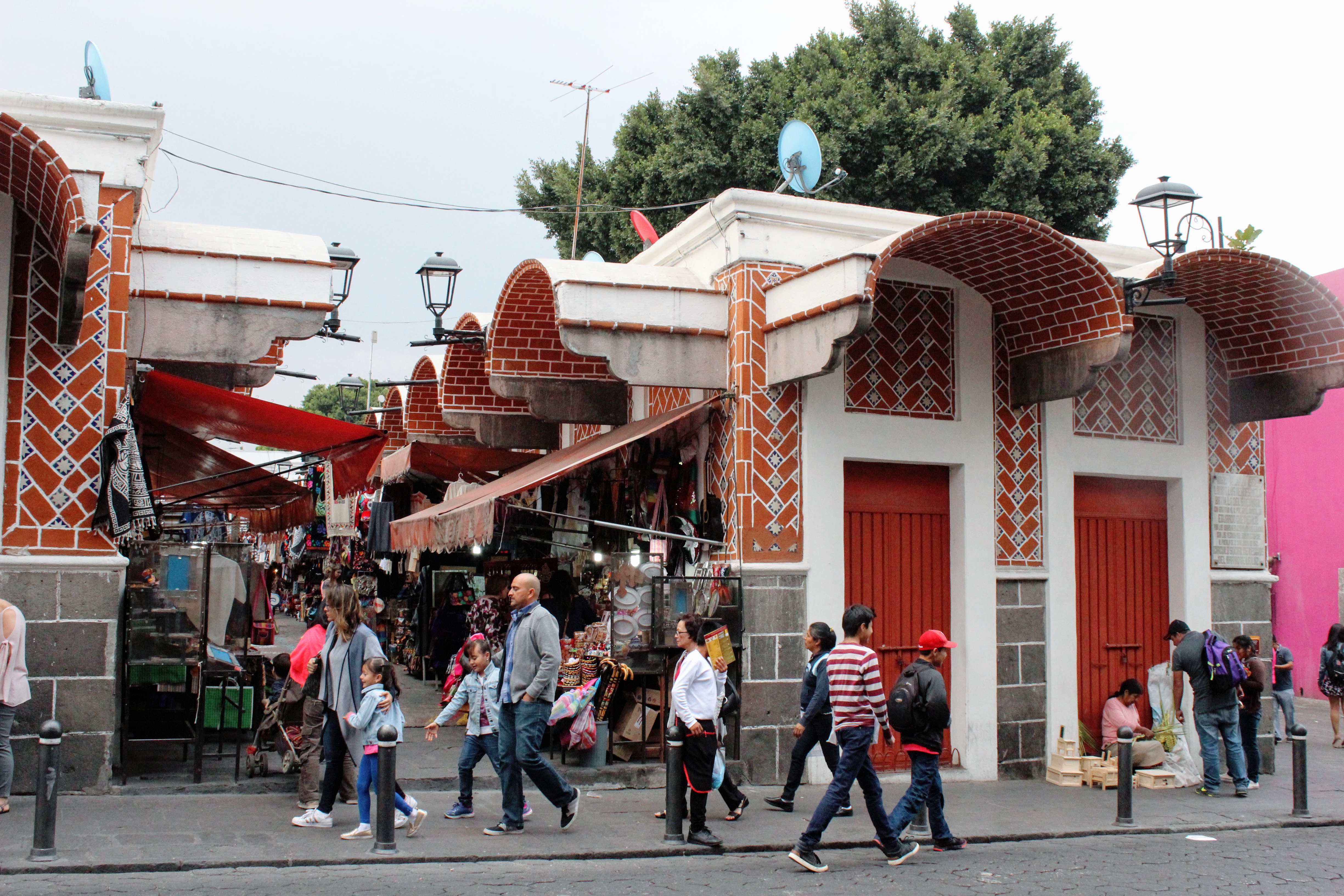 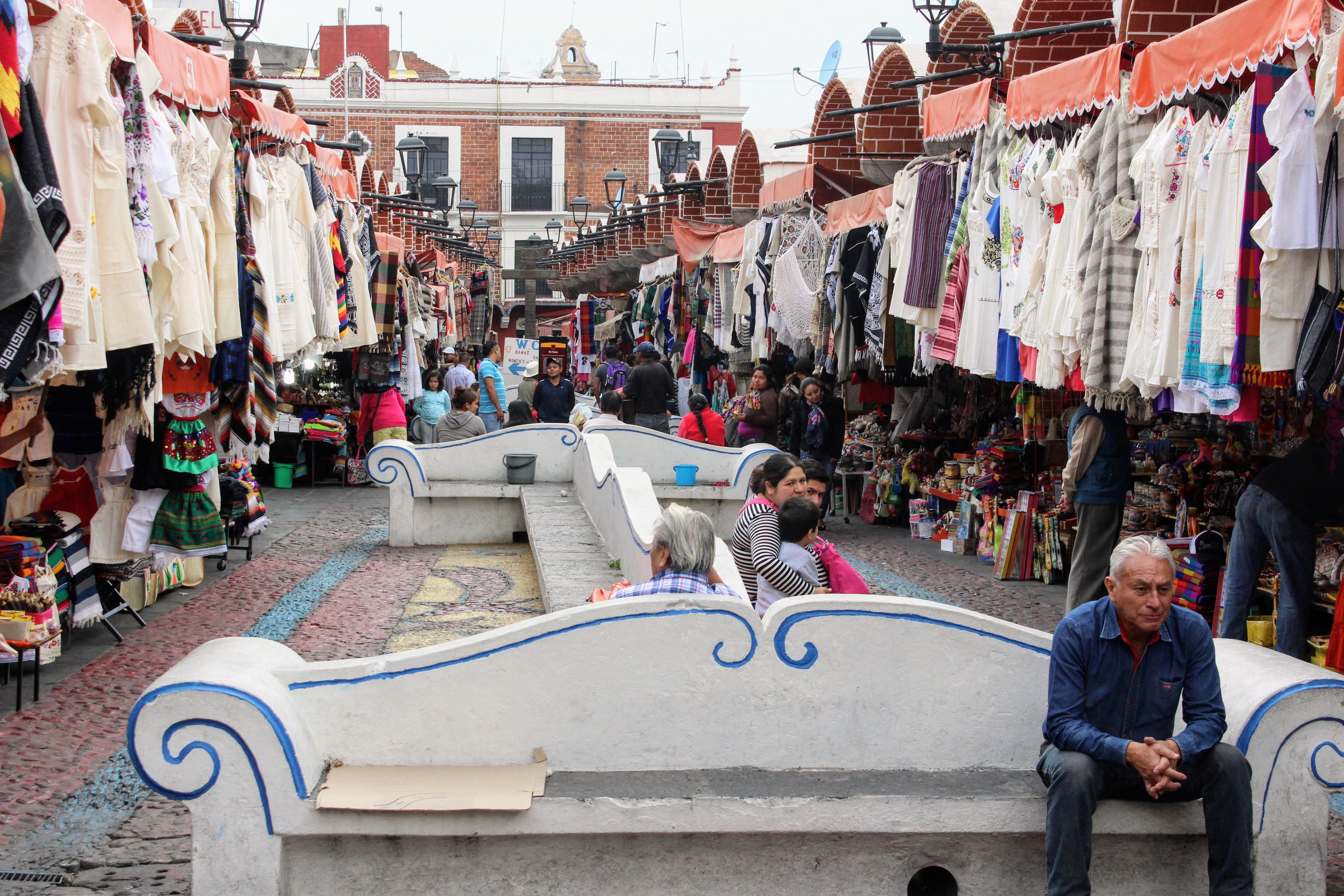 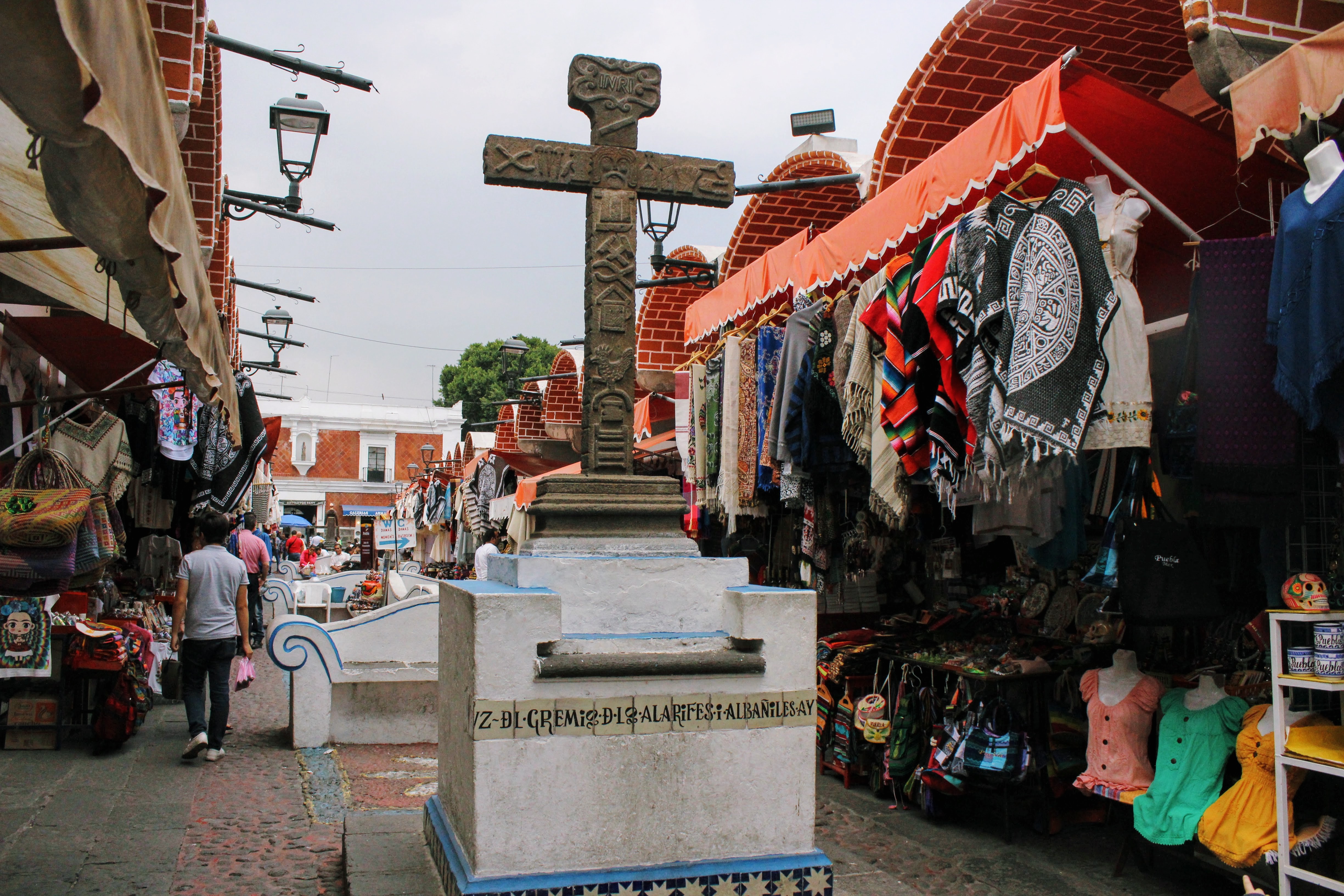 It’s not a tourist trap. Locals come here to buy just as well as sell. 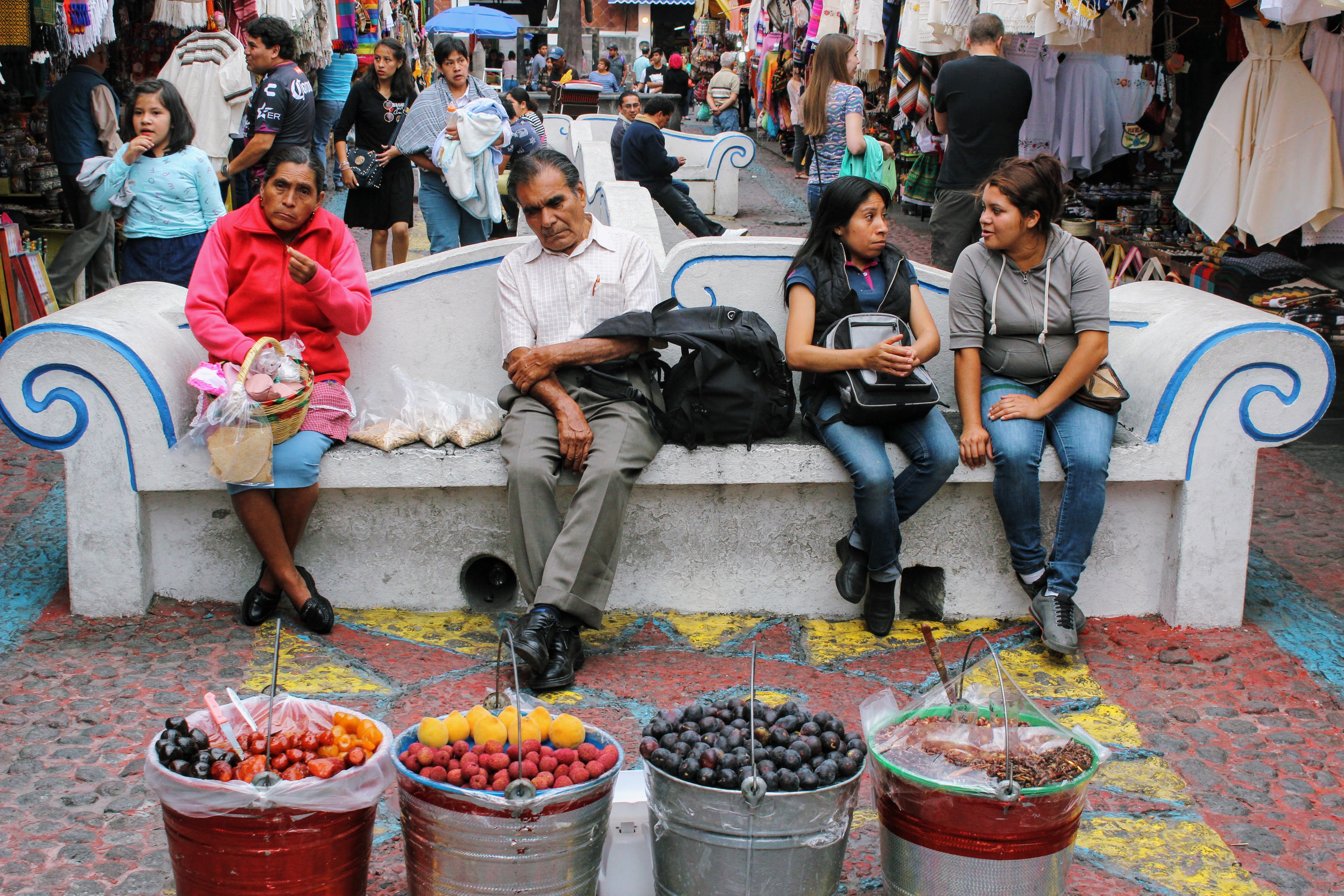 We left the market when the sun was setting over the city. Like the mole, Puebla is a mix of surprising ingredients.