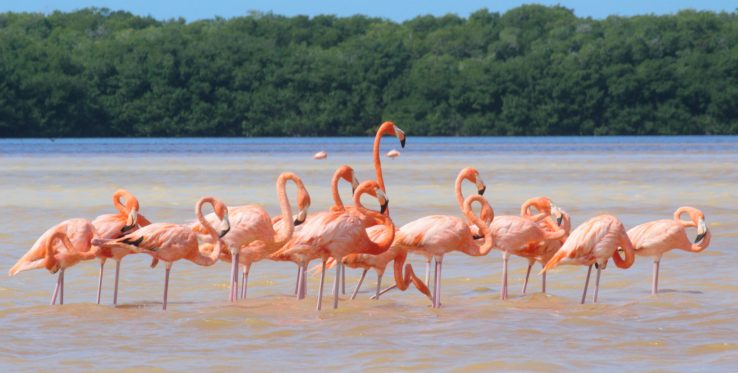 On our last weekend before leaving Yucatan, we took a bus from Merida to Celestun, to visit the Celestun Biosphere Reserve, where flocks of pink flamingos come for the winter. While every hostel and tour agency offers a tour to Celestun, there is really no reason to take them. These tours are usually pricey, and don’t offer anything of extra value. Instead, we took a regular bus from the Noreste bus station in the center of Merida, where the buses leave every hour. 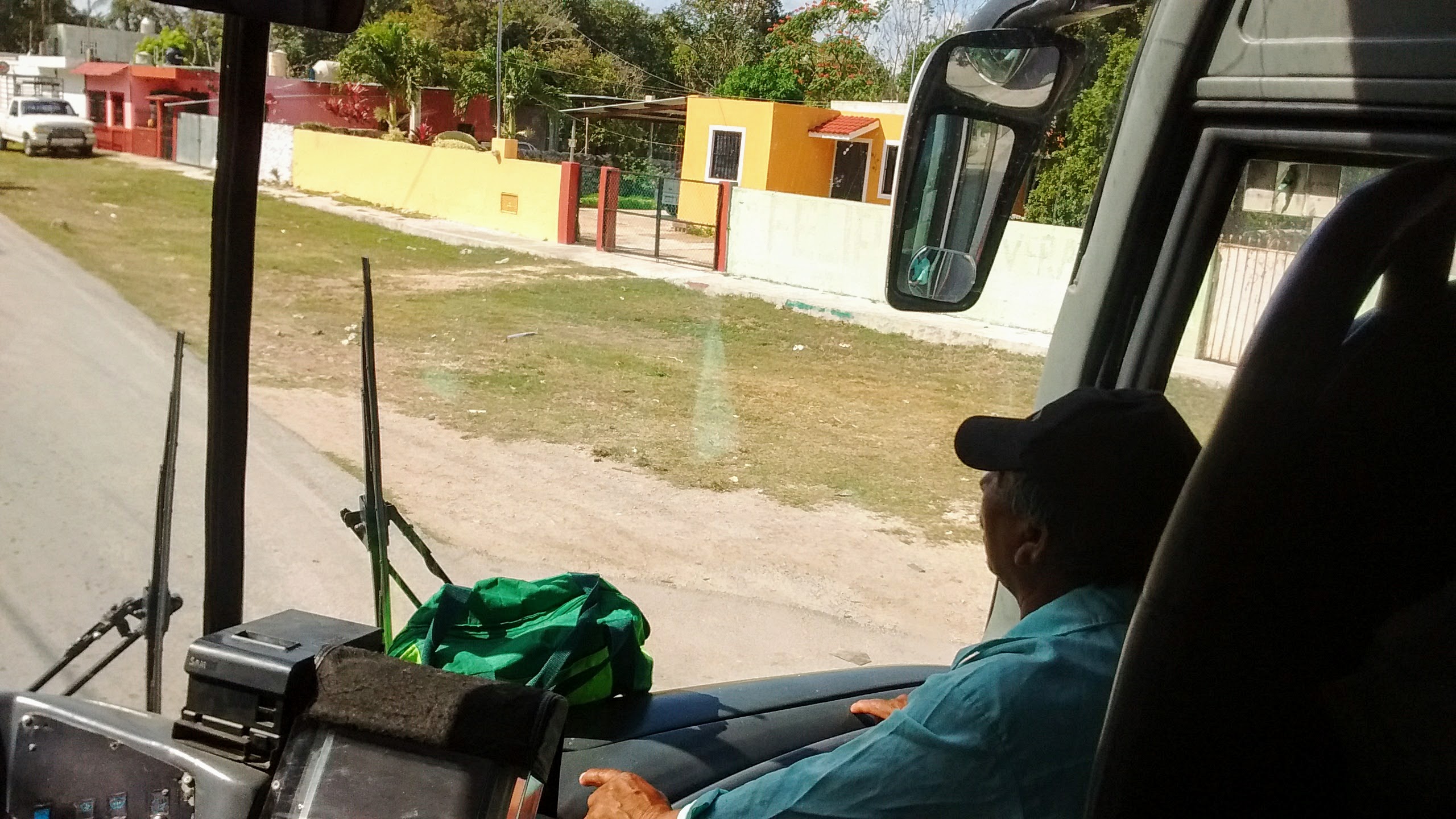 After a 2 hour trip, entertained by a passenger and a driver taking turns in singing mariachi favorites, we left the bus just after the bridge, near the Parador Turístico Celestún. There we found 2 other couples looking to do the boat tour, and together we shared a 6-person motor boat.

The shallow waters of Ria Celestun are of reddish hue, as if to prepare you for the main show. 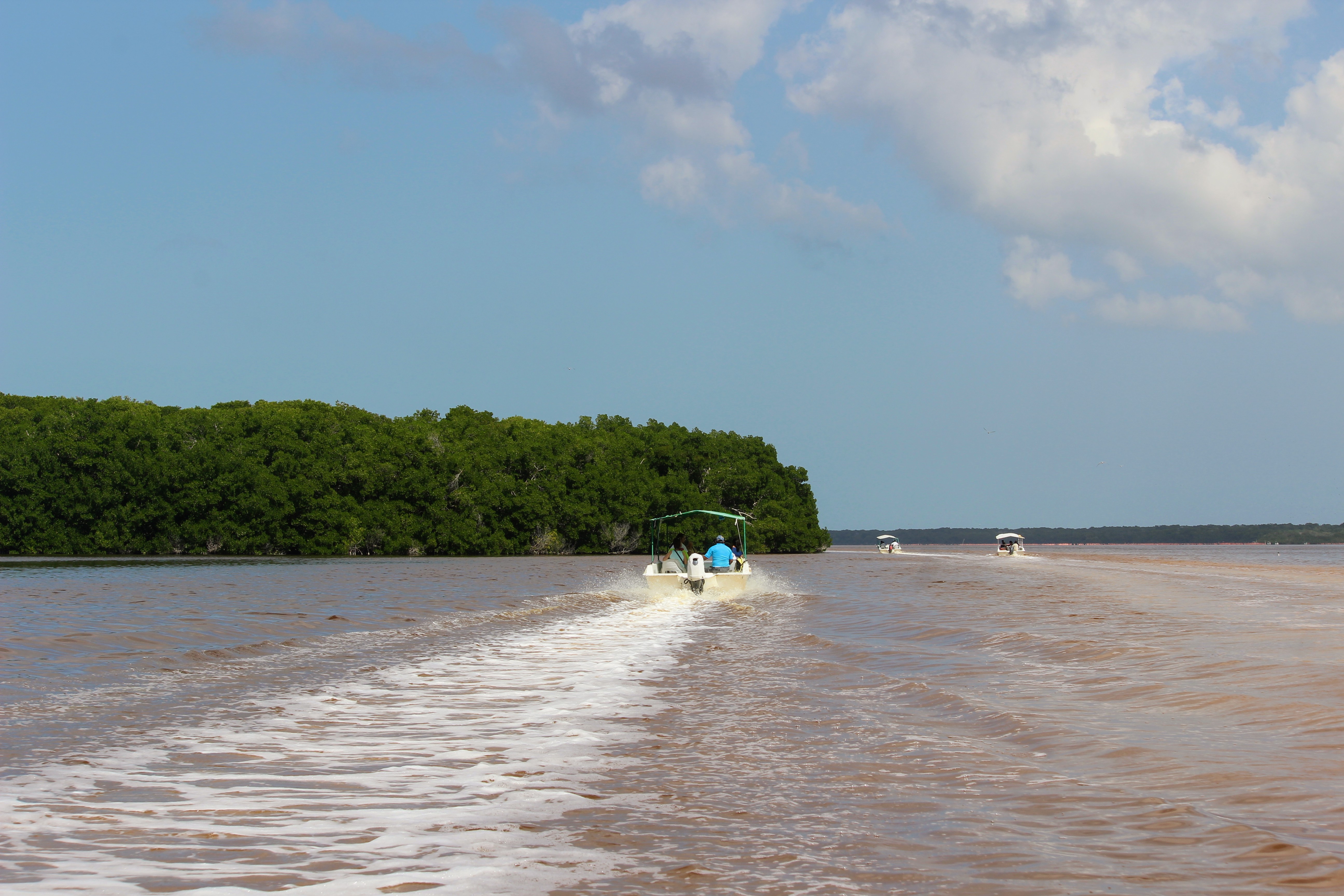 Seeing the red dotted line of the flamingo colony for the first time is breathtaking. 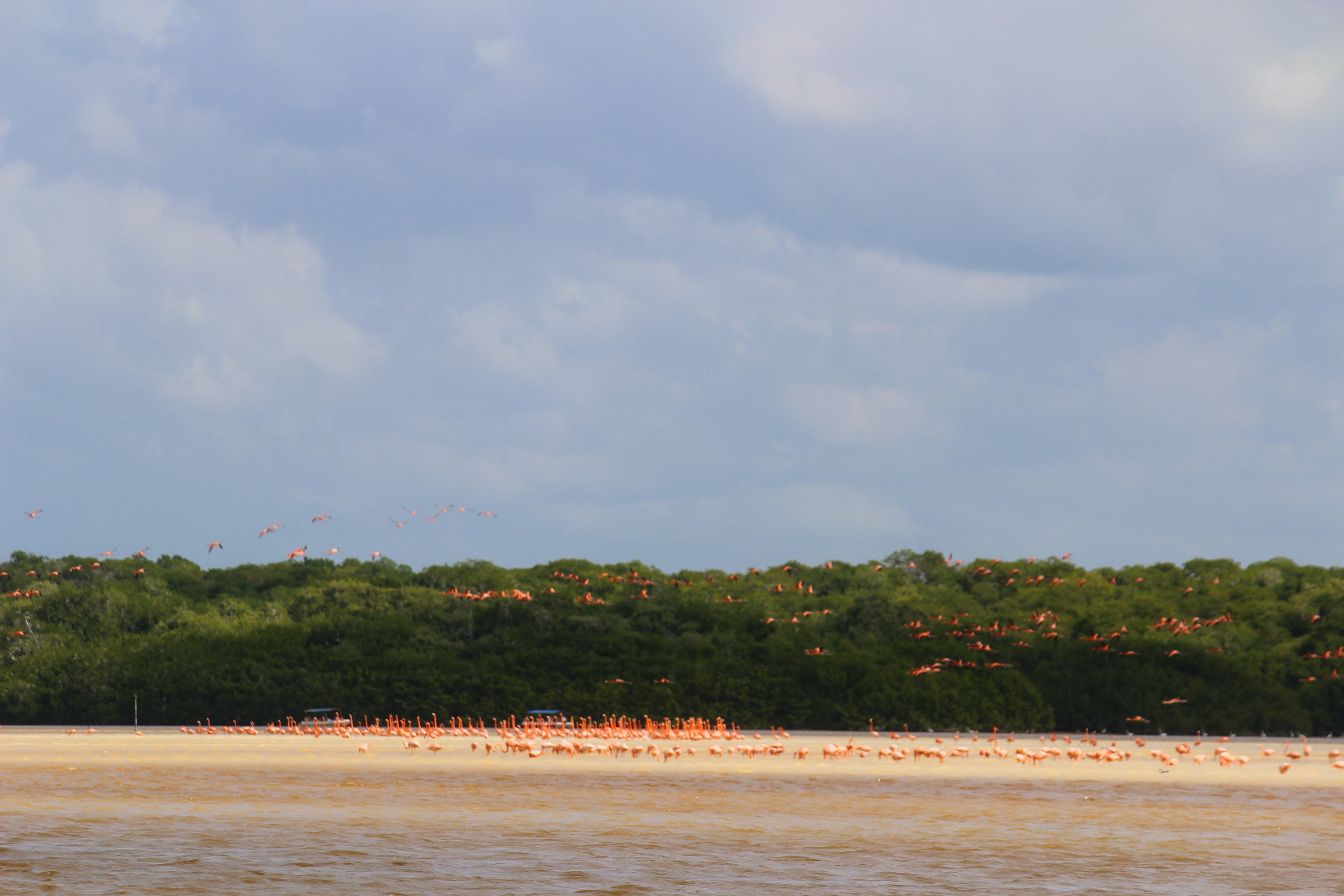 Celestun’s colony numbers between 10,000 and 18,000 flamingos, making it one of the Western Hemisphere’s largest flocks. 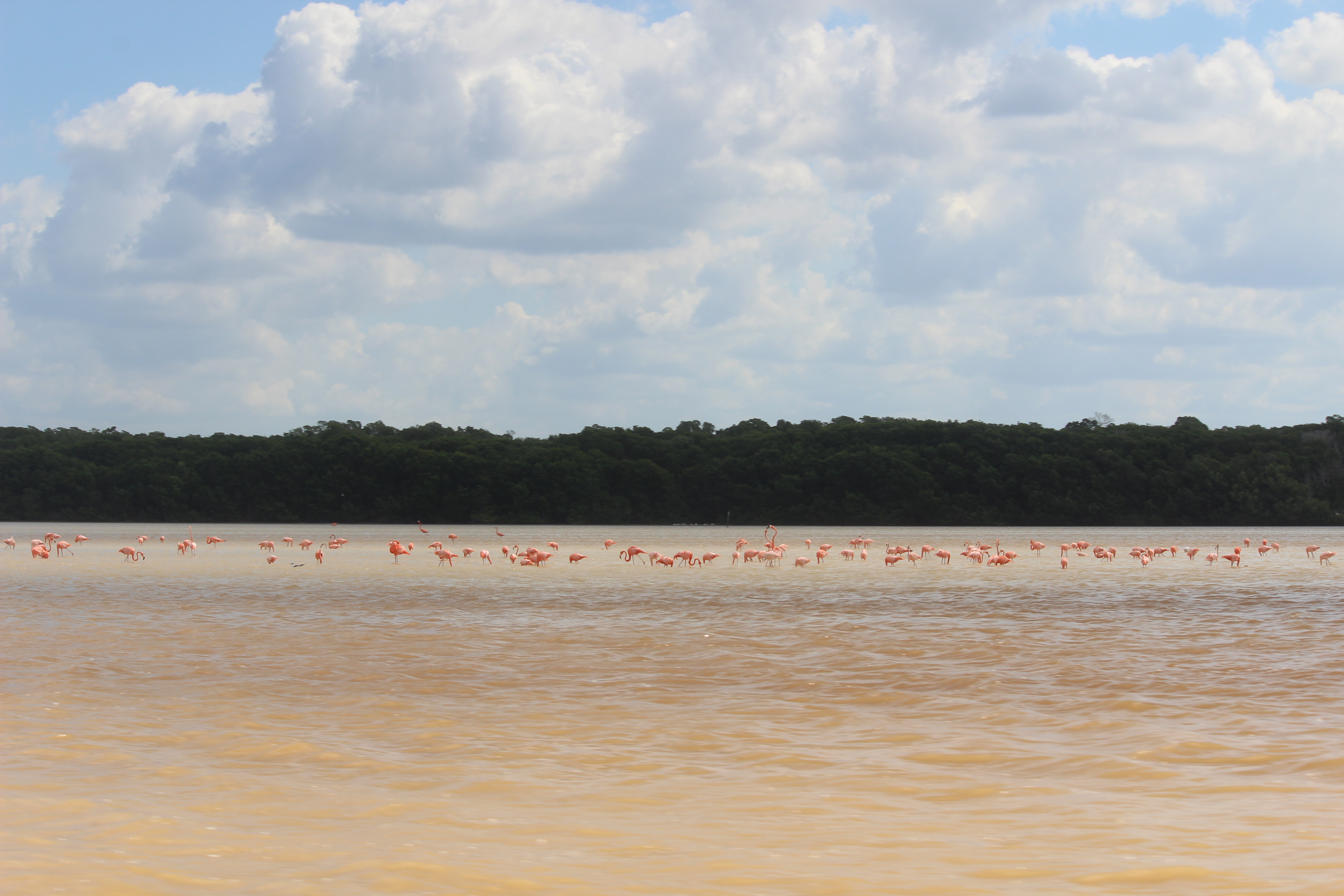 The pink or reddish color of flamingos comes from carotenoids in their diet of animal and plant plankton. If beta carotene is reduced or eliminated from a flamingo’s diet, that pink color fades to nearly white. 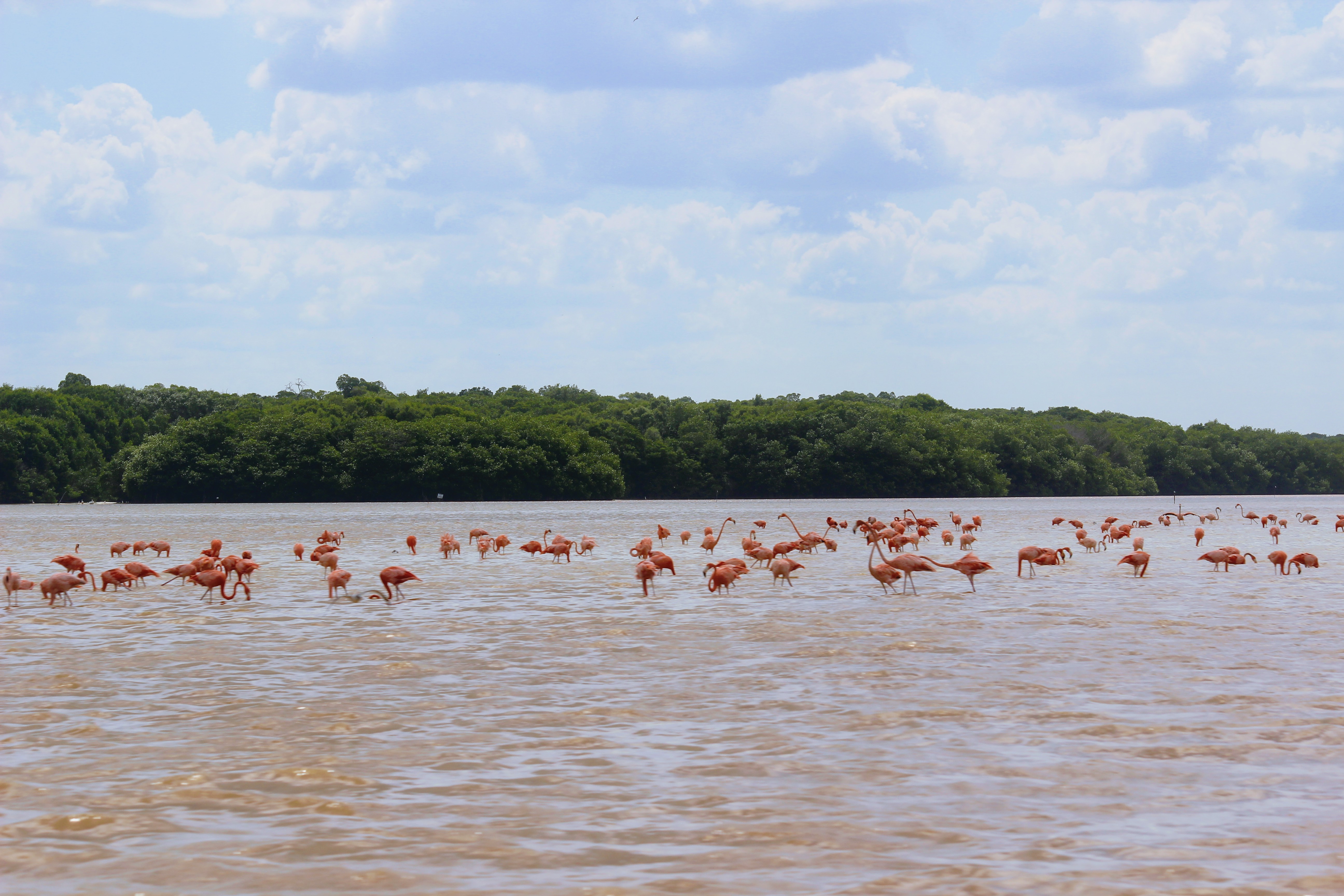 They need to spend 12 hours a day eating to get all the food they need. 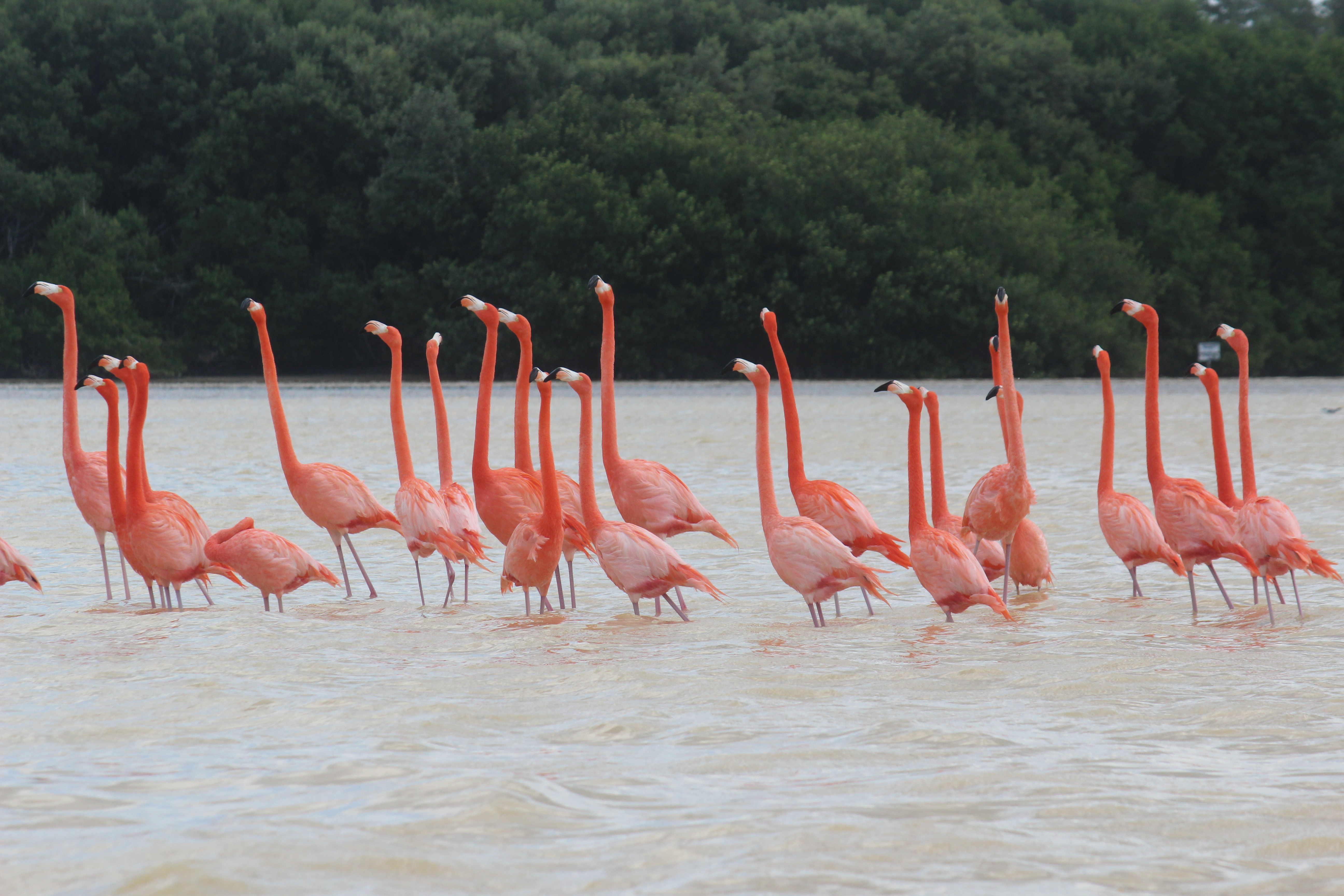 Flamingos stay together as a big group, which is one reason why seeing them is so impressive. Their thin legs and question mark necks are unmistakable. 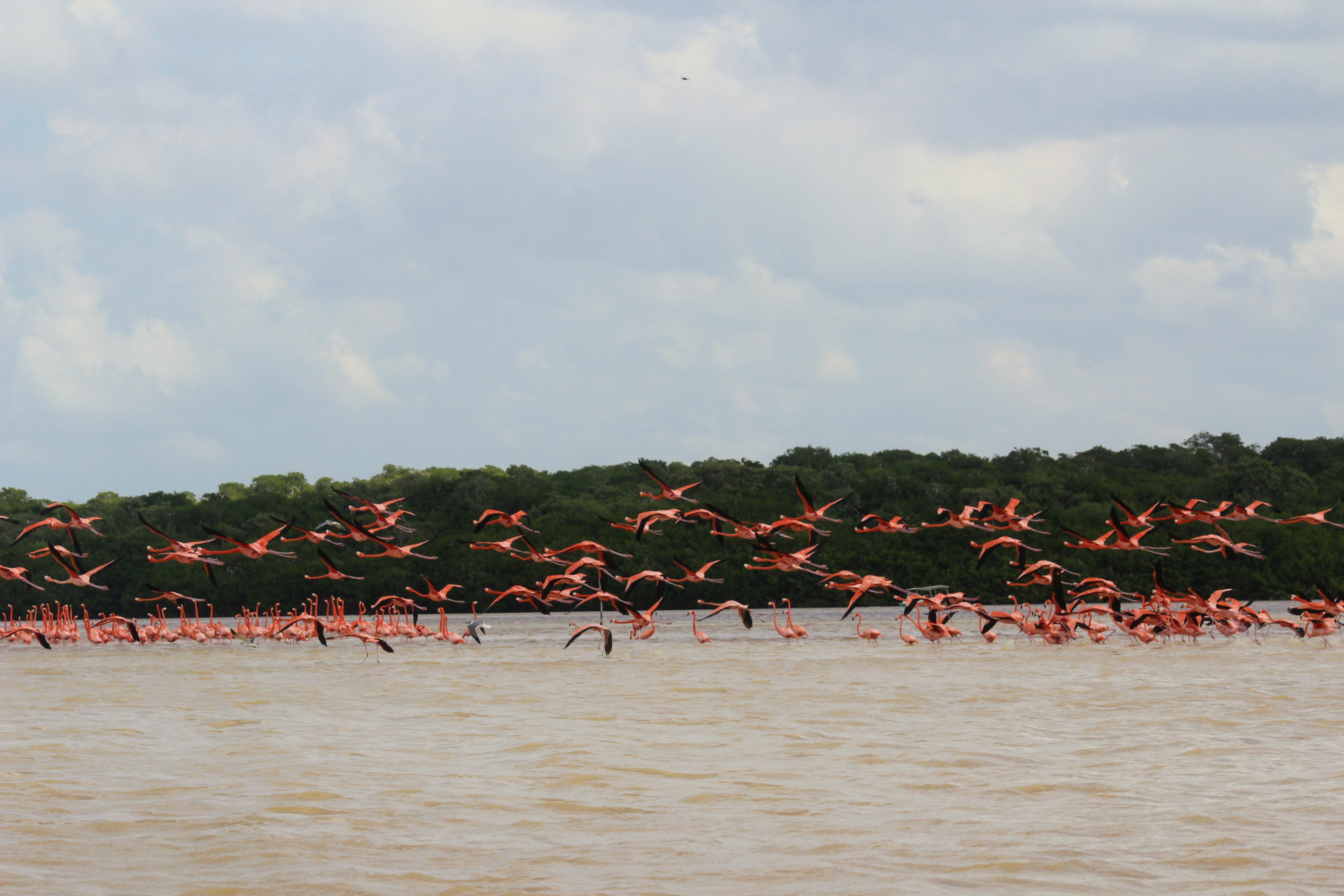 It’s only when flamingos open their wings, you can see the beautiful black that decorates their edges. 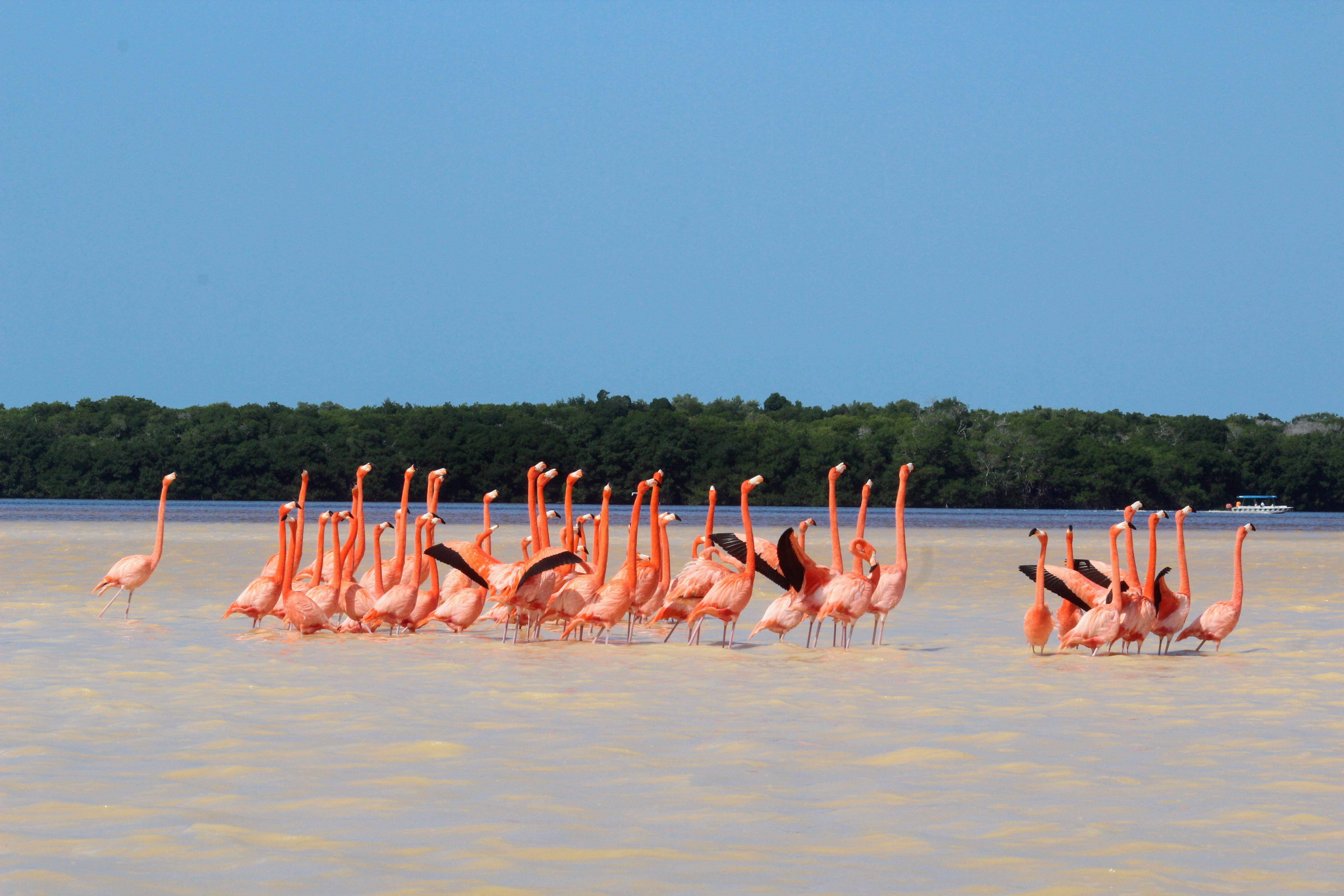 The boats aren’t allowed to come near those majestic creatures so as not to disturb them, so make sure to bring a telescopic lenses with you. 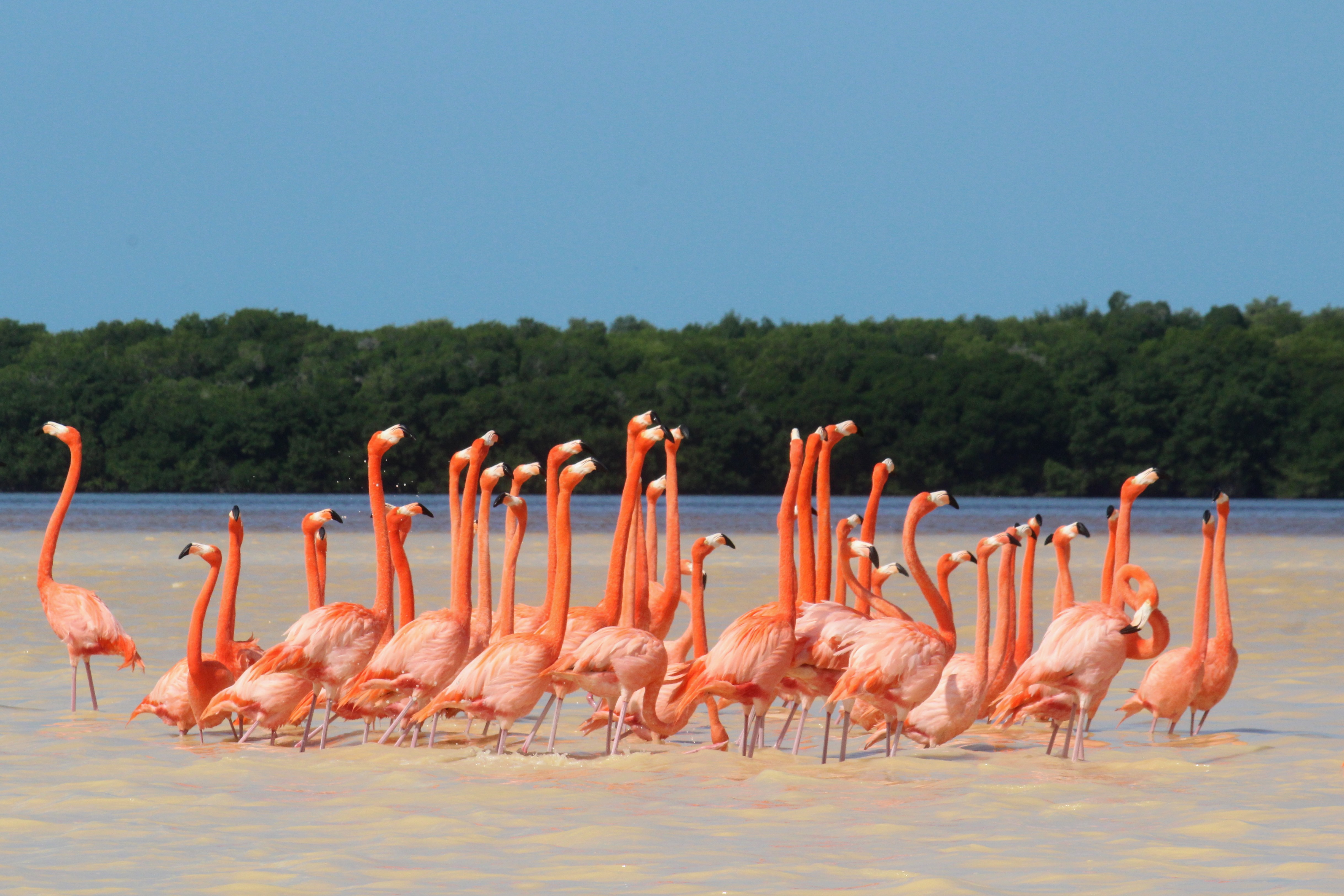 Flamingos like it here because it’s a coastal lagoon and the water is shallow and saline. 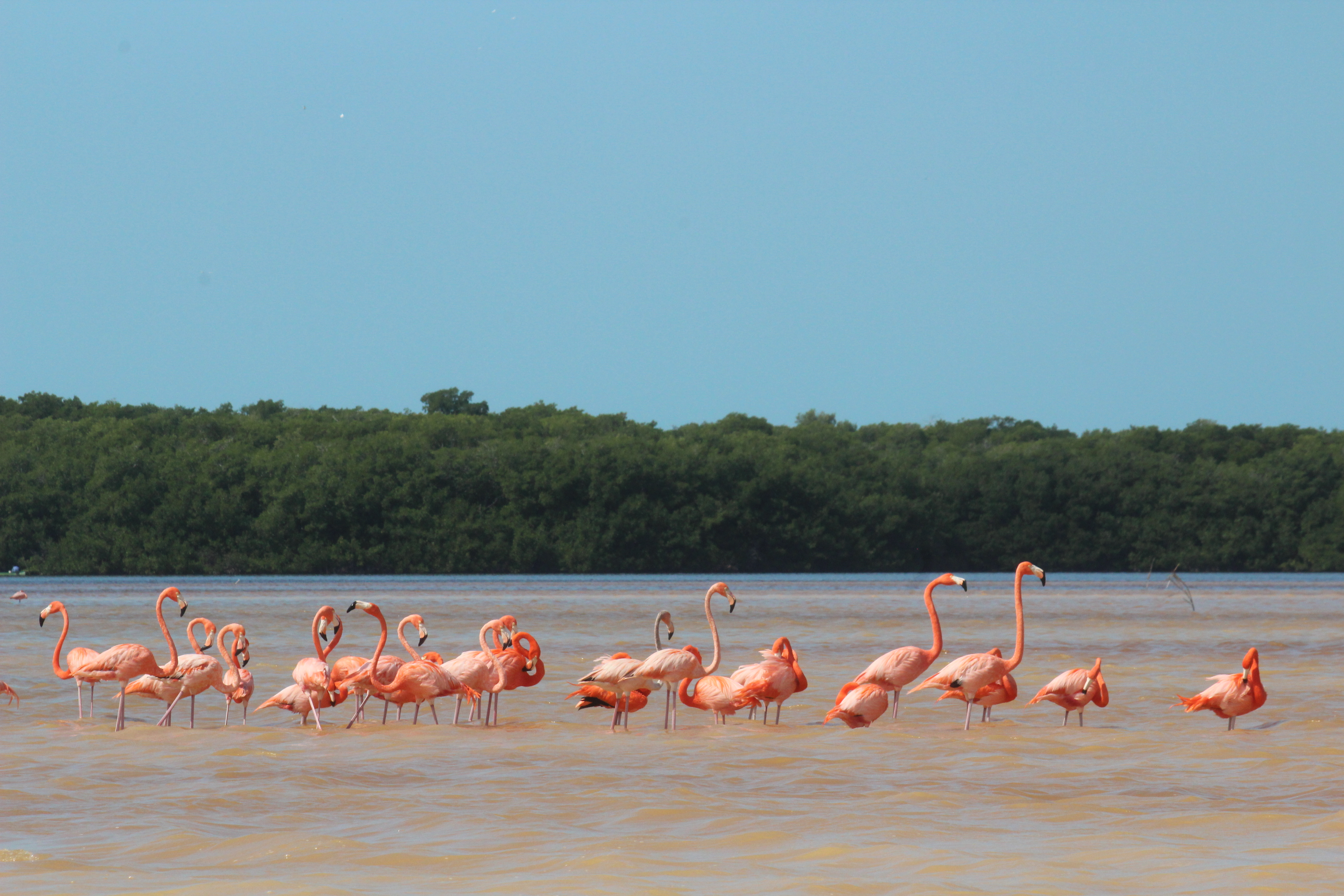 I wish we could stay longer in their company, but after a 20 minute drift with the engine turned off, we had to continue. 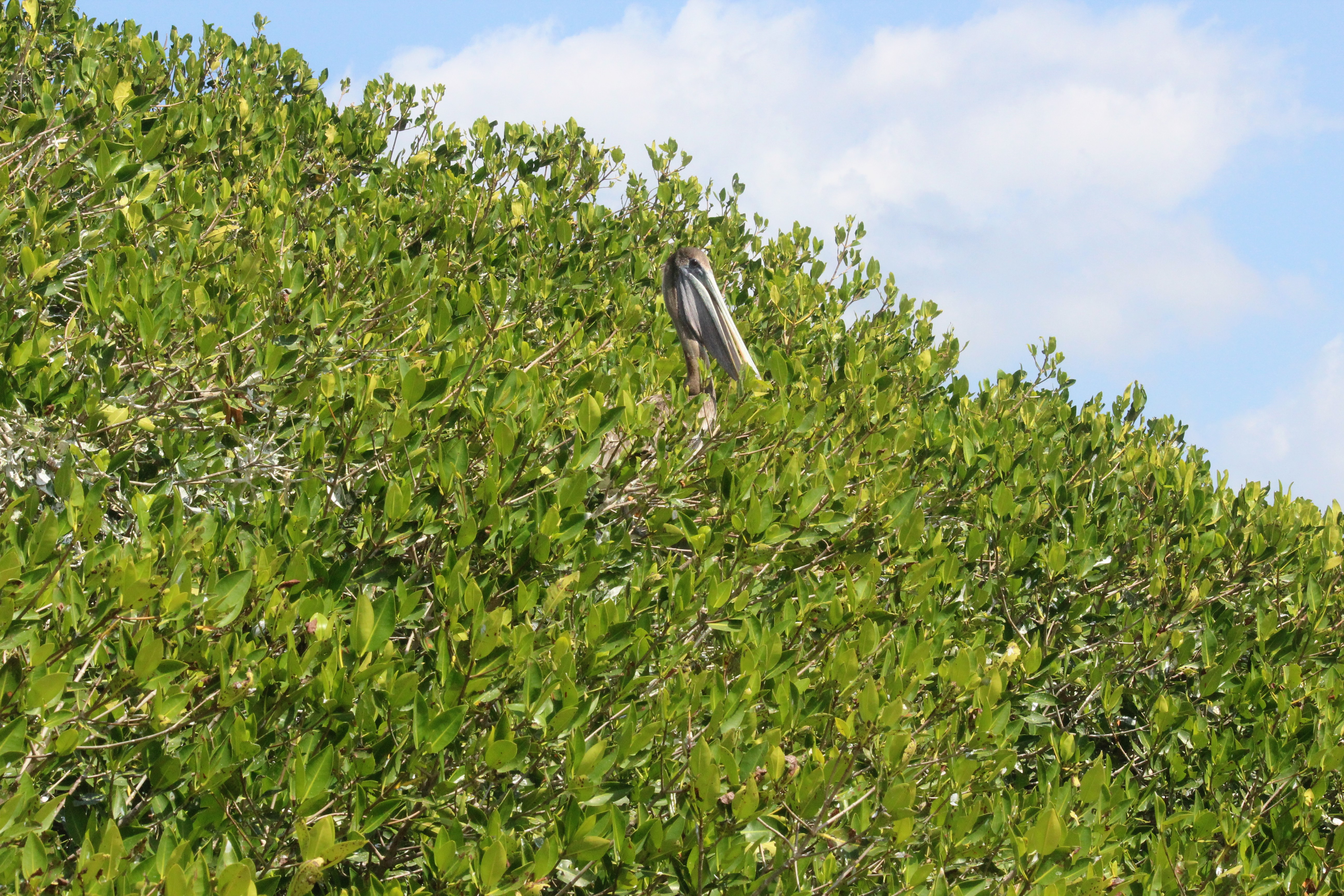 In the trees on the banks of the lagoon, a solitary figure of large pelicans looked strikingly individualistic. Aside from flamingos, Ria Celestun is also home for a large number of other migratory birds, such as herons and pelicans.

Soon the boat swerved off into the undergrowth of the surrounding mangrove forest. Here, lagoon’s saltwater that comes from the Gulf of Mexico gives away to the freshwater from springs and small underground lakes known as cenotes. 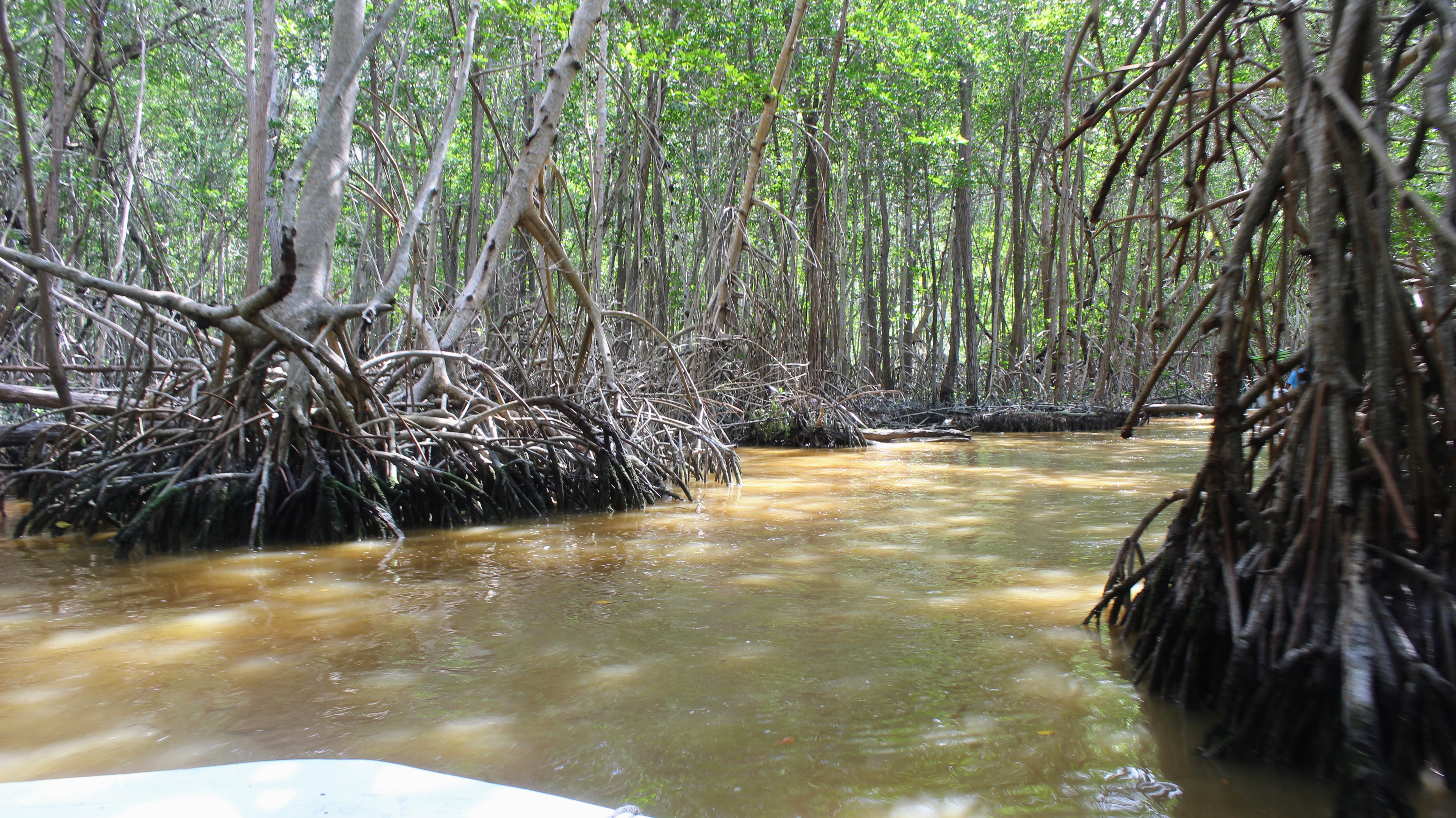 After the wide-open water of the estuary, the mangrove forest feels eerie. 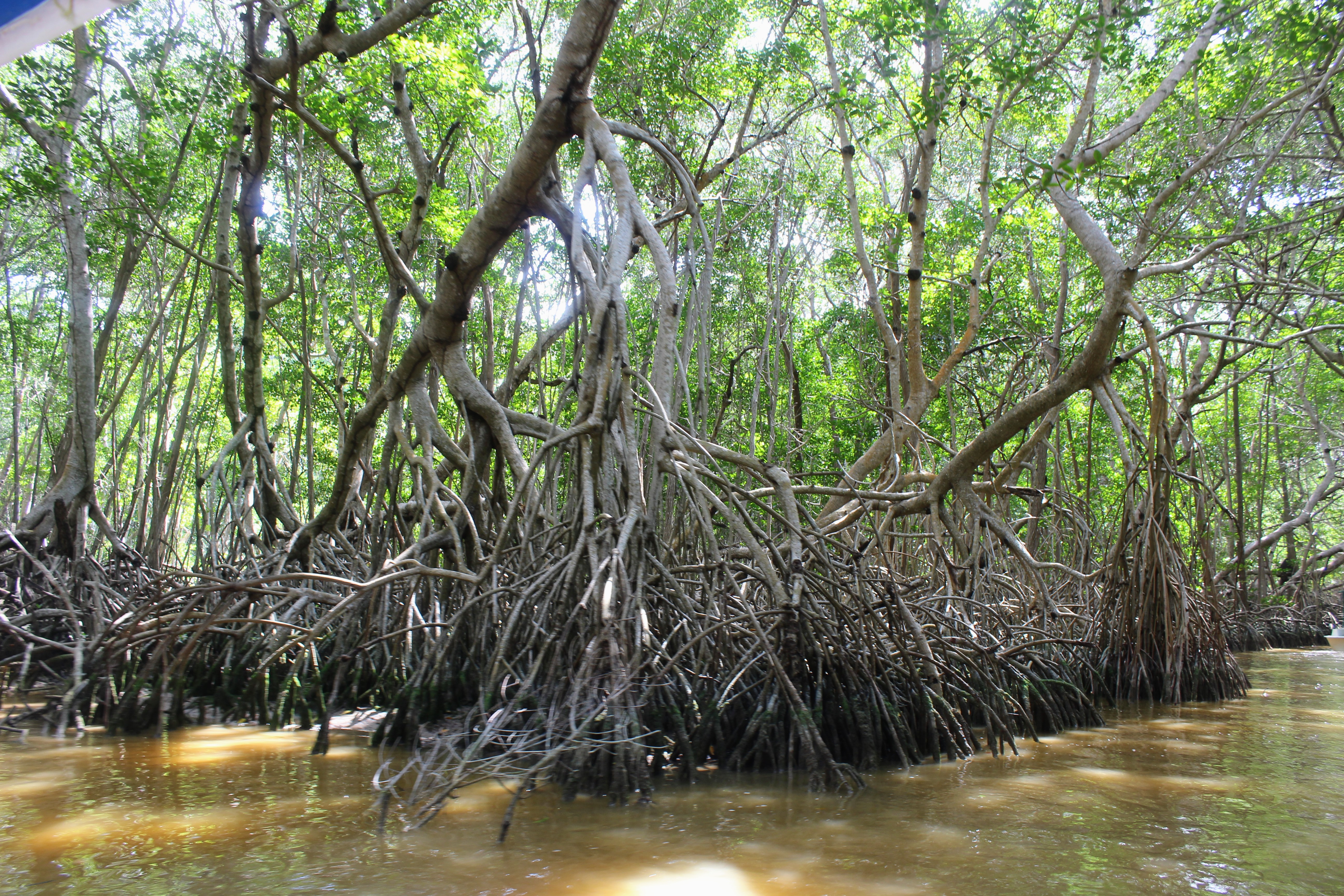 Mangroves have evolved to survive in flooded coastal environments. And the forest does look like a scene of a major flood.

The crystal-clear spring water looked inviting, and some visitors were indeed dipping in it. 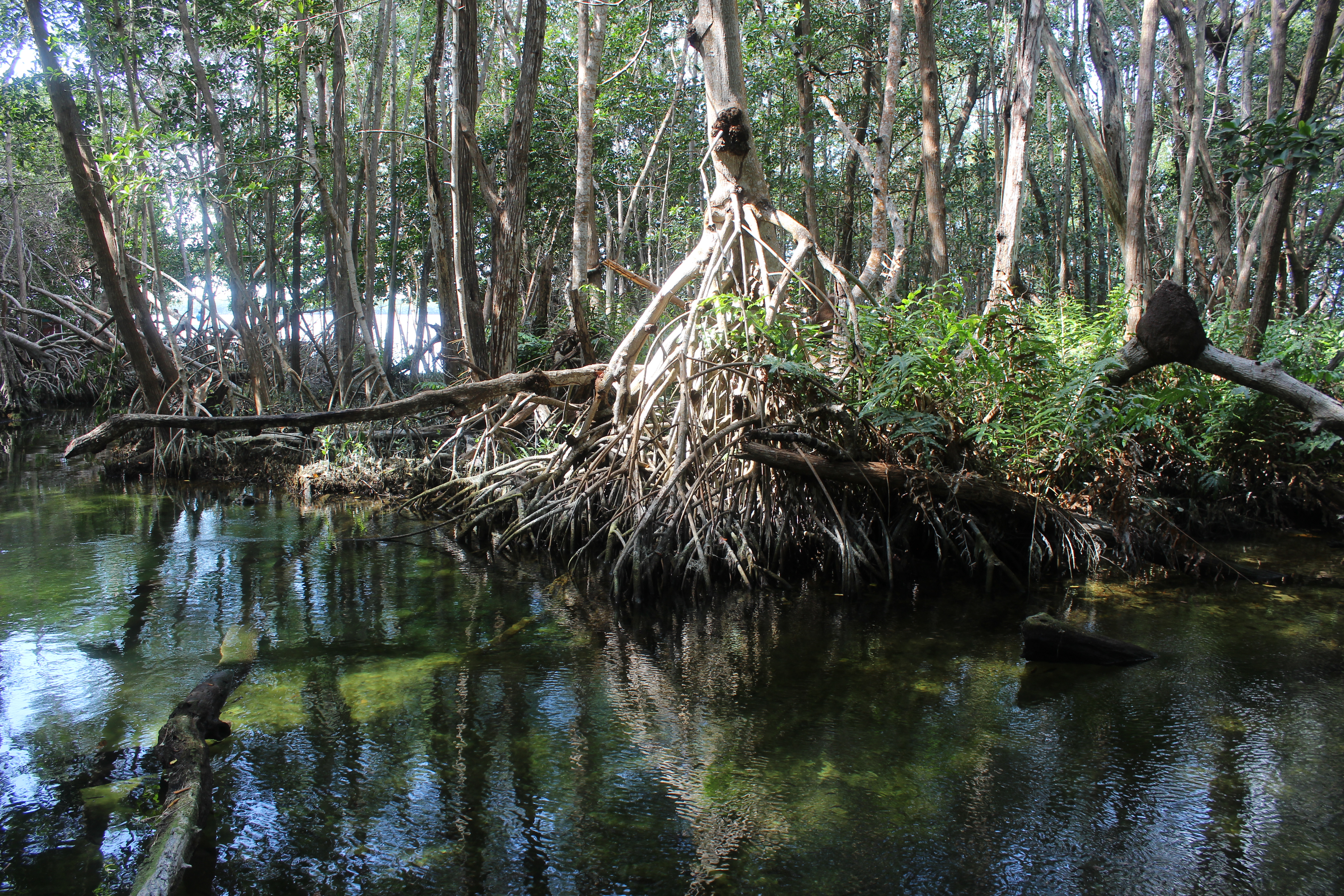 A raised walkway through the forest, built by the park authorities, allows you to leave the boat and wander through the trees. 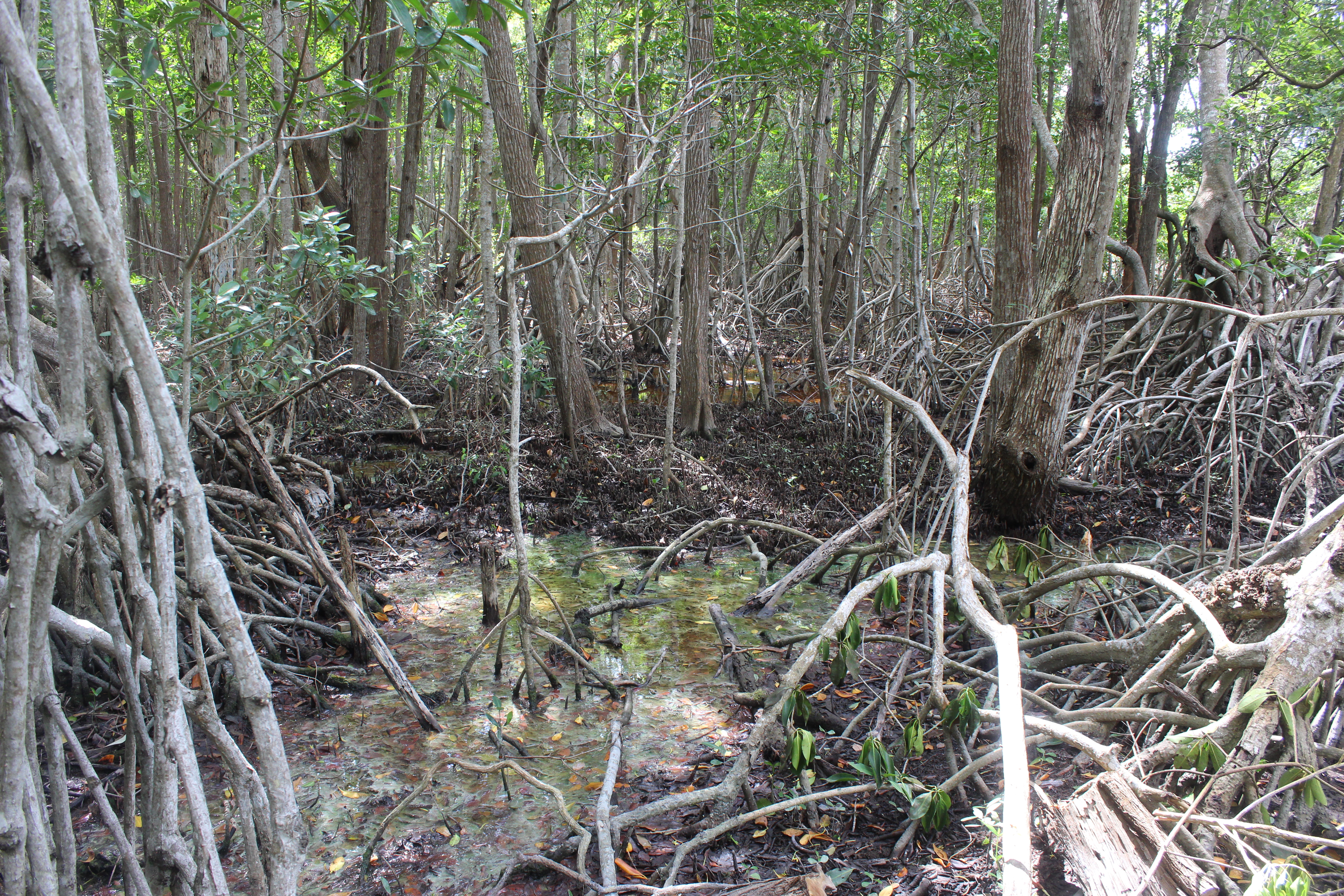 Soon, too soon to my liking, the tour was over. I would have gladly done it again the same day, if I was alone. As our boat was speeding back through Ria Celestun, I realized that too busy with the camera, I didn’t really take in the views. 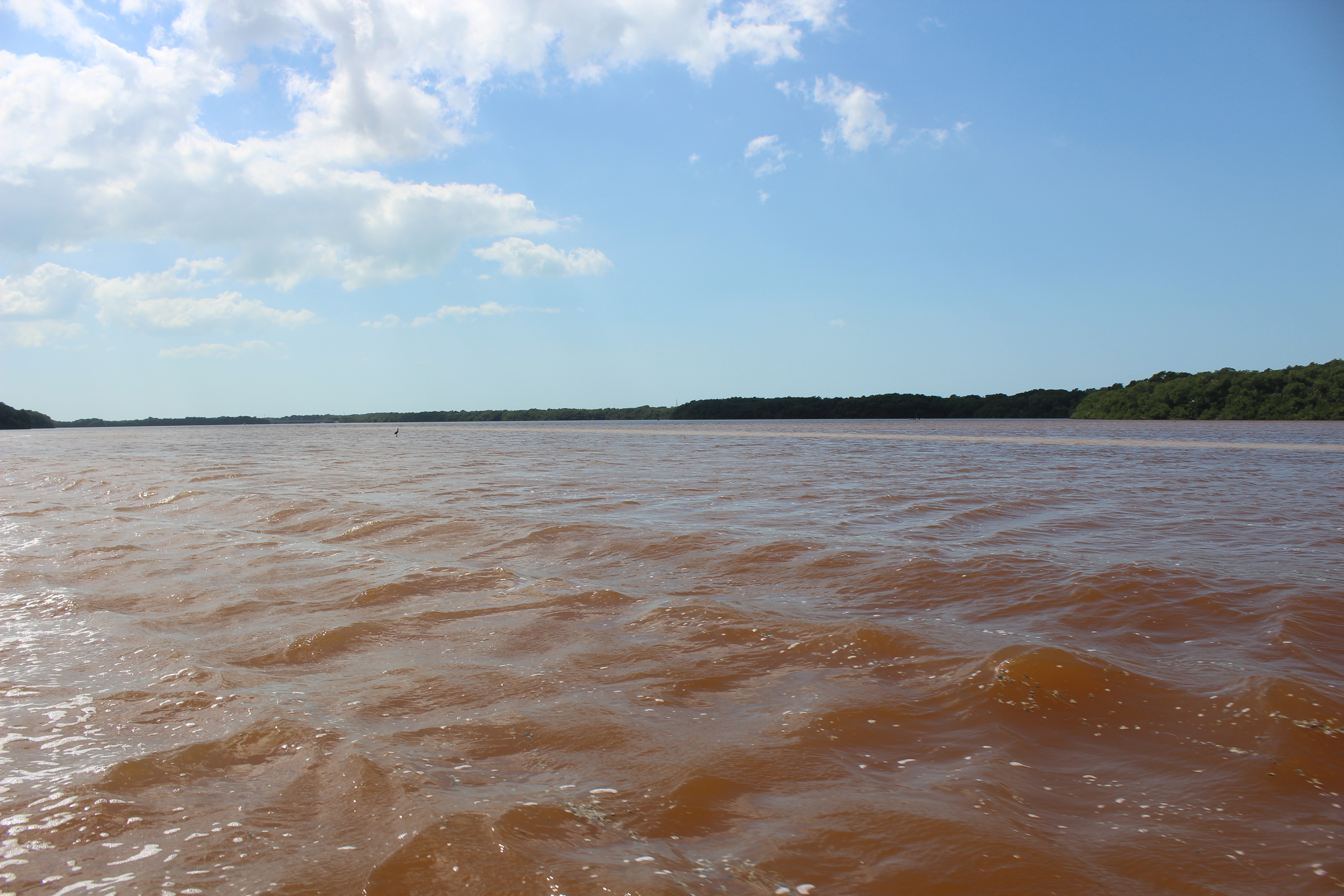 A short mototaxi drive from the docks took us to the center of Celestun, a sleepy nearby town. Celestun remains relatively isolated, due in part to its location inside the borders of the Celestun Wildlife biosphere reserve, which limits its development.

My only memory from the town is the frozen, sad grimace on the face of the owner of the restaurant where we had lunch. A framed, black and white portrait of a young man on one of the walls was telling a story of a grieving father.

With nothing much to do in the town, we caught the next bus to Merida. Our last weekend in Yucatan was coming to an end with unforgettable splash of colour.