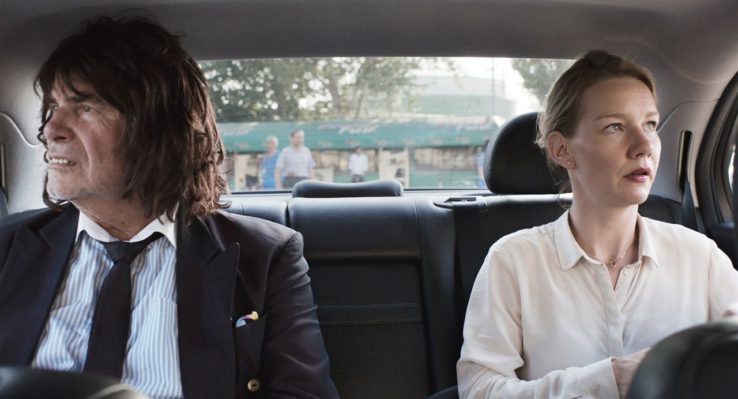 Without a background music, violence or complex plot, Toni Erdmann, a 2.5 hours German movie from 2016, relies solely on acting, character building and dialogue to keep our attention. And keeping attention it does – I didn’t register a single boring moment in the movie. If you like Dogme 95 movies (which I do), you’ll know more or less what to expect.

The main protagonists are Winfried, an older man with a particular affection for practical jokes, working half-time as a music teacher, and Ines, his estranged daughter, working for a consulting company, spending most of her time abroad. When she arrives for a short visit home, he visits her in her mother’s house. Even though they are happy to see each other, they hardly have enough time to exchange a few words (she spends most of her time on the phone). And it looks like they don’t know exactly what to talk about. The girl with whom he used to play and fool around is now wearing suits, high heels, and flies business class.

After she leaves to Romania the next morning and his old dog dies, he spontaneously takes a flight to Bucharest to try to reconnect with her. But a short time together in a hotel in Bucharest doesn’t lead to any warming up – Ines is too busy courting and sucking up to her client CEO, helping his wife shop, and being preoccupied with an important meeting. Her father is a nuisance in her busy schedule. Seeing her exasperated, running in circles between a capricious client and demanding boss, he is left to wonder whether she is happy at all in her career. After an awkward goodbye, he leaves… only to reappear (to her horror) as Toni Erdmann, a long-haired, crooked-teeth character that forces himself into her office life with carelessness that can ruin her career.

The movie is a character study rather than a social commentary, and yet it’s hard to ignore some of the issues it raises. Ines’ “successful career” looks like an awful deal. Not only it demands most of her energy and time, it demands her personal life to be used and exploited on the altar of her work. When Ines organizes a birthday party, it’s not to enjoy seeing her friends, but to improve teamwork with colleagues. The amount of stress her work generates is enormous, and so to relax she resorts to a combination of meaningless sex and the occasional cocaine. But even in these moments she can’t let herself go, remaining a witness rather than truly participating.

The power inequality between the German managers and their Romanian subordinates also gets a treatment in the movie. Ines’ assistant, a young, modest and always-pleasing Romanian woman is constantly worried about her performance, anxious to learn how to be a “true professional”, and getting criticized by Ines for not speaking enough German. When Ines demands something outrageous from her birthday guests (won’t spoil you the details), she is the first one to accommodate her. After all, she wants to be a professional. The only German who actually makes a human connection with a local, beyond a dominating professional relationship, is Winfried. First when using the toilet in a poor farmer’s house (and even getting a bag of apples out of this encounter), and later when invited to an Easter dinner by a local womаn who takes pity of this sad-looking, self-proclaimed “German ambassador”.

Yes, Winfried forces himself into his daughter’s life with a disregard for her boundaries. But when he becomes a witness to the darker side of it, he refrains from any judgement, offering only his silent support and admittedly-questionable recipes for cheering her up (such as dressing up as a Bulgarian spirit chaser). Definitely not how normal relationships between adult parents and children should work, but then again, normal is too often an euphemism for cold and distant.

So what is so captivating about the movie? First and foremost, it’s the feeling that anything can happen, that you are watching something unscripted, and unpredictable, rather than actors playing their roles. And unpredictability, fused with characters who genuinely come to life is a powerful combination.