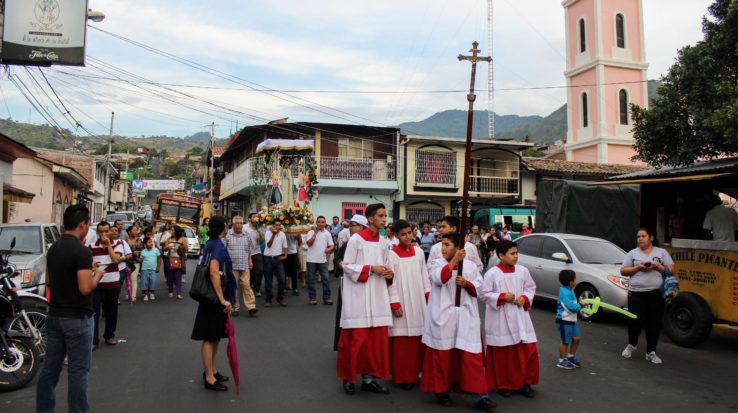 After a month in Granada, you start thinking that all of Nicaragua is hot, humid and happily slow-moving. All you need to change your mind is a weekend in Matagalpa. A two and a half hours drive from Granada north, and you are in a different country – one where spring subdued the summer, surrounding highlands are abound with cloud forests and coffee fincas planted by German immigrants in the 19th century still produce coffee. But before venturing into the mountains, we spent a day walking the city and making some unexpected discoveries.

After a few hours in the city, you notice it’s much livelier than Granada. Instead of tourists lazily sipping cocktails, the center of Matagalpa is all about commerce.

The birthplace of Carlos Fonseca Amador, the founder of the Sandinista Front, Matagalpa has its share of revolutionary vigor.

The most interesting thing about the San Pedro cathedral, built in 1879 is the cute sheep on its facade.

In the nearby Parque Morazán, the statues of Carlos Fonseca (on the right) and Tomás Borge, his long-time friend and the cofounder of the Sandinista Front, point the way to the future.

But the youngsters sitting on the stairs behind them, seemed to be much more interested in the current moment.

A large, toy-like statue of the national poet Rubén Darío is the most interesting sight in the namesake park.

While Ayan stayed with Oxanna exploring the park’s playground, I went to see the nearby museum of Carlos Fonseca.

This small and simple house made of mud and wood, is his birthplace and childhood home. It was Saturday, and the museum was closed, so I got to see it only from the outside. Born here in 1936 to a poor peasant woman, Fonseca grew up to become a teacher, a librarian and a revolutionary.

Inspired by the Cuban revolution, Fonseca founded the Sandinista Front. During his career as a revolutionary he traveled to USSR and was arrested 6 times in Nicaragua. He was killed in the mountains of Nicaragua in 1976, three years before the Sandinista Front overthrew the Somoza regime, which ruled as a family dictatorship from 1936 to 1979.

In front of the park, Parroquia San José exalts a pleasant rose.

At the entrance to the church, a band was waiting for something.

Inside, the nave was decorated with flowers. Men and women, dressed in white, sat in festive solemnity.

Soon everyone started to pour outside. The crowd quickly formed into a procession with alter boys at the front carrying a large cross.

The celebration turned out to be a 100-year anniversary of Our Lady of Fátima, a famed apparition of Virgin Mary reported in 1917 by three shepherd children near the town of Fátima, in Portugal.

Behind the altar boys, several men were carrying a palanquin with a figurine of Our Lady of Fátima. Women were waving white handkerchiefs.

Closing the procession, the marching band set the rhythm.

After following the procession for a few blocks, we stopped for a dinner in a Mexican restaurant. On our way back to the hostel, we happened to walk on a religious gathering of a different kind.

Auditorium decorated with Israeli flags. Girls waving colorful ribbons. A born-again older woman, standing on the scene next to the pastor, talking passionately about Jesus and her faith. That evening Evangelicals were having celebration of their own, that had nothing to do with Virgin Mary.

Evangelical congregation in Nicaragua has grown in recent years, reaching more than 25% of the population. Known for ecstatic forms of worship, energetic evangelization, and helping recent arrivals from the countryside adjust to city life, they draw many migrants into their congregations.

As an Israeli, I certainly didn’t expect to find Israeli flags flying in the highlands of Nicaragua. But one has to remember that evangelical support for Israel stems from their apocalyptic belief that the Jews must return to the Holy Land as a precondition for the second coming of Christ. One tiny problem Jews have with that particular belief is that the second messiah, according to evangelicals, will come only after a global assault on Israel, which will force all Jews to either convert or die.

Night descended on Matagalpa, when we finally headed back to our hostel. A city where catholic processions, revolutionary propaganda and Zionist insignia easily coexist, is a city worth visiting.