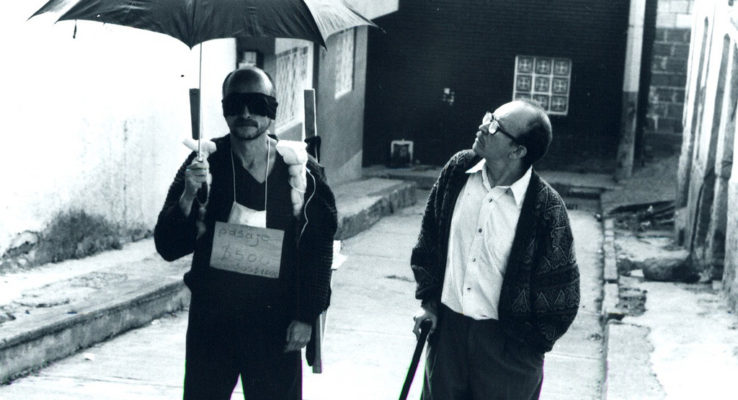 Two men meet in downtown Bogotá. One is Mañe, an older man missing a leg and the means to survive in a city that couldn’t care less. The other is a “silletero”, a man with a chair on his back, who carries people around for money. Their strange friendship slowly takes them to the exact place from which both tried to escape: their past. This Colombian movie originally titled “La Sombra del Caminante” is in black and white, and with its barebones production it looks at first like a student movie. But the absurdity, the dark humor and the mystery that drives the characters quickly win your attention. The end result is a movie that doesn’t let you go.

If you want to understand a society, watch its best directors. No amount of traveling or living will expose you to the tensions and conflicts of a nation the way a single movie can. Talented cinematographers will always be the most accurate mouthpieces of their time and place. The vulgarity of life choreographed into perfection, an assembly of fears and hopes crystallized into a precise study of people. If you want to understand today’s Russia, watch Zvyagintsev. If you want to gaze into the soul of modern Romania, watch Cristian Mungiu. If there is a filmmaker that channels Colombia, it may well be Ciro Guerra.

The people inhabiting “Wandering Shadows” have no use for empathy and even less so solidarity. The landlord of the room which Mañe rents, a retired and often drunk army sergeant, yells at him for being late on his payments. “You are a cripple, go live in an asylum” he tells him. It’s worth noting that the sergeant himself has a limp and he is walking with a cane.

A functioning government is also nowhere to be found. When Mañe comes to the labour exchange office to look for a job, he is told to pay 10,000 peso and not to worry. In return he gets a mock medical exam and a motivational speech in which the hopeful applicants are told to believe in themselves, and the job will come, as if unemployment is a mental, personal problem of the applicants rather than a structural failure that the government has to address. The government not only doesn’t help, it interferes. When the man with the chair encounters policemen, they tell him he isn’t allowed to work without a special permit.

As the title suggests, shadow is the central metaphor of the film. The past is hard to leave behind, its load lies heavily on the shoulders of the two men, its shadow always present. For Mañe it’s the memory of his parents, massacred in his hometown, from which he had to run. “At first they said that the guerillas killed them, than paramilitaries, then narcos, then they said it was a rogue army. In the end, the only thing you know is that they are dead.”

But shadows also protect us from terrible truths. The man with the chair always wears protective goggles that completely hide his eyes. He also carries an umbrella when the sun is high in the sky. The clarity that light brings may ease the burden and bring some relief, but more likely will kill us.

The movie doesn’t have that much dialogue, but it ends up saying a lot about the Colombia that Ciro Guerra sees around him. Like The Rose Seller, the movie deals with Colombia’s violent legacy, but instead of gruesome realism, it does so by presenting a poetic parable. A few words also have to be said about the soundtrack which is haunting in its beauty. In the end art will not save us, but one has to hope it will bring some relief to this fractured land of black and white beauty and horror.