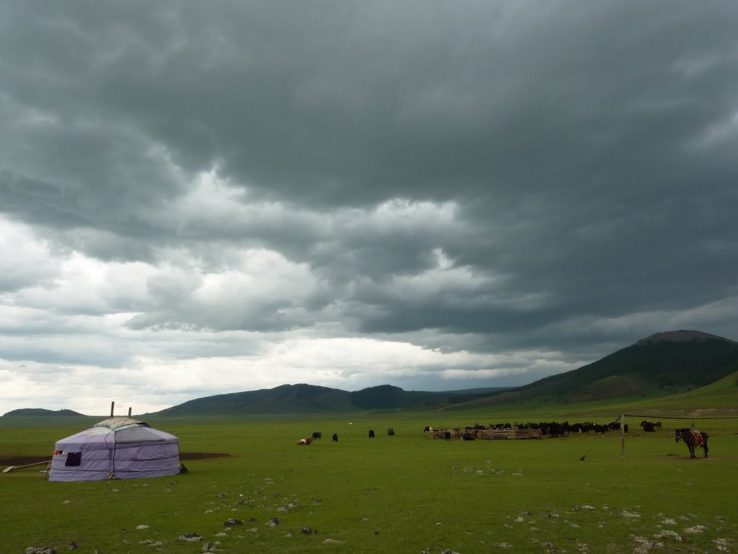 After a wonderfully warm and comfortable night in the ger, the morning brought with it a delicious breakfast of pancakes and tea. While others were packing, me and Oxanna went to say goodbye to the family. A Mongolian custom suggests that guests bring presents to their hosts, and so a small package of tea I brought from home served as our parting gift.

Loading a truck with our gear, and saddling our horses, we started our slow retreat from the Tsagaan Nuur reserve and towards our next hosting family. After a two-hour ride, we approached a bridge. Unloading our gear, we were told to wait on the other side.

Soon, a rugged, middle-aged man in a traditional Mongolian dress (called “del”) approached us and signaled to follow him. With our heavy bags on our backs we were escorted to a small house in the nearby village. A table laid with our lunch was already waiting for us.

As we later learned, this house was family’s winter place. Being half-nomads, they moved for the summer to the grasslands to graze their cattle and came back to their village for the winter. Finishing off the meal with the obligatory salted milk-tea, we were ready to move to the family’s summer place.

Loading our gear on one wooden cart, and sitting on another, we were taken by a pair of ominous-looking oxes out of the village, on our way to family’s ger. One of the oxes had an awful mad look, which possibly explained why his horns were broken.

With a young boy on a horse and our rugged-faced host on foot taking turns in leading the first ox, it was fascinating to see how these large beasts were effortlessly controlled. Pulling a leash connected to a nose ring (that pierces the soft part of the nose) was enough to encourage the bull to go where the handler was leading it. When the boy on the horse was leading the bulls, our host was sitting on the first cart and rhythmically beating the leading ox into cooperation.

Leaving the village behind, we were embraced by the great vastness of the surrounding grasslands. Lonely gers, small hordes of cattle and a myriad of low hills and valleys – this was our first taste of the Mongolian nomadic landscape. I loved it.

In Mongolia there is no concept of land-ownership outside of cities, so every family is free to roam the steppes and move freely from one place to another, in search of better grazing spots.

After a long ride we arrived at the family’s house an were immediately invited inside. The woman of the house served us milk tea and tsagaan idee – dairy products (literally “white food”). This included aaruul (white cheese curds) and a yellow substance, somewhere between sour cream and butter, served with bread.

After putting up our tents and begging our hosts for hujur (blankets) to put underneath the sleeping bags in our tents, we went to freshen up in the nearby river before the dinner.

The gathering clouds didn’t caught us unprepared this time. Out of the river and in our jackets, hats and raincoats, we were back at our camp, with enough time to make some photos of this incredible place.

The dinner was served in the family ger. We were getting used to large servings of noodles with meet. Trying to strike up a conversation with the family turned out to be a challenge – they didn’t know a word of either English or Russian, and our Mongolian was just enough to say hello and goodbye. What saved the evening was our hosts’ idea to let us churn cow milk in a large container.

During this process fat that is contained in milk accumulates on the top, is then collected, and turned into a buttery mass. The milky water is left to ferment, and when it’s ready, is distilled and turned into arkhi – light (15%) vodka (or rather wine) with a distinctive milk taste. Churning up the milk, we not only earned some good laughs but also were rewarded by glasses of arkhi. It turned to be quite tasty, with it’s milky flavor offsetting greatly its alcoholic body.

With a thermos of hot water back in my tent, this memorable day was coming to an end. Going over the day’s event’s, I have remembered our hosts’ rugged faces. With their oldest son being 18, the parents must have been in their forties (Mongolians merry in yearly twenties). But our host and his wife looked well over 60.

Apparently this hard climate of freezing winters and sun-burned summers leaves its mark on people’s faces.