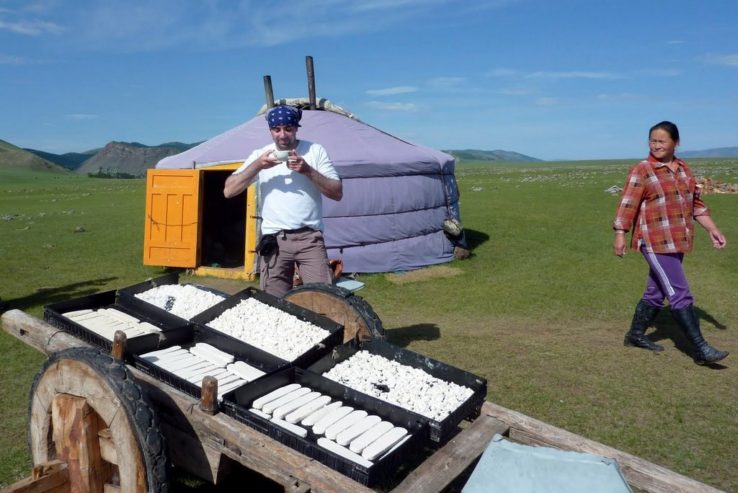 After breakfast, while waiting for a minivan to come and take us back to Tsetserleg, we went to sunbath at the river.

When we returned, we saw a still warm body of a yak that has just been slaughtered. While watching a young man dismembering yak’s body, I realized that this is the same one that was taken out from the horde last night, and tied up to a tourniquet, where family members were usually leaving their horses.

The yak was restless the whole evening, and the girls told me that they heard howling cries through the night. Apparently this tourniquet was the standard last stop for the to-be-slaughtered cattle, and the yak somehow anticipated his upcoming doom.

Cattle slaughtering is a business for the whole family. While the man slays the animal and dismembers it, carefully removing skin and collecting blood, the woman and the children wash the organs in water and empty the guts. Everything is used – blood and guts to prepare blood sausages, stomach boiled, the liver frozen and eaten raw.

Before leaving we brought the family some small presents, and they were happy to photograph with us. The woman brought us a large sack of white cheese snacks which served us well during the long road back to UB.

The same Russian minivan that brought us to the white lake picked us up at noon, we said Bayartay to the family and drove away.

The trip back to Tsetserleg was a neurotic experience. We were used already to the bumpy road and the jumpy ride, but when it started raining, the road became a mash of dirt, complicating the driving and the navigation. At that moment I realized why those Russian minivans have an access to the gears mechanism right from inside the car. In a weather like this, being able to stop the car and tinker with it, not leaving the cabin is a significant advantage. At one point our driver was stopping every couple of kilometers to check up on the car.

Soon the rain intensified and the car started leaking. While we were trying to seal the cracks (while routinely jumping and bumping our heads on the roof of the car), the backs of the last row of seats fell off. While trying to bring them back into upright position, I moved slightly the bags behind them, and the back doors of the car opened. Our baggage was dangerously close to be falling out from the car. I shouted frantically “jarlooch, zogs!” (driver, stop!), but at that point, that was just too much to bear. We were laughing hysterically.

When the rain became a hail, the driver pulled off next to a village house, and left the car without saying a word. After waiting for a couple of minutes, I went out to find out where did he go, only to find out that he was eating lunch in what seemed to be a local diner. Unable and unwilling to get angry, I called my friends and we sat together with the locals and sipped salted tea. Sitting on beds that were put together next to the table, we were laughing at the versatility of the diner – it seemed that it could turn into a motel in a matter of minutes.

After eight hours of driving, we were finally in Tsetserleg. Tired, but mostly hungry we went for a dinner to a nearby restaurant. Despite the abandoned look and the 80’s space decor, we enjoyed our warm meal. Hot shower and comfy beds were a welcomed reminder of the benefits of civilization.