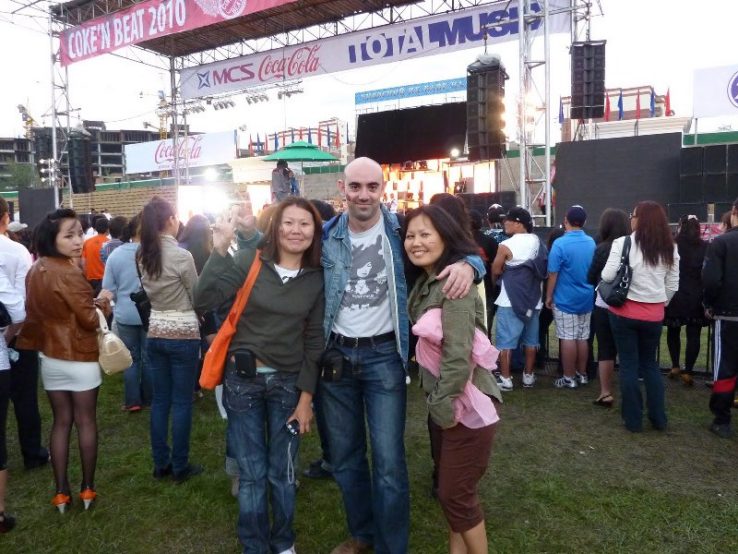 Day 2
We started the day by visiting the Gandan Khiid – the largest Buddhist monastery in Mongolia, and the first one I ever visited. The monks were friendly, when not praying or talking on a mobile phone, they were gladly giving directions or posing for a photo. In one of the temples, while the older monks were praying, a couple of young boys were cleaning the floors. They did this with such mindfulness and concentration, that it looked as a part of a religious ritual.

Coming back to the city center, feeling serene and peaceful, we were confronted by an angry drunkard, which we had to flee to a department store. A serving of Buuz got us back in a good mood, and we went on the lookout for a local sim-card.

Even though almost everything in Ulaanbaator is no further than 1 km away from the city center, finding anything is never easy. Frequent changes in local business landscape makes some Lonely Planet recommendations useless, working hours are inconsistent, asking for directions is risky – English or Russian-speaking Mongolians are rare, as those that would admit they don’t know the location, directing you instead quite randomly. After some lengthy feet-work, we purchased a sim-card, some groceries and returned to our hostel to rest.

The evening turned to be a redeeming experience. First we attended the local theater, which featured traditional Mongolian music and dance.

Waiting for the rain to stop, after the performance, we made our way to the city stadium, where Naadam festival closing ceremony was to be held. The rain has cleaned the air and scattered the crowds, and suddenly the city seemed charming for the first time.

Stadium show featured local bands performing Mongolian rock. With our faces stamped with the Mongolian flags, we smiled, looking at the Mongolian youth doing the same thing teenagers all over the world do – look for identity, and express the need for belonging.

Back at the hostel after another unsuccessful attempt to find an open pub after midnight, we had a modest dinner. Mixing traditional with modern, the city has definitely had some surprises up it’s sleeves.

Next:
Swimming through Ulaanbaator streets