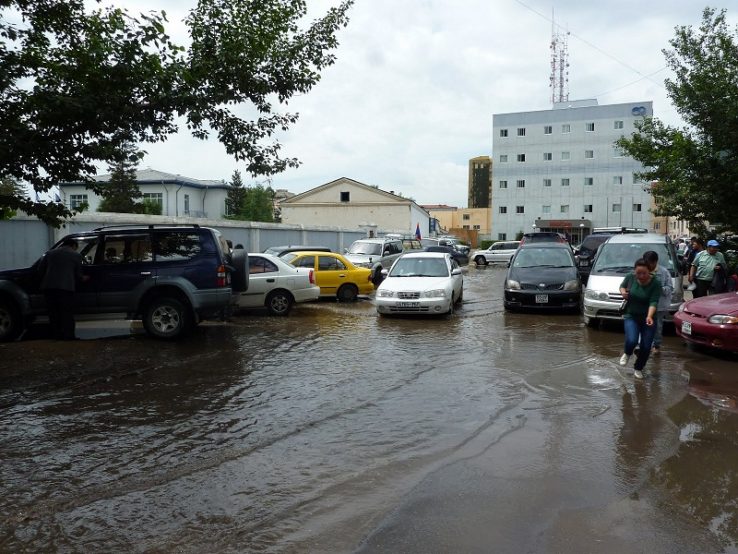 After the night’s rain, UB’s streets became a mess. No wonders Mongolians with means buy SUV’s, the most popular being Toyota’s Land Cruiser.

The Internet café was suffocating, but at least they charged only 700 Tugrigs (~ 50 cents). After lunch we went for an orientation session in Ger-to-Ger travel company. They started as a social project to help the nomadic families profit from a sustainable tourism, and developed into a leading travel outfit. Instead of charging for a driver, a guide, and a gasoline, they offer tourists a chance to stay with the nomadic families, who cook and transport the tourists, and enjoy an additional source of income, without significantly altering their nomadic lifestyle.

On the orientation session, they not only provided us with all the needed information, but also tipped us on how to greet the families (“Mal sureg targan tavtai u” – “Are your sheep fattening up nicely?”), gave us a short lesson on the Mongolian language and showed us how to play the children’s game of ankle bones.

At evening the heavy rain continued, but despite our best judgement, we went out to meet Oxanna’s Mongolian friend, who never showed up.

Navigating through the rivers of water on the streets, I had the nerve to say that we actually have a chance of coming home dry, despite all. As I said that, a car passing near by showered me from head to toe, teaching a valuable lesson in humility. We ended up in a nice pub called Texas, where we drank Mongolian beer, and Oxanna dried her feet.

Next:
Last stop before civilization ends