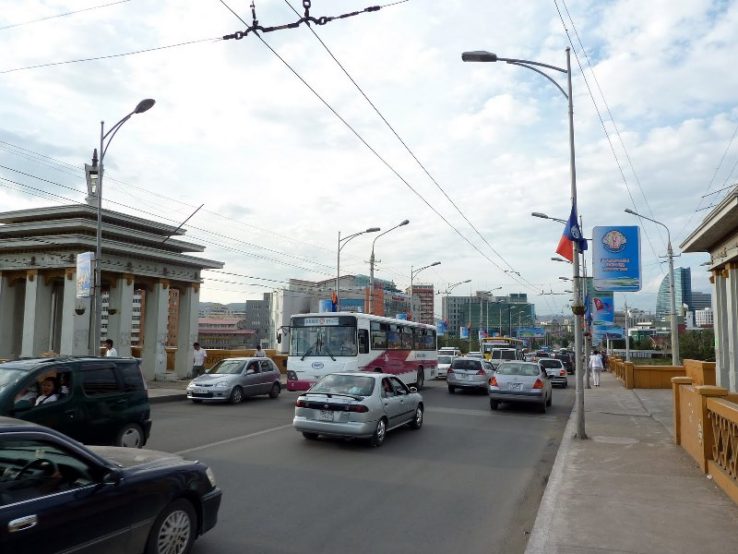 Most airports would look unimpressive after Seoul’s Incheon airport, and the small and lacking in comfort Genghis Khan airport of Mongolia’s capital  is not an exception. In a taxi on my way to the city I had an euphoric feeling that I gonna love this country. Even though the road from the airport to the city was appallingly bad and the driver reckless, the sunrise revealed shaky, lonely buildings on one side of the road, and wild, green hillside stretching to the horizon on the other. This place was uniquely different.

The Euphoria ended quickly when we finally arrived at the guest house. First, the driver demanded to pay more than what we agreed upon. Than there was the guest house. The hostess Enkhi met outside and guided to the grim Soviet-era building. The guest house turned to be a shabby little apartment with 2 rooms, each equipped with dozen of beds. Taking off my shoes, I was met with annoying requests: I wasn’t to take a shower (it’s forbidden to use till 11:00) and I wasn’t to unpack my things (it will make noise and awake my neighbors). Tired, sweaty but not sleepy at all, I unenthusiastically climbed the bed .

My friends came to meet me at the guest-house at noon. We had a lunch in Casablanca restaurant, visited the National Museum of History and went to mix with the locals in the Naadam festival.

The evening was disappointing – the pub recommended by Lonely Planet was closed, all other places didn’t let people in, due to some new regulation about serving alcohol after midnight. After a lengthy walk around UB’s center, we finally found a place that was “open”. After sitting at a table, the waitress asked us to move to another one (“the map there is cleaner”).

A friendly conversation and a cup of uninspiring ice cream were enough to relax after a long day. Overall, the first impression of Ulaanbaator was of a noisy, dirty and generally unpleasant town.