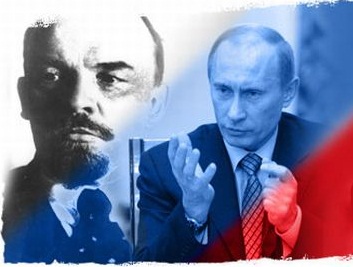 In a recent program on a Russian TV station, high-school teenagers were asked whether they think that a totalitarian regime is good or bad.  Two boys spoke their mind. They said that “it is mostly good, because it brings order and structure into society, and enables progress. If people are not ruled, are not forced to work, nothing gets done”. Subtle nods and facial expressions of the other kids in the class revealed a general support for the view expressed by these two boys.

The sad irony of this story lies in the fact that this  high-school is located in the far north-east of Russia, near the Kalima region, where work camps for regime prisoners were maintained during Soviet times. Entire towns and industries in these regions were built by prisoners, during their encampment in inhumane conditions. The same towns, whose modern-day inhabitants (many of them, descendants of these prisoners) think that totalitarian regime is effective and beneficial.

So how come that a nation, that suffered so much oppression from its rulers, seems haven’t learned anything from its past? Like a person locked in a destructive psychological pattern, making the same bad choices over and over, Russia can’t overcome its fascination with authoritarian rule. In this context, Russia’s recent history deserves a closer look.

The fall of communism was succeeded by the turbulent 90’s, in which Yeltsin’s market reforms left many impoverished, while making others extremely rich. But while the economy was struggling, due to low oil prices among other things, political liberties were blooming. The media was independent and free to criticize the government, the elections were open-ended, Russia’s relationship with the West was becoming warm and friendly. But that wasn’t to last. Yeltsin’s successor (chosen by him for narrow, personal reasons in 2000), an ex-KGB officer Putin, put a halt on Yeltsin’s reforms. His vision for Russia didn’t seem to lie in its future partnership with the West, but rather in its imperialistic Soviet past. Since he came to power, Russia has been steadily retaining the character and spirit of the old Soviet empire, a feared but respected nation, a power to be reckoned with.

Putin, a fresh and an energetic figure, especially compared to the aging and often comical Yeltsin, quickly gained popularity among the Russian people. A nation, aching to be proud of its country, but failing to find a hope in the political and economical reforms of the 90’s, found in Putin the same old Russian Tzar, from Ivan the Terrible to Stalin, that it always has so loved to fear. Perceived as a strong, almost ruthless leader, but in the same time intelligent and photogenic, Putin is a refined, modern version of the communist leaders of the past. Tapping into the anti-western and anti-oligarch sentiments of many Russians, he replaced Yeltsin’s corrupt, fragile but free democracy with a Chinese-style authoritarian rule, where the elections, local governments, national resources and the media are controlled by the Kremlin. Putting many of his old KGB friends in key government positions, he transformed the chaotic and locally-corrupt public sector into a faceless, cynical machine of government-sponsored, government-ordered corruption.

What is surprising is that the majority of Russians are not worried by this turn of events. The sentiments expressed by the two young boys are not unusual or untypical. You hear many Russians say that the nation needs ‘a strong hand’, because it’s too large to be governed otherwise. Others claim that Russians are incapable of having a functioning democracy – that they predestined, by their national and cultural attributes to choose an authoritarian regime. The first want a harsh rule, the second are fatalistic. But can these arguments satisfy us? Can we wholeheartedly accept that Russia’s bear hug with totalitarianism is a kind of fundamental flaw that can never be fixed, and it’s destiny is forever to oppress its own people?

In this regard, Germany serves as a good example. Run for many years by strong, authoritarian leaders such as Bismarck , and eventually overrun by a fanatical tyrant, its natural preference for an authoritarian-style leadership seemed to be similar to that of Russia. But after the nation was reduced to ashes in WWII, it started a long period of restoration. While East Germany was behind the Iron Curtain, West Germany enjoyed an unprecedented period of growth, in which democracy took a firm hold. But its dark history was not forgotten, its painful past was not brushed under the rug. On the contrary, it is remembered, taught and reevaluated constantly, in its schools, culture and politics. And there are no signs that the German people are uncomfortable with their liberal democracy.

So what the German example demonstrates is that cultural habits and national self-perceptions can change.  Of course, Germany’s transformation was due to an extreme external interference, but never the less, it serves to show that nations have the ability to change and grow, just as individuals do. The Irish are “lazy”? Look at their Hi-Tech industry. The Jews are “victims”? Not anymore. The Russians “need a strong hand to govern them”? Really?

While a crude copy of Anglo-Saxon democracy may not be suitable for every nation, an authoritarian, self-serving cynical rule is suitable for no nation. While American attempts to install democracy in Iraq and Afghanistan may fail, it won’t happen because their people prefer the rule of maniacal despot like Saddam or of fanatical extremists like the Taliban. Despite our cultural differences, we all want peace, prosperity and liberty for us and our children.

So what will it take for Russians to lose their long-standing fascination with the idea of the Tzar? What will it take for them to break this vicious cycle of oppression and servitude , and become a society of free and responsible individuals, that are respected and served by their government, and not vice-versa? I hope that we will know soon enough.