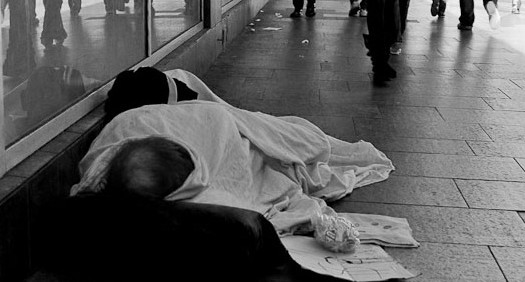 A couple of  years ago I went to visit my mother in a hospital. Just as I parked my car, a young guy approached to me with a bouquet of wild flowers. He told me that he lives alone with his grandmother, and that he doesn’t have any money to buy food. He offered me to buy one flower for twenty shekels. He didn’t look particularly miserable or hungry, and there was something defying in his attitude, as if he dared me to believe him. I thought to myself that bringing a flower to my mother would be a nice gesture, so I  got out my wallet, and paid for the most expansive flower I have ever bought.

During my stay in the hospital, my mind was preoccupied by this episode. I felt that my response was inadequate, and that I missed an opportunity to give this guy more than my money. On my way back from the hospital the guy was still standing in the same place. I approached to him and told him that “I had no way of knowing whether his story is true or not. But for whatever reason he needs the money, instead of  selling his melodramatic story, maybe he would be better off simply selling flowers to hospital visitors”. The guy smiled at me, but said nothing.

My thoughts kept coming back to this episode for several days. I wasn’t too impressed by my own behavior, but even more so, I was intrigued by the dilemma that I faced, when confronted with the request for help. I didn’t want to fall prey to a professional beggar, a small-time scammer, looking to make some quick money, but I also didn’t want to turn my shoulder to someone in a real need. I didn’t want to be fooled, but didn’t want to be insensitive either. What was I to do?

When someone requests our money, he becomes a salesman, even if all he sells is his wretchedness. Using a mix of persuasion, pressure and pity, the beggar forces us to make a choice – either to buy our way out of this uncomfortable situation, and possibly feel cheated afterwards, or to ignore the plead, and be seen heartless in our own eyes. The ‘assertive beggar’ puts us in a lose-lose situation.

Is the beggar to blame for being pushy?  Surely not, people do whatever they have to, to get by. And how can we judge them? What do we know about their life, and the chain of events that brought them to be doing this? But in the same time, that doesn’t mean that we should be receptive to their manipulation. Because if we are, we are robbed of much more than our money – we are robbed of our good will.

Charity is meaningful to the giver only when it is given out freely, out of good will, true compassion or on some benevolent impulse. It’s rewarding only when it is an act of free will, an empathetic reply to a silent cry of help. It should be ignited by compassion of the giver, and replied with a gratitude of the receiver.

But when the charity is extorted, emotionally blackmailed or otherwise demanded, it loses its deeper meaning. The receiver becomes a seller, the giver becomes a buyer, and the act of charity becomes a transaction. Any time we are cornered into giving a charity, we become increasingly more cynical and suspicious. We avoid eye contact with the homeless, we steer clear from the blind, we shut our car windows, we lock our doors. We don’t want to see misery, because we don’t believe it anymore.

These days, whenever I am approached and asked for money, I subtly refuse. Instead, I try to notice those that sit or lie on the side of the road. A beggar that keeps a dignified posture and acknowledges his gratitude with a silent nod, a musician too absorbed in his playing to notice the street noise, a homeless smothered by life, with a vacant, mindless  look in his eyes.