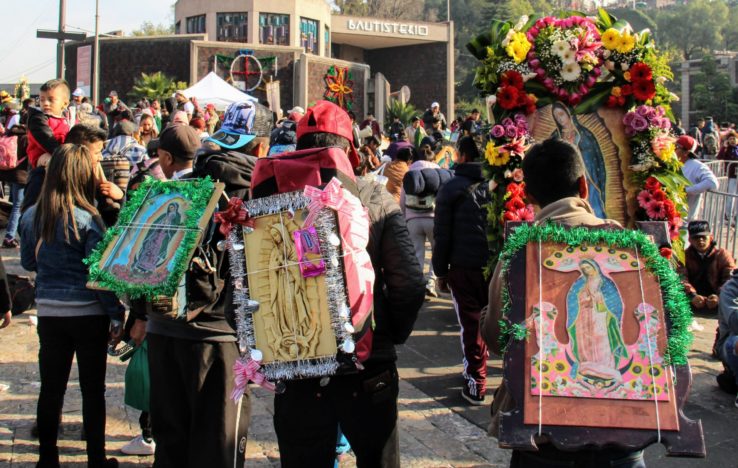 “Are you crazy? People are warned to stay at home, don’t go!” When I messaged Oxanna that morning that I’m on my way to Basilica of Our Lady of Guadalupe, she panicked. Millions of pilgrims were expected to visit the basilica on December 12th, the Day of the Virgin of Guadalupe, to see the venerated image of La Morenita (The Brown Lady, as Virgin Mary is called here), and ask for her blessing. Reassuring Oxanna as best as I could, I left the taxi in Tepeyac, in northern Mexico City, and made my way towards the basilica. According to tradition Virgin Mary appeared here before a native Mexican peasant Juan Diego. A story that changed Mexico forever.

Expecting endless crowds on foot, I am met instead with parked bikes and moto-taxis, with the image of the virgin installed on roofs or fastened on the back.

A man selling canvases with the image of the virgin to those who have come unprepared.

Pilgrims, many of whom have come on foot from far away, carry blankets covered by the venerated image.

Some have passed the night on the street in front of the basilica.

Others choose to carry the image of the virgin on large wooden frames fastened to their backs.

Nearby alleys are filled with vendors selling statues, blankets, candles.

A Virgin of the Guadalupe picture that is so large it hides the man carrying it, attracts my attention. When the picture starts moving, I follow it.

Crossing the street we head towards the New Basilica. When the Old Basilica became dangerous due to the sinking of its foundations, a modern structure was built next to it in 1976. The building looks a bit like a tent and has seven entryways that represent the seven gates of Celestial Jerusalem referred to in the Bible.

As we enter the basilica, a slow stream of pilgrims converges into a sea of people moving slowly to a destination which I’m yet to find out. The circular structure is 100 meters in diameter and can accommodate up to 10,000 people.

But this isn’t a usual mass. Instead of moving towards the center of the hall, the stream carries me through a passageway towards the other side.

Coming closer, all eyes and cameras turn up towards the central wall. The logic of the crowd becomes apparent. Framed by a large flag, under a bullet-proof glass, it’s the “original” image of the Virgin of Guadalupe, that everyone has come to see.

According to the Catholic tradition, when the Virgin Mary appeared to Juan Diego on December 9th 1531, she asked that a shrine in her name be built on the spot. Juan Diego told the bishop about the apparition, but the bishop didn’t believe him and demanded a sign. The Virgin soon reappeared and ordered him to gather flowers from the top of Tepeyac Hill, which was normally barren, especially in the cold of December. Juan followed her instructions and he found Castilian roses, not native to Mexico, blooming there.

Juan took the roses to the bishop and when he opened his cloak, dozens of roses fell to the floor and revealed the image of the Virgin of Guadalupe imprinted on the inside of his tilma (a type of cloak wore by Aztec men). This imprint is what attracts 9 millions of pilgrims during the fest alone.

Those less inclined to believe in miracles, may find politics of conversion to be a more likely reason for the appearance of the story. Following the Conquest in 1519–1521, the Spanish destroyed a temple of the mother goddess Tonantzin at Tepeyac, and built a chapel dedicated to the Virgin on the same site. Tonantzin (the beloved mother of the gods) was celebrated around each winter solstice. The winter solstice of 1531 occurred on December 12, the same date the virgin has appeared to Diego.

If you have never seen moving stairs installed in a church, there is another reason you should visit the basilica. Pretty useful if you want to allow people to gaze and pray without blocking the way.

A tall guy carrying a large wooden frame decorated with flowers stands out from the crowd.

As we leave the Basilica from the opposite side, I approach him. His name is Otario. He walked 36 kilometers, all the way from Tezcoco carrying the image on his back. “How much time did it take you”, I ask. He is smiling. “We left Tezcoco at 9pm and walked non-stop until we got here at 5am in the morning”. He invites me to take a photo of him and his friends. I’m glad to accommodate.

Many pilgrims arrive at midnight to light candles and sing “Las Mañanitas” (a traditional Mexican birthday song) in honor of the virgin. They pass the night around the Basilica in tents or simply covered in blankets.

A father and his son gladly pose for a picture.

A statue of Pope John Paul II stands in front of the new basilica. During his leadership, Juan Diego was declared “venerable”, and the pope himself announced his beatification in 1990, during a Mass at the Basilica, declaring him “protector and advocate of the indigenous peoples”.

Known today as the “Templo Expiatorio a Cristo Rey,” the first structure of the old basilica was completed at 1709. The icon of Juan Diego’s cloak was housed in this church from 1709 to 1974.

Since much of Mexico City is built upon the dried lakebed of Lake Texcoco, the land was unstable and the old basilica was sinking. So the new basilica was built.

“Conversion of the Indians”, a large painting with the Virgin of Guadeloupe in the center, is a reminder of the role the icon has played in the conversion of the natives. Her local origin, her brown skin, her speaking in Nahuatl with Diego – all made it easier for the indigenous population to rally around her.

Outside the old basilica, Aztec dance troupes from across the city perform in Plaza Mariana.

A cool morning has given away to a sunny, hot day. So this little dancer has to put some moisturizing cream on her feet.

Crossing the square, I stop to talk to a group of friends who were taking selfies in front of the new basilica. Aldo, Biri and their friend came all the way from Puebla. The 130 kilometers pilgrimage took them 3 days to complete. Walking during the day, they slept in the field at night.

Further away from the basilica, volunteers give massage to weary pilgrims.

Carillon, a modern bell tower and clock construction is a typical example of the eclecticism of public spaces in Mexico.

As I make my way out, crowds keep pouring in.

From 9th to 12th of December, more than 9 million pilgrims have visited the Basilica. It is the most visited Catholic pilgrimage site in the world.

Instead of carrying a large painting of the virgin, one woman walks on her knees to show her devotion.

I leave the basilica and the crowds behind and dive into side streets that suddenly seem very quiet.

Here I find parked vans and trucks that brought pilgrims from all over the country.

As I make my way to the metrobus and back to my secular existence, I wonder if I am missing anything, not having this kind of devotion in my life.