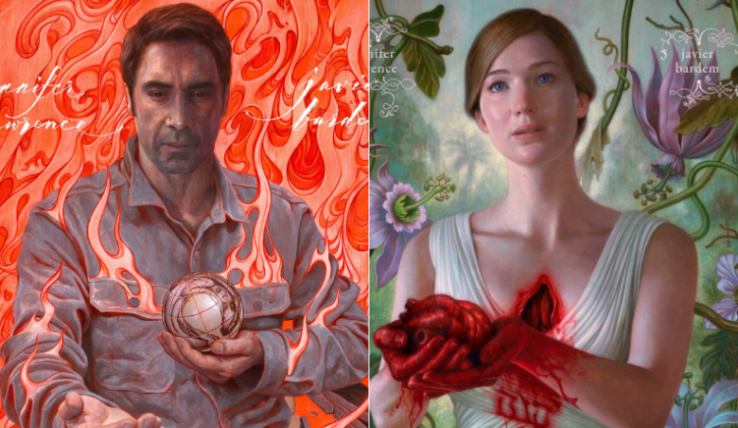 If you haven’t seen Darren Aronofsky new film Mother!, maybe you shouldn’t be reading this. Not because I’m going to spoil the plot but because I’ll be putting ideas in your head about what the movie is about. And that could diminish your enjoyment in trying to figure it out for yourself.

Mother! is an allegorical movie, a film whose literal plot hardly hides its mythical ambitions. But unlike some other enigmatic movies who are too cryptic to even try to untangle them (David Lynch enjoys making those), Mother! is open for almost too many interpretations. Which one is the “right one”? Or maybe we are looking at a stack of pieces put together from multiple puzzles, instead of a single one? Whatever it is, the experience is profoundly captivating.

Let’s get the premise out of the way first. A young woman, played by Jennifer Lawrence lives in an old house with her older husband, (Javier Bardem). While he struggles to write his next novel, she is slowly rebuilding the house, which got burned down before they met. She seems to be emotionally unstable, plagued by seizures and strange visions in the walls and the basement of the house. He is preoccupied, distant, never really noticing her needs.

A late night guest arrives at the house by mistake. The husband who finds his company stimulating, invites him to stay over for the night, despite his wife’s concerns with letting a stranger in. She asks the guest not to smoke in the house, only to find out cigarette butts in his room the following morning. Soon another person appears at the door – an attractive middle-aged woman that turns out to be the guests’ wife. Reunited with her husband, she stays at the house. The young woman tries to be a gracious host, but the guest wife’s trespassing behavior and her inappropriate and intrusive remarks about having children make her feel even more uneasy. And from here, things will only get stranger.

So what is the movie about? The first clue must be in the title. Motherhood. Which starts with judgement. Everyone has an opinion about women’s choices – family planning is everyone’s business. Which continues with pregnancy. The loss of privacy. Now not only their choices, but their bodies are open for public discussion. They are violated by gazes and hands – of doctors, nurses and strangers. In the hospital their voices aren’t heard, their autonomy isn’t respected. Being incapacitated, the husbands make the choices now. The people that come for a visit, the speeches being made – nothing is of their choice.

Women go through hell to give birth. Taking care of the newborn is just as hard, their lives subjugated to children needs. They incubate their children, trying to protect them from the outside world, creating a small cocoon of material and emotional comfort. But sooner or later the children are taken from them to the men’s world. A world driven by ideology and made-up narratives. Where historical, generational considerations trump personal wellbeing, where human life is easily sacrificed on the altar of the greater good. That exclamation mark in Mother! is a cry for help, the wish to return to women’s world of sustenance and care. But it always comes too late, when pain and death are already about to engulf.

The biblical connotations in the film are hard to ignore. Western civilization’s most famous mother is of course Mary. Is it her sacrifice and pain the movie alludes to?

But maybe motherhood should be understood in a wider sense? The burned home, the constant giving, the needs and warnings that are being ignored – maybe they are a metaphor for Earth and humanity’s neglect and abuse of it? Admittedly, this is a lazy interpretation. Mother! is a more complex movie than Avatar, and Hollywood cliches shouldn’t be attached to it hastily. But it’s certainly a possibility.

Or maybe the movie is based on the experiences of Darren Aronofsky himself? About creator’s artistic side, that needs self-nurturing and goes through constant agony to give birth to something meaningful, and his egotistical, destructive side, that craves recognition and admiration and leads to his creative death. Maybe the movie is about the strange relationship between a creator and his audience: the eventual loss of control, the public’s misrepresentation of his work and the false idolizing, that every successful creator has to deal with.

Or maybe it’s neither of these. The movie works both as a tense psychological thriller and as a myth, whose possible readings are as rich and diverse as human culture itself. Enjoy the riddle… and call your mother, will you?