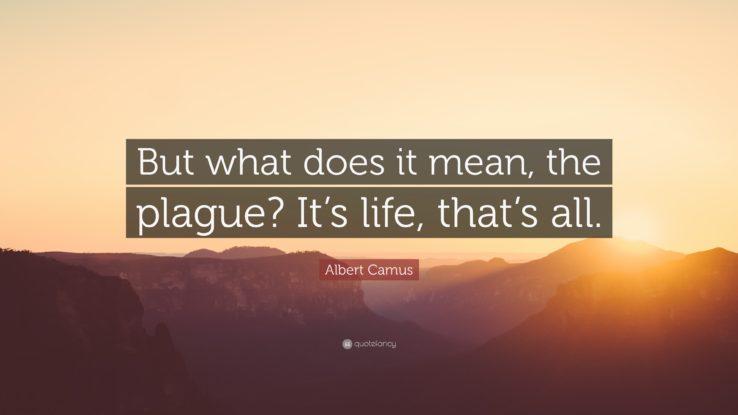 I have been putting off reading this novel by Albert Camus for a couple of years now. Back in Haifa I had 2 hard copies of the novel – one that I purchased myself a while back, and one that I received as a gift from a friend. But I just couldn’t bring myself to read it. An isolated city going through an epidemic of plague. To settle in such a bleak world for weeks was something I never felt quite ready for. I thought I needed to build up resilience to get through it, or wait for some especially sunny period in my life, to offset the burden of reading. And this time has never quite come.

And then Trump won, and suddenly I felt a sense of urgency to read it.

Well, I just finished the book. It’s very good. And strangely enough, it’s neither depressing nor pessimistic. For a novel about a sustained wave of meaningless deaths and suffering, that’s quite an accomplishment.

How does Camus pull off such a stunt? I’ll tell you how. Simply by not giving evil any role to play in the text. There is negligence, madness, absurdity, loneliness. But there is no evil. People die, but there is no one to blame – just a vast, cold, senseless universe, and lonely, sometimes misguided people trying to find a footing in it.

“The evil that is in the world comes out of ignorance, and good intentions may do as much harm as malevolence, if they lack understanding. On the whole, men are more good than bad; that, however, isn’t the real point. But they are more or less ignorant, and it is this that we call vice or virtue; the most incorrigible vice being that of an ignorance that fancies it knows everything and therefore claims for itself the right to kill.“

Amidst confusion and fear, the city’s priest thinks it’s his hour. In his sermons he calls people to repent, to turn to God, to hear his warning. But then he witnesses an agonizing death of a child, and has no choice, but to drop his righteousness and start feeling empathy.

The heroism in Plague isn’t of the heroic type, but rather the stoicism of those that don’t turn away, don’t hide in their own cocoons. Doctor Rieux, novel’s main protagonist does what he can to help the sick. Which isn’t much more than to isolate them and follow a hopeless procedure. For Camus, doing your work and not giving up – that’s the best a man can do.

“By giving too much importance to fine actions one may end by paying an indirect but powerful tribute to evil, because in so doing one implies that such fine actions are only valuable because they are rare, and that malice or indifference are far more common motives in the actions of men. And that’s not so”

And then there is Tarro. An enigmatic figure we know little about up until the end of the novel. He organizes volunteer brigades to help out city’s staff of doctors and nurses that can’t cope with the ever-growing load of the sick, the dying and the dead. In his moral worldview, there is no justice, no evil to be punished. Only victims and unwilling or misguided murderers.

“All I maintain is that on this earth there are pestilences and there are victims, and it’s up to us, so far as possible, not to join forces with the pestilences. That may sound simple to the point of childishness; I can’t judge if it’s simple, but I know it’s true.”

Should we view the plague as a metaphor? Do the lethal disease-carrying microbes stand for something else – say, poisonous xenophobia that easily spreads among those who don’t practice mental hygiene? Living in times of rising populism, I couldn’t avoid the connection. But either way, what matters here is that Camus doesn’t belittle men, doesn’t make them wretched. He shows them as they are: lonely and self-absorbed but also brave, sometimes unreasonably. And there is place for friendship and human warmth in this world, even if fleeting.

Perhaps the easiest way of making the town’s acquaintance is to ascertain how the people in it work, how they love, and how they die.

In these times of rising stakes, Camus voice is as relevant and timely, as it was 70 years ago.