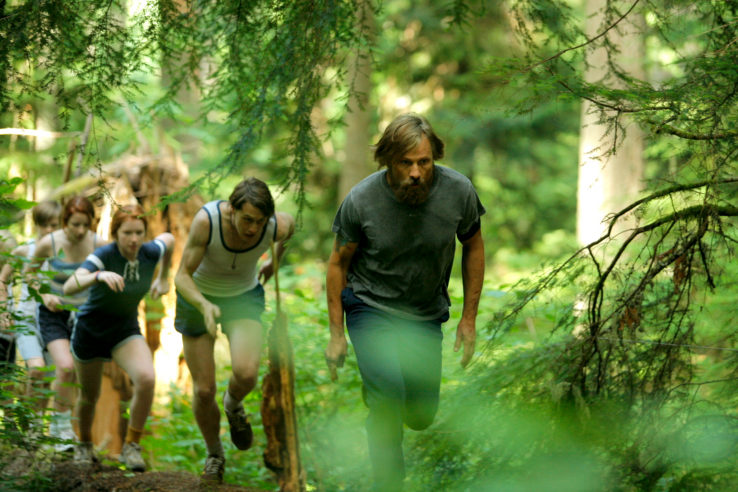 “Captain Fantastic” is about a father and his six children living on their patch of land somewhere in the forests of the Pacific Northwest. Their life seems to be simple, pure and almost Eden-like. Devoid of the soul-numbing effect of consumerism and the distractions of online existence, they hunt, race, climb mountains, read books to fire light, play music and have thoughtful discussions. Ben’s ability to organize his 6 children of different ages into such a well-functioning and cooperative group is nothing less of fantastic.

But not all is perfect in this world – the mother is absent. Leslie is hospitalized, treated yet again for her bipolar disorder. When Ben drives to the closest town and calls Leslie’s sister to ask how is she doing, he receives tragic news. His wife killed herself. This springs the movie into motion. Leslie is going to be buried in her hometown, and Ben and the children decide they must attend the funeral, despite Leslie’s father promise to have Ben arrested if he gets anywhere close (he blames Ben “for everything that has happened to this family”).

Amidst the grief and the sorrow, the orphaned family boards their hippie bus and begins a trip to America the children hardly know.

So where does the movie succeed? Most noticeably, in exposing the predicament of modern parenting. Probably the best scene in the movie is the one at Leslie’s sister’s house, where sister’s “normal” family shares dinner with the “hippies”. When sister’s teenage children ask their parents how their aunt died, the parents concoct some generic platitude about Leslie “being very sick, and sick people sometimes dying“. But Ben doesn’t believe in lying to children to “protect them”. So he tells the truth about Leslie’s long history with bipolar disorder and how she killed herself, slitting her wrists. Leslie’s sister storms out the room appalled by his words, and we are left gasping at the truth revealed by the movie.

Why do we need to protect our children from difficult, even horrible truths? Because we don’t love them enough. Of course we care about them, we invest significant resources in them. But we also construct layers of separation between us. We distance them from ourselves (just think how many time you’ve seen children restrained to a stroller, when they would prefer to be out). We put them in care facilities where they don’t get the attention and the constant connection to an adult, they crave. We push them early to an independence, instead of fulfilling their needs. Our practice of parenting is less dogmatic than that of previous generations, but arguably more mechanistic. We are busier, we have more opportunities in life, we have myriad other plans and projects. The only way to manage all of that is to compartmentalize. So our children are compartmentalized. They have their own bed, their own room, their own busy schedules. The only thing they have less of, is a free flow of abundant and spontaneous love that would nourish the bond.

It’s fairly obvious that children who are securely attached to their parents – who are close and emotionally connected, are in much less need of “protection” from the truths of the outside world. “So what if the world is sometimes a horrible place? So what if people suffer and die? You see, I have this magic force shield around me, called “secure attachment” that let’s me cope with difficult emotions, without developing anxiety. Whatever happens “out there” is perplexing, but not really threatening to me.”

This “protection” that Leslie’s sister and her husband worry so much about is a desperate attempt to compensate for the lack of attachment. Ben on the other hand, is all there with his children. No separation, zero compartmentalization. He is demanding, often even tough on them, but never distant or emotionally unavailable. And that’s why, even while going through the worst period of their life, his children don’t freeze emotionally, don’t become numb, but instead grief wholeheartedly.

But the movies doesn’t sanctify Ben. His utopian project had victims, Leslie being the first one. His visionary idealism inspired her, but also fed her manic outbursts. The children, despite being self-assured and well-educated, lack the social skills and the common sense that comes from living in a society. “Look at us, we are freaks”, says the eldest to his father, after speaking with a girl his age for the first time.

So who would you want your children to resemble more? The routinely bored, fixated on screens “normals” or the inquisitive and self-disciplined “freaks”? The movie reminds you that you still have a say in the matter.