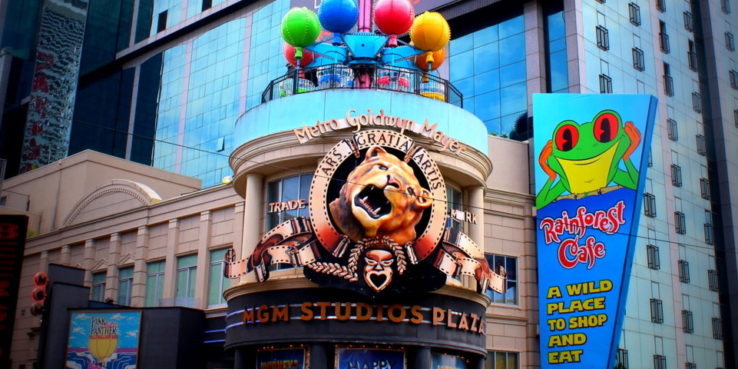 The main street of the city of Niagara Falls, the one on the Canadian side of the famous falls, may seem as a scaled-down version of Las Vegas. A sparkling hub of neon signs, flashing lights, 3D, 4D and even 6D (!) entertainment complexes, diners and franchise restaurants that offer combo meals with supersizing options. Basically, everything that American entertainment industry is good at, condensed into one street. Affordable and accessible, no-nonsense, mass entertainment, packaged and sold to anyone who needs to lose his troubles away for a couple of hours.

The Rainforest Cafe, a chain restaurant themed after a rain-forest, is a perfect example of this. As you step into its dimly lit setting, you are met with dense, jungle vegetation on its ceiling and walls, voices of birds and the occasional roar of mechanical elephants that move their ears and gorillas that drum on their chests. The waiters are dressed as safari guides in khaki shirts and short pants. And the menu is full of dishes with exotic names. A great fun for kids, and those unburdened with refined tastes.

It’s easy to be snobbish about it. Having just recently traveled to Berlin and Switzerland, the town feels like the epitome of what America has historically been known for in Europe: the marriage of large, loud and tasteless. As someone who prefers Ingmar Bergman and Umberto Eco to Michael Bay and Stephen King, my first impulse was to write the whole thing off as a proof of the inferiority of American mass entertainment to European culture. After all, a typical European restaurant boasts a dining experience that is based on centuries-long tradition, natural ingredients and an emphasis on a selection of wines, rather than quickly served fries and soft drinks in plastic cups. And unlike an IMAX movie that relies on quick gratification, an opera is an intricate art form that builds up emotion and drama slowly.

Does that mean that American mass entertainment is essentially “fake”, while European tradition is “true” and “authentic”? That was certainly my first feeling. But the more I thought about it, the less obvious the answer was.

The American consumerist lie is so obvious that no one falls for it. No one is deluded into thinking that Wendy’s is something more than a cheap hamburger, or that IMAX movies have more to them than an eye-catching, loud spectacle. Since the target audience is so broad, the illusion can’t be more than only thinly concealed. When the restaurant’s decor is from plastic, the waiters’ uniform ridiculous, and the dishes have silly, made-up names, the truth seeps through the seams. And what can be more revealing than a slogan like “a wild place to shop and eat”. All of this makes you starkly aware you aren’t a jungle explorer, but a customer that gets a good value for his money. But you may play the game nevertheless, because it’s fun.

But a French restaurant will have you believe you are getting more than just a nice meal – that you are partaking in something that is wholesome and pure. An evening in the opera house will make you believe that you are not just entertained, but also spiritually enriched. All of it deadly serious and “for real”. But isn’t that just a more elaborate lie, one that goes to far greater lengths to conceal the artificiality of it? Isn’t a fine, eight-course meal’s claim to be more than just a good food in a way more fake than a humble hamburger? Could it be that an opera house’s claim to be a keeper of essential renaissance tradition, rather than just a sophisticated entertainment is a bigger lie than cinema owner’s billboards announcing the newest summer blockbusters?

Lights and neon signs were lighting up when we were leaving the city in the evening. And in the back seat of a speeding car, I was finding its embracing invitation slightly more charming.