If someone would ask me how a city of the future would look like, I would suggest Toronto as a likely model. Not because of some futuristic architecture or hi-tech infrastructure – in that regards Hong-Kong and Seoul would surely have the upper hand. But more importantly, due to its incredible cultural and ethnic diversity. As countries and cities increasingly compete for skilled labor, we should expect political borders to give away to sensible immigration policies, and people to become ever more mobile and ready to move around and mix. Well in Toronto, a city in which more than 50% of its population isn’t local, that has already happened. And the result is fascinating.

But let’s start from the beginning. We arrived to Toronto in the last chilly days of April, on the brisk on spring.

In Thornhill, a suburb to the north of the city where we stayed with friends, the immigrant life is felt in its raw force.

Taking a bus and a subway every day from Thornhill to downtown, we were making the same route many repeat every day on their way to work. And no matter how cramped the bus was, or how late people were running (for some reason, subways are often delayed in Toronto), we saw the same courtesy and friendliness everywhere. As we were traveling with a small child, someone would always offer his seat. Public transportation, with its inherent stress and lack of privacy is often a stage for alienation. But in Toronto it doesn’t feel so.

Emerging in China Town, you see a place that could be easily a district of Hong Kong.

Kensington Market, the older neighbourhood which is adjacent to China Town, is probably the most laid-back place in Toronto. The myriad cafes and bars, the sounds of guitar and the smell of weed make it a cheerful place to wander and spend the afternoon.

The following clip I shot that afternoon in Kensington market sums up for me the feeling of Toronto as a place where diverse people seem to live without walls between them.

Nowhere is the amalgam of cultures in Toronto evident as in the surprising food combinations available.

The downtown area is more solemn and serious, but it didn’t feel to be in too much of a rush.

The first days of May saw a Jane’s Walks festival in Toronto and around the world. Jane Jacobs, and urban activist, is known for organizing grassroots efforts to protect existing neighborhoods from “slum clearance” and advocating mindful city development that empowers citizens to make decisions for themselves. In Toronto, where she lived the second part of her life, many walks, guided by volunteers with local knowledge, were taking place around the city.

The second Jane’s Walks we joined was dedicated to Toronto’s graffiti scene. 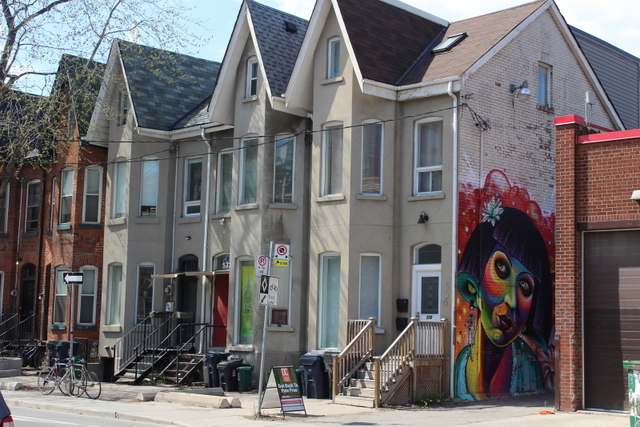 After a week in Toronto, we left it for 10 days. When we were back, the spring blossom was everywhere.

On our way to the airport, in the cab’s backseat we were trying to put in words the feeling that the city has left us with. And it came down to this: a city, far away from home, where you don’t feel like a foreigner.