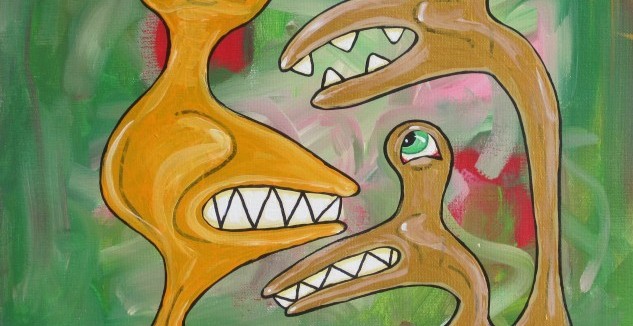 My parents always wanted me to marry a Jewish woman. So when they found out that I’m getting serious with someone who isn’t Jewish, they were quite upset. I tried to understand their point of view, but was struggling to do so. I knew that their objection wasn’t religious – having lived all their life in atheist Soviet Russia, they are distinctly (but typically of their generation) secular people, and immigration to Israel didn’t really change that. So what was it that made it so difficult for them to accept? Aside from the usual caution we keep for strangers who don’t fit into our familiar world, there was something that disturbed them on a much deeper level. The answer lied in their past.

Soviet Russia in 60s, 70s and 80s, full of contradictions and absurdities, must have been a peculiar place to grow and live in. While the ideological dogma was of a multi-national brotherhood of men and women united by class solidarity, in which race and gender differences were downplayed, the reality of the daily lives was quite different.  While my parents’ Jewish heritage has indeed withered (being the first generation to grow without learning Yiddish or celebrating Jewish holidays), their Jewish identity hasn’t dissolved in the communist melting pot. On the contrary, it was molded by an environment, in which anti-semitism, while being officially denied, was commonplace,  practiced by the establishment and by regular people in everyday situations.

While being quite different in how they felt and reacted to such occurrences, I’ve heard enough stories from my father and mother to know that both have acutely felt their Jewish descent. My father, being much more thick-skinned was less susceptible to fear and worry. But still, his life experience, including a string of two unsuccessful marriages has taught him the same lesson, as the one learned by my mother, whose much more sensitive nature has led to her instinctive avoidance of public gathering and mobs, where her Jewish looks would potentially make her a target for hostility and aggression.

The lesson being: you have to be with your own kind, if you want support, understanding and safety. A tribal mentality at its core, formed by a life experience in which solidarity with fellow tribesmen comes from shared experiences of discrimination and hostility.

Unfortunately, we humans are pretty bad at adjusting the tough lessons we learned in the past to new realities. Immigration to Israel of 90’s haven’t done much to change my parents’ views. They still felt that we have to stick together, and marrying a non-Jew would make you vulnerable. Who is the threat in this new reality, where Jews are the dominant majority? Not really clear. But habitual fear doesn’t bind easily to rational reflection.

Actually, same could be said about most Israelis. While Jews are the dominant cultural and ethnic group in Israel, we still often behave as a persecuted minority, carrying on our tribal genetic memory. The mindset of “everyone is out there to destroy us”, and the belief that our survival depends on our tribal instincts is still very much prevalent in Israel. Of course, the constant political and military conflict with neighbouring Arab nations and a world mostly critical of Israel do little to persuade otherwise.

Israel was founded as a safe-haven for Jews, on the ashes of the Holocaust. Shaped by the idea that “this should never happen again”, generations immigrated and grew here. From a small agricultural settlement, it developed into a high-tech nation and a regional economic and military power.

But despite our accumulated confidence and strength as a nation, we are still chased by ghosts of persecution, we are still suspicious of strangers and we are still critical of marriage outside our tribe. Worse yet, our painful past, instead of making us empathetic to the suffering of others, has made us blind (and morally justified in being so), as evidenced, for example, by our indifference to the situation with African refugees. In our minds, we are still a small tribe trying to survive in a hostile environment,  not a powerful economy and a developed society with a responsibility towards minorities living among us.

Marriage and two years of living together are behind us. Despite the initial reaction, my parents’ views have changed quickly – usually all it takes to break down psychological barriers is to get to know the person. Learning Hebrew and starting a new career, my wife does her best to accustom to living here, which isn’t really that hard, considering that it’s a small price to pay for our happiness.

But coping with tribal mentality isn’t easy for someone who is so obviously an outsider – my wife’s Asian looks stir enough unhealthy curiosity and glances to make anyone uncomfortable.

In a world in which innovation and global economy increasingly transcend boundaries of nations and races, and cities and corporations compete for educated workforce, lured by high-quality life and freedom, it may be the first time that our tribal instincts get in the way of our future.