A friend of a friend told me about Startup Weekend a couple of days before the event. The same evening the tickets were sold out and I was out of luck. But instead of giving up on the whole thing, I did something else: I contacted the organizers and asked whether there are any tickets left. The answer was no, but I entered the waiting list. Next morning I got a message that someone canceled his participation, and I got the last ticket to the event. It was already worth the 175 shekel I paid: I learned a lesson in persistence.

I decided that while I am there, I might as well present an idea. I thought that it would be a good way to present myself. I have chosen an idea that just a week ago I declared dead. I have got some new insights from a  friend, and I thought that it might be a good opportunity to try to revive it.

Day 1
A couple of unnecessary lectures came before the main event of the day: presentation of the ideas. About 30 people lined up and waited for their 2 minute chance to present their idea and persuade their peers to work on it. The presenters couldn’t use PowerPoint, and had to rely on their public speaking abilities, which some times resulted in comic performances. I cheated a bit by preparing an album with the main points of the presentation. I received a warm reception – the audience was amused by the format. 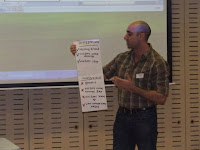 Most of the ideas could be grouped into 3 categories:

Accordingly, the people that presented were either 1) developers, 2) people without technological background or 3) people that thought about the idea on their way to the event.

After the presentations were over, people went to have dinner and to mingle with people whose ideas interested them. I got some traction and interest from people, though not as much as others. Since I came to the event more to meet people and soak the atmosphere than to promote the idea, I didn’t try too hard to push it. Eventually we had a team of 4 guys, a private room, a white board and an idea to work on. All in all, a good start. 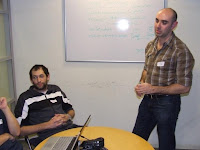 On the 2nd day of the competition, we started at 9 am, and worked our asses till 23 pm. We started with the most important thing – finding a catchy name for the project. ShopJet came up quickly, and we liked it. Than we divided the work between us into 4 chunks: back-end programming, front-end programming, front-end design and business analysis/research. We were enthusiastic, adequately  fed, and motivated by the hiatus of people, ideas and atmosphere that was flowing around us.

After the teams finished their presentations, the panel of judges, which consisted of VC’s, representatives from Google and IBM, announced the winning teams.
Luckily, we were one of the runner-ups, and we were thrilled about it. The judges said that while integration with the shops may prove more difficult than we think, there is no question about the fact that we solve a real need, and people will pay money for such solution.

The other runner-up was “PsyTech”, a team whose idea was to develop analysis tools that measure people’s personality traits, based on the way they use the keyboard- apparently there is some research on the subject. The intended market is companies’ HR departments, but I failed to see how they can persuade anyone to use such tools, without the research on the subject becoming much more substantial and mainstream.

The Winner was “Is/It”, a team whose idea was to develop a browser plugin that would let the user mark any sentence on any web page, and it would report back how credible this information is. Presumably, it would be the go-to fact-checker. While the judges thought that it is an interesting niche, they admitted that implementing such service would be very challenging.

So, all in all, it was an interesting experience, and mostly, an opportunity to meet people with the desire and ability to make ideas happen.

some press coverage:
The Marker
NewsGeek