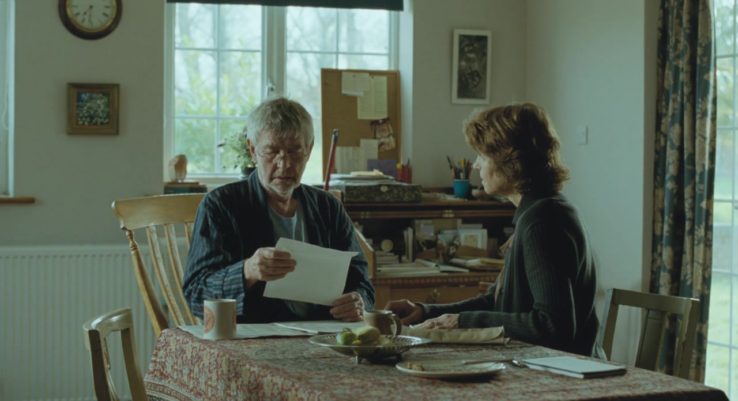 Kate and Geoff are an older married couple who are about to celebrate their 45th anniversary in a week. Then Geoff receives a letter, notifying him that his old girlfriend, who died in an accident in the Alps back in the 60s was found, her body frozen and preserved. Kate knew about the tragic death of her husband previous girlfriend – there are no secrets here to be revealed, no skeletons to be found – at least not in the usual sense. And yet, what starts as an innocent walk down the memory lane, gradually becomes an uncomfortable examination that gets both of them to question their life together.

The image of a body frozen in the ice becomes the symbolic core of the movie. For one, it stands for Geoff’s frozen and untouched attitude to his previous relationship. All the years that have passed since, he wasn’t able to develop a perspective. When thinking about Katya (notice the name), he isn’t a 70-year-old reminiscent of two young people whose intimacy was secured by the romance of the situation (he only remembers Katya in the context of their travels in Alps) and the breaking down of cultural boundaries (she was german). Instead, he thinks of her as a young man who is in love with a fantasy of a partner.

But it’s not only his attitude towards the remote past that is frozen. When thinking of the upcoming anniversary, Kate tells Geoff wistfully that it’s too bad they have so little photographs of their time together. “Whom would we photograph anyway?”, he replies, hinting to the fact that they don’t have children and grandchildren. But when later she climbs up the attic, she discovers heaps of old photographs of Katya, that Geoff has taken during their travels in the Alps. Was their life together a mere shadow, a pale projection of Geoff’s perfect fantasy?

But the movie isn’t just about relationships. More than anything, it’s about old age. It’s the youth that Geoff longs for (“the time when there were choices to be made”), and the lack of meaning that comes with old age devoid of people or things to care about, that he resents.

Even though Kate and Geoff are not very talkative (they are British after all), much is conveyed through the juxtaposition of small unusual behaviours onto their ordinary countryside life. The script and the acting in the movie are perfect, and together with Bergman’s “Scenes From the Marriage” and Woody Allen’s “Husbands and Wives”, it stands for me in the first line of movies about marriage.