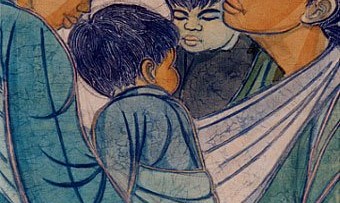 This may have been the longest year in my adult life but also probably the most memorable one. As our son just turned one recently, I thought it’s time to share some of the things I have learned and discovered about parenting during this year.

Our son is unique but not special

All children are unique – even at the age of several months each is already different in their life circumstances. Some have more available parents than others, some are happier than others by nature. But no one deserves more than others. Objectively our son doesn’t occupy some special place in the world and his destiny isn’t of special importance. I am in love with this little person and we’ll do a lot to ensure he has a happy childhood and hopefully grows up to be a decent man. But I don’t get parents that are willing to push their children above all the rest. Don’t they see that all of these kids are bound to end up together with each other in college, in work, in relationships, and that their mutual connectedness is way more real and important than any benefit that may come out of entitlement?

I didn’t notice or care about children, but now I do

Children were more or less like squirrels to me – sure I knew they existed, and if I rarely noticed them I would admit some of them are cute, but that wouldn’t last more than a fleeting moment, and then they would disappear from my world till the next time. But now children are visible to me – their little woes and  grievances, laughs and wonders are real to me. And in a small part I feel responsible for them. By becoming parents to our children in a way we become parents to all children. This isn’t just empathy or our tribal past in which children were a shared responsibility. You want your child to live in a world of good wishers, not of neutral strangers. You want him to find care and affection wherever he goes and to grow up in a world worthy of trust at least as much as suspicion. And that has to start with you.

The golden rule of parenting

Parenting is a battlefield of conflicting views and ideas. Everything from feeding (breastfeeding vs formula) to sleep (separate bed vs co-sleeping) is contentious. And although we have formed our own views on many of these issues, it would be presumptuous to think that at this point we absolutely know what’s best. But there is one meta-idea whose simple but crucial message drives to the core of every parenting decision and which makes it in my view the golden rule of parenting. It’s simple: acknowledge his needs, realize that they are legitimate and satisfy them.
Respond to your child needs –

It took me a while to realize that even though he is small, that doesn’t make his distress insignificant, and even though he is mostly unaware of himself that doesn’t mean that his feelings aren’t important. It’s really easy to discard the infant experience as unimportant, as something that needs to be managed rather than met. I was doing that all the time, and still often do. Fortunately Oxanna’s gentle and thoughtful approach showed me that there is a better way.

OK, that may sound absurd – how can you “trust” a one-year-old? Well I mean it in two ways:

I learned to trust the nature in him

In 9 months he still wasn’t crawling, and we were growing pretty anxious about it. But then one day, without any preliminary signs he suddenly started pushing himself and moving on his belly. And a few days later this little lizard was crawling around the house as if he was doing it all his life. This and several other similar occasions made me realize that his growth and development don’t depend on us coaching him. That he isn’t a passive spectator waiting to be taught everything and not a blank slate that needs to be filled. That he is actually a life force whose physical, emotional and mental growth is just waiting to burst out. An earthling, whose temporary helplessness conceals an innate capacity that is a result of millions of years of evolution. And so our role as parents, especially at this age is simply to provide a safe and engaging environment for him.

I learned to trust his temperament

Little children and infants often have a bad rep as unpredictable creatures capable of wreaking havoc on your plans. And not just due to unforeseen circumstances such as illness, but also because they are often whiny and capricious without any special reason. Well as far as I can judge from our own experience, that’s nonsense. We traveled with him for a month in Hong-Kong and Vietnam, we went with him for a week in Switzerland, we frequently hiked in Israel and had friends over at our place in numerous occasions. And every time we saw the same thing: that as long as he feels good and his needs are satisfied, he is a reliable companion . Of course children are different, and we are lucky to have a child who is naturally open to new experiences. But his good temper is not a given and it depends on many factors – on him getting enough sleep during day and night (orchestrating his sleep schedule is Oxanna’s hard-won accomplishment), being constantly close to us and getting lots of attention and affection, on us noticing and promptly satisfying his other basic needs, etc. Of course all the mood swings and tantrums are still ahead of us (“the terrible twos”), but still – discovering that we can usually find a reasonable explanation to his behavior and can rely on his cooperation was a big deal.

New challenges are ahead, only time will tell what those will be.