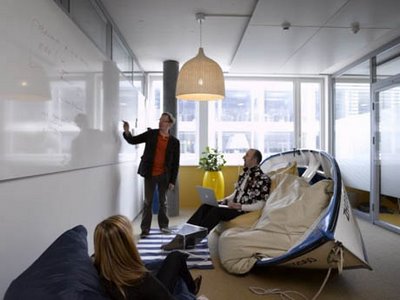 In my last post I talked about the evolution of man – from the blindly ambitious traditional man of the past, to the cynical and bored modern man of the present to the examining and harmonious conscious man of the near future.

But man has always achieved progress and development by joining a collective and through it applying himself to pursue larger goals. Inevitably, the transformation of man has to lead to a transformation of his work place.

The 19th century traditional man applied himself through the government. Patriotic, conforming and culturally ethnocentric, he served his God and king with loyalty and self-sacrifice. The economic aspirations of governments lead to colonialism and imperialism which contributed to the prosperity of the developed nations, while brutally savaging the subordinated lands and people. Since truth and goodness were so obviously on his side, the traditional man took this to be the natural order of things.

The 20th century’s modern man’s vessel of prosperity is the corporation. Devoid of any values, other than those that promote productivity, the corporation is focused on profits. It suites modern man’s disillusion with ideology, truth or belief. The advancement in communications and information technologies and the forces of globalization brought cheap consumer products to almost anyone on the globe. In the process, they gave birth the multinational corporations, whose wealth and influence rivals those of many nations, but whose practices often bring unethical work conditions in poorer countries and unsustainable practices of natural resources consumption and waste disposal.

The corporation can no longer satisfy the conscious man’s need for meaning, authenticity, social justice and sustainability. Moreover, the information age brought to every worker the ability to own the means of production (namely laptop and Internet connectivity). As a result, businesses, governments and NGO’s have to adapt to new rules of engagement with employees and customers. They have to make place for “the conscious organization”.

As technology becomes increasingly commoditized, global competition brings the prices down and the differentiation is more difficult to achieve, the only viable way for a business to succeed is to become more human: focus on a significantly better customer service, have simpler, more transparent policies, foster creativity and innovation instead or relying on rigid processes.

A more human organization needs more human employees. Instead of the by-the-book, manual-rehearsing, sleepwalking cogs, that wait for the day to end, and are eager to delegate responsibility, The conscious organization depends on conscious employees: those that bring themselves fully to their work emotionally and intellectually (instead of just their old-learned skills), that take initiative and solve problems (instead of simply not caring or delegating), that believe that what they do is important (instead of just doing it for the paycheck).

Zappos, the immensely successful online shoes company offers to send you any pair of shoes for you to try, and return it anytime during a year, if you aren’t satisfied. Their customer service is legendary, and so are their HR practices.

The advancement of the Internet and the Social Media gives every customer a voice that allows him to tell the world about his experience with the business. This brings the last employees (and usually the most underpaid ones) – those that deal with the customer, to the front-end of the business. Every encounter with a customer is either an opportunity to shine or a PR crisis. The customer can’t be viewed anymore as a necessary nuisance – he has to feel that his requests and complaints are taken seriously, and he expects a real human taking care of him, not automated emails.

The success of Twitter with corporate America is a clear sign that companies try to find a way to become more personal and in-touch with the customer.

The conscious man strives for his work to provide him not only with financial stability and social belonging but not less importantly with meaning and purpose. That’s not a whim – a man who looks for meaning in his personal life, should be expected to look for it in his work as well.  Moreover, people who are intrinsically motivated are significantly more productive than those that are motivated only by financial gain. People need to believe that what they do is important, and companies must authentically provide that sense of meaning.

Since The Conscious Man expects his work to be the extension of himself, it means that the conscious organization can’t be neutral anymore in a social and political context, as the corporation strives to be. The conscious organization has to take stance and expose its values in action, by supporting the struggle of the oppressed, by advocating human-rights, by promoting freedom, by leading social change.

Google’s decision to stop censoring its search results in China showcases its belief in freedom and willingness to stick by it despite obvious damage to its profit bottom-line.

It’s not a passing fad – being environmentally friendly is no longer an option one can choose to ignore. When employees and customers become increasingly conscious of the effect of their actions on the environment, it’s a sound business practice to strive for minimal impact. Organizations that choose to ignore this, risk their reputation and ultimately their shares price.